Some Iranian protesters celebrated the US victory over Iran in the World Cup on November 29. Iranians in Alborz, Kermanshah, Kurdistan, and Tehran provinces, among other locations, cheered and gathered during and after the match in opposition to the Iranian national team.[i] Some reportedly launched fireworks in Saghez, Kurdistan Province after the American team scored a goal.[ii] CTP cannot assess how widespread this sentiment may be among Iranian protesters, but the reported celebrations indicate how politicized the Iranian national soccer team has become among at least some protesters. Iranian citizens cheering a US victory over Iran underscores the depth of popular frustration against the regime.

The Islamic Revolutionary Guards Corps (IRGC) and its proxies in Iraq threatened on November 29 to incite conflict and unrest in Saudi Arabia—especially among the Shia population—likely in retaliation for the alleged Saudi role in stoking protests in Iran. An IRGC-affiliated Telegram channel accused the Saudi government of planning to suppress Shia culture and identity on Tarout Island—an island off the Saudi coast in the Persian Gulf.[iii] The Telegram channel reported that Tarout Island is predominantly Shia. Iranian proxy Kataib Hezbollah furthermore called for regional countries ”victimized” by Saudi Arabia “to transfer conflict from their countries to the streets of Riyadh.”[iv]

At least nine protests took place in eight cities across seven provinces on November 29. The World Cup match may have reduced protest activity due to many Iranians likely watching the match. CTP assesses with moderate to high confidence that protests occurred in the following locations:

CTP assesses with low confidence that protests occurred in the following locations on November 29: 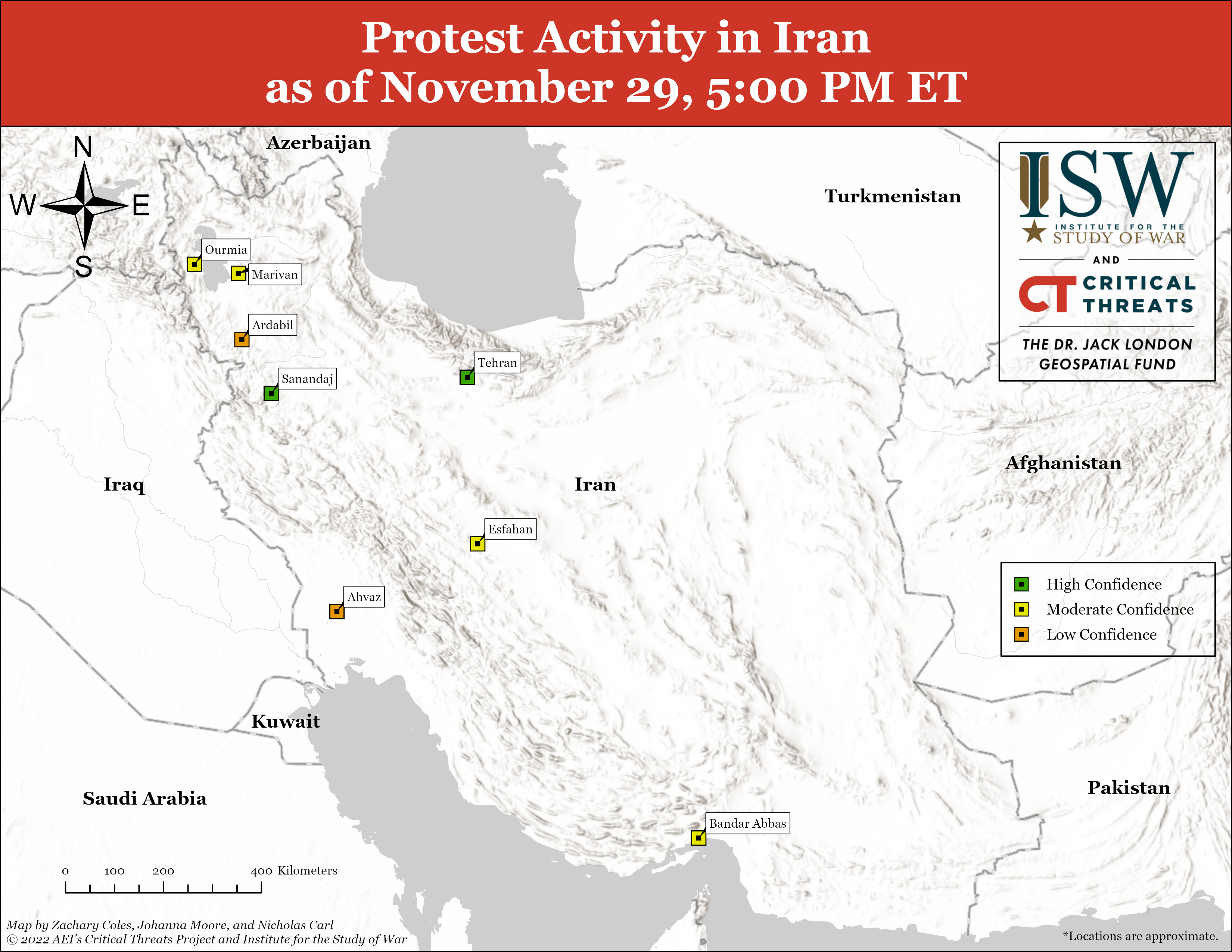 Prominent Sunni cleric Moulana Abdol Hamid continues to inspire public displays of dissent in the Iranian Sunni population. Dozens of local Sunni religious leaders and scholars from Khash, Mirjaveh, and Taftan, Sistan and Baluchistan Province issued a video statement on November 28 criticizing the regime protest crackdown.[xiv] The individuals expressed support for Abdol Hamid.[xv] This video statement is similar to previous video statements published by Sunni leaders in Kurdistan Province in recent days.[xvi] It is unclear whether these events are related, but some Sunni Kurdish clerics and religious leaders in their video statements have echoed Abdol Hamid, calling for a referendum on the Islamic Republic.[xvii]

Unidentified individuals killed a local clerical leader in a village near Mehrestan, Sistan and Baluchistan Province on November 28.[xviii] Iranian state media reported that the death of the cleric was related to a tribal dispute.

A Basij member died due to an unspecified cause around Saravan, Sistan and Baluchistan Province on November 29.[xix] Anti-regime militants commonly operate around Saravan and may have killed the Basij member. Around 60 security personnel have died since the protests began on September 16.[xx]

Iranian President Ebrahim Raisi praised Qatar for “respecting Islamic values” while hosting the World Cup during a phone call with Qatari Emir Tamim bin Hamad Al Thani on November 28.[xxii] Iran has coordinated with Qatar to suppress public acts of dissent by Iranians in Doha during the World Cup, as CTP has previously reported.[xxiii]