Protests continued but did not surge across Iran on November 24 and 25 despite calls for protests. Protest coordinators and organizations called for countrywide demonstrations from November 24-26 in solidarity with the protesters in Kurdistan Province.[i] Some protest organizations requested that protesters congregate on the main streets in each city, possibly to demonstrate large crowd sizes. It is unclear why these calls did not materialize. Security forces may have successfully preempted the planned protests, concentrating security personnel along the main streets and thereby deterring protesters, though CTP cannot corroborate this hypothesis at this time. CTP previously argued that the nature of the planned protests increased the risk to protesters because the advance notice gave the regime time to prepare and a single set of locations at which to concentrate security personnel.[ii] The scattered nature of the protests throughout most of this wave has strained security forces’ limited bandwidth.

The regime’s protest crackdown and abuse of arrested demonstrators will alienate large swaths of the population and entrench anti-regime sentiment throughout Iran for decades. US-based NGO Human Rights Activists in Iran (HRAI) estimated on November 25 that the regime has arrested over 18,000 protesters thus far.[iii] HRAI estimated that 110 of these arrested protesters are children and teenagers. These numbers, if true, are significantly greater than those from previous major protest waves in Iran. The regime arrested around 4,000 protesters during the 2009 Green Movement and around 8,000 during the 2019 Bloody Aban protests.[iv] CNN published a report on November 21 detailing the horrific acts of sexual assault and violence the regime is committing against arrested protesters.[v] A young Iranian protester told NPR on November 23 that she would prefer that the regime killed her rather than arresting her.[vi] These horrible abuses will continually fuel anger and resentment toward this regime, underscoring the long-term challenge the Islamic Republic is creating for itself by the brutality it is using to oppress these protesters. 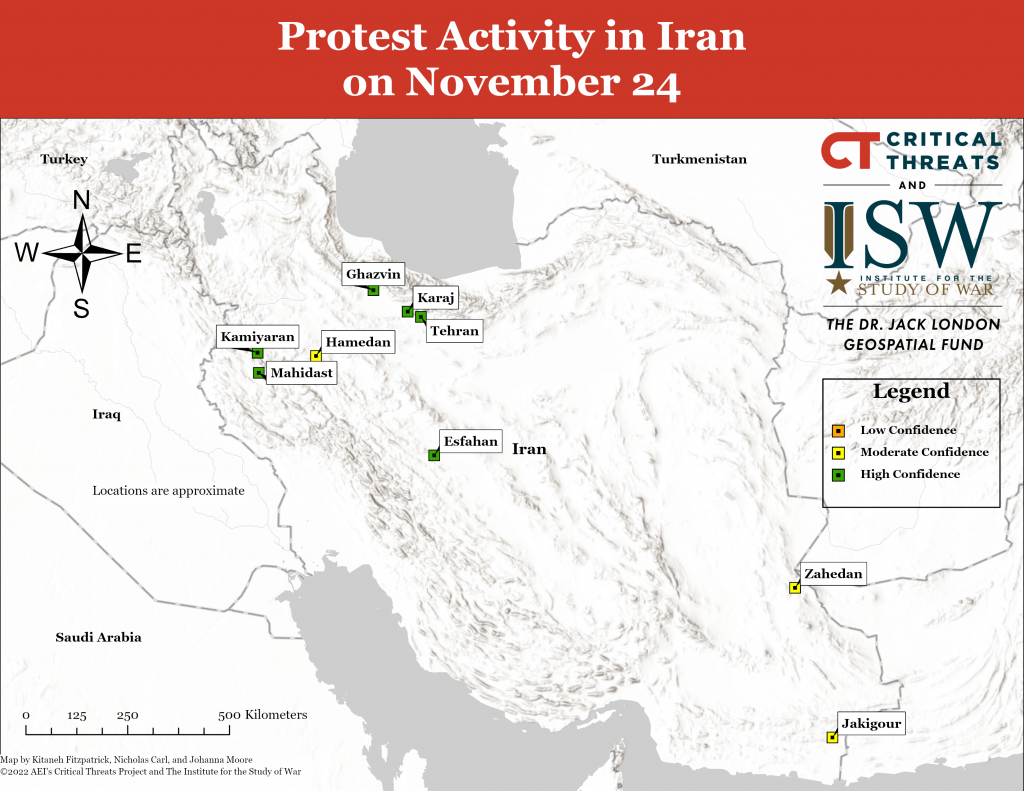 CTP assesses with high to moderate confidence that protests occurred in the following locations on November 25: 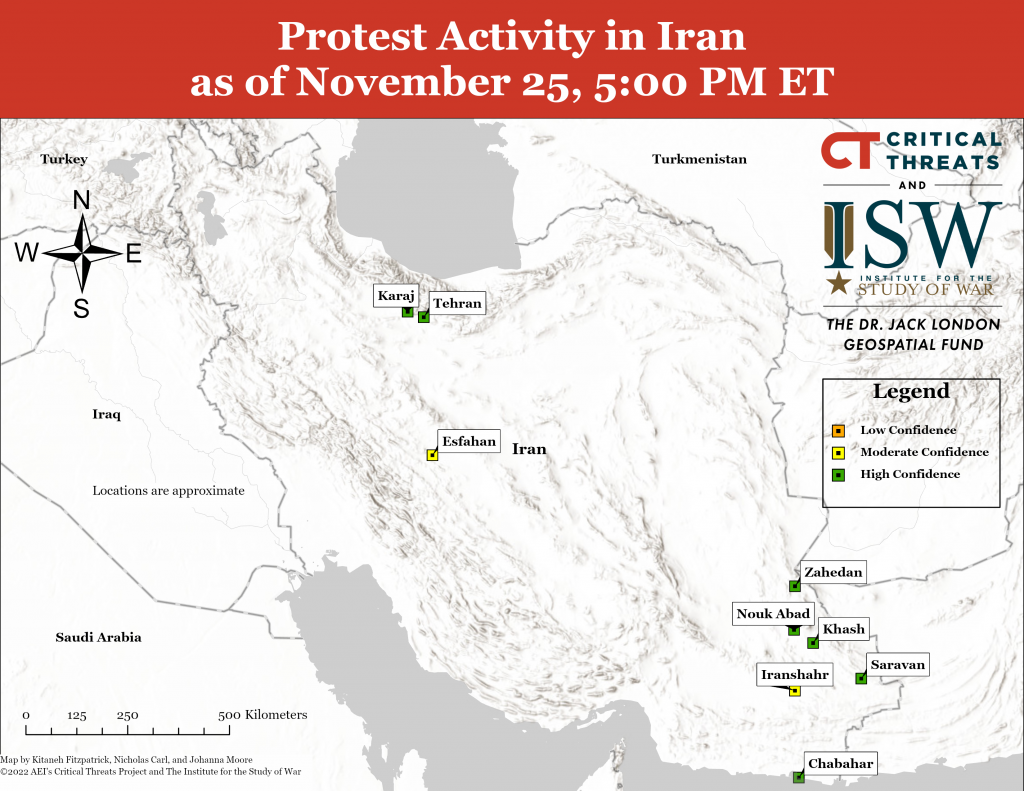 Citizens in Mazandaran Province sent medical supplies to protesters in Kurdistan Province on November 24, according to Radio Farda.[xxxii] This support reflects how at least some protesters are aiding and likely cooperating with one another throughout the country to resist the regime crackdown. Protesters have established an informal medical care network for injured demonstrators in recent weeks, as CTP previously reported.[xxxiii] These kinds of interactions could provide a foundation for greater cooperation among protesters across Iran.

IRGC Intelligence Organization Deputy Chief Brigadier General Mehdi Sayyari accused the US of leveraging popular economic frustrations to stoke protests on November 24.[xxxv] Regime officials frequently accuse the US of using economic and psychological means to incite unrest. Growing regime attention on how economic shortcomings facilitate protests could place greater internal pressure on President Ebrahim Raisi and his administration to improve the economy. The Raisi administration cannot implement the necessary reform to meaningfully improve the economy, however, due to structural flaws and the IRGC’s monopoly in various sectors.

Reformist Zahra Rahnavard published a statement on November 24 criticizing the regime crackdown.[xxxvi] Rahnavard demanded that the regime “either kill me or surrender to the will of the people.” Rahnavard is married to reformist leader Mir Hossein Mousavi, who previously criticized the crackdown and expressed support for the protesters on October 1.[xxxvii]

Prominent Sunni cleric Moulana Abdol Hamid continued to inspire protests throughout Sistan and Baluchistan Province on November 25.[xxxviii] Abdol Hamid reiterated his criticisms of the regime crackdown during his weekly Friday sermon. He also expressed solidarity with Kurdish protesters in northwestern and western Iran, against whom the regime has deployed the IRGC Ground Forces. Protests occurred in at least six cities in Sistan and Baluchistan Province on November 25. Abdol Hamid’s anti-regime message could increasingly resonate with Sunnis and other protesters in northwestern and western Iran, as CTP previously assessed.[xxxix] 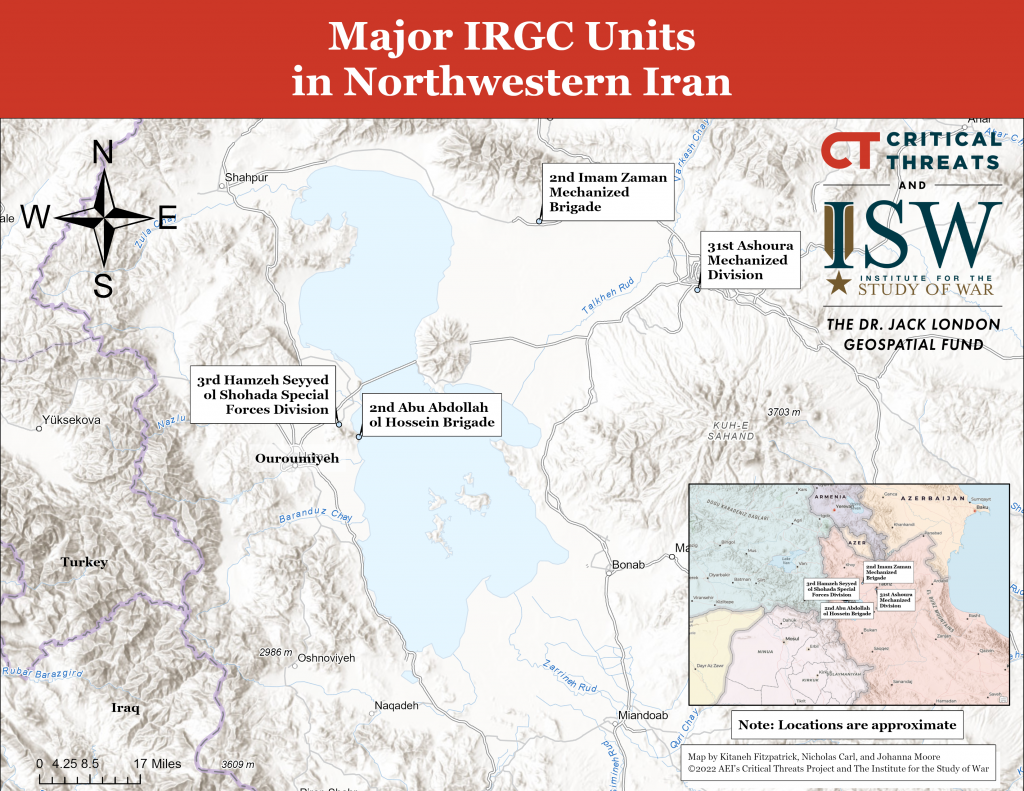