Iran is signaling its readiness to attack Saudi Arabia and possibly Erbil ostensibly in retaliation for the Shiraz terror attack but primarily for the alleged role of the US, Israel, and Saudi Arabia in stoking protests. The regime raised the red flag of Imam Hossein above the Shah Cheragh Mosque—the target of the terror attack—in Shiraz, Fars Province on October 30.[i] The red flag represents revenge for an unjust death in Shia Islamic tradition. The regime takes down the flag once it has taken revenge. The regime raised the red flag last in Qom after the US killed Qassem Soleimani and before the Islamic Revolutionary Guards Corps (IRGC) conducted a ballistic missile attack on US forces in Iraq in January 2020.[ii] IRGC Telegram channels posted videos depicting a hypothetical Iranian drone attack on Saudi energy infrastructure on November 2.[iii]

An Iranian proxy Telegram channel recirculated on November 2 the Iran International report claiming that the regime flew around 150 proxy fighters from Baghdad to Mashhad to suppress protests.[iv] Iran International claimed on November 1 that the regime sent fighters from Kataib Hezbollah and other unspecified Iraqi militias.[v] The Iranian proxy account reported that the regime also flew in personnel from Harakat Hezbollah al Nujaba and did not deny the reports. The IRGC Quds Force used Kataib Hezbollah and Harakat Hezbollah al Nujaba extensively in its military intervention into Syria to defend the Assad regime.[vi]

At least 22 protests took place in 14 cities across nine provinces on November 2. CTP has begun adding approximate populations to cities and towns in which protests occurred to track the degree to which the movement shifts between large urban areas and small towns and villages. Population data is drawn from the 2016 census.[vii] CTP assesses with moderate to high confidence that protests occurred in the following locations: 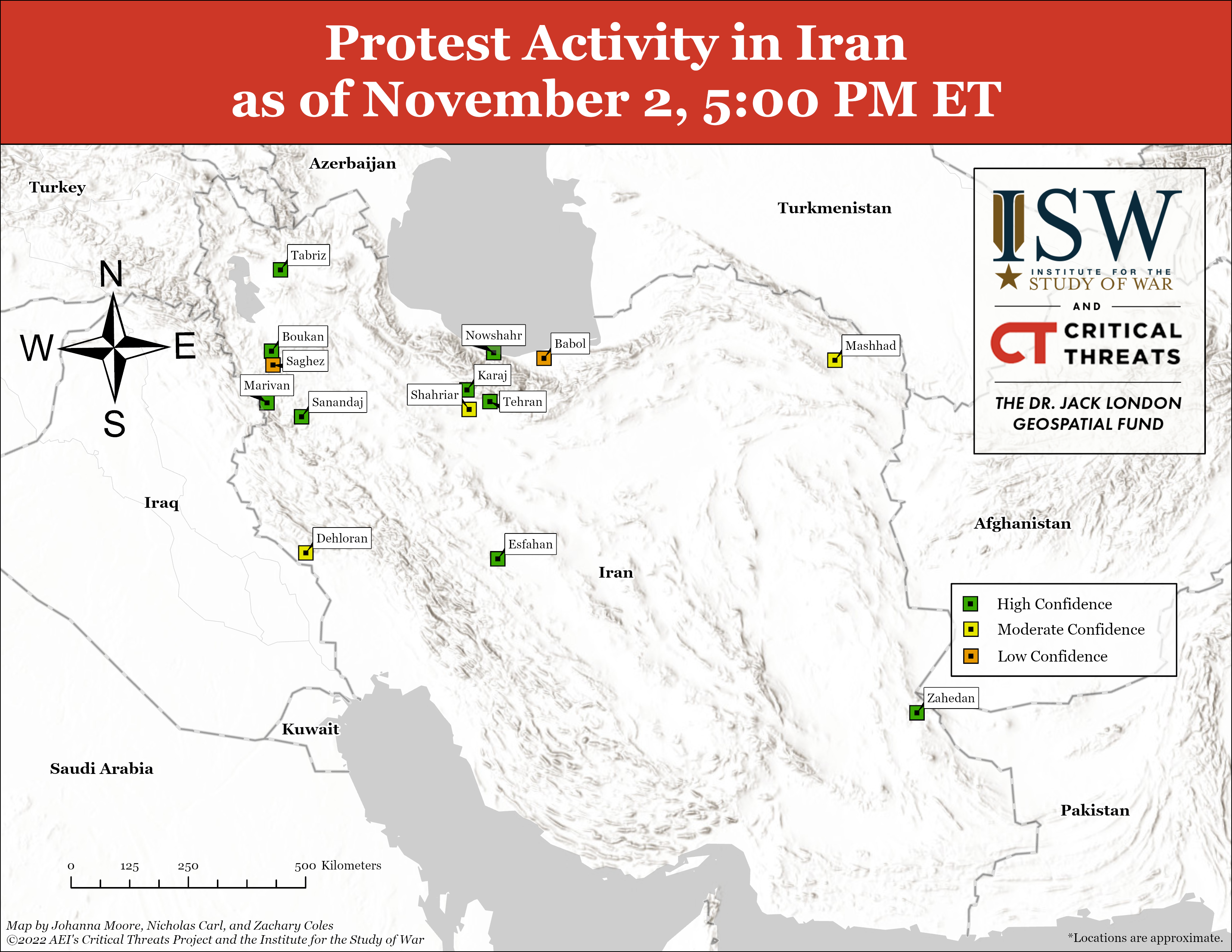 Social media accounts reported that security forces conducted psychological operations in Tehran to deter and intimidate protesters on October 31. Security personnel fired sound bombs around residential areas.[xxxii] A security officer threatened protesters over a loudspeaker, stating that “we would even behead our own wives and children if necessary.”[xxxiii]

Supreme Leader Ali Khamenei reiterated his claims that the West and Israel are stoking the protests in a speech to a group of university students on November 2.[xxxiv] Khamenei described the protests as part of the Western-Israeli hybrid war against Iran. Khamenei made his first explicit accusation that the US is waging a hybrid war against Iran in February 2022, though his advisors have made similar claims for many years.[xxxv] Khamenei spent most of his speech criticizing the US and arguing that Washington has always sought to undermine the Islamic Republic. Khamenei continues to avoid addressing citizens’ popular grievances.

Parliamentarian Mohammad Saleh Jokar accused the Iranian diaspora of organizing terrorist attacks in Iran and called for their punishment on November 2.[xxxvi] Jokar proposed revoking the citizenship of Iranians living abroad who instigated protests. Jokar is a former IRGC member who has historically supported harsh protest crackdowns.[xxxvii] The EU sanctioned Jokar in 2011 over human rights abuses.[xxxviii]

Kurdistan Chief Provincial Justice Hossein Hosseini announced on November 2 the seizure of a cache of 49 hand grenades in Baneh, Kurdistan Province.[xxxix] Hosseini also announced the arrest of two individuals related to the case and stated that they smuggled the grenades into Iran. Anti-regime Kurdish militancy and smuggling is common around Baneh, which is close to the Iran-Iraq border.

Unidentified individuals shot at a Law Enforcement Command (LEC) station in Khash, Sistan and Baluchistan Province on November 2, injuring one police officer.[xl] Anti-regime protests and attacks have occurred in the areas surrounding Khash in recent weeks, which CTP has closely reported. Large-scale protests occurred in Zahedan throughout October 2022.[xli] Unidentified individuals killed an LEC officer in nearby Iranshahr on October 30.[xlii]

Pakistani Baloch tribal leader Malik Munir Sheikh Husseini released a video statement condemning the Iranian regime for its violent suppression of protesters in Sistan and Baluchistan Province.[xlv] Sheikh Husseini is based in Quetta, Pakistan, where the Afghan Taliban and various Baloch militant organizations have a presence.[xlvi] Husseini’s rhetoric could stoke attacks against the regime from anti-regime militants operating in Pakistan.