Protest activity increased significantly on November 15 to commemorate the three-year anniversary of the regime’s brutal crackdown on the Bloody Aban protest wave. These current protests are the most reported in a single day since CTP began publishing daily updates on September 28.[i] Protest coordinators and organizations have called for protesters to sustain these demonstrations across Iran on November 16 and 17.[ii] Protesters continue to demonstrate an extremely impressive amount of courage and determination despite the regime’s brutality and expanding censorship. Iranian political and security leaders likely expected their use of force to quickly quell the protests after a few weeks as they did in November 2019 and other previous protest movements.[iii]

The regime’s abuse and mistreatment of children is likely one of the factors driving these enduring protests. The New York Times published an article on November 14 detailing human rights violations that the regime is committing against arrested children.[iv] Security forces have killed at least 43 children in their crackdown as well.[v] The extent of the regime’s cruelty toward children may be new information to many observers in the West but is likely not to the Iranian protesters.

The Islamic Revolutionary Guards Corps (IRGC) will likely resume its campaign to expel US military forces from the region in the coming months. IRGC Quds Force Commander Brigadier General Esmail Ghaani traveled to Baghdad on November 15 to meet with senior Iraqi political and proxy leaders.[vi] These Iraqi officials included President Abdul Latif Rashid and Prime Minister Mohammad Shia al Sudani. Ghaani discussed the presence of US troops in Iraq and the Iranian drone and missile attacks into Iraqi Kurdistan, among other issues.[vii] Forcing the American military from the region is one of Tehran’s greatest strategic objectives, and the installment of an Iran-friendly government in Baghdad will likely facilitate this effort. The IRGC will likely organize militia attacks against US positions and pressure Iraqi officials to seek the exit of American troops in new rounds of the Washington-Baghdad strategic dialogue. The perceived role of the US in stoking the protests and supporting anti-regime Kurdish militant groups in Iraqi Kurdistan may increase the urgency Iranian leaders assign to this effort. 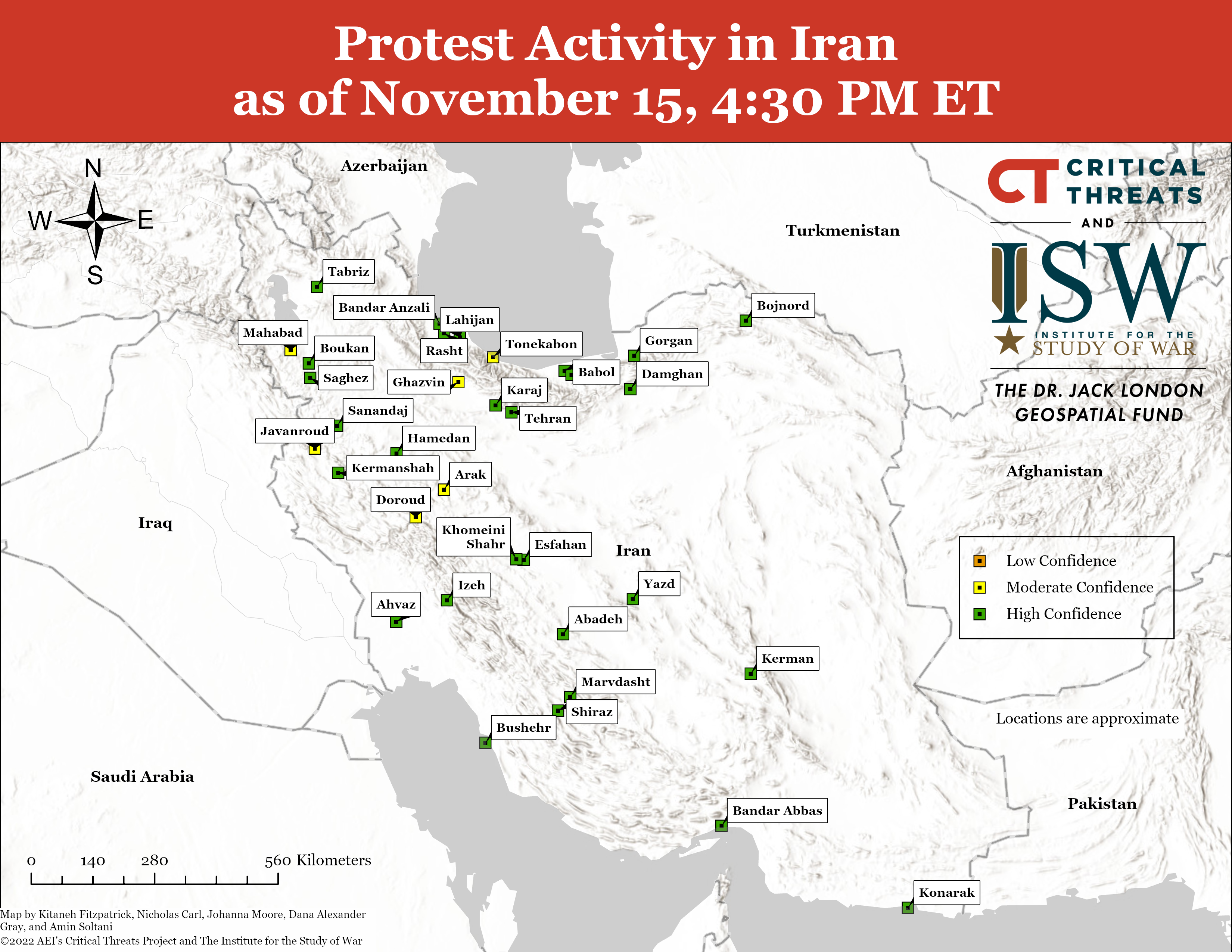 At least 54 protests took place in 36 cities across 24 provinces on November 15, a significant increase from prior days. CTP assesses with moderate to high confidence that protests occurred in the locations below

Three security personnel may have died in the protests on November 15. Iranian state media reported the protesters shot an IRGC colonel in Boukan, West Azerbaijan Province and another IRGC member in Kamyaran, Kurdistan Province.[xcvi] Protesters also reportedly killed a Basij member with a Molotov cocktail in Shiraz, Fars Province.[xcvii]

President Ebrahim Raisi sent First Vice President Mohammad Mokhber to Qom on November 15 likely to unite influential clerics behind the regime and especially the Raisi administration.[xcviii] Mokhber met with senior religious leaders to discuss economic and social issues.[xcix] Mokhber’s meetings come amid reports of disagreements within the clerical establishment over the regime protest crackdown, which CTP has reported previously.[c] The Iranian clerical establishment is a core constituency of the Islamic Republic but is notably not a monolith nor do its leaders universally support regime policies.

Judiciary Chief Gholam Hossein Mohseni Ejei stated that citizens may constructively criticize the regime so long as they “do not insult, humiliate, and destroy” on November 15.[ci] Ejei also emphasized the importance of “explanatory jihad,” which refers to the regime communicating its ideology and narratives to Iranian youth to fight against the United States’ “soft war.”[cii] The Iranians use this term, “soft war,” to refer to the West’s perceived use of nonmilitary means, such as economic and psychological pressure and information operations, to erode the regime’s legitimacy, cultivate domestic opposition, and propagate Western values in Iran.