The ongoing protests are creating fractures within the Iranian hardliner camp. Parliament Speaker Mohammad Bagher Ghalibaf and his inner circle have clashed politically with other hardliners who have taken harsher stances against the protests, according to Iranian media.[i] Ghalibaf and his inner circle have blamed these hardliners—specifically Saeed Jalili and others in the Stability Front party—for stoking unrest among disaffected Iranian youth.[ii] Jalili was the secretary of Iran’s Supreme National Security Council from 2007 to 2013. One parliamentarian reportedly close to Ghalibaf wrote an op-ed accusing parliamentarians close to Jalili of having inflexible and uncompromising views and calling media affiliated with the Islamic Revolutionary Guards Corps (IRGC) “harsh and violent“ on October 25. Ghalibaf endorsed economic and sociopolitical reform in a parliamentary address on November 5, describing changes made within the parameters of the Islamic Republic as “legitimate and necessary.”[iii] Ghalibaf likely seeks to use such promises of reform to placate protesters. Ghalibaf will not likely support meaningful political reform, however.

Some senior Raisi administration officials have similarly called for limited political reform in recent days likely to appease protesters. Cultural Heritage, Tourism, and Handicrafts Minister Ezzatollah Zarghami suggested that the regime could lift mandatory veiling laws without damaging the foundation of the Islamic Republic on November 6.[iv] He also expressed implicit support for easing censorship laws and internet restrictions and acknowledged that many Iranians do not trust state media. Zarghami previously headed state-run media conglomerate Islamic Republic of Iran Broadcasting. Raisi administration spokesperson Ali Bahadori Jahromi stressed the importance of political plurality in a meeting with university students and faculty in Mashhad on November 10, although he did not explicitly endorse reform.[v] President Ebrahim Raisi has yet to show any support for meaningful reform, and it is unclear whether there are divisions between him and some of his cabinet members. It is also unclear to what extent these cabinet members align with Ghalibaf and his inner circle. Supreme Leader Ali Khamenei is nevertheless unlikely to concede on political reform.

These parliamentarians may attempt to exploit the regime’s violent protest suppression response and fissures within the hardline camp to increase their political capital within their communities. These officials’ local connections to the marginalized communities where the regime has used the most force in its crackdown may be driving this wedge between them and the political establishment. Rahmini is a hardliner as well, further reflecting division within the hardline camp over how to manage the crackdown.

At least six protests took place in five cities across four provinces on November 10. Protest activity will likely increase on November 11. Protest organizations have called for protests through Iran and especially in Zahedan, Sistan and Baluchistan Province, following Friday prayer sermons on November 11.[ix] CTP assesses with moderate to high confidence that protests occurred in the locations below. 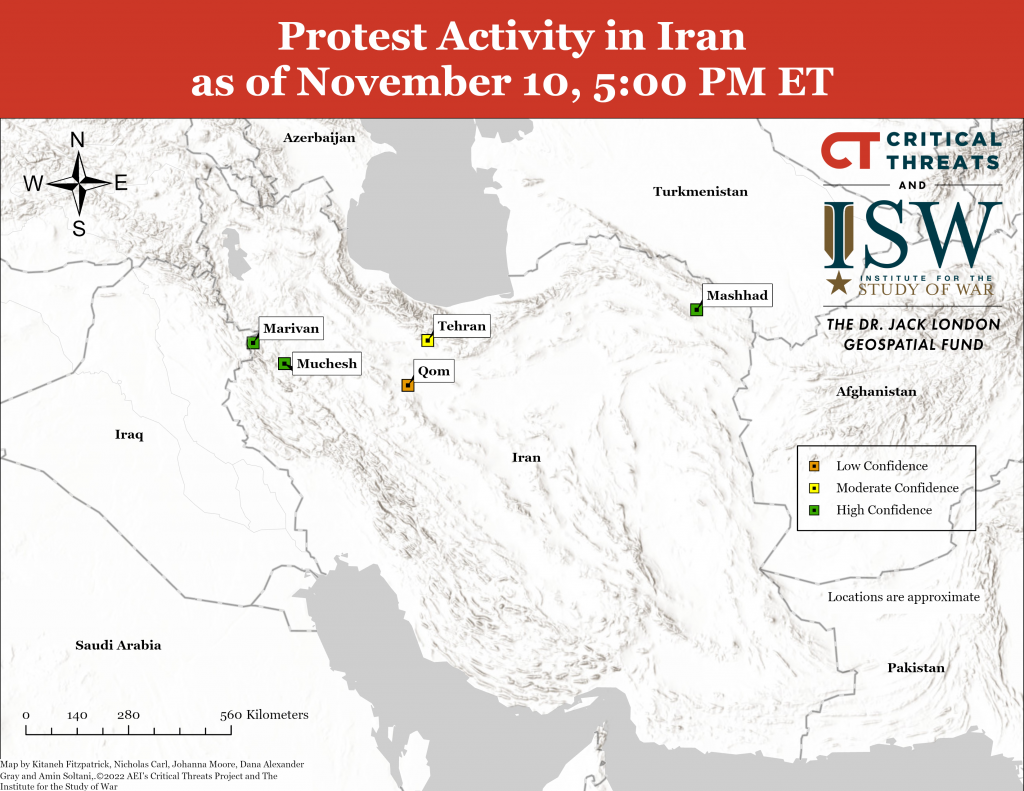 Intelligence and Security Minister Esmail Khatib stated that foreign agents sought to spread protests throughout different parts of Iranian cities and thereby stretch security forces thin on November 9.[xvi] Khatib’s remark accords with CTP’s previous reporting that the extent and scale of the protests have strained the limited bandwidth of security forces.[xvii]

Security forces lethally suppressed crowds dancing in a public area in Rasht, Gilan Province. Social media footage shows men and some unveiled women dancing together at an unidentified public square in Rasht on November 10.[xviii] Iranian security forces reportedly violently dispersed crowds using tear gas, ran over some participants with motorcycles, and shot and killed one woman.[xix] CTP has found no indication that the crowd was engaged in protest-related activity apart from the women not wearing hijab.

IRGC Ground Forces Commander Brigadier General Mohammad Pak Pour met with Shia and Sunni leaders at an undisclosed location in Sistan and Baluchistan Province on November 10 likely as part of regime preparations to suppress planned protests.[xxv] Pak Pour called on the Shia and Sunni leaders to promote security in the province and prevent the internet from influencing Iranian youth. Pak Pour also warned protesters from threatening public order and security.

Pak Pour traveled to Sistan and Baluchistan Province likely to prepare security forces to suppress planned protests across Iran and especially in Zahedan on November 11.[xxvi] Protests have erupted every Friday in Sistan and Baluchistan Province since the regime crackdown in Zahedan on September 30.[xxvii] Anti-regime militancy has increased in recent days as well.[xxviii] Social media accounts reported an increased presence of security forces in Zahedan on November 10.[xxix] The 110th Salman Farsi Independent Special Forces Brigade is headquartered in Zahedan and could deploy to use extreme force against protesters if Iranian leaders decided to do so.[xxx]

A group called the “Anonymous Graves of Baluchistan” claimed a lethal drive-by-shooting on an IRGC truck in vicinity of Zahedan, Sistan and Baluchistan Province on November 9.[xxxi] The group alleged that the attack killed two IRGC members.[xxxii] The group has claimed six attacks since April 2022.[xxxiii]

Social media accounts reported that hundreds of citizens protested against the Saudi government in Qatif, Saudi Arabia on November 10.[xxxiv] The population of Qatif is primarily Shia. CTP cannot verify the social media reports of protests.