The organizational structure of the protest movement is continuing to evolve and morph as its leaders try to cohere the movement. Several different umbrella organizations for the smaller protest groups have emerged in recent months. These umbrella organizations include the Iranian Neighborhood Youth Union (INYU) and the similarly named Iranian Neighborhood United Front (INUF), among others. The INYU and INUF have both circulated lists of their members in recent days, highlighting how some protest groups belong to both umbrella organizations, and other protest groups belong to only one.[i] This apparent disunity may indicate that different protest leaders are vying for influence within the movement. This possibly internal struggle is a somewhat natural consequence of the growing cohesion within the protest movement. It does not mean that the protest movement is irrevocably divided but is a challenge protest leaders must overcome.

Parliament Speaker Mohammad Bagher Ghalibaf and Judiciary Chief Gholam Hossein Mohseni Ejei have both expressed concern about the Iranian economy in recent days, possibly indicating their doubts that President Ebrahim Raisi can improve the economic situation. Ghalibaf stated that he is trying to reach a consensus within the regime on “modernizing regime governance” to solve economic issues.[ii] Ghalibaf praised Raisi for replacing the Central Bank of Iran governor on December 29 but added that further “structural, policymaking, and managerial reforms” are necessary. Ejei similarly stated that the regime does not have a coherent economic plan.[iii] The Iranian rial has depreciated significantly in recent months, and social media users have claimed that some Iranian banks do not have enough hard currency for cash withdrawals.[iv] Ghalibaf’s and Ejei’s comments follow previous reports of frustration with the Raisi administration. The Fars News Agency bulletin that leaked in November 2022 reported that Ghalibaf told Supreme Leader Ali Khamenei that the Raisi administration is indecisive and unorganized.[v]

Unidentified individuals shot and killed an IRGC member outside his home in Tehran Province on January 3.[vi] The IRGC commanded local Basij members in his neighborhood. Around 73 security personnel have died since the protests began in September 2022.[vii]

At least two protests took place in two cities across two provinces on January 3. CTP assesses with low confidence that protests occurred in the following locations: 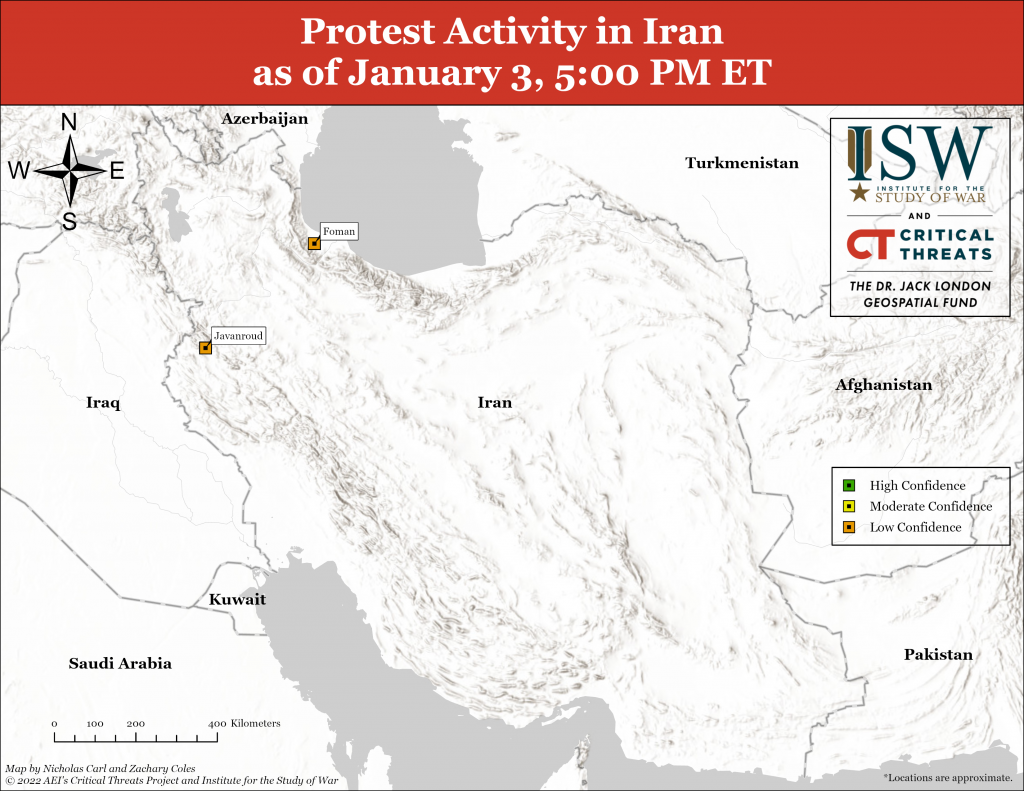 The Law Enforcement Command (LEC) clashed with an armed “terrorist team” in Sistan and Baluchistan Province on January 3.[xii] The LEC reported that it has arrested the gunmen and accused them of attacking police patrols in recent weeks.

The IRGC Intelligence Organization seized 700 kilograms of explosive materials in Gharchak, Tehran Province, on January 3.[xiii] The IRGC Intelligence Organization also arrested an individual during the seizure. The explosive materials included lead oxide and aluminum powder, which the BBC reported is commonly used to produce homemade fireworks in Iran. Protesters have used these materials to produce rudimentary hand grenades as well.[xiv]

An explosion occurred at a steel factory in Garmsar, Semnan Province, on January 3.[xv] The explosion killed one and injured five.

Lebanese Hezbollah Secretary General Hassan Nasrallah delivered a speech to commemorate the third anniversary of the US killing Qassem Soleimani.[xxiii] He offered reassurances that he has recovered after canceling a speech on December 30 due to health concerns.

Iranian proxies in Iraq and Syria did not attack US forces on the three-year anniversary of the US killing Qassem Soleimani.