The Iranian state security services have intensified their protest crackdown and social oppression in recent days. Security forces have substantially increased their presence in some cities, such as Javanroud and Semirom, according to social media users, after significant protests occurred there on December 31.[1] The Khuzestan Neighborhood Youth similarly reported that security forces disrupted electricity and telephone lines and shot at citizens in Izeh on January 1.[2] The regime has escalated efforts to reimpose social control as well. Security forces have arrested two reformist journalists in recent days and resumed using surveillance cameras to identify women not properly adhering to the mandatory hijab law in cars.[3]

The regime is likely escalating out of concern that protests are reigniting. Demonstrations saw a relative spike from December 29-31 compared to recent weeks.[4] Protest coordinators and organizations furthermore have called for countrywide demonstrations and strikes on January 6-8 to commemorate the three-year anniversary of the Islamic Revolutionary Guards Corps (IRGC) shooting down a Ukrainian civil airplane.[5]

This regime escalation could tire security forces ahead of the planned protests and strikes on January 6-8. The regime is seemingly struggling to secure small towns, such as Izeh, Javanroud, and Semirom, and has deployed a large number of security forces to these locations. One social media account claimed, for instance, that 1,000 officers from the Law Enforcement Command (LEC) Special Units deployed to Semirom, although this number could be an exaggeration.[6] The regime commonly shuffles its security forces around Iran to wherever they are needed most—typically major cities and the restive border regions--because it does not have enough forces to cover the entire country.[7] The regime will likely redeploy some—if not most—of the security personnel in Izeh, Javanroud, and Semirom to other locations ahead of the planned January 6-8 protests and strikes, likely tiring these forces in the process and possibly straining their morale. LEC Tehran Provincial Commander Brigadier General Hossein Rahimi denied that police personnel are experiencing fatigue or low morale on January 2—comments which suggest that the security forces are indeed facing these issues, occasioning Rahimi’s denial.[8]

One IRGC member died and three other members were injured during protests in Semirom, Esfahan Province on December 31.[9] Protesters gathered in front of a local government building and lit fires in the street in Semirom on December 31, as CTP previously reported.[10] Around 72 security officers have died since the protests began in September 2022.[11]

The IRGC or its foreign proxies could attack US positions in Iraq and Syria in the days surrounding the three-year anniversary of the US killing Qassem Soleimani and Abu Mehdi al Muhandis. The IRGC and its proxies have organized attacks during the previous anniversaries in recent years. The IRGC released a statement on January 2 reiterating its pledge to avenge Soleimani.[12] Other senior Iranian military officers and proxy outlets echoed these threats on January 2.[13] Iraqi protesters gathered in Baghdad to commemorate the anniversary as well.[14] Social media users reported that Iranian proxies in Iraq planned to coordinate protests in front of the US Embassy in Baghdad, although CTP cannot corroborate these reports at the time of this writing.[15]

At least one protest occurred on January 1. Social media users documented severe air pollution in Tehran, which may have depressed protest activity within this province.[16] CTP assesses with low confidence that a protest occurred in the following location: 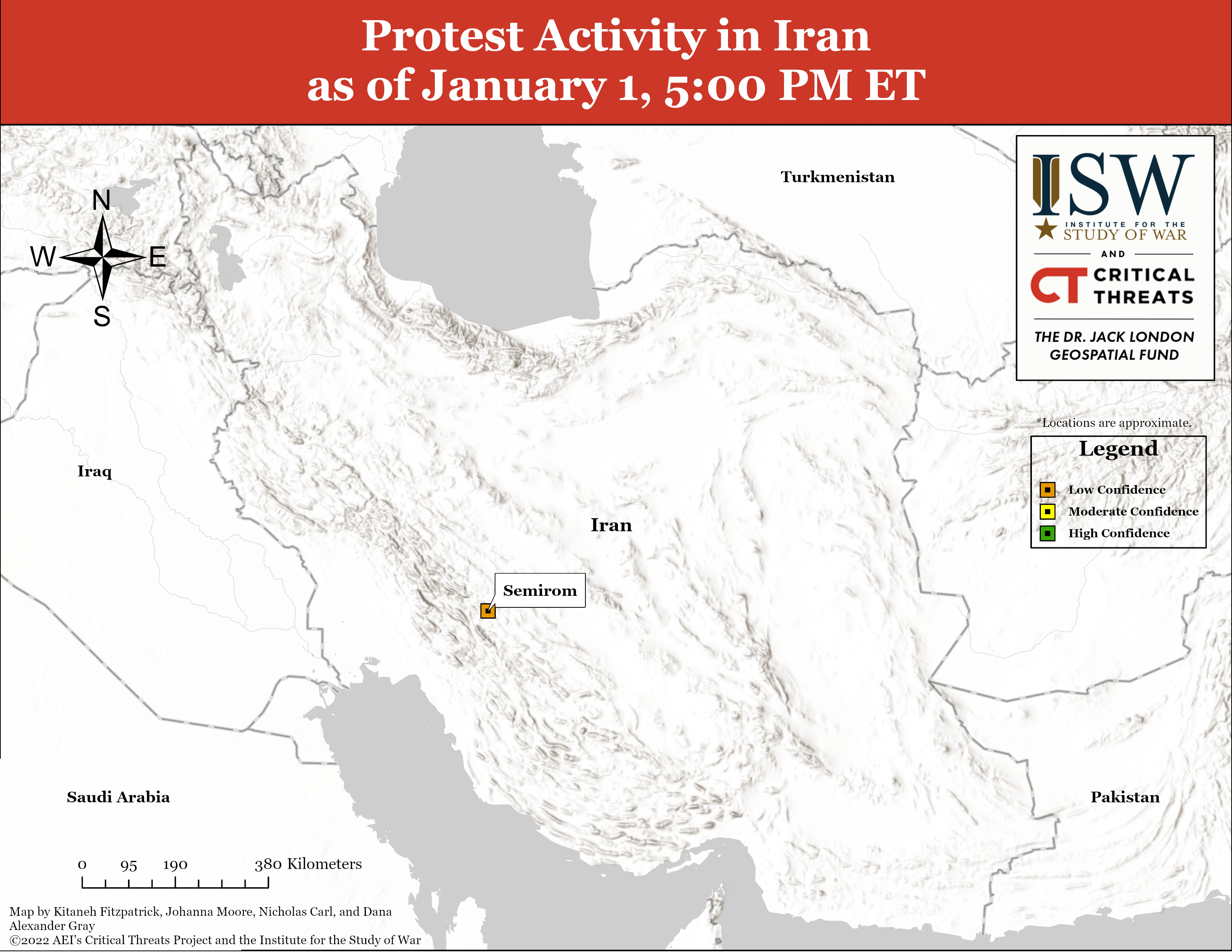 At least three protests occurred in two cities across two provinces on January 2. Social media users documented severe air pollution in Tehran, which may have depressed protest activity within this province.[18] CTP assesses with moderate to high confidence that protests occurred in the following locations:

CTP assesses with low confidence that protests occurred in the following location on January 2: 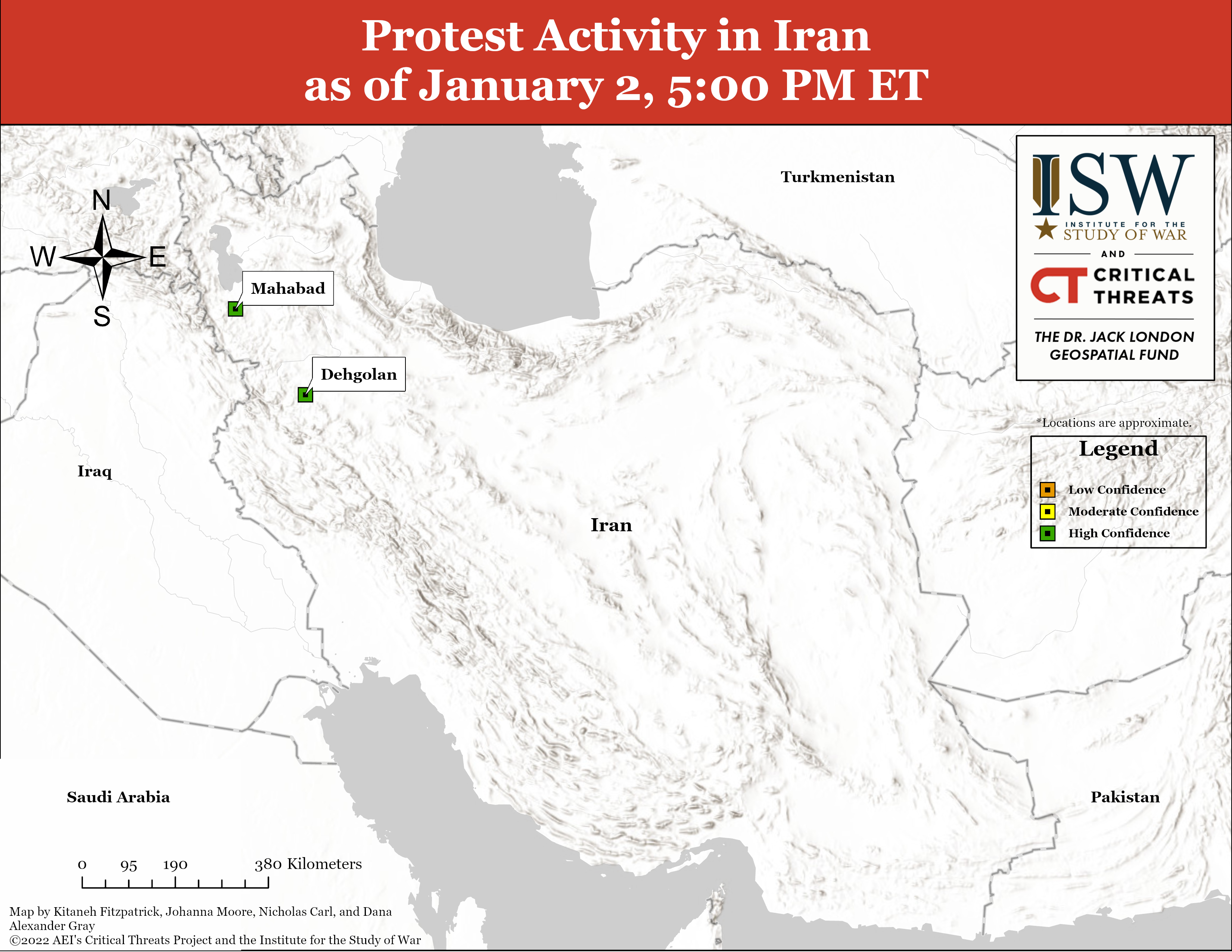 Protest coordinators and organizations circulated calls for demonstrations and strikes on the following dates:

A telecommunications union chief, Mehdi Mohebi, stated on January 1 that around 800 Starlink devices are active in Iran.[24] This number would be an extraordinary increase from previous estimates if confirmed. Elon Musk tweeted on December 26 that almost 100 Starlink devices were active in Iran on December 26.[25] The proliferation of these terminals inside Iran allows citizens to better communicate with one another and document the brutal protest crackdown, despite the expanding regime censorship and internet disruptions.

The Sari Revolutionary Court sentenced 18-year-old protester Mehdi Mohammadi Fard to death, according to a HRANA report on January 2.[26] The court convicted Mohammadi Fard of ”corruption on earth” and ”waging war against God.” Either charge can carry the death penalty. Simultaneously convicting Mohammadi Fard of both charges reduces his likelihood of successfully appealing the sentences. HRANA reported that state security services denied Mohammadi Fard a lawyer and tortured him to extract a forced confession.

Some Iranian banks are prohibiting cash withdrawals, according to social media users. Some ATMs in Tehran reportedly displayed error messages when users attempted to withdraw cash on January 1.[27] Another customer claimed that bank employees in Ghazvin Province told him they did not have money for him to withdraw on January 2.[28] The Hamedan Neighborhood Youth previously claimed on December 31 that local banks were facing a liquidity crisis.[29] CTP cannot corroborate these claims, although such rumors are plausible given that the regime has faced a mounting fiscal crisis in recent weeks and that protest coordinators have encouraged a run on the banks.[30]