Mass protester arrests and detentions are likely impacting protest turnout. An anti-regime Iranian human rights organization estimated in November that over 18,000 Iranians had been arrested for acts of dissidence since the Mahsa Amini protest wave commenced on September 16.[i] The regime has repeatedly promoted the arrest of individuals it claims to be protest organizers as well. The Qom Province IRGC Intelligence Organization announced on December 8 that it had arrested leaders of an anti-regime protest organization that was active on social media, for example.[ii] The arrest of protesters—particularly within key nodes of protest organizations—may have resulted in lower turnout for anti-regime demonstrations planned for December 5-7. Significant strike activity documented on these dates suggests that protest organizers are still capable of coordinating widespread acts of anti-regime defiance, however.[iii]

Some social media users voiced skepticism of groups purporting to represent local protest organizations on social media, reflecting the complex information environment in which dissidents are operating. The Neighborhood Youth of Karaj group issued a statement acknowledging distrust of the organization on December 9. The group claimed that it did not advertise a protest in Karaj, Alborz Province on December 8 because the protest was coordinated by regime actors.[iv] CTP cannot verify the authenticity of this protest group, nor can most protesters. However, the group’s statement and subsequent exchanges with its followers suggest that protest coordinators are being held accountable for their perceived successes and failures as they learn to operate in a heavily censored information space.[v] These exchanges also highlight efforts by Iranians to verify or discredit organizations with online presences. This process is vital for the success of the protest movement considering the real risk that regime agents posing as protest organizations could misdirect protesters.  It also adds an additional vulnerability to the movement, however, because the regime can use agents to cause mistrust of legitimate protest groups. Iranians are likely using a hybrid approach to validating calls for protests that involves both online and direct person-to-person communications.

The Iranian regime may exploit the death of a Sunni cleric to crack down on acts of dissidence in Sistan and Baluchistan Province. Unidentified assailants reportedly kidnapped, shot, and killed Khash city Sunni Friday Prayer Leader Moulavi Abdol Vahed Rigi in the vicinity of Khash, Sistan and Baluchistan Province on December 8. Pro-regime media outlets described Rigi as a “martyr” and circulated footage of Rigi showing support for Khamenei with Friday Prayer Leader Policy Council Chief Mohammad Javad Haj Ali Akbari in November.[vi] The Supreme Leader dispatched a high-ranking delegation headed by Ali Akbari to Sistan and Baluchistan Province on November 13 in a likely effort to escalate against prominent Sunni cleric Moulana Abdol Hamid, who has repeatedly voiced support for anti-regime demonstrations since Mahsa Amini’s death on September 16.[vii]

Some social media users alleged that regime actors killed Rigi, although there is no evidence to corroborate this claim.[viii] A state-run media outlet suggested that armed groups killed Rigi in an attempt to foment religious divisions within the province, citing a clip wherein Rigi alluded to threats he had received from unnamed terrorist groups.[ix] Pro-regime social media actors additionally accused Abdol Hamid’s followers of killing Rigi for supporting Khamenei.[x] The regime may seek to frame Abdol Hamid and his followers for Rigi’s death in an attempt to undermine Abdol Hamid’s popularity throughout Sistan and Baluchistan. Iranian leadership may also use Rigi’s death to justify violently suppressing protests throughout the province.

At least eight protests took place in seven cities across five provinces on December 9. CTP assesses with moderate to high confidence that protests occurred in the following locations: 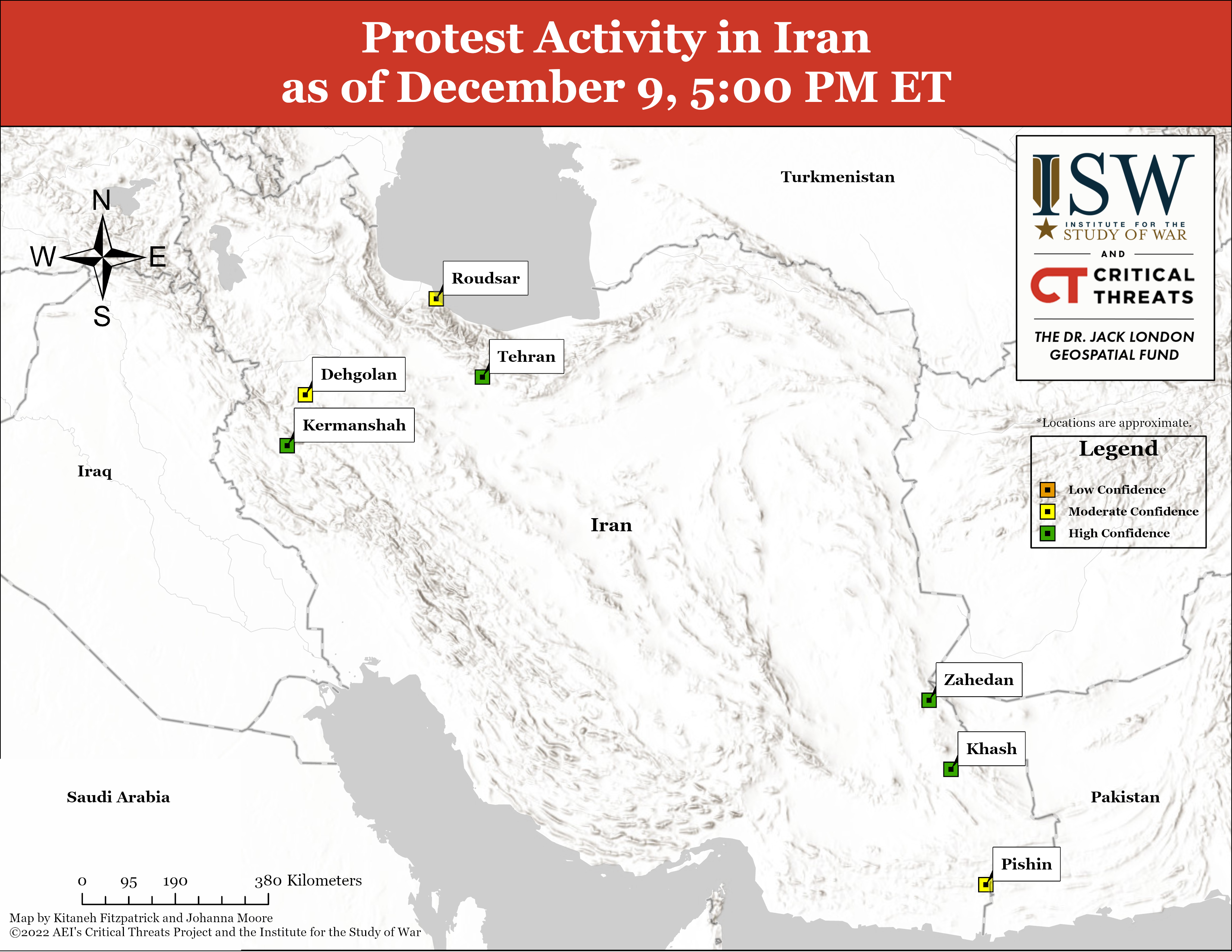 Prominent Sunni cleric Moulana Abdol Hamid condemned the regime for executing Mohsen Shekari on December 8 in his weekly Friday prayer sermon in Zahedan, Sistan and Baluchistan Province. Abdol Hamid added that unknown actors will seek vengeance against security forces for killing innocent protesters, although he did not directly call on protestors to avenge these deaths. Abdol Hamid warned protestors that unspecified agents had infiltrated the protest movement.[xxvi] Abdol Hamid has notably continued to publicly criticize the regime despite reports that Iranian leadership is seeking to diminish his influence.[xxvii]

The Iranian Special Clerical Court sentenced Supreme Leader Ali Khamenei’s niece Farideh Moradkhani to three years in prison on unknown charges.[xxviii] The Special Clerical Court is a court system designed to prosecute clerics and only answers to Khamenei. It is noteworthy that this court sentenced Moradkhani, who is not a cleric. Iranian authorities arrested Moradkhani on November 23 for unclear reasons.[xxix] Moradkhani’s brother Mahmoud Moradkhani published a video of his sister criticizing the regime’s violent crackdown on ongoing, anti-regime protests on November 25.[xxx] Moradkhani’s lawyer tweeted that the court initially sentenced his client to 15 years in prison.[xxxi] Moradkhani’s mother also publicly criticized Khamenei on December 7, as CTP previously reported.[xxxii]

Senior US officials stated that Russia is providing an unprecedented level of military and technical support to Iran in exchange for Iranian-made weapons systems. NBC News reported on December 9 that senior US administration officials stated that Russia may be providing Iran with advanced military equipment and components, including helicopters and air defense systems, in exchange for Iranian-made high precision weapons systems that Russia has and intends to use in the war in Ukraine.[xxxviii] The officials specified that Russia may send Iran Su-35 aircraft within the next year and that Russia is possibly seeking to establish a joint Russian Iranian production line for drone systems in the Russian Federation.[xxxix] US intelligence officials stated on November 19 that Russian and Iranian officials finalized a deal in early November to manufacture Iranian drones on Russian territory.[xl] A Russian milblogger claimed on December 9 that air traffic monitors show that Iranian Air Force cargo planes resumed flights to Moscow on December 8 following a short break of such flights.[xli] ISW assessed that Russian Deputy Defense Minister Colonel General Alexander Fomin met with Iranian Armed Forces General Staff Chief General Mohammad Bagheri in Tehran on December 3 likely to further discuss the sale of Iranian drones and missiles to Russia for use in Ukraine.[xlii] ISW has previously assessed that the Russian military is increasingly reliant on Iranian-made weapons systems due the depletion of its arsenal of high precision weapons systems.[xliii]

The Times of Israel reported that Iran has is smuggling weapons to Lebanon through the Beirut International Airport to bypass blocked routes through Syria. The Times of Israel published an article claiming that the Israeli government was investigating commercial Meraj Airlines planes that are smuggling arms from Tehran and Damascus to Beirut.[xliv] The report claimed that Tel Aviv warned of strikes on the airport.