Note: CTP will not publish a daily Iran Crisis Update on December 25 for the Christmas holiday. CTP will resume daily publishing on December 26.

The Iranian Supreme Court upheld the death sentence of 22-year-old protester Mohammad Ghobadlou on December 24 after rejecting his appeal.[i] The Judiciary convicted Ghobadlou of “corruption on earth” and sentenced him to death in October 2022. This charge—corruption on earth—is an extremely broad charge that the Judiciary often uses to justify executions. The Iranian penal code states that this charge can be brought against an individual who “extensively commits a felony against the bodily entity of the people, offenses against internal or international security of the state, spreads lies, disrupts the economic system of the state, commits arson or destroys properties, distributes poisonous and bacterial and dangerous materials, or [establishes, aids, or abets] places of corruption and prostitution.”[ii] The Supreme Court published earlier on December 24 that it had accepted the appeals of Ghobadlou and Saman Seyyedi Yasin—two protesters on death row—but later retracted that report and stated that it had accepted the appeal of Yasin but upheld Ghobadlou’s death sentence.[iii]

Protest activity increased only marginally for the planned demonstrations on December 24, likely in part due to inclement weather conditions. Calls for protests have largely failed to generate surges in turnout since mid-November 2022. CTP continues to assess that this reduced protest activity does not, however, indicate the end of the anti-regime movement.[iv] The ongoing protests—even at low levels—likely continue to strain the bandwidth, energy, and morale of security forces.[v]

Vice President for Women and Family Affairs Ensieh Khazali commemorated Women’s Week in Iran on December 24.[vi] Khazali celebrated the position of women under the Islamic Republic and accused foreign enemies of trying to promote immorality among Iranian women. She added that the regime will hold events and programs during Women’s Week to “raise awareness among Iranian women” about the role of foreign actors in stoking protests. The UN Economic and Social Council previously voted to expel Iran from the Commission on the Status of Women on December 14 in response to the regime’s oppression of millions of Iranian women.[vii] 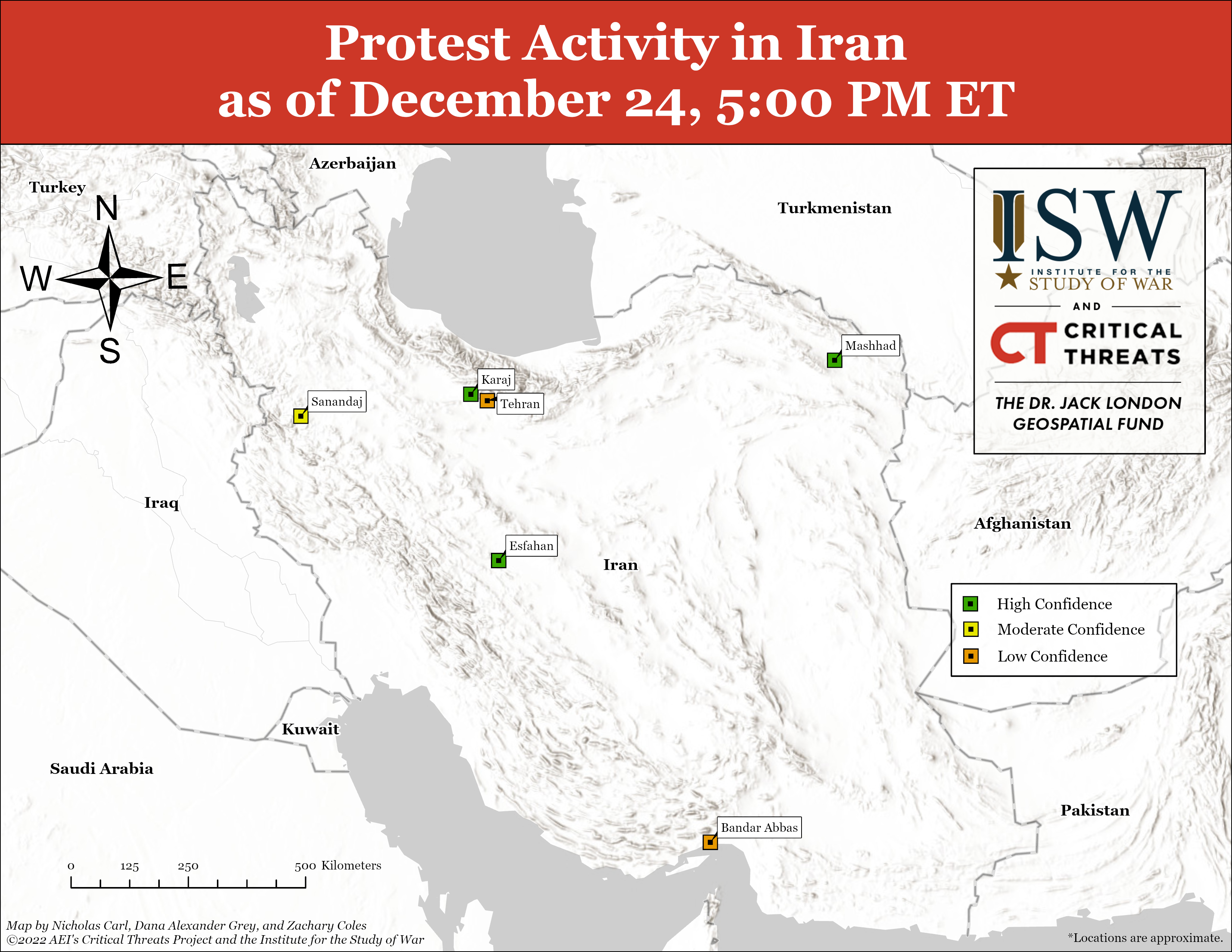 Some Iranian economic and political actors have acknowledged the economic consequences of the regime’s internet disruptions. An Iranian journalist claimed on December 24 that some private internet providers have complained to the Information and Communication Technology (ICT) Ministry regarding the financial losses they have incurred due to the internet restrictions.[xv] These providers warned that continuing internet blackouts jeopardize their businesses. Former ICT Minister Mohammad Javad Azari Jahromi previously stated that on October 30 the regime’s internet disruptions will sharply reduce the revenue of internet providers.[xvi]

Iranian media reported that the Iranian rial reached a new record low of around 400,800 to the US dollar on December 24.[xvii] The dollar sold for around 317,000 rials on September 16—when the protests began.[xviii] Parliamentarian Ehsan Arkani criticized the Central Bank of Iran for the currency devaluation and stated that it must answer to Parliament.[xix]

Fourteen Tehran chapters of the Basij University Students Organization published an open letter on December 24 calling on Judiciary Chief Gholam Hossein Mohseni Ejei to establish an online database for information on prominent cases involving corruption and political and security issues.[xx] The signatories also called for an online platform for clerical and legal experts to submit criticisms and opinions to the Judiciary. The Basij chapters stated that such measures should increase public confidence in the Judiciary.