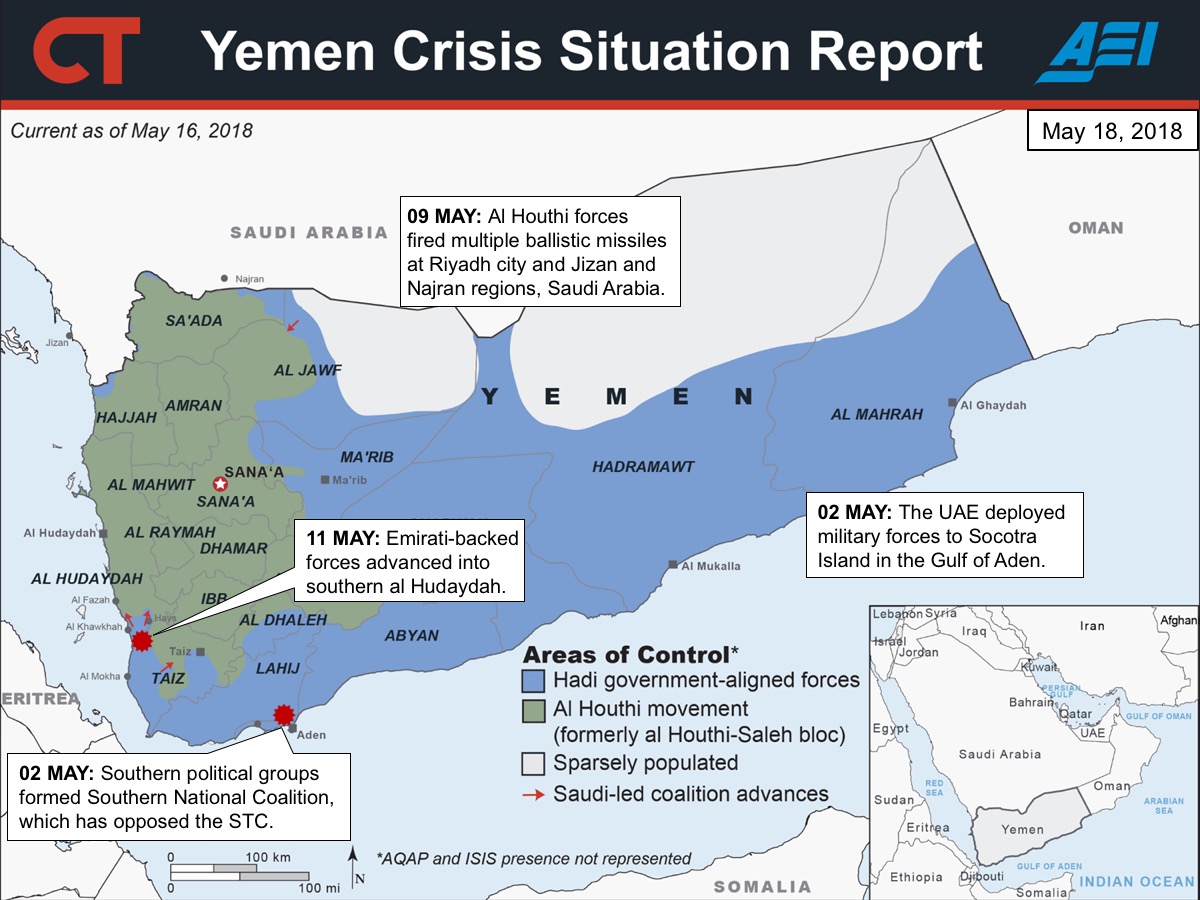 The Saudi-led coalition is setting the stage for an offensive to retake al Hudaydah port. A renewed anti-al Houthi offensive could hobble the UN Special Envoy’s efforts to resume peace talks.

Divisions within the anti-al Houthi coalition surfaced over the issue of the UAE’s military presence on Socotra Island. The UAE deployed over 100 soldiers and several armored vehicles to Socotra Island on May 2. Socotra residents protested the Emirati military presence on May 7. Yemeni Prime Minister Ahmed bin Daghir’s cabinet denounced the Emirati military presence as unjustified on May 5 after the UK’s Independent and other media reported on the UAE’s “annexation” of the island. The Emirati-backed Transitional Political Council of the South (STC), which has also called for bin Daghir’s replacement, responded by supporting the UAE’s development role in Socotra. A new coalition of southern political parties, established to contest the STC’s representation of southerner Yemenis, labeled Emiratis as “occupiers” of southern Yemen and called for the expulsion of UAE troops. The Southern National Coalition, formed on May 2, includes members of the Southern Resistance and the Southern Movement (Hirak). The group’s establishment and opposition to the STC and the UAE may indicate a more organized resistance to Emirati counterterrorism operations and actions throughout southern Yemen.

The new offensive in al Hudaydah may hinder UN Special Envoy Martin Griffiths’ attempts to engage al Houthi leadership in a new round of consultations and planned negotiations. Griffiths began a new round of consultations with Yemeni stakeholders on April 30 and met with officials from the Hadi government, the General People’s Congress (GPC), and Emirati officials. Griffiths’ proposal, which he will present to the UN Security Council in June, includes disarming groups, incorporating al Houthi officials into the Yemeni government, and holding national elections. Griffiths asserted that a postponed visit to meet with al Houthi officials in Sana’a city has not restricted his access to the al Houthi movement. He warned that an escalation in al Houthi ballistic missile attacks and Saudi-led coalition operations may affect negotiations.

A Saudi-led coalition offensive towards al Hudaydah port may undermine UN-led efforts to resume negotiations. Control of al Hudaydah is likely an unstated precondition for the Saudi-led coalition to support renewed peace talks. The al Houthis may justify abstaining from talks because of the coalition’s offensive, which is unlikely to deal a significant enough blow to the al Houthis strength to bring them to the table.