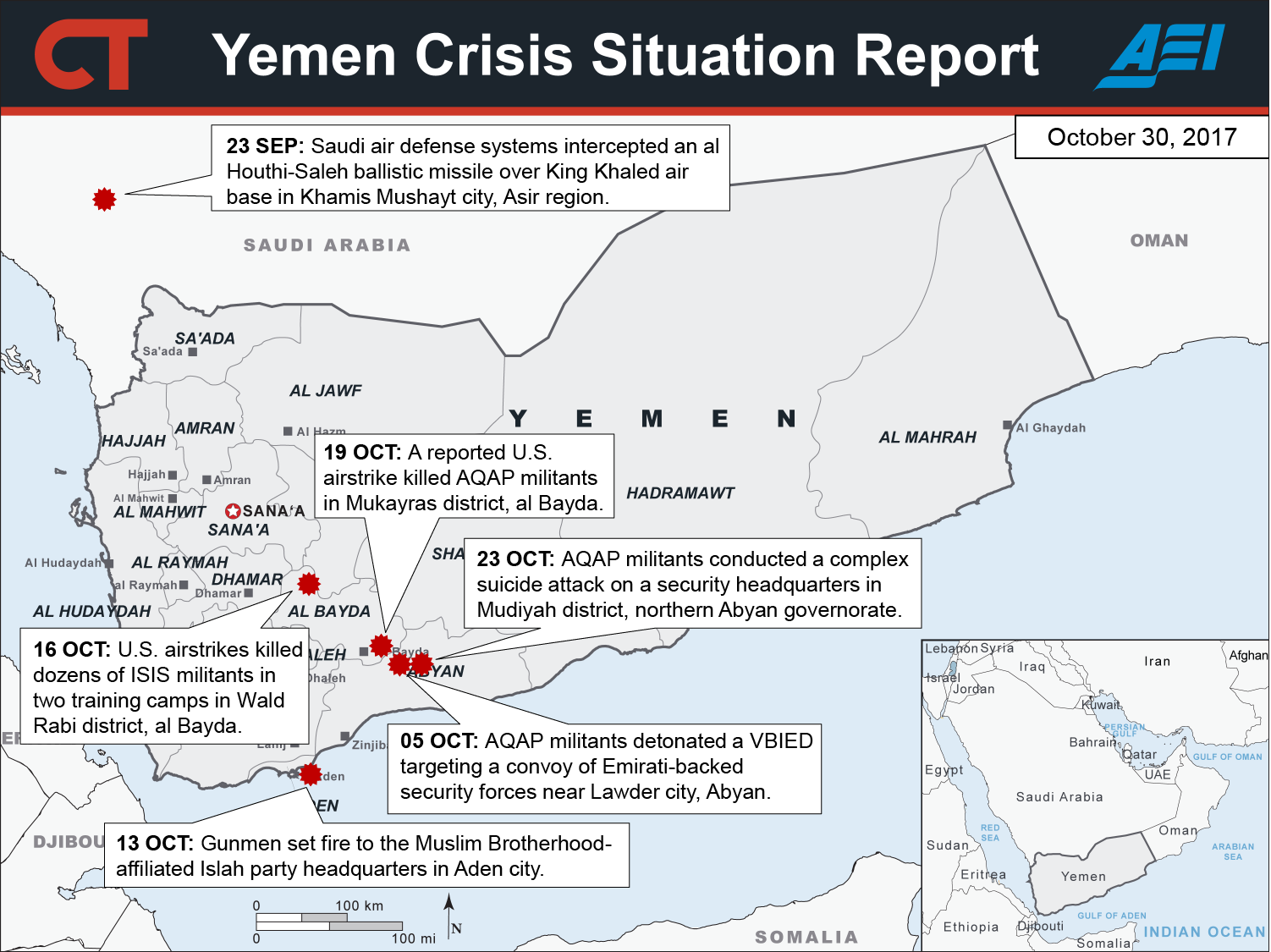 America's new counter-Iran strategy identified Yemen as a primary theater to counter Iran as the Tehran-backed al Houthi movement consolidates power in Sana’a. But conditions are not propitious for that approach.

America's new counter-Iran strategy identified Yemen as a primary theater to counter Iran as the Tehran-backed al Houthi movement consolidates power in Sana’a. But conditions are not propitious for that approach.  Rising southern secessionism is further delegitimizing the U.S.-backed Yemeni government. The UN Special Envoy for Yemen is unable to facilitate a settlement between these groups, and Russia is expanding its influence as a mediator of the conflict.

Southern Yemeni political actors’ pursuit of independence threatens to destabilize the Abdu Rabbu Mansour Hadi government and undermines U.S. policy for a unitary Yemeni state. The Transitional Political Council of the South, established in May 2017, began forming a national assembly and local offices to govern former South Yemen in mid-October and announced its intention to hold an independence referendum. The council, which has received Emirati backing, contests the legitimacy of the Hadi government. The recent announcement provoked brief clashes between Emirati-backed forces linked to the council and forces loyal to the Hadi government in Aden. The council is taking steps to secure its position. Officials met with Oxfam and the International Committee of the Red Cross to coordinate aid and have met with the French ambassador to Yemen. They are also rumored to be meeting with the UN special envoy for Yemen Ismail Ould Cheikh Ahmed.

The role of the Muslim Brotherhood-affiliated Islah party in Yemen is being challenged by Emirati influence. The rise of the al Houthis in 2014 weakened Islah significantly across Yemen, particularly the tribal faction that had backed the party. Emirati influence further limited the role of the political Islamist party in the Hadi government. The Transitional Political Council of the South banned the Islah party in early July. Violence against Islah party entities in Aden then increased following the October announcement of the council’s national assembly. Emirati-backed security forces also temporarily arrested several prominent Islah party members on terrorism charges. President Hadi is likely attempting to appease the Islah party, which plays a significant role in the Hadi government, by empowering it in Ma’rib governorate, northern Yemen. Vice President Ali Mohsen al Ahmar, an Islah member Hadi named as his deputy because of his clout among Yemen’s northern tribes and loyal military units, also traveled to Ma’rib to meet with the local officials.

Russian President Vladimir Putin’s offer to facilitate a political settlement to the Yemeni conflict is an opportunity for Moscow to expand its influence in the region. Russian President Vladimir Putin announced he is prepared to facilitate a settlement of the Yemeni conflict two days before Saudi King Salman bin Abdulaziz’s agreed to purchase the Russian S-400 air defense system and other weapon platforms in early October. Russia also offered to host preliminary talks between former President Saleh and Hadi government representatives later in the month. The UN Special Envoy for Yemen reinvigorated his mediation attempts but is still unable to engage the al Houthi-Saleh bloc because he is perceived to be biased against the bloc. Russia, in contrast, has maintained its neutrality in the Yemeni conflict by maintaining relations and providing some assistance to the al Houthi-Saleh bloc and Hadi government.

The U.S. expanded its targeting to include the Islamic State of Iraq and al Sham (ISIS) for the first time in Yemen. U.S. airstrikes killed 60 ISIS militants in a ten day period in northwest al Bayda governorate, central Yemen. These airstrikes do not necessarily indicate that ISIS is establishing a stronger foothold in the country. ISIS has not conducted an attack in three months beyond a failed attempted suicide bombing in central Yemen. ISIS’s small presence in Yemen is likely sustained by al Qaeda in the Arabian Peninsula (AQAP) in central Yemen, which the U.S. continued to target.

AQAP is sustaining its attack campaign in southern and eastern Yemen despite a renewed Emirati-backed counterterrorism campaign that began in August. AQAP continued an improvised explosive device (IED) campaign to regain its permissive environment in northern Abyan governorate, southern Yemen. Heightened discontent among Abyani tribes toward Emirati-backed security forces increases the likelihood that the gains made by security forces will be temporary. AQAP is also likely responsible for a string of assassinations targeting moderate Salafi imams in Aden city, a strategy al Qaeda has employed in the past. Though the group may be losing its influence in Taiz, Yemen’s third largest city.

The rise of southern secessionism will likely obstruct a political settlement of the Yemeni conflict since current efforts are focused on promoting a unified Yemen. It may also detract from counterterrorism efforts in southern Yemen if secession efforts begin to turn violent. The continued failure of the UN-led process will allow AQAP time to recover from recent setbacks and reestablish safe havens it lost in August in southern and eastern Yemen.