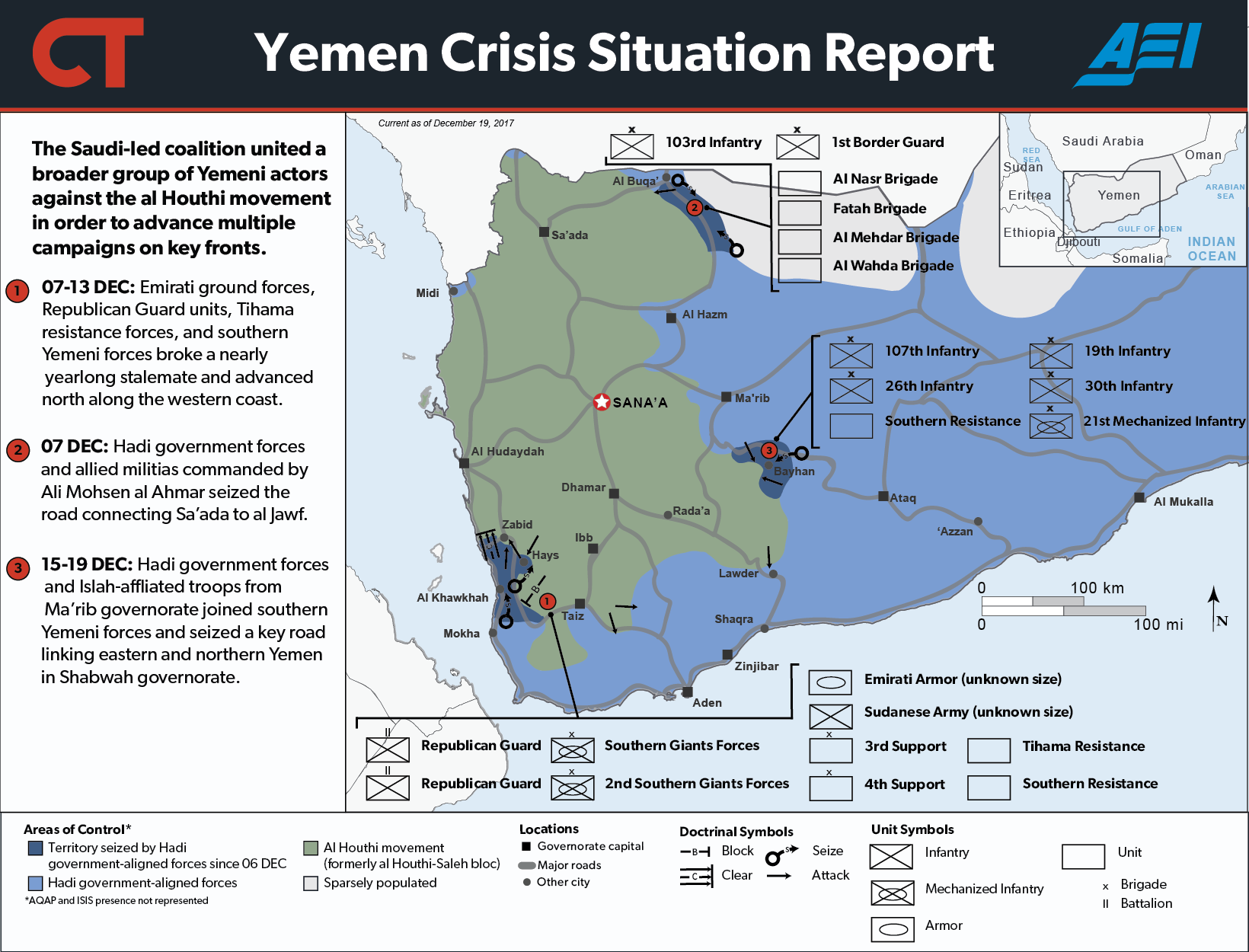 Al Houthi movement forces fired a ballistic missile at Riyadh, Saudi Arabia, on December 19 to test Saudi and American responses. The United States has led an effort at the UN to provide evidence that Iran violated two UN Security Council resolutions (UNSCR 2231 and 2216) by transferring ballistic missile capabilities and other weapons to Yemen’s al Houthi movement.  U.S. Ambassador to the UN Nikki Haley presented evidence of Iranian violations at a December 14 press conference and argued for the UN to hold Iran accountable for these transfers on December 19. American and international pressure, including a statement from U.S. President Donald Trump calling on the Saudi-led coalition to lift the blockade it had established in response to the November 4 ballistic missile fired at Riyadh from Yemen, prompted the coalition to lift the blockade. Saudi Arabia responded to the most recent attack by saying ports would be left open.

The incorporation of forces affiliated with the Islah (Reform) party and the resumption of efforts led by Yemeni Vice President Field Marshal Ali Mohsen al Ahmar have pressured al Houthi positions on the eastern front line. The UAE shifted its position on the Islah party, which includes members of the Muslim Brotherhood, on December 13, to pull Islah into the anti-al Houthi alliance. Islahis had been meeting with al Houthi officials during the fall likely because of the anti-Islah position the Emiratis held.  Islah-affiliated troops, along with the 19th infantry, 21st mechanized, and 26th infantry brigades and southern militias, helped coalition-backed forces seize a strategic road linking eastern and northern Yemen in Bayhan district in Shabwah governorate. Ali Mohsen’s forces seized the primary road connecting Sa’ada and al Jawf governorates, northern Yemen in early December and are continuing an offensive to establish a foothold in northern Sa’ada. Ali Mohsen pledged to advance his forces toward Sana’a after Saleh defected from the al Houthi movement but has yet to make any significant gains.

Emirati-backed Yemeni forces, supported by Yemeni military units previously commanded by Ahmed Saleh, are advancing north along the Red Sea coastline toward al Hudaydah port. Former Republican Guard units joined Emirati and Abdu Rabbu Mansour Hadi government-aligned forces to help break a nearly yearlong stalemate on Yemen’s western coast. The new offensive aims to seize al Hudaydah port, a critical supply hub for the al Houthis, in order to isolate the al Houthi positions in Yemen. Ahmed Saleh, whom Hadi had appointed ambassador to the UAE, has been in talks with the Emiratis since the crisis began. The Emiratis may see Ahmed Saleh as his father’s successor and could be positioning him to assume the leadership of his father’s party, the General People’s Congress (GPC). The UAE has been involved in internal GPC talks after Ali Abdullah Saleh’s death.

The UAE may be expanding its influence in Yemen in the wake of Saleh’s death. The Emirati-backed Transitional Political Council of the South (STC) announced it will hold its first 303-member national assembly in Aden on December 23. The STC will attempt to pass a bill forming an independent southern state, which would further codify the UAE’s sphere of influence in southern Yemen. STC President Aydarus al Zubaidi visited troops in the recently seized Khawkah district, near the frontline in al Hudaydah governorate. Zubaidi’s visit could be an indicator that the UAE seeks to legitimize the STC outside of Yemen’s historical south. Expanding southern influence beyond its expected region could accelerate a competition between the UAE and Saudi Arabia for influence within Yemen.

The broadening of members of the anti-al Houthi coalition in Yemen may hasten the weakening of the al Houthi movement, but it is unlikely to resolve the overall political crisis. Yemeni factions seek to secure their long-term influence over national-level politics and power. The question of how resources and power within Yemen will be divided remains unanswered, meaning any solution to the crisis will be short-lived.