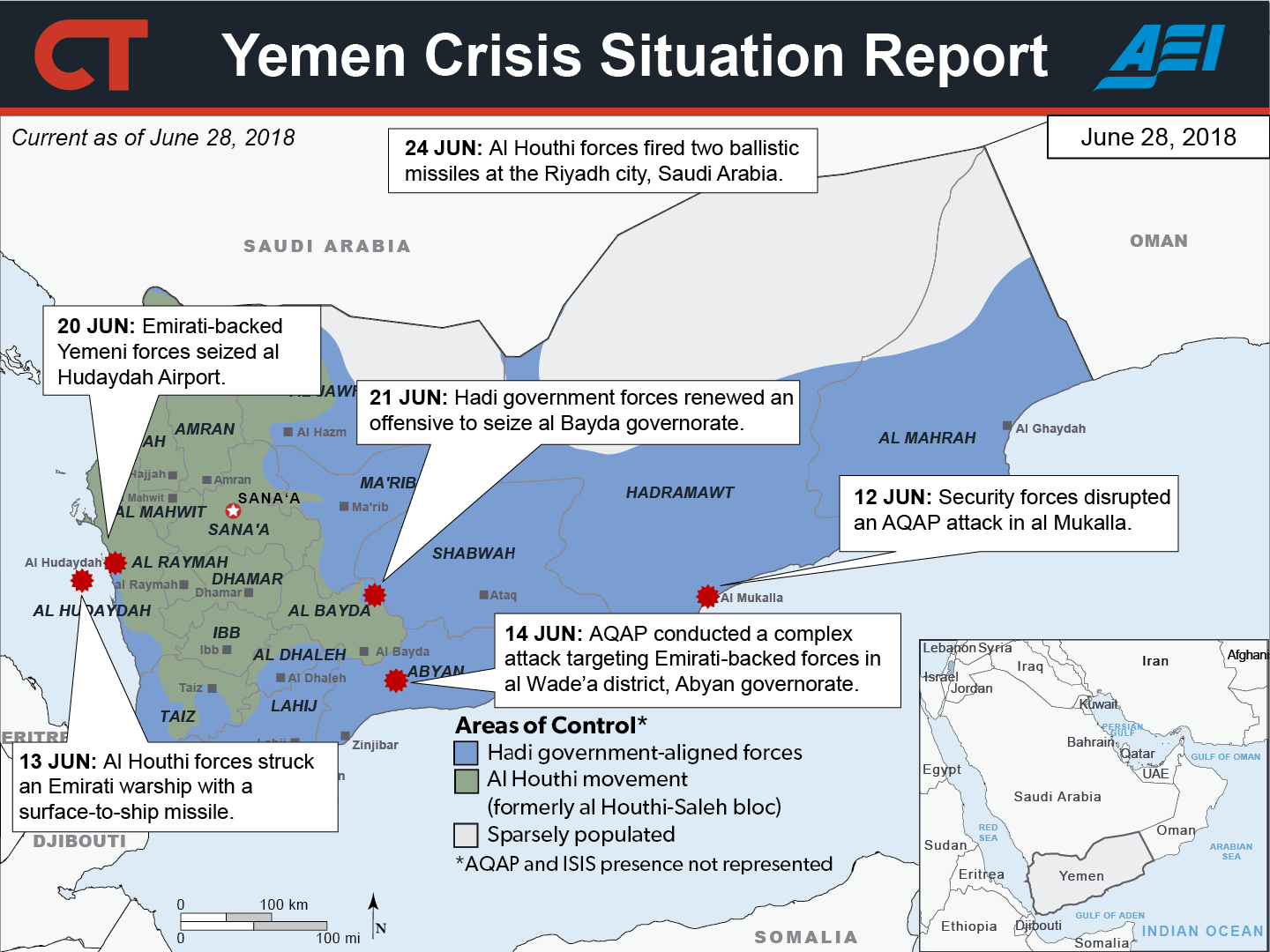 An imminent Emirati military offensive in Yemen will jeopardize American security interests in the Arabian Peninsula under current conditions.

An Emirati-led offensive on al Hudaydah port city is almost certain. UN Special Envoy to Yemen Martin Griffiths has not secured an agreement for an al Houthi withdrawal from the port city. The UAE set a deadline for al Houthi forces to withdraw under a negotiated settlement by June 30, after which they will likely begin an assault on the port city. Emirati-backed Yemeni forces *plan to advance north along the coastal road toward the port while simultaneously moving northeast around the city to seize the main road connecting al Hudaydah to Sana’a.  Coalition officials repeatedly stated they only intend to seize the port and not the entire city. Seizing the port will still require Emirati-backed forces to advance through dense urban areas if they assault the port by land. It is unclear how the UAE plans to maintain control over the port and continue its functions while al Houthi forces control the city. Al Houthi forces are *disrupting the main supply line for the offensive by counterattacking in al Fazah and al Jah areas, located along the coastal road in southern al Hudaydah governorate.

The al Houthi movement may asymmetrically retaliate against the UAE for the al Hudaydah offensive. Al Houthi forces may *launch ballistic missiles at the UAE or Emirati bases in the Horn of Africa if the UAE assaults the port city. Al Houthi forces may also attack commercial ships in the Red Sea with surface-to-ship missiles or remote-controlled explosive boats. Al Houthi Spokesman Brigadier General Sharaf Ghaleb Loqman *claimed on June 1 that Abu Dhabi is now in range of al Houthi ballistic missiles. Al Houthi forces launched a ballistic missile at Riyadh on June 24 in retaliation for the Red Sea coast offensive, which may have meant to signal to the UAE the possibility of a missile reaching Abu Dhabi. The al Houthi Burkan 2 (Qiam) missile has a demonstrated range of roughly 1000 kilometers, 350 kilometers short of reaching Abu Dhabi. Al Houthi forces could develop the capability to reach the UAE, however.

The UN envoy is attempting to negotiate a settlement for al Hudaydah to prevent a possible humanitarian disaster and preserve planned talks for later in the summer.  UN Special Envoy to Yemen Martin Griffiths secured an al Houthi commitment to transfer al Hudaydah port to UN administration but has been unable to reach an agreement that meets the coalition’s demands for an unconditional withdrawal from the Red Sea coast. Griffiths repeatedly warned that an assault on al Hudaydah port city will undermine peace talks. Griffiths is prioritizing preventing a military confrontation in the city over organizing negotiations to resolve the civil war, further delaying UN peace talks. An offensive on the port will exacerbate the humanitarian crisis if the fighting prevents aid and imports from entering the country. The UAE claims seizing the port will ultimately improve the humanitarian crisis because the coalition and Hadi government will manage imports through the port more efficiently. The UAE is prepositioning humanitarian aid around al Hudaydah to mitigate its humanitarian impact. It is unlikely this aid is sufficient to support the two thirds of Yemen’s population that will lose their main source of basic goods if the port is shutdown for an extended period.

Yemeni actors are positioning themselves for the next phase in the Yemeni conflict. President Abdu Rabbu Mansour Hadi returned to Yemen for the first time in over a year and a half on June 14 after meeting with Emirati Crown Prince Mohammed bin Zayed in the UAE on June 12. Hadi held a *series of *meetings with senior and local government officials in a likely attempt to reinforce his position in the country. A Transitional Political Council for the South (STC) official warned that “a new, and possibly more destructive” conflict for southern independence may begin after the fight against the al Houthi movement ends.

Al Qaeda in the Arabian Peninsula (AQAP) may be leveraging attention on al Hudaydah to prepare for a future offensive.  The UAE last conducted a significant counterterrorism operation in Yemen in March, one month before beginning a push up the Red Sea coast in April. Emirati focus on the Red Sea coast offensive has likely decreased pressure on Salafi-jihadi groups in Yemen. AQAP increased its rate of operations against Emirati-backed forces and is likely *responsible for a *series of *assassinations of security officials in southern and eastern Yemen in June. Senior AQAP official Khaled Batarfi acknowledged the group suffered losses over the past year but vowed AQAP will soon demonstrate its “powerful wrath” in a June 19 interview. (AQAP claims and statements obtained through Telegram and SITE.)

A protracted offensive on al Hudaydah port city may push the humanitarian crisis to dire levels and further destabilize Yemen. A possible al Houthi attack on the UAE’s homeland will elicit a hardline response from Emirati officials and further decrease the likelihood of a political resolution to the conflict. AQAP will be able to leverage conditions set by an escalation in the conflict to resurge.