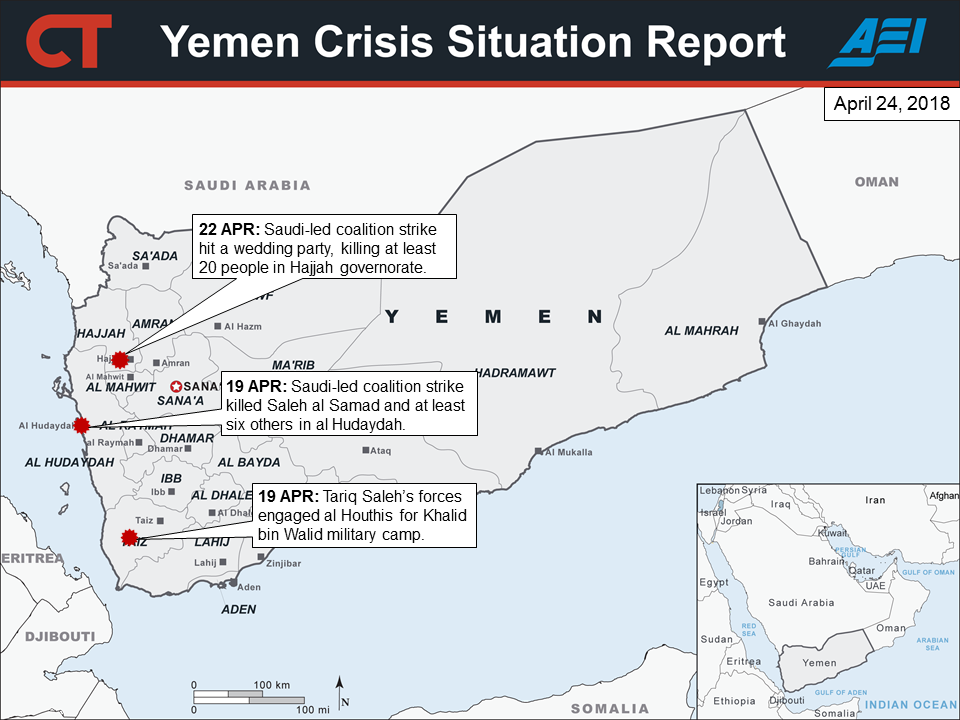 The consolidation of al Houthi hardliners within Sana’a lessens the likelihood that a political settlement can be reached in the near future. The al Houthi movement, though weakened, has pledged reprisal attacks for recent Saudi-led coalition airstrike.

Hardliners within the al Houthi movement are consolidating power after the death of Saleh al Samad, who was the president of the al Houthi Supreme Political Council. The al Houthi National Defense Council appointed Mahdi Mohammed Hussein al Mashat as Samad’s successor. A Saudi-led coalition airstrike targeted Saleh al Samad on April 19 in al Hudaydah city, where he was rallying support for the al Houthi movement. Leader Abdul Malik al Houthi added that six others were killed in the airstrike. Fares Mana’a, a U.S.-sanctioned arms trafficker and al Houthi-appointed minister, might also have been killed in the strike along with al Houthi Deputy Chief of Staff Maj. Gen. Ali Hamoud al Mushaki. Samad had been increasingly sidelined over the past year and recently made a move against the head of the Supreme Revolutionary Committee Mohammed Ali al Houthi. Mashat, Samad’s replacement, is reported to be close to Mohammed al Houthi and other key al Houthi leaders.

UAE-backed Yemeni forces are consolidating positions held along the Red Sea coast. Brigadier General Tariq Saleh, the nephew of late Ali Abdullah Saleh, is commanding the Yemeni National Resistance Forces in a large-scale military operation in western Mokha to gain control of Khalid bin al Walid military camp and secure a key road juncture between Mokha port city and Taiz. The Yemeni National Resistance Forces include former members of Yemen’s elite fighters under the Republican Guard and the Central Security Forces. Reports emerged on April 12 that three brigades of fighters, estimated at about 3,000 men, with heavy machinery and armored vehicles were gathering in Mokha city. The surge in force strength along the Red Sea may enable the UAE-backed forces to secure the internal road that leads north to Hays in order to stage for a future advance north toward Hudaydah port city.

Saudi-led coalition airstrikes continue to draw criticism from the international community. A Saudi-led coalition airstrike killed over 20 people at a wedding party in Yemen’s northern Hajjah governorate late on April 22 and 12 people in the coastal al Hudaydah governorate on April 7. The al Houthi movement has selectively picked up components of the international community’s critique of the air campaign to advance al Houthi propaganda. The U.S. provides non-combat support to the coalition and seeks to help the coalition avoid civilian casualties. The civilian death toll from the air campaign is not known and difficult to assess as all parties to the conflict have incentives to report casualties differently. The war’s toll on civilians extends beyond direct casualties, however, as Yemen’s dire humanitarian conditions stress a weakened population.

UN Special Envoy to Yemen Martin Griffiths seeks to set conditions for political negotiations. He described his initial meetings with al Houthi leadership in Sana’a as encouraging and then conducted meetings with members of the internationally recognized government of Abdu Rabbu Mansour Hadi as well as additional meetings with an al Houthi delegation. Griffiths also met with members of the Transitional Political Council of the South (STC) in Abu Dhabi in early April. Griffiths met with U.S. Acting Secretary John Sullivan in Washington, DC, to discuss his current efforts on April 19. Griffiths intends to present a plan for negotiations by mid-June, but has warned military developments could scuttle such efforts.

A possible renewed advance by UAE-backed Yemeni forces along the Red Sea coast toward al Hudaydah coupled with sustained airstrikes against al Houthi leadership will pressure the al Houthi movement, but may cause the leadership to harden its position.

Tomas Padgett Perez and Maher Farrukh, as well as Miranda Morton and Teresa Fellner, contributed research to this report.