Key Takeaway: Islamic State affiliates have released pledges of allegiance to the new IS leader following the prior leader’s death in October. The pledges did not indicate a significant change in the loyalties of IS affiliates or their capabilities or territorial reach. Two unofficial pro-IS groups also released pledges to the new leader. Some affiliates may increase attacks in revenge for the killing of the IS leader, mirroring prior surges of activity after leadership changed.

The Islamic State announced the death of its leader and named a successor on November 30. IS announced on November 30 that its new overall leader is Abu Husayn al Qurayshi. Local Syrian armed groups killed late IS leader Abu Hassan al Qurayshi in mid-October in southwestern Syria. Abu Hassan al Qurayshi had been the leader of IS since March 2022. IS claimed that Abu Husayn al Qurayshi is a veteran jihadist but did not provide any additional information on him. This secrecy is typical of recent IS leadership appointment announcements. IS likely announced the leader in response to an anti-IS media channel claiming on November 29 that the IS leader had died. Pro-IS online accounts also participated in a spontaneous repledging campaign in late November, possibly due to rumors of an IS leadership change.

IS affiliates participated in a pledge campaign to show support for the new IS leader. IS affiliates in Afghanistan, Burkina Faso, the Democratic Republic of the Congo, the Egyptian Sinai, India, Iraq, Lebanon, Libya, Mali, Mozambique, Niger, Nigeria, Pakistan, Somalia, Syria, Tunisia, and Yemen have pledged allegiance to the new IS leader as of December 23. These pledges reaffirm the affiliates’ loyalty to IS following the death of the prior leader, to whom each affiliate had also sworn a personal oath. The pledges are also an opportunity for IS to assert to current and potential fighters that it is a unified and expanding global movement.

Pledges from the Islamic State’s Nigerian affiliate confirm the group’s growing networks in central Nigeria. Six Islamic State West Africa Province (ISWAP) branches have pledged allegiance to the new IS leader since December 1. ISWAP released a pledge on December 5 from a new ISWAP subgroup in central Nigeria. The pledge shows three photosets with 11 fighters. This network is likely small and lacks access to weapons; one fighter is holding a pistol, but no other weapons are displayed. The central Nigeria branch was also the only ISWAP subgroup to photograph their pledges indoors, perhaps suggesting this group is not secure enough to gather outdoors. The addition of a new group since the previous pledge campaign in March highlights ISWAP’s growing presence in central Nigeria. ISWAP claimed its first attacks in central Nigeria in April 2022 and has carried out numerous attacks in the region since.[1] ISWAP was also likely responsible for an attack plot in Abuja, Nigeria’s capital, in late October. ISWAP’s pledge from central Nigeria illustrates ISWAP’s desire to highlight its expansion into new areas of that country. 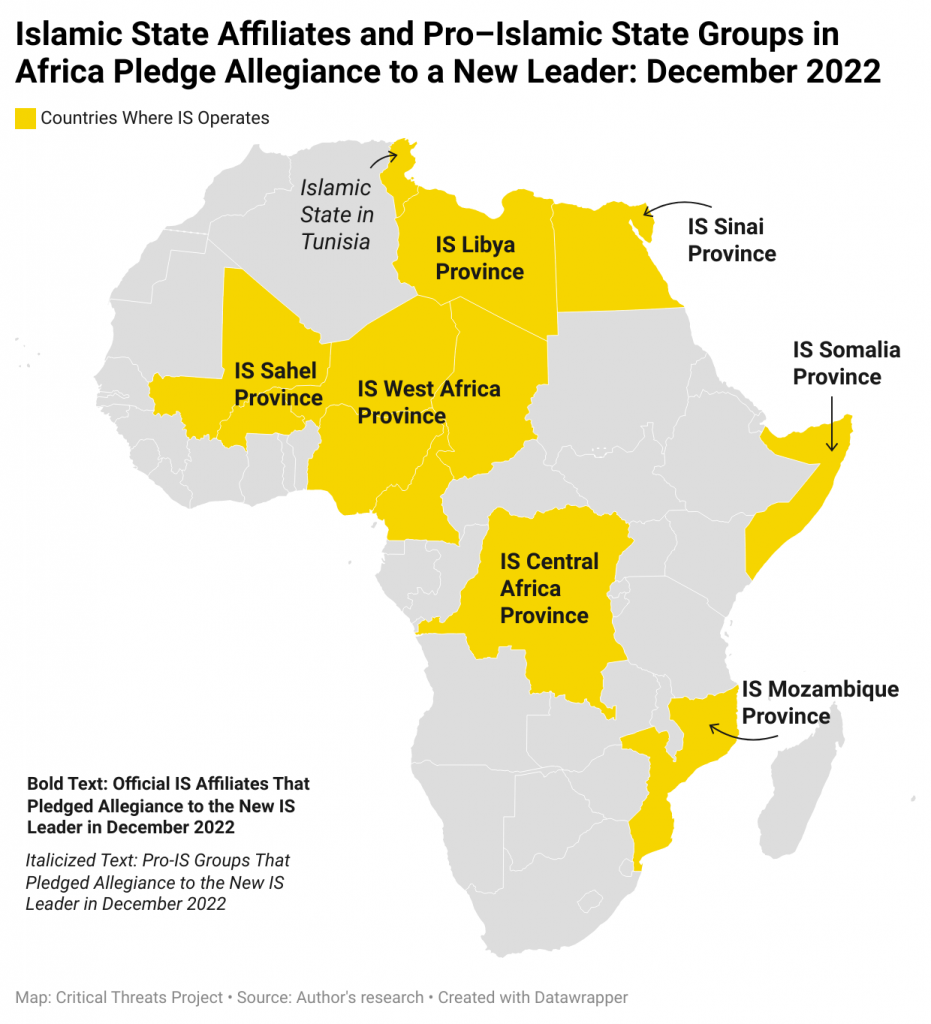 ISGS’s first pledges confirm it maintains its independent status from ISWAP. ISGS militants in the tri-border region between Burkina Faso, Mali, and Niger pledged on December 3, and fighters based in Menaka, northeastern Mali, pledged on December 4. The photosets do not indicate a significant change in ISGS fighter numbers or weapons capacities since March 2022. ISGS likely seeks to formalize its presence in Menaka, but its pledge in this region does not mark an ISGS expansion to new areas. Neither ISGS nor ISWAP pledged from Menaka in March 2022, but ISGS has claimed offensives and regular attacks in this area in 2022 and has been intermittently active around Menaka since the group’s formation.

Pro-IS militants in Tunisia and Lebanon pledged to demonstrate their ongoing relevance and connection to the broader IS network. IS has never recognized branches in Tunisia or Lebanon as official IS affiliates, likely because of the groups’ inability to conduct frequent or high-profile attacks. Pro-IS fighters in Tunisia released a pledge to the new IS leader on December 7. Tunisian fighters last released a pledge to IS in 2019. The photoset shows four fighters in a room without weapons. Pledges from pro-IS fighters in 2019 boasted comparatively more weapons and manpower in an open-air location than in the December pledge. It is not clear whether the individuals in the 2022 pledge belong to the same group as the 2019 pledge. Tunisian counter-IS operations have significantly weakened the group in recent years.

Pro-IS fighters in Lebanon also pledged to the new IS leader on December 8. The fighters released three photosets showing a total of 17 militants. Pro-IS fighters based in Lebanon have never participated in a pledge campaign, but IS has claimed rare attacks in Lebanon in the past, the most recent of which was a shooting against security forces in May 2019.[4] It remains unclear whether the fighters pledging now have participated in previous attacks in Lebanon, however. IS is unlikely to elevate groups in Tunisia or Lebanon to official affiliate status due to those groups’ continued lack of fighters and resources and inability to attack. The photosets from Tunisia and Lebanon show that IS maintains a physical, though small and disparate, presence in these countries and highlights these fighters’ desire to remain connected to the larger IS movement. 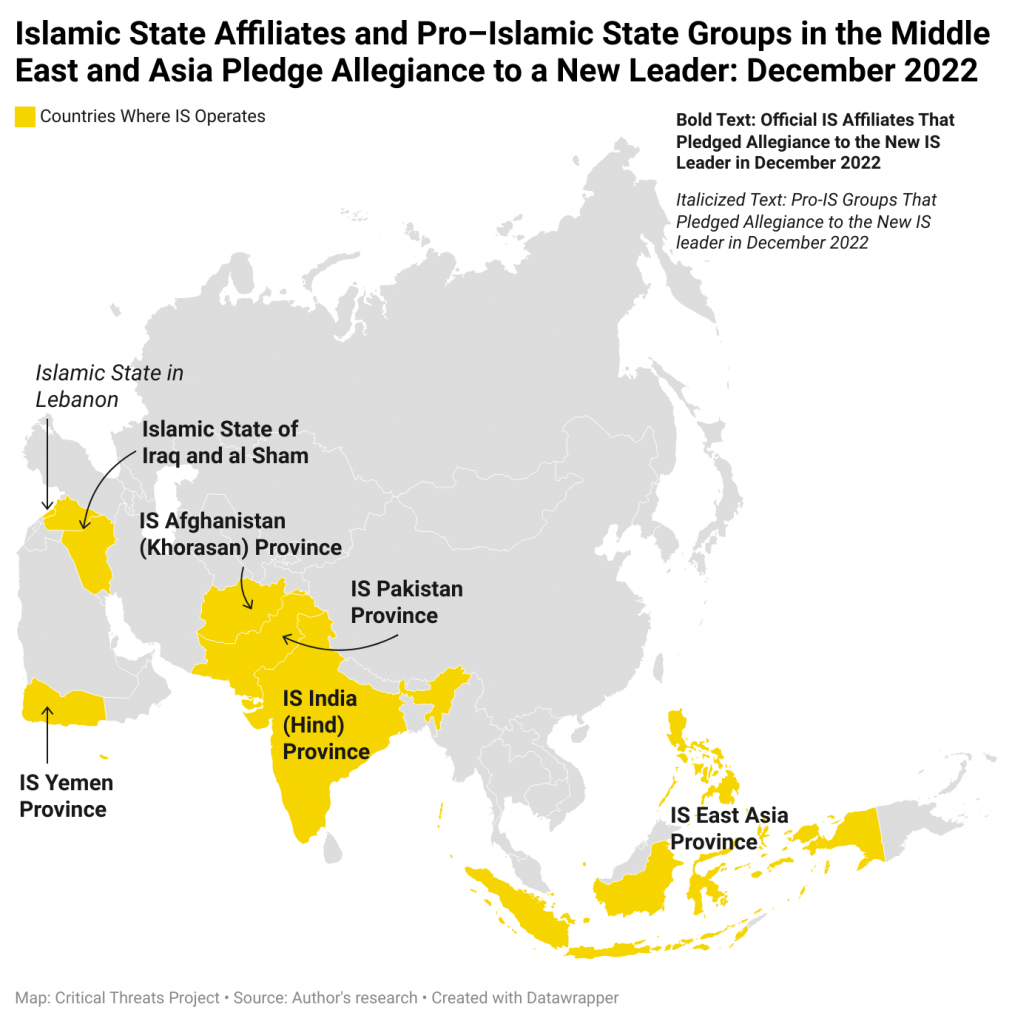 [4] SITE Intelligence Group, “IS Identifies Executor of Eid al-Fitr Eve Attack in Tripoli as One of its ‘Soldiers’ in Naba 189,” July 4, 2019, available by subscription at www.siteintelgroup.com.