This analysis is co-published by the Institute for the Study of War.

Al Qaeda has expanded its presence in Afghanistan since 2014 in collaboration with the Taliban. The Taliban and al Qaeda maintain, and will sustain, an enduring and intimate relationship that invalidates the premise of U.S. negotiations with the Taliban. The Taliban-al Qaeda partnership will allow al Qaeda militants to exploit any potential U.S. military withdrawal to expand further their access to safe havens in Afghanistan.

U.S. Secretary of Defense Mark Esper reaffirmed the Trump Administration’s intent to reach a political agreement and continue the withdrawal of American forces from Afghanistan during a visit to the country on October 21.[1] U.S. President Donald Trump halted negotiations with the Taliban in September in the wake of a bombing in the country’s capital that killed a U.S. soldier.[2] It is unclear whether the U.S. and the Taliban will resume talks in the near term. Meanwhile, al Qaeda continues to expand its presence in Afghanistan in a close relationship with the Taliban that undermines a central premise of talks: that the Taliban will break with al Qaeda as part of a peace deal. Al Qaeda has already exploited previous U.S. drawdowns and is prepared to surge in collaboration with the Taliban if the U.S. withdraws from Afghanistan.

Al Qaeda has prioritized its re-entry into Afghanistan since 2014, when the NATO-led International Security Assistance Force (ISAF) drew down forces.[3] Al Qaeda Emir Ayman al Zawahiri announced the formation of al Qaeda in the Indian Subcontinent (AQIS) in 2014, a move intended to counter the Islamic State’s declaration of a so-called caliphate in Iraq and Syria as well as exploit the ISAF drawdown.[4] Al Qaeda’s re-entry into Helmand Province in southern Afghanistan forced the U.S. to resume counter-terrorism operations there in 2015.

Senior AQIS leaders and Taliban commanders are co-located in Afghanistan today, signaling an enduring and high-level partnership. American and Afghan forces targeted a joint Taliban-al Qaeda compound in Musah Qal’ah District, a Taliban stronghold considered the group’s de facto capital, in Helmand Province on September 22.[5] Multiple Afghan security organizations reported that the operation killed senior AQIS leader Asim Umar and a courier who connected AQIS leaders to Zawahiri. Afghanistan’s intelligence agency and a U.S. official have since confirmed Umar’s death in the raid.[6] The operation also targeted several Taliban commanders from districts in Helmand Province.[7] It is a sign of the extent of al Qaeda’s return to the area.

The joint compound in Musah Qal’ah is only one example of the depth and breadth of the Taliban-al Qaeda relationship. Al Qaeda members are embedded with the Taliban at positions throughout Afghanistan. The U.S. military assessed in February 2019 that approximately 200 al Qaeda militants are active in Kabul, Badakhshan, Kunar, Paktia, Helmand, and Nimroz Provinces.[8] The UN Security Council (UNSC) assessed that al Qaeda “considers Afghanistan a continuing safe haven for its leadership” and that al Qaeda continues to rely “on its long-standing and strong relationship with the Taliban leadership” in July 2019.[9] The UNSC also assessed that al Qaeda is actively attempting to grow its presence in Shighnan District in Badakhshan Province and Bermal District in Paktika Province.[10] A senior Taliban official said in December 2018 that several thousand foreign fighters operate in Taliban territory.[11] Many of these fighters are likely affiliated with al Qaeda. Durable alliances between al Qaeda militants and Taliban members indicate an entrenched al Qaeda network embedded within the Taliban.[12] Al Qaeda members also provide military and religious instruction to the Taliban.[13]

The U.S. cannot expect the Taliban to fulfill its counter-terrorism requirements against al Qaeda. The Taliban has already demonstrated that it will not act to thwart al Qaeda. The Taliban neither severed ties with al Qaeda nor took action to prevent terrorists from operating in Afghanistan, as it promised in a now-defunct draft agreement with the U.S. in early September.[14] Al Qaeda will continue to exploit its relationship with the Taliban to expand its presence in Afghanistan and will accelerate this expansion if the U.S. withdraws. 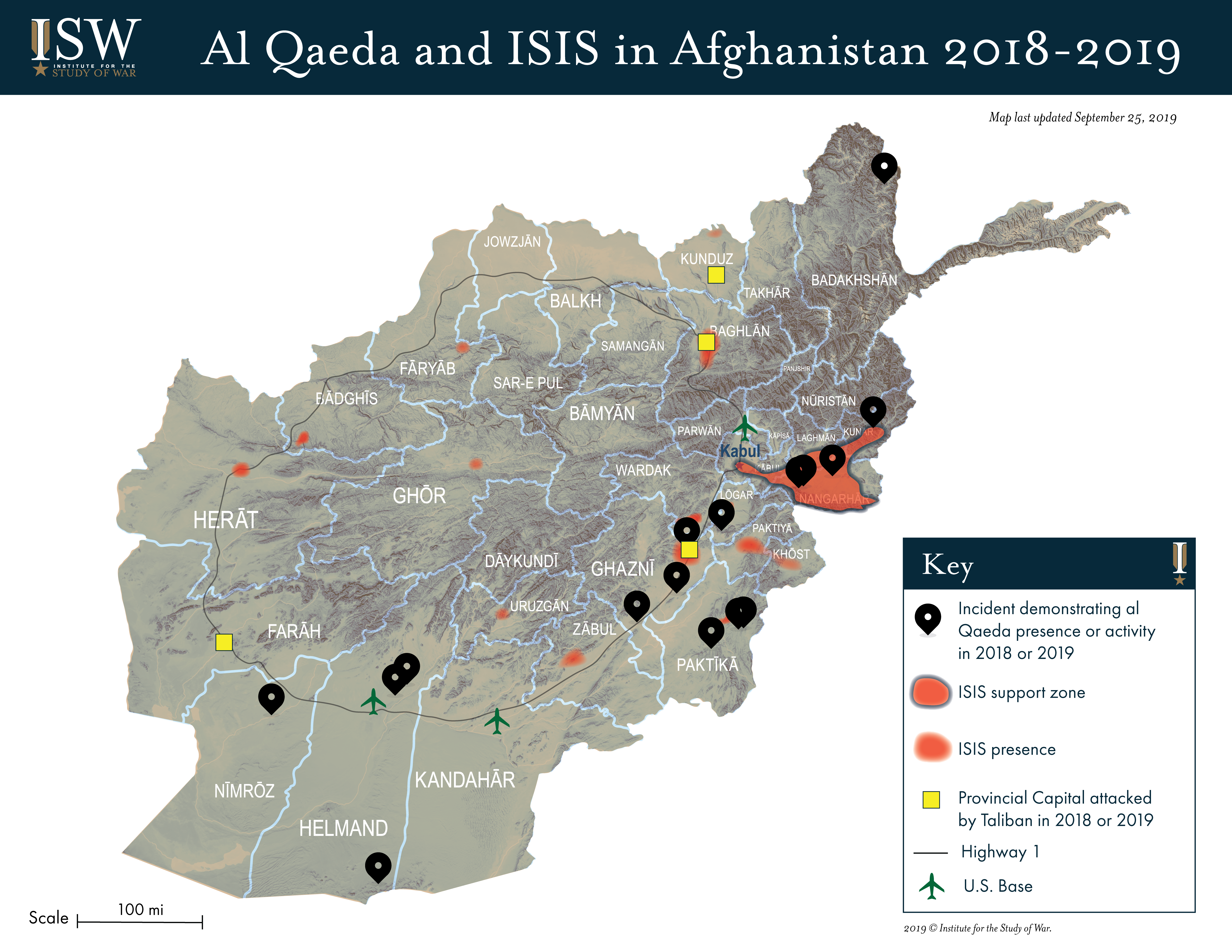