A Kenyan member of al Shabaab, al Qaeda’s East African affiliate, was charged in New York this week with planning to conduct a 9/11-style attack. This plot is the latest sign of al Shabaab’s determination to conduct external terror attacks. Unfortunately, trends in East Africa favor al Shabaab and will create more opportunities for the group to strengthen in the coming year. US Africa Command will withdraw most of its 700 troops from Somalia by mid-January. This withdrawal comes as a Somali-Kenyan diplomatic crisis and Ethiopia’s domestic crisis threaten to disrupt counter–al Shabaab operations on the eve of Somalia’s consequential elections.

Salafi-jihadi groups are on the offensive elsewhere in Africa. Boko Haram may have collaborated with a criminal group to kidnap and ransom hundreds of Nigerian schoolboys, echoing the group’s famous kidnapping of the Chibok girls in 2014. An Islamic State–linked insurgency in northern Mozambique also marks the Salafi-jihadi movement’s shift toward southern Africa. 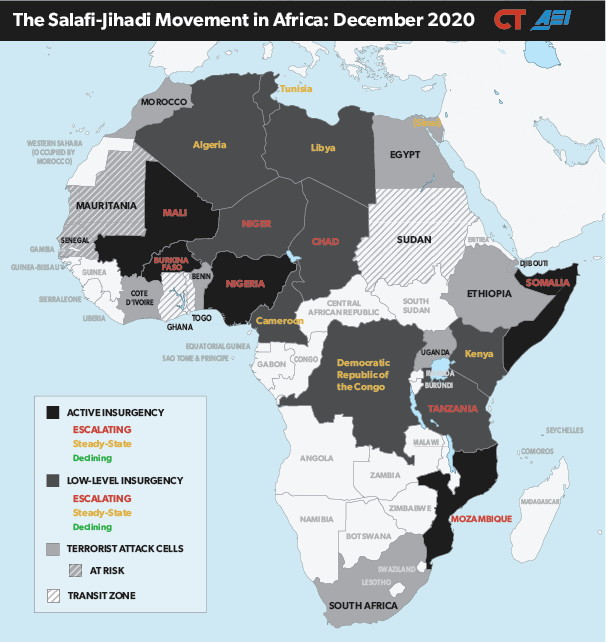 At a Glance: The Salafi-jihadi threat in Africa

The COVID-19 pandemic will hasten the reduction of global counterterrorism efforts, which had already been rapidly receding as the US shifted its strategic focus to competition with China, Iran, North Korea, and Russia. This reduction will almost certainly include Africa. The US Department of Defense is considering a significant drawdown of US forces engaged in counterterrorism missions on the continent. The ongoing shift away from US engagement in the Middle East and Africa will likely continue after the change in presidential administrations in early 2021.

This drawdown is happening as the Salafi-jihadi movement, including al Qaeda and Islamic State affiliates and allies, continues to make gains in Africa, including in areas where previous counterterrorism efforts had significantly reduced Salafi-jihadi groups’ capabilities. The movement was already positioned to take advantage of the expected general reduction in counterterrorism pressure before the pandemic hit. Now, an increasingly likely wave of instability and government legitimacy crises will create more opportunities for Salafi-jihadi groups to establish new support zones, consolidate old ones, increase attack capabilities, and expand to new areas of operations.

The Salafi-jihadi movement is on the offensive in Burkina Faso, Niger, and Mali, where al Qaeda–linked militants are insinuating themselves into local governance while the Malian government is preoccupied with the aftermath of a coup. An Islamic State–linked insurgency has also developed rapidly in northern Mozambique and is spilling over into Tanzania. Ethiopia’s civil war, ignited in November 2020, will lift pressure from al Shabaab in Somalia and will likely create new opportunities for the Salafi-jihadi movement, particularly if the Ethiopian crisis becomes a prolonged regional conflict. Salafi-jihadi insurgencies are also stalemated in Nigeria and persisting amid the war in Libya. Current conditions—including mass anti-government protests in Nigeria and a fragile cease-fire in Libya—will likely evolve in the Salafi-jihadi movement’s favor in the coming year.

Counterterrorism efforts in Somalia and Mali rest on the continued efforts of international coalitions, support for which is eroding in both host and troop-contributing countries and on local partners that have demonstrated their inability to govern effectively or establish legitimacy in their people’s eyes. Mali’s coup and its aftermath will also disrupt international and regional counterterrorism efforts and coordination. Libya’s civil war, which has been subsumed by overlapping regional conflicts, will likely remain a simmering conflict that will fuel the conditions of a Salafi-jihadi comeback.

Amid these conditions, US Africa Command is shifting its prioritization from the counterterrorism mission to great-power competition, a move that coincides with efforts to reduce risk after a 2017 attack killed four servicemen in Niger. US and European powers aim to turn over counterterrorism responsibilities to regional forces of limited effectiveness—such as the G5 Sahel, which is plagued by funding issues, and the African Union Mission in Somalia, which is beginning a scheduled drawdown. The withdrawal of most US troops from Somalia by January 2021 will hasten the lifting of pressure from al Shabaab.

The Salafi-jihadi movement has several main centers of activity in Africa: Mali and its environs, the Lake Chad Basin, the Horn of Africa, Libya, and now, northern Mozambique. These epicenters are networked, allowing recruits, funding, and expertise to flow among them. The rise of the Salafi-jihadi movement in these and any other places is tied to the circumstances of Sunni Muslim populations. The movement takes root when Salafi-jihadi groups can forge ties to vulnerable populations facing existential crises such as civil war, communal violence, or state neglect or abuse (all now likely to be exacerbated by the pandemic). Local crises are incubators for the Salafi-jihadi movement and can become the basis for future attacks against the US and its allies.

An al Shabaab pilot trained to conduct a 9/11-style attack. A New York City court indicted Kenyan al Shabaab operative Cholo Abdi Abdullah on December 16. Abdullah was arrested in 2019 in the Philippines, where he completed testing for a piloting license. He intended to hijack a commercial plane and crash it into a building in a US city. Another al Shabaab operative was apprehended while taking flying lessons in an African country in the past two years.

This plot is part of an uptick in al Shabaab activities targeting US interests. Al Shabaab attacked US forces in Kenya for the first time in January 2020, killing three Americans.  The US is currently drawing down its military footprint in Somalia under orders from the Donald Trump administration to withdraw most of the 700 US troops in the country by mid-January.

Ethiopia’s conflict has also led to infighting among Ethiopian troops in central Somalia, giving al Shabaab an opportunity to exploit weakened forces and raid an Ethiopian military base. Ethiopian troops attempted to disarm their ethnic Tigray counterparts at a military base in Hiraan region’s Halgan area on December 6. The clash killed 21 ethnic Tigray soldiers and wounded 20 others of various ethnicities. Al Shabaab reportedly *attacked the forces following the dispute, possibly to acquire weapons from the base.

Forecast: Al Shabaab will increase its territorial reach and rate of attacks in the coming weeks in central Somalia’s Hiraan region if Ethiopian forces continue to weaken. Al Shabaab previously capitalized on Ethiopian troop withdrawals from central Somalia in 2016. (As of December 17, 2020)

Kenya also *hosted the leader of self-declared Somaliland on December 14, triggering the SFG to sever diplomatic ties with Kenya on December 15. The SFG Information Minister ordered all Kenyan diplomats to leave Somalia by December 22. The SFG’s strained relations with Kenya may lead to clashes between SFG and Jubbaland state forces, which Kenya backs, in southern Somalia. SFG and Jubbaland forces previously clashed in Jubbaland’s Gedo region after SFG troops deployed to Gedo during disputed regional elections in 2019.

Renewed clashes between the SFG and Kenyan-backed Jubbaland state forces may present al Shabaab with attack opportunities in Jubbaland and possibly Kenya. Al Shabaab exploited tensions between the SFG and Jubbaland leadership in early 2020 after SFG troops *seized two districts in Jubbaland’s Gedo region in early February. Al Shabaab may now seek to advance in Jubbaland and stage attacks in southeastern Kenya. The group *has conducted at least three such attacks this month since Somali-Kenyan tensions escalated, compared to one *failed attack in the region in September.

The Ethiopian federal government is taking control of governance and service provision in Mekelle. International humanitarian aid arrived in Mekelle on December 12 for the first time since fighting in Tigray began. This breakthrough came after the Ethiopian government revisited an agreement with the UN to give humanitarian aid agencies access to government-controlled territory in Tigray. A federally appointed interim administration *took office in Mekelle on December 13.

A cohort of southern African countries will hold a summit to address Mozambique's security challenge in January 2021.

The Libyan National Army (LNA) may be preparing to resume hostilities to secure its interests and disrupt UN-led negotiations. An LNA-affiliated militia attempted to seize a Government of National Accord (GNA) military base in southwestern Libya on December 6. This attack follows days of LNA military training in northern Libya.

LNA forces also seized a Turkish vessel en route to Misrata in western Libya on December 8. The LNA released the vessel after Turkey’s foreign minister warned of retaliation against those who threatened Turkish interests in Libya. Turkey is the UN-recognized GNA’s main military backer. The LNA may not currently have the capacity to engage with Turkey and likely released the vessel to avoid escalating tensions.

These events indicate that the LNA may be preparing to secure its interests militarily if ongoing UN-led talks threaten its interests. A UN-brokered cease-fire began on October 23.

Boko Haram may have recruited a local gang or collaborated with one to conduct the kidnapping. Alternately, Boko Haram may have claimed the attack to gain publicity and possibly share the ransom money. Boko Haram’s leader Abubakr Shekau claimed the attack on December 15, stating the group kidnapped students because Western education goes against Islam and claiming to hold more than 500 students.[1] Boko Haram released another video allegedly featuring the kidnapped schoolboys on December 17.

Boko Haram famously attacked a school in Chibok in northeastern Nigeria in 2014, kidnapping over 200 students. The group enslaved the girls and killed boys or enlisted them as Boko Haram soldiers in the 2014 attack. Boko Haram gained publicity from the Chibok attack at a time when the group was strengthening and expanding its territorial control. The December 2020 attack in Katsina differed from Chibok because the attackers did not kill any male students

If Boko Haram collaborated with a group in Katsina, the kidnapping indicates an indirect expansion of the group’s influence into northwestern Nigeria. Boko Haram has also recently escalated attacks on civilians in its usual area of operations in Borno state, including a large massacre of farmers in late November.

The Islamic State’s West Africa Province (ISWA) is expanding its area of operations around Lake Chad. ISWA militants attacked Chadian military boats on the western edge of Lake Chad on December 1, killing 30 soldiers.[2] ISWA has conducted three waterborne attacks on Chadian soldiers since November. The group previously released media about attacks on Chadian forces that highlighted its crossing of the “artificial border” between Nigeria and Chad.[3]

ISWA militants also killed 27 civilians on the day of parliamentary elections in southeastern Niger on December 13 after *swimming to the shore. Boko Haram also claimed this attack, but ISWA more often operates in this area and is likely responsible.

ISWA is targeting aid workers to gain access to resources and establish control of local populations. ISWA has been attacking aid workers throughout 2020 by setting up fake checkpoints in northeastern Nigeria. ISWA militants used a fake checkpoint on the road linking Borno state’s capital Maiduguri and Mainok village to abduct two Red Cross staff members on December 9.[4] The Islamic State designated humanitarian agencies as legitimate targets a few weeks after militants from ISWA’s Sahel branch captured and executed six French aid workers in August. Aid workers tend to be unarmed and assist in transporting supplies to disadvantaged villages. Attacks on aid workers may be intended to gain resources and fit a trend toward brutal propaganda from Islamic State affiliates in West Africa.

Forecast: ISWA will expand beyond its traditional area of operations and become increasingly active in northwestern Nigeria and along Lake Chad shorelines. Its main base of control will remain in Borno state, however. Boko Haram will continue large-scale attacks in northwestern Nigeria and will draw resources from ransoming kidnapped students. (Updated December 16, 2020)