Russian forces continue to face widespread force generation challenges. A senior US defense official stated on May 9 that the US has not observed any indicators of a “new major Russian mobilization” and that members of the private military company Wagner Group “urgently” requested hundreds of thousands of additional troops to reinforce Russian efforts in Donbas.[1] The official noted that Russia currently has 97 battalion tactical groups (BTGs) in Ukraine, but that BTGs have been moving in and out of Ukraine to refit and resupply, suggesting that Russian troops continue to sustain substantial damage in combat.[2] ISW has previously assessed that most Russian BTGs are heavily degraded and counting BTGs is not a useful metric of Russian combat power.[3] The Main Ukrainian Intelligence Directorate (GUR) claimed that under-trained, ill-equipped Russian conscripts are still being sent into active combat despite the Kremlin denying this practice.[4] A prisoner of war from the BARS-7 detachment of the Wagner Group claimed that a ”covert mobilization” is underway in Russian to send conscripts to clean damage caused by combat in the self-proclaimed Donetsk and Luhansk People’s Republics.[5]

Russian troops in Ukraine continue to display low morale and poor discipline as fighting in many areas has stalled out against Ukrainian resistance. A senior US defense official claimed that Russian troops in Donbas are failing to obey orders from top generals.[6] Russian forces deployed to the Zaporizhzhia area reportedly are experiencing very low morale and psychological conditions, complain about the ineffectiveness of operations in the area, frequently abuse alcohol, and shoot at their own vehicles in order to avoid going to the frontline.[7] This is consistent with reports made by the Ukrainian General Staff that the extent of Russian losses is having widespread impacts on the willingness of Russian troops to engage in offensive operations.[8]

Russian authorities are likely setting conditions to integrate occupied Ukrainian territories directly into Russia, as opposed to creating proxy “People’s Republics.” The Kherson occupation Deputy Chairman of Military Civil Administration Kirill Stremousov stated on May 9 that the Kherson region intends to become part of Russia and that Kherson authorities do not intend to hold a referendum to create an independent republic.[9] Spokesperson for the Ukrainian Defense Ministry Oleksandr Motuzyanyk reported that Russian occupation authorities are intensifying reconnaissance measures and increasing checkpoints and patrols in occupied areas in order to prepare to integrate these regions directly into Russia.[10] Motuzyanyk noted that Russian and Crimean groups have been arriving to occupied regions to intensify propaganda measures to prepare for integration. ISW will publish our assessment of the Kremlin’s most likely course of actions towards their occupied territories in Ukraine in the coming days. 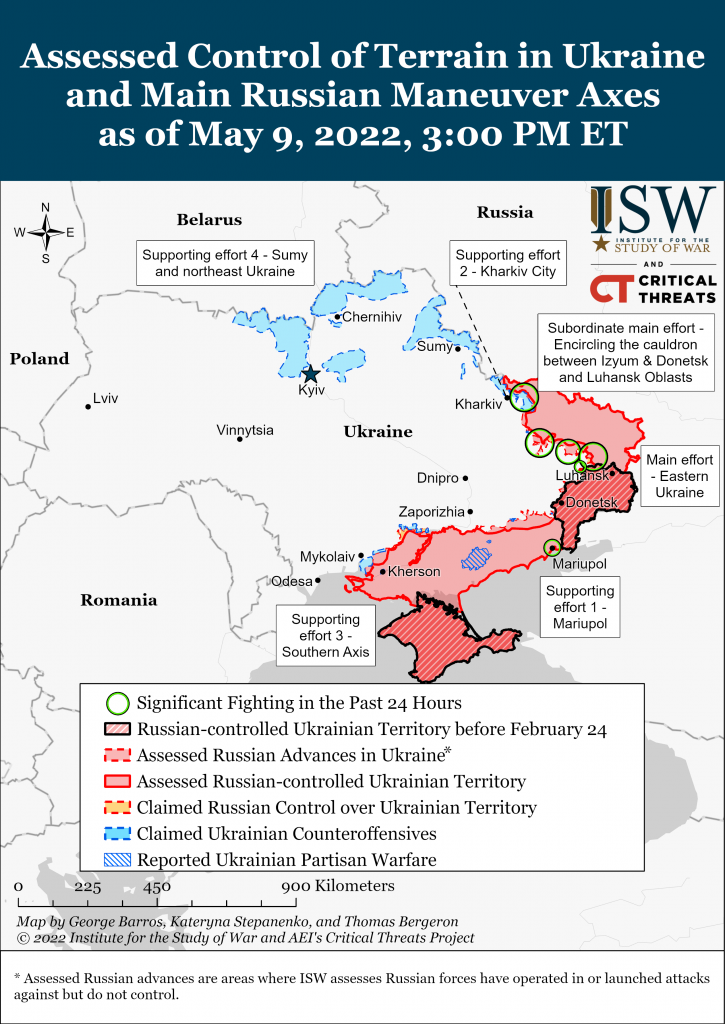 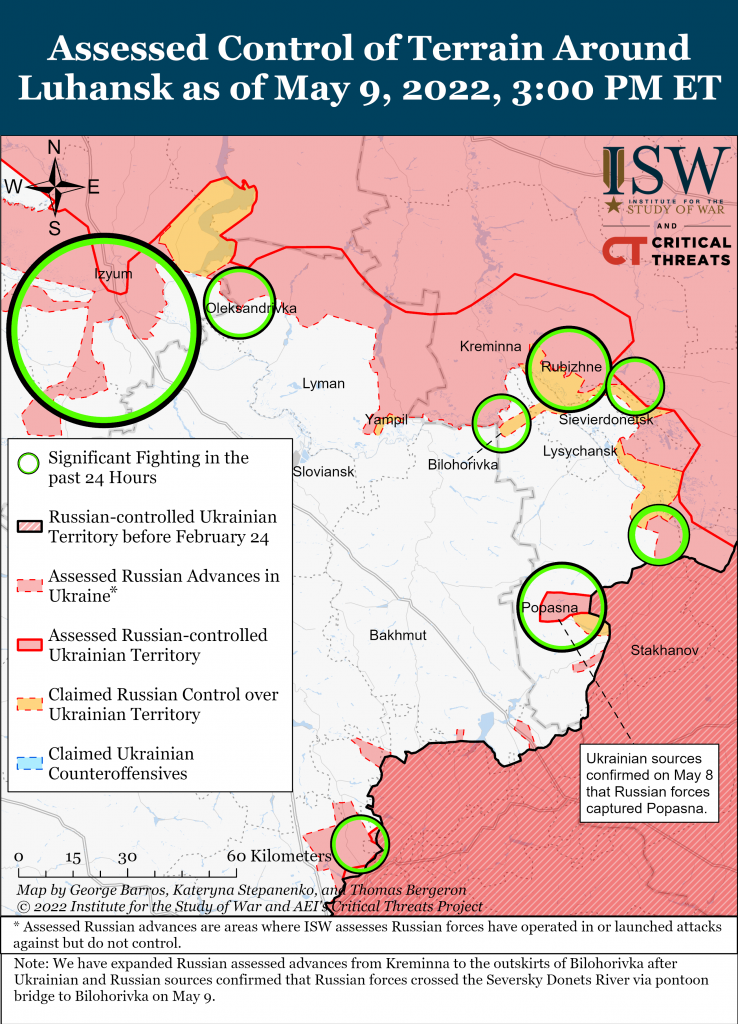 Russian forces did not make any confirmed advances to the southeast or southwest of Izyum on May 9 but are likely attempting to concentrate the forces necessary to resume offensive operations in the coming days. Russian troops are likely reprioritizing a push southeast of Izyum towards Slovyansk after focusing on advancing southwest to Barvinkove in the past few weeks. The Ukrainian General Staff stated that elements of the Russian Airborne Forces (VDV), 1st Tank Army, 20th Combined Arms Army of the Western Military District, and 29th, 35th, 36th Combined Arms Armies and 68th Army Corps of the Eastern Military District are preparing for an offensive south of Sulyivka (about 25 kilometers south of Izyum) towards Nova Dmytrivka and Kurulka, both of which lie within 10 kilometers of the border between Kharkiv and Donetsk Oblasts.[11] A senior US defense official notably reported that Russian forces are conducting artillery strikes and ground attacks southeast of Izyum to drive towards Lyman and Slovyansk, but that Ukrainian resistance in this area has confined Russian advances to gains in the "single digits” of miles.[12]

Russian forces continued attacks westward in Donetsk and Luhansk Oblasts and made marginal gains around Severodonetsk on May 9. Troops of the self-proclaimed Luhansk People’s Republic (LNR) reportedly captured Nyzhnje and are fighting for control of Toshkivka, about 25 kilometers southeast of Severodonetsk.[13] Ukrainian sources reported fierce fighting around Rubizhne and Vojevodivka, immediately to the north of Severodonetsk and in Bilohorivka, about 25 kilometers west of Severodonetsk.[14] NASA’s Fire Information for Resource Management System (FIRMS) imagery showed fires in the area west of Severodonetsk around Bilohorivka, Pryvillya and Novodruzhesk, likely indicating that Russian forces are shelling Ukrainian positions in this area in order to encircle Severodonesk and Rubizhne from the west and continue to push towards the Donetsk Oblast border.[15] 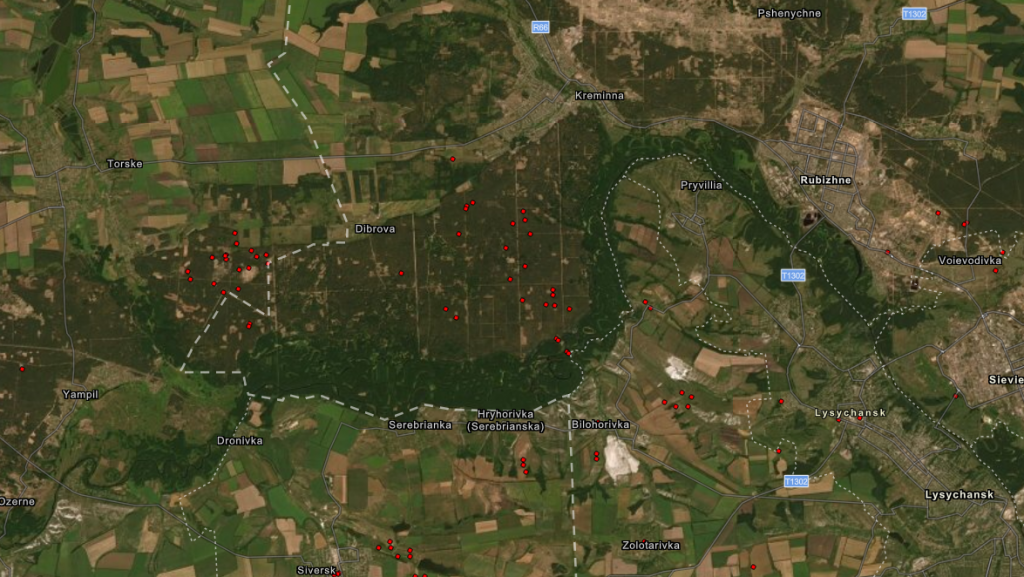 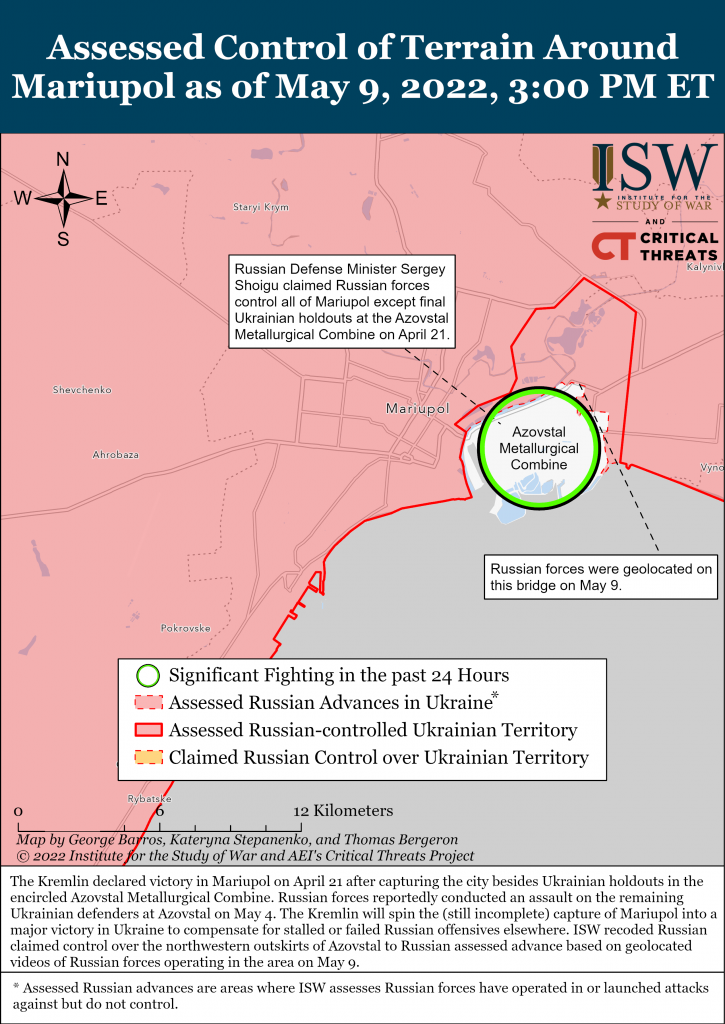 Russian forces continued to conduct artillery strikes and assaults against Ukrainian defenders in the Azovstal Steel Plant on May 9.[16]  A senior US defense official reported that 2 Russian battalion tactical groups (BTGs) remain in Mariupol and continue to storm Azovstal as over a dozen of the BTGs previously deployed to Mariupol are moving into other areas in Donbas, though ISW cannot independently confirm the actual strength of these reported BTGs.[17] Russian forces reportedly blew up a bridge in the northern part of the Azovstal complex previously used to evacuate civilians, indicating that Russian troops have advanced into the northern part of the plant.[18] Russian occupying forces conducted a “Victory Day” parade in Mariupol on May 9, consistent with ISW’s previous forecasts that the city is a focal point of the Kremlin’s occupation narrative.[19] 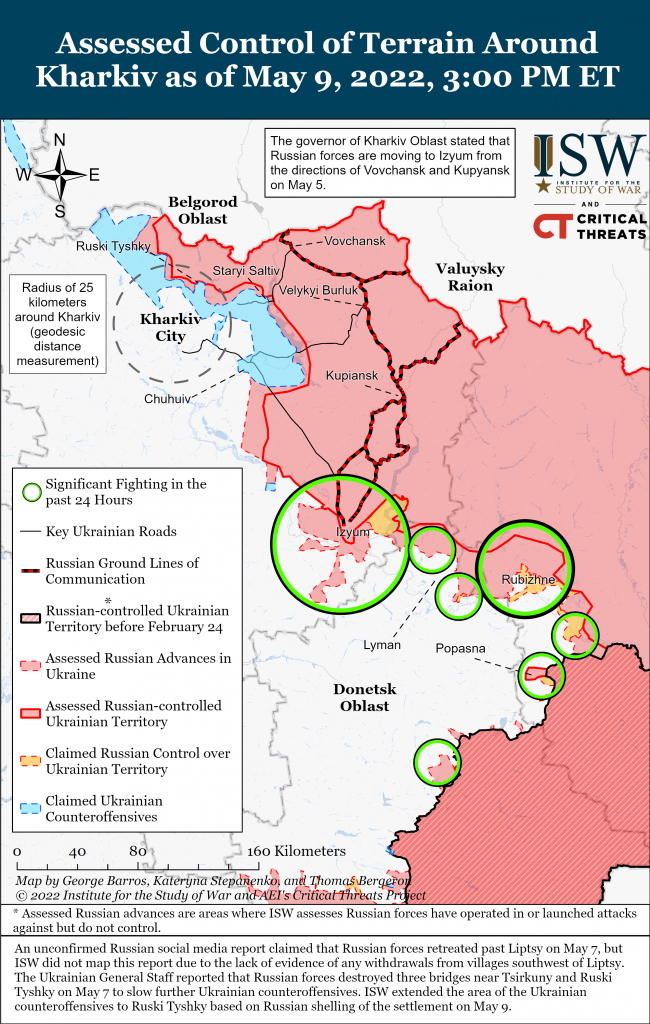 Russian forces are likely continuing to amass troops in Belgorod Oblast to stop Ukrainian counterattacks around Kharkiv City from reaching the Ukrainian-Russian border.[20] A senior US defense official said on May 9 that Russian forces have not abandoned efforts to encircle Kharkiv City from the north and east in “a horseshoe-like shape,” despite having only three battalion tactical groups (BTGs) operating in  northern Kharkiv Oblast.[21] The Ukrainian General Staff reported that Russian forces accumulated 19 BTGs in Belgorod Oblast, which could reinforce the Kharkiv City axis.[22]

ISW cannot confirm if Russian forces withdrew past Ruski Tyshky, a settlement approximately 18 northeast kilometers of Kharkiv City.[23] The senior US defense official said that Ukrainian forces pushed Russian forces nearly 48 kilometers east in the past week, likely referring to the Ukrainian liberation of Staryi Saltiv on May 2.[24] Pro-Russian Telegram channels posted images of Victory Day celebrations in occupied Kozacha Lopan, despite previous unconfirmed reports that Ukrainian forces were fighting near the settlement on May 7.[25] 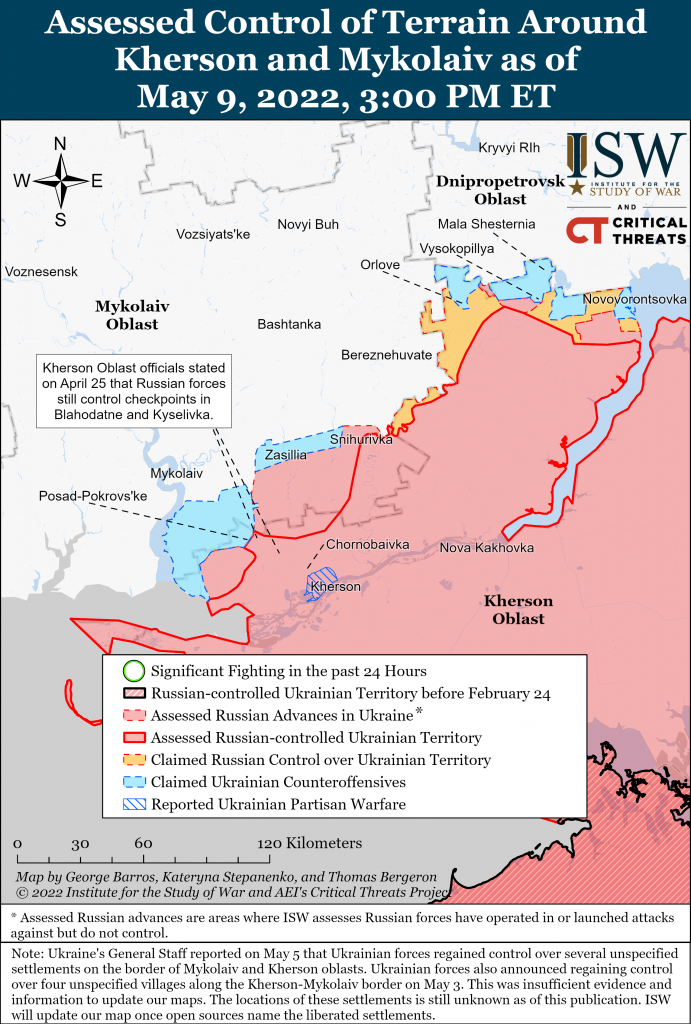 Russian forces did not conduct any confirmed offensive operations in southern Ukraine on May 9 but continued to shell and launch missile strikes to pin Ukrainian troops and prevent them from transferring to other axes.[26] The Ukrainian Genral Staff reported that Russian units in Zaporizhia Oblast are regrouping and will likely receive reinforcements from forces previously deployed in Mariupol.[27] Russian forces will likely reinforce units pushing toward Zaporizhia City and Donetsk Oblast due to the reports of an ineffective offensive around Huliaipole.[28] Satellite imagery from May 6 also showed that Russian forces have significantly increased their concentrations of military equipment and anti-aircraft and missile systems in southwestern Kherson Oblast since April 27, likely due to newly resumed railway connection with Crimea.[29] Russian forces may have paused offensive operations in Southern Ukraine on May 9 due to Victory Day celebrations in occupied areas.[30]

Russian forces continued to target Odesa with missile strikes on May 8 and 9.[31] An unnamed US defense official said that Russia has no ability to threaten Odesa from the sea and the ground, despite consistent missile strikes and ongoing aerial reconnaissance.[32] Russian forces will likely continue to shell Odesa but are unlikely to inflict significant damage or resume advances towards the city. The official also noted that the US has no confirmation that Ukrainian forces recaptured Snake Island, off the coast of Odesa Oblast.[33] Russian and Transnistrian sources claimed Ukrainian forces closed the border with Moldova on May 9 amidst growing tensions in Transnistria, although ISW cannot independently verify this claim.[34]