Russian forces did not make any significant advances on any axis of advance on May 8. The Ukrainian counteroffensive northeast of Kharkiv City has likely forced Russian troops to redeploy to Kharkiv instead of reinforcing stalled Russian offensive operations elsewhere in eastern Ukraine. Russian forces are continuing their attempt to reach the administrative borders of Donetsk and Luhansk oblasts but have not made substantial territorial gains since securing Popasna on May 7. 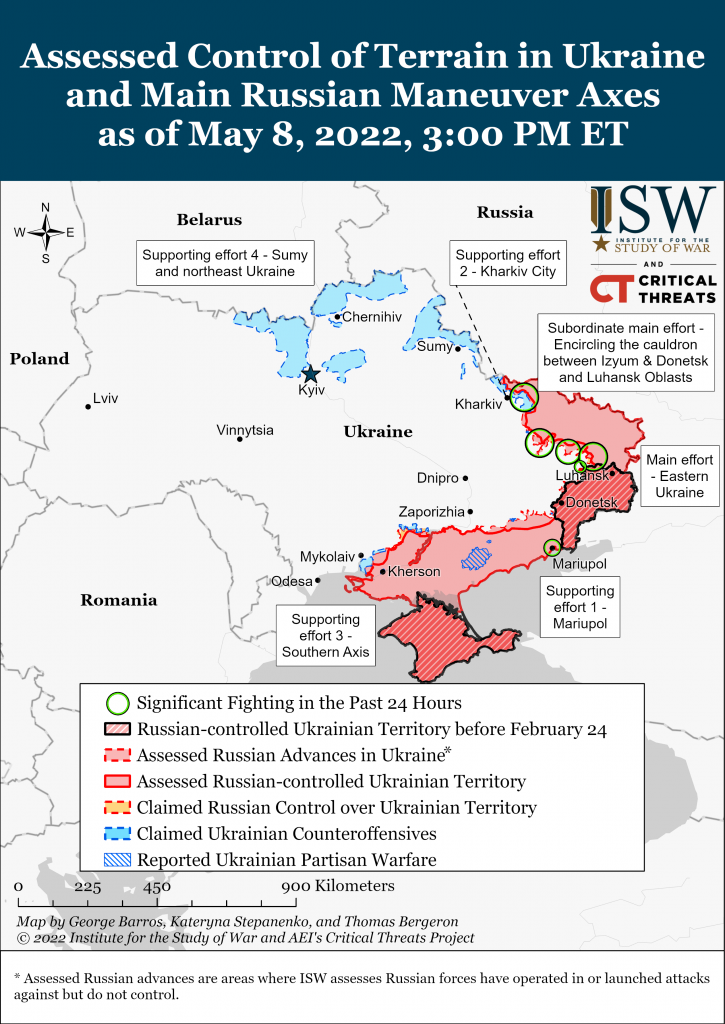 Russian forces did not conduct confirmed attacks in any direction from Izyum on May 8. The Ukrainian General Staff stated that Russian forces continued to regroup units, replenish reserves, and reconnoiter Ukrainian positions to continue offensives in the Izyum-Barvinkove and Izyum-Slovyansk directions.[1]

Russian forces intensified ground, air, and artillery attacks in Donetsk and Luhansk oblasts on May 8. Ukrainian sources reported that Ukrainian forces withdrew from Popasna, confirming that Russian forces established full control of the city in the last few days.[2] The Ukrainian General Staff stated that Russian forces are attempting to reach the administrative borders of Luhansk and Donetsk oblasts, which is confirmed by social media footage of ongoing fighting along existing Russian lines of advance.[3] Ukrainian sources reported active fighting in Bilohorivka, Vojevodivka, and Lysychansk, indicating that Russian forces may intend to encircle Severodonetsk from the south (in support of ongoing operations in Rubizhne, north of Severodonetsk) and push west toward the Luhansk Oblast border.[4] The Ukrainian General Staff additionally reported that elements of the Russian 90th Tank Division are operating around Lyman in the vicinity of Shandryholove and Oleksandrivka, which both lie less than 20 kilometers from the Donetsk Oblast border. [5] 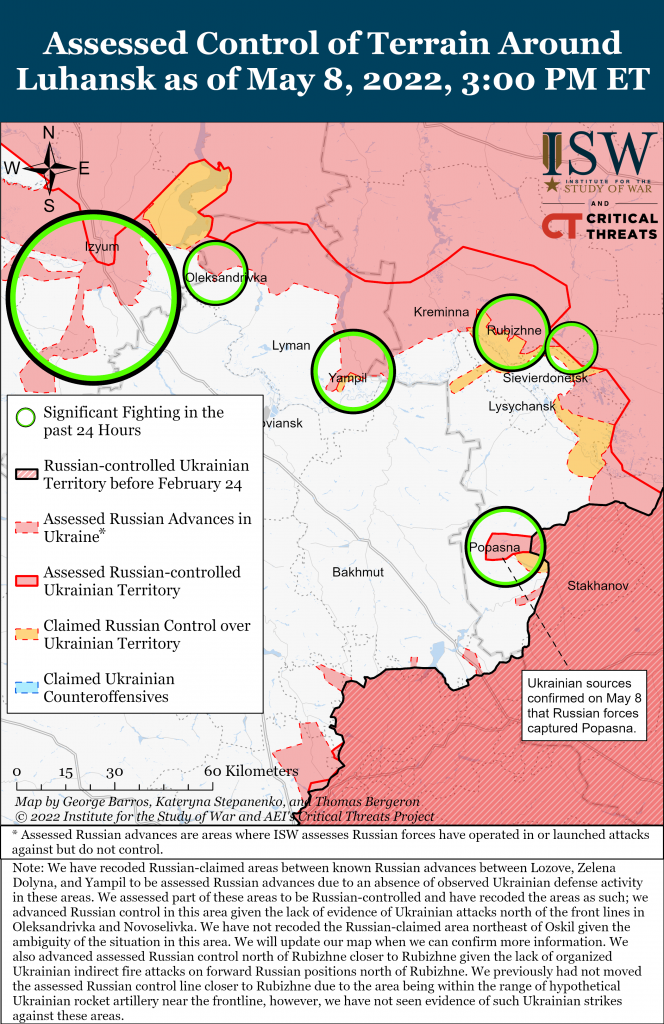 Russian forces continued to conduct offensive operations in the Azovstal Steel Plant on May 8. Commander of the Azov Regiment Denis Prokopenko stated that the Ukrainian defense remains in Azovstal after the evacuation of all civilians and that fighting is ongoing within parts of the plant itself.[6]

Russian authorities are advancing efforts to integrate Mariupol into Russian economic systems. Head of the self-proclaimed Donetsk People’s Republic (DNR) Denis Pushilin visited Mariupol’s commercial port alongside Russian Deputy Prime Minister for Construction and Regional Development Marat Khusnullin on May 8 and claimed that products will start moving through the port later this month.[7] Khusnullin’s visit to Mariupol is likely indicative of the Kremlin’s broader desire to capitalize on Mariupol’s port access and integrate the city’s transport capabilities into Russia’s regional economic agenda. 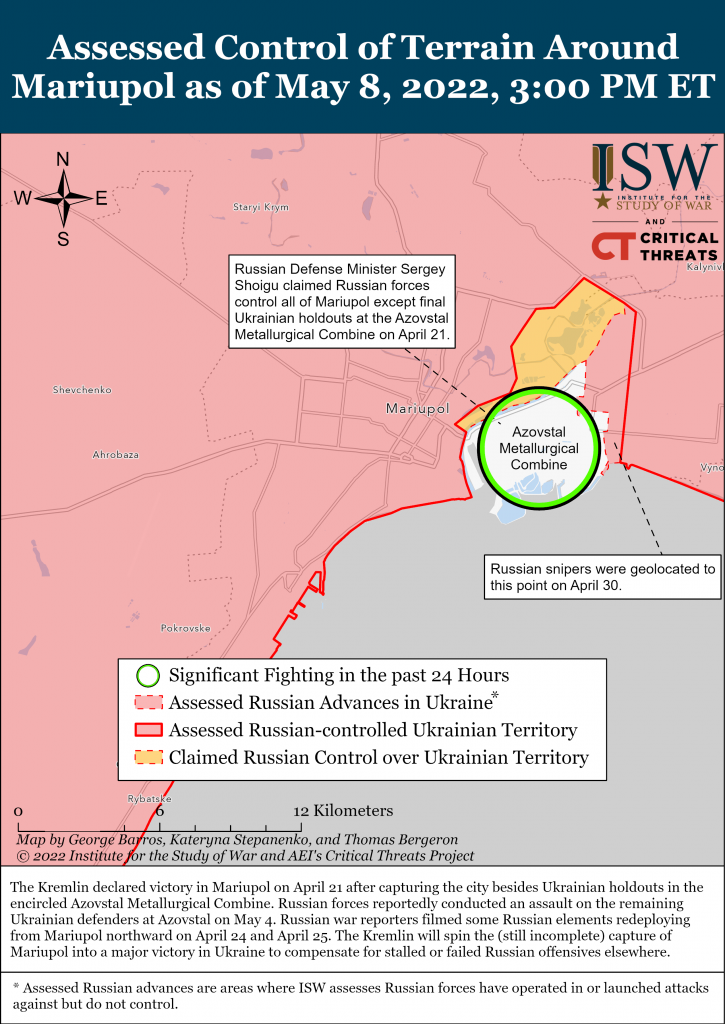 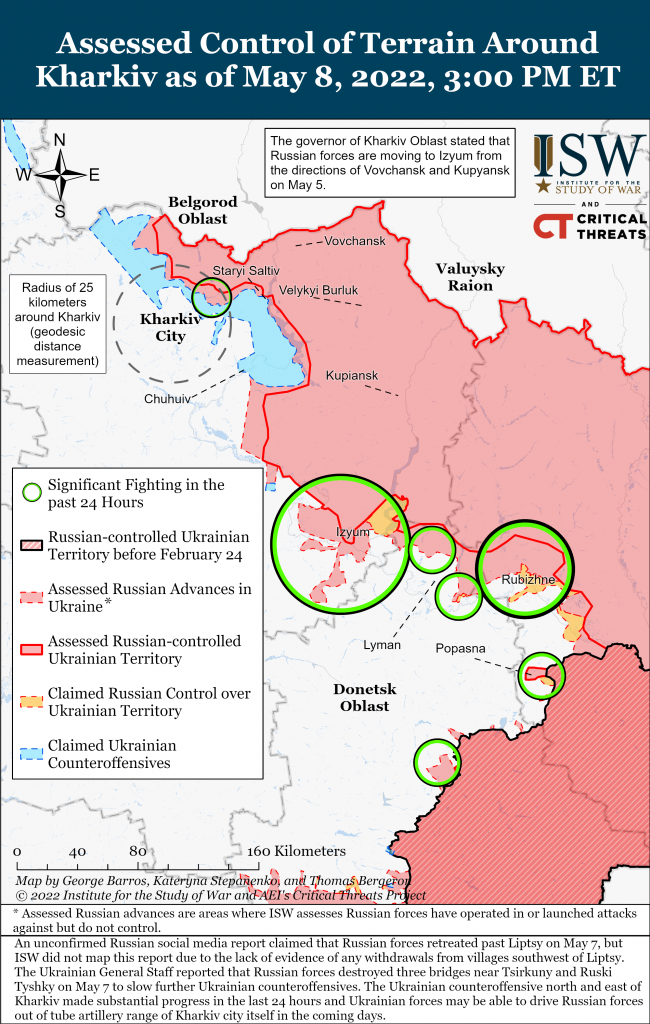 Russian forces did not make any confirmed ground attacks on the Southern Axis on May 8. The Ukrainian General Staff reported that Russian forces may be preparing for a potential offensive in order to improve their tactical positions and fix Ukrainian forces in place.[11] Russian forces focused on reconnaissance and regrouping frontline units in likely preparation to renew offensive operations on the Southern Axis, although the likelihood of their ability to do so successfully is doubtful.[12] Satellite imagery notably showed Russian forces concentrating anti-aircraft missile forces and multiple launch rocket systems (MLRS) in Filatovka, northern Crimea, between April 27 and May 5.[13] Such reconnaissance and renewal measures indicate that Russian troops are preparing to restart offensive operations, likely in the direction of Zaporizhia and Kryvyi Rih, in the coming days.

Russian forces additionally continued to target Odesa with missile strikes on May 8.[14] The situation in Transnistria remains tense but unchanged. [15] 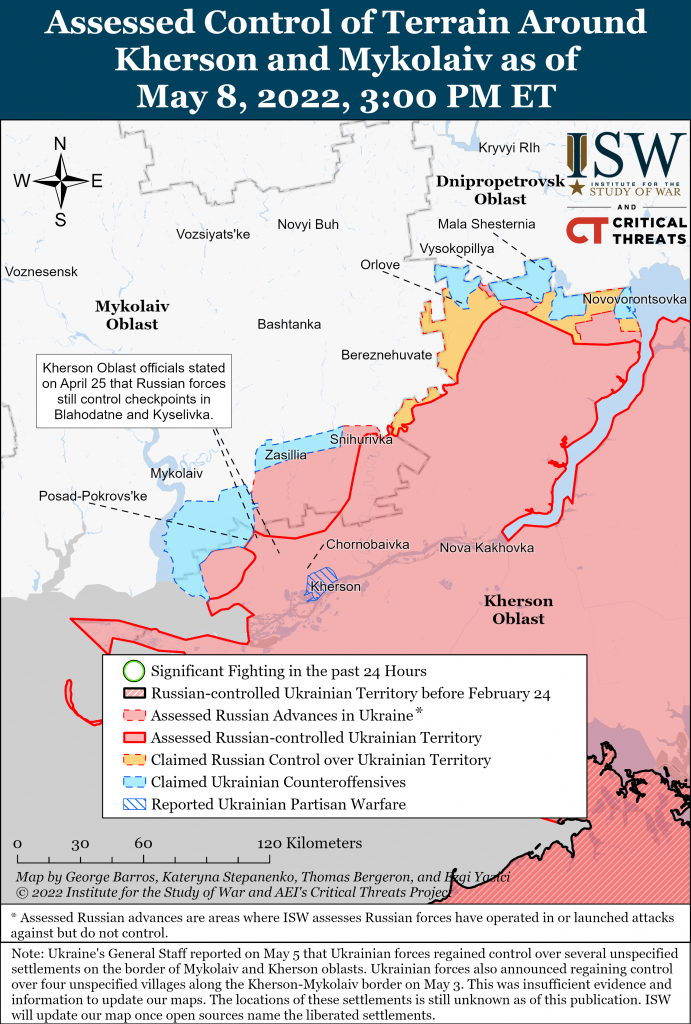 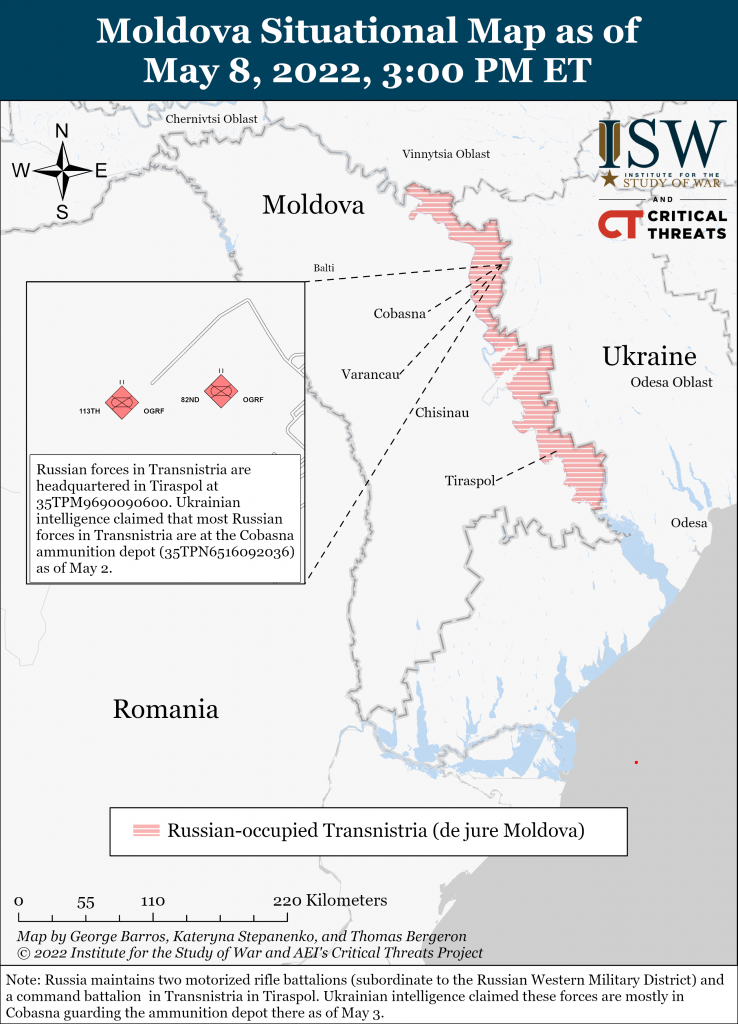