The Ukrainian counteroffensive northeast of Kharkiv is making significant progress and will likely advance to the Russian border in the coming days or weeks. Russian forces may be conducting a limited withdrawal in the face of successful Ukrainian attacks and reportedly destroyed three bridges to slow the Ukrainian advance. Armies generally only destroy bridges if they have largely decided they will not attempt to cross the river in the other direction anytime soon; Russian forces are therefore unlikely to launch operations to retake the northeast outskirts of Kharkiv liberated by Ukrainian forces in the near future. Russian forces previously destroyed several bridges during their retreat from Chernihiv Oblast—as did Ukrainian forces withdrawing in the face of the Russian offensive in the initial days of the war.

By all indications, Russian forces will announce the creation of a Kherson People’s Republic or possibly forcibly annex Kherson Oblast in the near future and are intensifying occupation measures in Mariupol. Russian forces are reportedly increasing their security presence in both Kherson and Mariupol, including withdrawing personnel from frontline combat units to protect Russian dignitaries in Mariupol. Donetsk People’s Republic (DNR) Leader Denis Pushilin arrived in Kherson on May 6, and local occupation officials stated the region will “strive to become a subject of Russia” and “will resemble something close to Crimea in terms of the pace of development,” echoing longstanding rhetoric used by Russia’s existing proxies in eastern Ukraine. As ISW has previously assessed, the Kremlin will likely form illegal proxy republics or directly annex occupied areas of southern and eastern Ukraine to cement its occupation administration and attempt to permanently strip these territories from Ukraine. 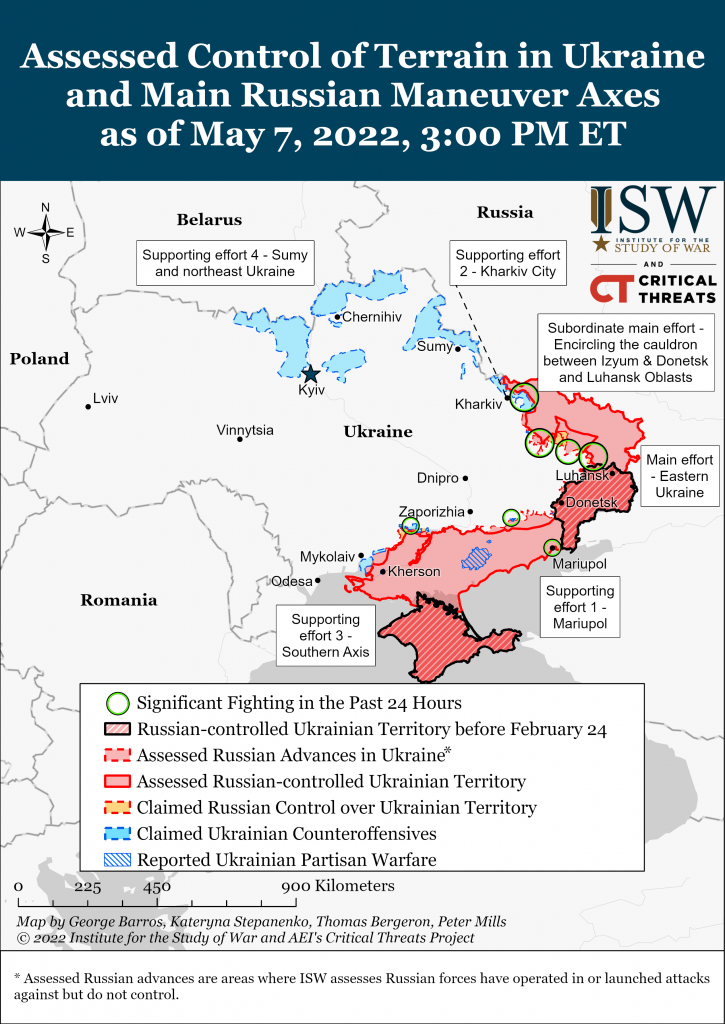 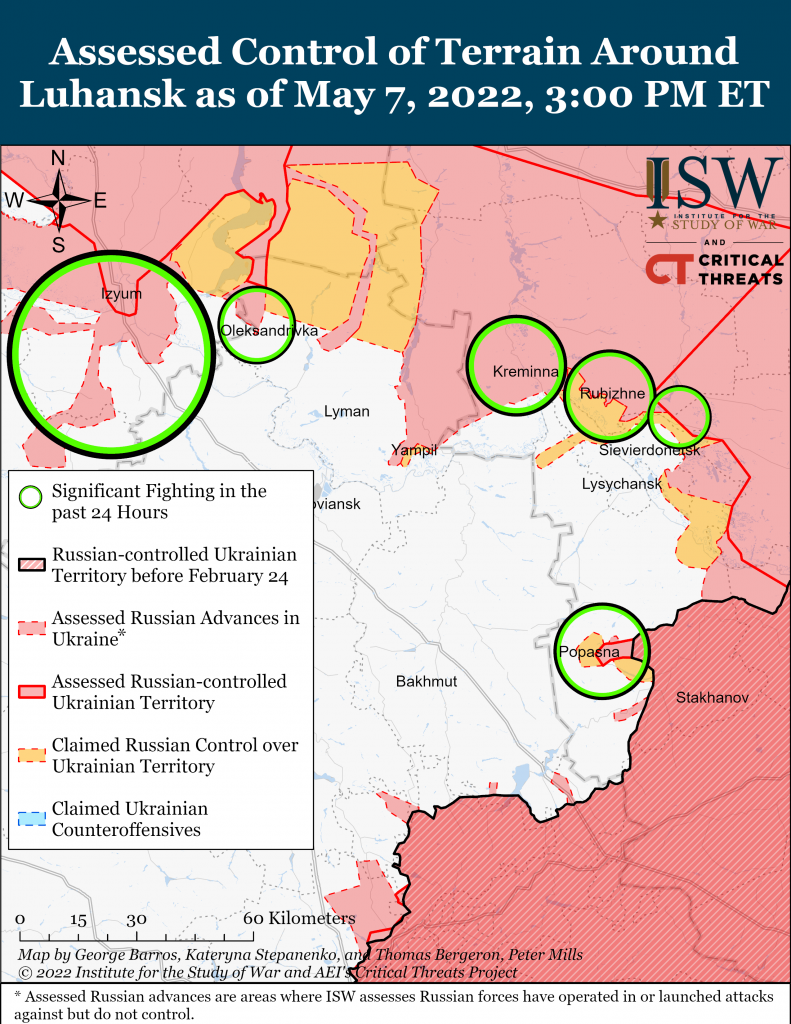 Ukrainian forces continued to repel Russian advances toward Barvinvoke (southwest of Izyum) on May 7, and Russian forces have likely abandoned efforts to drive directly southeast toward Slovyansk. The Ukrainian General Staff reported that Russian forces launched an unsuccessful attack on Virnopillya (approximately 25 km southwest of Izyum) on May 7 and images on social media depicted several destroyed Russian armored vehicles and tanks.[1] Ukrainian forces likely repelled further Russian attacks directly west of Izyum in the villages of Zavody and Velyka Komyshuvakha, as evidenced by drone footage released by Ukrainian forces.[2] Satellite imagery depicted fires just northwest of Izyum on May 6 that may indicate ongoing shelling.[3] However, ISW has not observed any footage or imagery of Ukrainian advances, the Ukrainian General Staff has not claimed any Ukrainian attack toward Izyum, and we cannot confirm at this time if Ukrainian forces are conducting an offensive toward Izyum concurrent with the ongoing offensive around Kharkiv, as discussed below.[4] ISW will continue to monitor the area and provide updates if we obtain concrete indicators of a Ukrainian counteroffensive in this area. 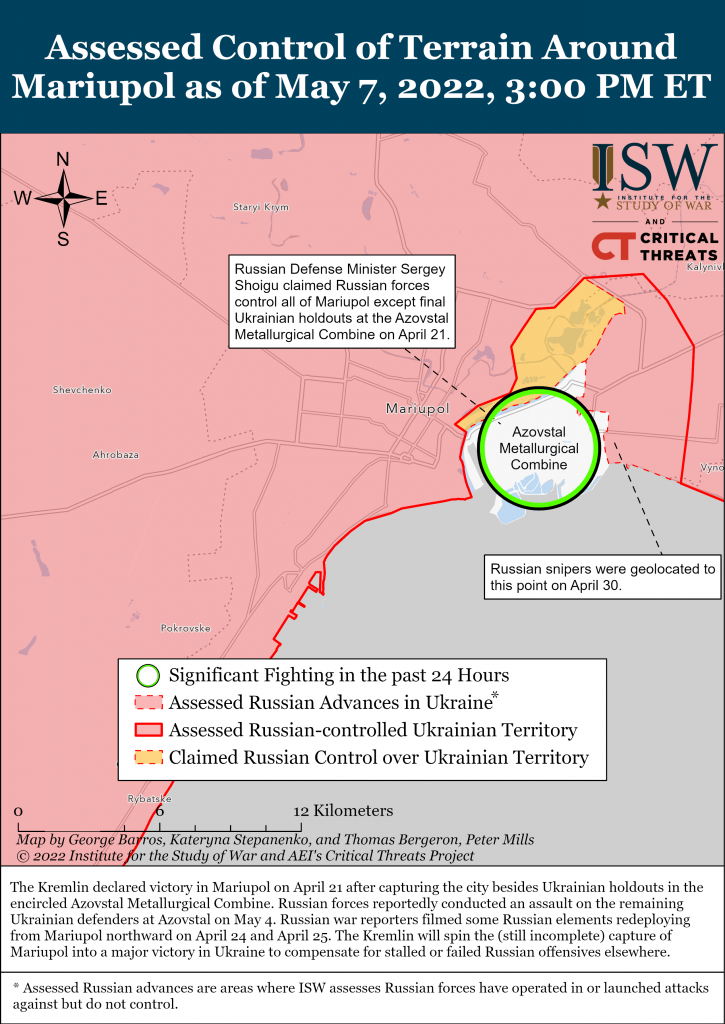 The Ukrainian government confirmed that the last remaining civilians trapped in the Azovstal plant evacuated on May 7, though an unknown number of Ukrainian defenders remain in the facility.[9] The DNR and Russian media falsely claimed that some Ukrainian defenders surrendered to Russian forces under white flags, but Ukrainian units inside the plant denied the claim and stated both sides raised white flags to mark the evacuation route for civilians.[10] The remaining Ukrainian units in Azovstal appear unlikely to surrender, and Russian forces continued assaults on the facility.[11] We will likely be unable to report any discrete changes in control of terrain until Russian forces capture the plant as a whole due to the poor information environment in Mariupol and lack of direct imagery or video of fighting inside the facility.

Ukrainian sources reported further Russian preparations for a Victory Day celebration in Mariupol, including increased security. The Ukrainian Main Intelligence Directorate (GUR) reported on May 7 that Russian commanders are removing officers from combat, including reportedly the command staff of the 71st Motor Rifle Regiment, to protect Kremlin officials and propagandists in Mariupol.[12] The GUR also claimed to have intercepted communications between Russian servicemen complaining of the stupidity of their commanders and the humiliation of being withdrawn for guard duty, but ISW cannot verify either of these claims. Advisor to the Mayor of Mariupol Petro Andryushchenko separately claimed on May 7 that the Russian occupation forces in Mariupol are distributing ribbons and invitations for a May 9 parade in the city center and Primorsky Park.[13] Andryushchenko further reported Mariupol residents are being forced to clear bodies and rubble in order to receive food from Russian forces.[14] 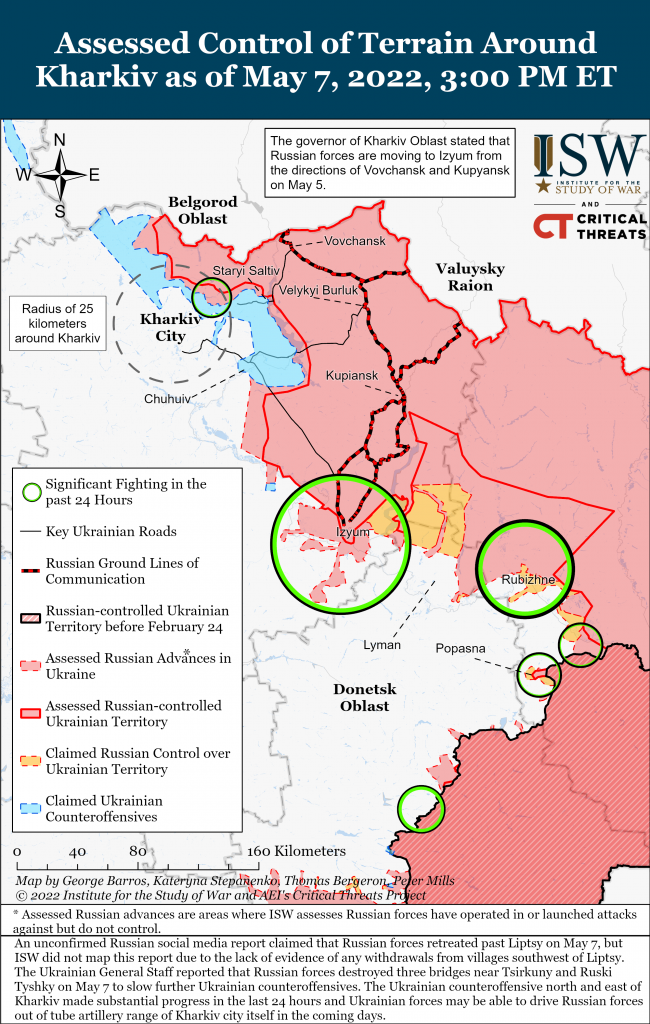 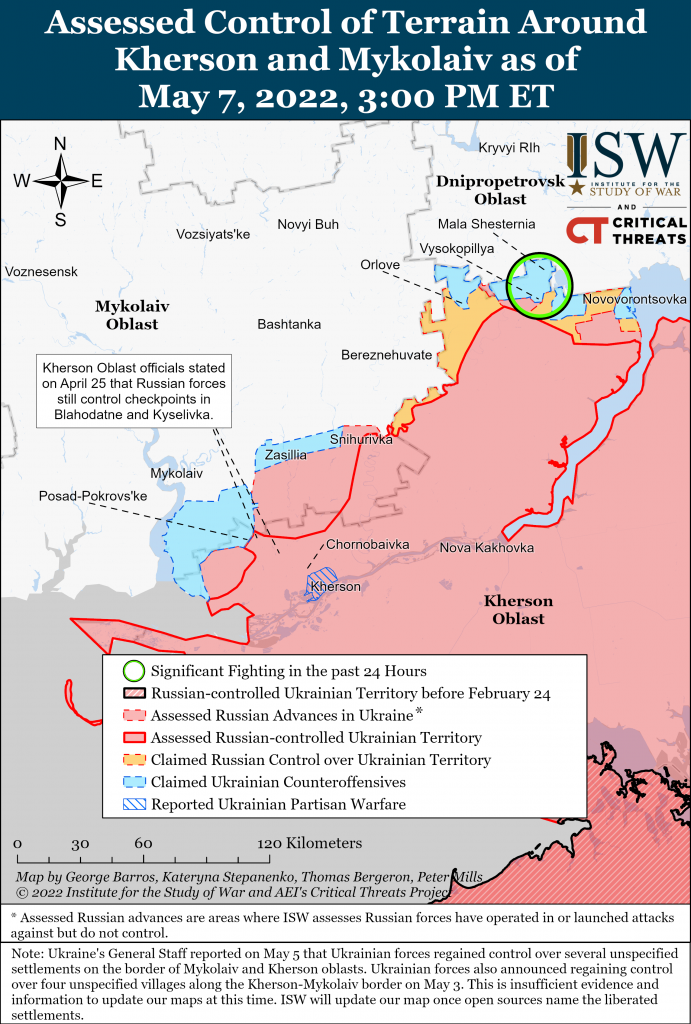 By all indications, Russian forces will announce the creation of a Kherson People’s Republic or possibly directly forcibly annex Kherson Oblast in the coming weeks and possibly as soon as May 9, though the Kremlin is not bound to this date. The Ukrainian General Staff reported Russian forces are taking a number of unspecified measures to strengthen the Russian occupation regime in Kherson and increased the number of checkpoints and foot patrols throughout the city.[19] DNR leader Denis Pushilin arrived in Kherson on May 6.[20] ISW cannot confirm what he did during his visit, though it likely concerned establishing some form of Russian proxy republic. Ukrainian Ombudsperson Lyudmyla Denisova reported on May 7 that the Kremlin plans to grant Kherson residents possible Russian citizenship, as the Kremlin has previously done in the DNR and LNR.[21] Finally, Occupation Deputy Head of the Kherson Region Stremousov reportedly stated that occupied Kherson intends to “live as part of the Russian Federation and will resemble something close to Crimea in terms of the pace of development” and that the region will “strive to become a subject of Russia,” echoing longstanding rhetoric by the DNR and LNR on desired ties with Russia.[22] As ISW has previously assessed, the Kremlin will likely form illegal proxy republics or directly annex occupied areas of southern and eastern Ukraine to cement its occupation administration and attempt to permanently strip these territories from Ukraine.

Russian forces continued to target Odesa with cruise missile strikes and conduct false-flag attacks in Transnistria over the past several days. Ukraine’s Operational Command South reported that Russian aircraft launched four cruise missiles at Odesa Oblast on May 7 and two missiles late on May 6 to exert “psychological pressure” on civilians.[23] Ukrainian sources reported that Russian special services continued to conduct false-flag attacks at key sites in Transnistria in an attempt to frame Ukrainian forces, and Ukraine‘s Operational Command South stated the Moldovan-Ukrainian border is well protected by Ukrainian counter-sabotage groups.[24] Transnistrian sources falsely claimed that Ukrainian drones dropped four explosives on an airfield in Varancau, on the border of Transnistria and Ukraine, the night of May 6-7.[25]

Neither Russian nor Ukrainian forces made any confirmed advances on the Southern Axis in the last 24 hours, though sporadic fighting continued along the line of contact. Ukrainian sources reported continued fighting toward Mykolaiv, Kryvyi Rih, and Zaporizhia without any significant changes, as well as continued Russian shelling.[26]