Russian forces have made steady, incremental gains in heavy fighting in eastern Ukraine in the past several days, though Ukrainian defenses remain effective overall. Deputy Ukrainian Defense Minister Hanna Malyar stated that the fighting is currently at its "maximum intensity” compared to previous Russian assaults and will likely continue to escalate.[1] Spokesperson for the Ukrainian Defense Ministry Oleksandr Motuzyanyk characterized Russian gains as “temporary success” and stated that Ukrainian forces are using a maneuver defense to put pressure on Russian advances in key areas.[2] Russian forces have now taken control of over 95% of Luhansk Oblast and will likely continue efforts to complete the capture of Severodonetsk in the coming days.[3] Russian forces have made several gains in the past week, but their offensive operations remain slow. Russian forces are heavily degraded and will struggle to replace further losses. 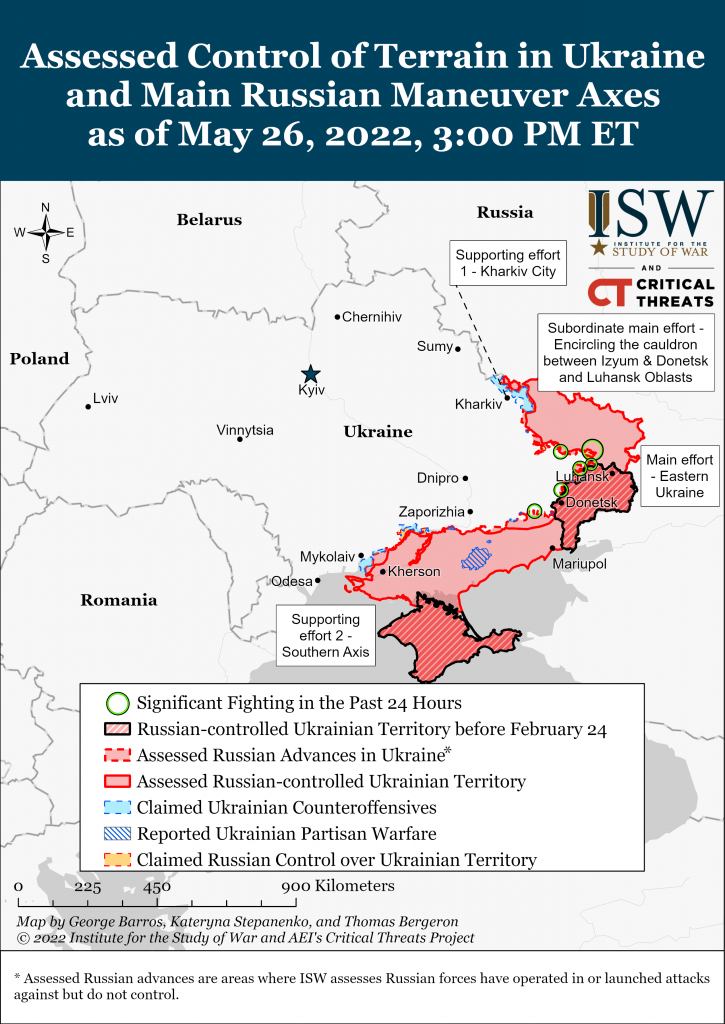 ISW has updated its assessment of the four primary efforts Russian forces are engaged in at this time. We have stopped coverage of Mariupol as a separate effort since the city’s fall. We have added a new section on activities in Russian-occupied areas:

Russian forces continued efforts to encircle Severodonetsk on May 26. Russian forces reportedly attempted to take control of Ustynivka, about 15 km southeast of Severodonetsk.[7] Russian sources additionally reported that Russian troops are approaching Severodonetsk from Vojevodivka and Schedryshcheve (northeast of Severodonetsk) and that the northeast portion of the city is under Russian control.[8] A Russian military reporter claimed that as many as 10,000 people may be trapped in the Severodonetsk-Lysychansk cauldron.[9] Ukrainian troops have reportedly fortified their positions in the Zolote-Orikhiv area, where Russian troops have encircled them.[10]

Russian forces continued persistent advances in Donetsk Oblast south and west of Popasna on May 26. Troops from the Donetsk and Luhansk People’s Republics (DNR and LNR) claimed to have taken full control of Svitlodarsk and Midna Ruda, settlements off the M03 highway and within 30 km southeast of Bakhmut.[11] Russian troops are reportedly fighting around Komyshuvakha, Nirkove, Berestove, Belohorivka, Pokrovske, Klynove, Lypove, and Nahirne and using these areas to advance toward Bakhmut.[12] Russian forces conducted unsuccessful operations around Donetsk City in the vicinity of Avdiivka and continued to shell north and northwest of Avdiivka.[13] 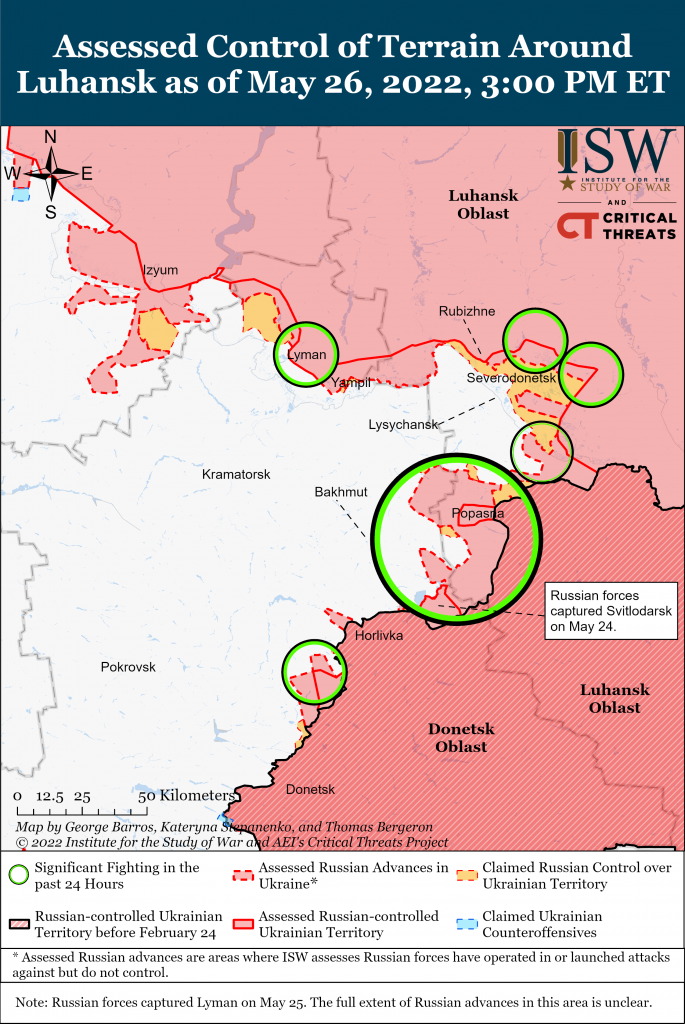 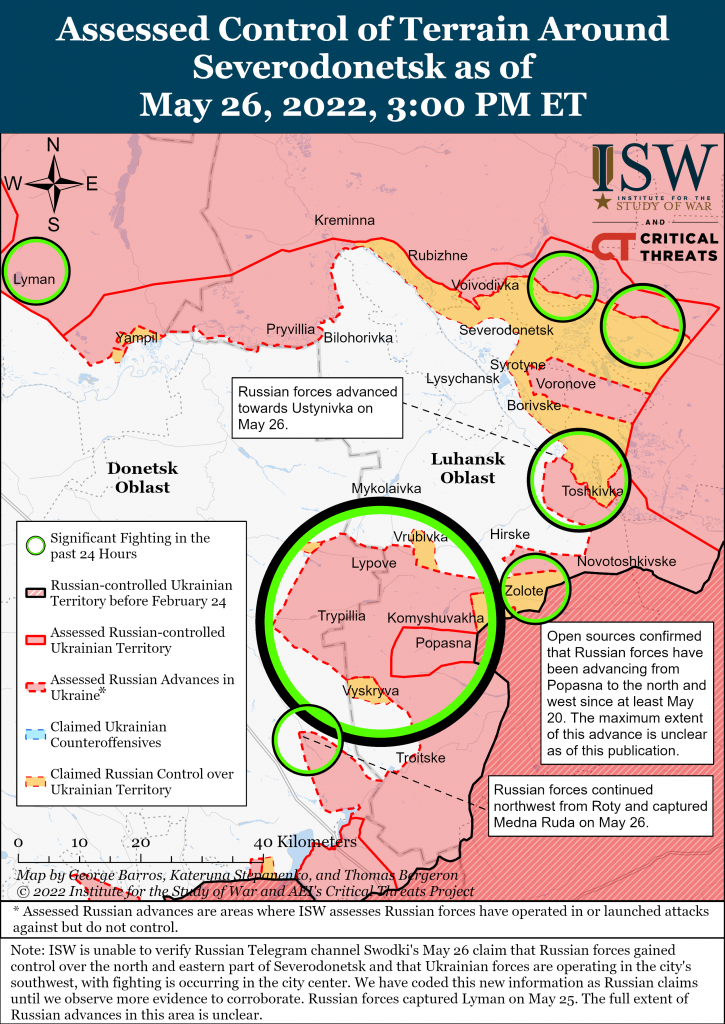 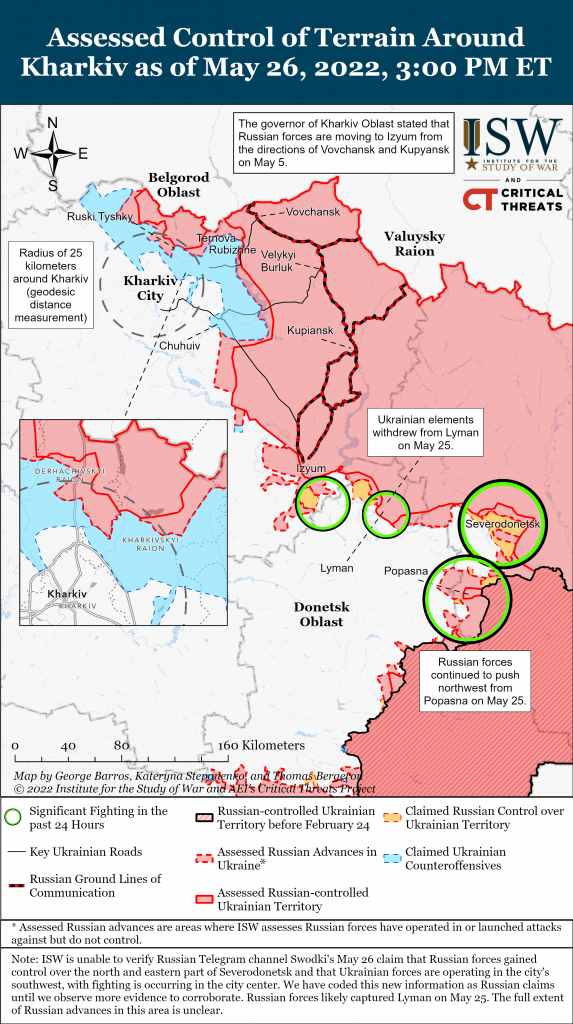 Russian forces focused on improving their tactical positions and strengthening defensive lines on the southern axis on May 26.[16] Ukraine’s Southern Operational Command stated that Russian forces are creating a “third line of defense” in occupied Kherson Oblast, indicating they are preparing for protracted conflict in this area and digging in to repel likely anticipated Ukrainian counteroffensives.[17] This assessment is consistent with statements made by the Ukrainian Main Intelligence Directorate (GUR) that Russian forces are strengthening their defenses in occupied areas in order to hold those territories over the long term.[18]

Russian forces are reportedly attempting to advance to the Mykolaiv-Kherson administrative border and conducted unsuccessful assault operations around Tavriyske and Mykolaivka on May 26.[19] Russian forces heavily shelled areas of Zaporizhia Oblast and strengthened their grouping of forces around Vasylivka and Polohy to renew offensives in the directions of Kamyanske, Orikhiv, and Huliapole.[20] The Ukrainian General Staff noted that the Russian grouping in Zaporizhia, specifically around Melitopol, has been reinforced by a battalion using outdated T-62 tanks, confirming earlier Ukrainian reports that Russian forces are cobbling together battalions with obsolete T-62 tanks to compensate for equipment losses.[21] 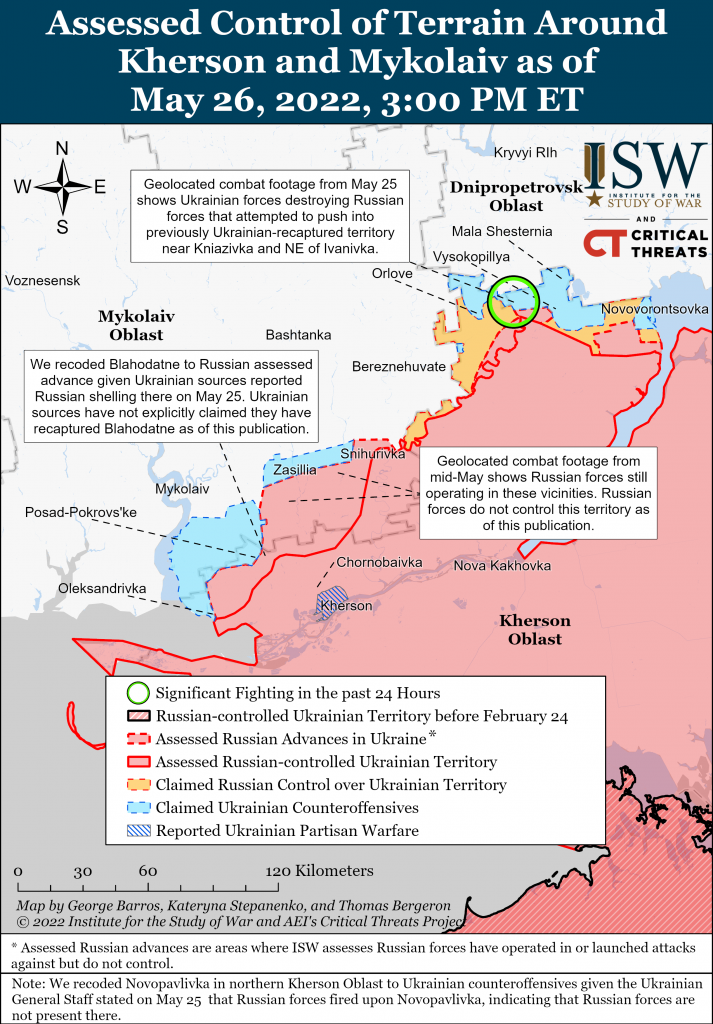 Russian occupation authorities continued actions to strengthen their administrative control of occupied areas on May 26. Russia’s Ministry of Emergency Situations deployed three broadcast trucks to Mariupol to transmit state-controlled programming to residents of the city.[22] Advisor to the Mayor of Mariupol Petro Andryushchenko claimed that occupation elements are taking control of schools in Mariupol and have extended the school year through September in order to ensure children spend the summer learning according to strictly Russian curricula.[23] Russian-backed occupation authorities in Kherson stated that Russian mobile phone operators will be available in occupied areas and that pensions will be paid in rubles starting in June.[24] Residents of Kherson and Zaporizhia will additionally be able to obtain Russian passports at newly established passport points in accordance with Russian President Vladimir Putin’s May 25 decree simplifying the process to obtain Russian passports in these occupied areas.[25]