The Russian military has continued its unsuccessful attempts to encircle Kyiv and capture Kharkiv. The Russians continued to attack piecemeal, committing a few battalion tactical groups at a time rather than concentrating overwhelming force to achieve decisive effects. Russian commanders appear to prefer opening up new lines of advance for regiment-sized operations but have been unable to achieve meaningful synergies between efforts along different axes toward the same objectives. They have also continued conducting operations in southern Ukraine along three diverging axes rather than concentrating on one or attempting mutually supporting efforts. These failures of basic operational art—long a strong suit of the Soviet military and heavily studied at Russian military academies—remain inexplicable as does the Russian military’s failure to gain air superiority or at least to ground the Ukrainian Air Force. The Russian conventional military continues to underperform badly, although it may still wear down and defeat the conventional Ukrainian military by sheer force of numbers and brutality.  Initial indications that Russia is mobilizing reinforcements from as far away as the Pacific Ocean are concerning in this respect. Those indications also suggest, however, that the Russian General Staff has concluded that the forces it initially concentrated for the invasion of Ukraine will be insufficient to achieve Moscow’s military objectives.

Operations to envelop Kyiv remain Russia’s main effort. Russian troops are also continuing three supporting efforts, one to seize Kharkiv, one to take Mariupol and secure the “land bridge” connecting Rostov-on-Don to Crimea, and one to secure Kherson and set conditions for a drive west toward Mykolayiv and Odesa.

The Russian attack on Kyiv likely consists of a main effort aimed at enveloping and ultimately encircling the city from the west and a supporting effort along the axes from Chernihiv and Sumy to encircle it from the east.

Russian forces in the south resumed offensive operations toward Mykolayiv on March 3 after securing Kherson on March 2, but do not appear to pose an imminent danger to Odesa. Russian forces likely seek to force Mariupol to capitulate by destroying critical civilian infrastructure and killing civilians to create a humanitarian catastrophe—an approach Russian forces have repeatedly taken in Syria.[1] 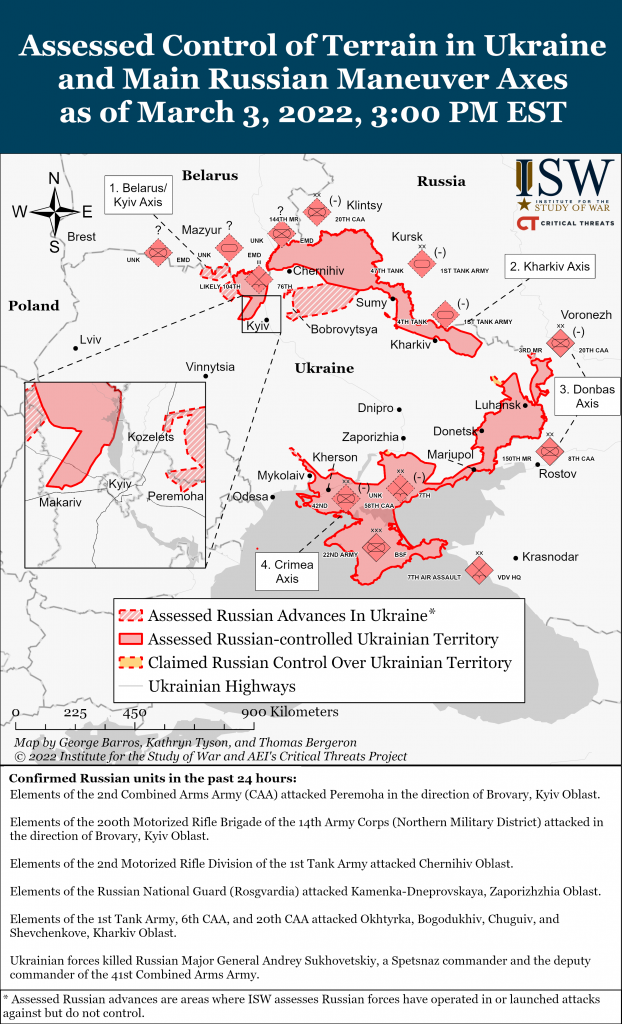 Russia has not achieved air superiority over Ukraine as of March 3. The Ukrainian Air Force continues operating a week after the invasion began, with the Ukrainian General Staff reporting that Ukrainian Su-24s and Su-25s conducted airstrikes in Kyiv, Sumy, Chernihiv, and Kharkiv oblasts in the last 24 hours.[4]  Ukrainian air defenses reportedly intercepted a Russian missile targeting Kyiv’s main railway station, which remains packed with refugees, the night of March 2.[5]  Russian failures to secure air superiority likely reduce the effectiveness and extent of Russian air and missile attacks, increase the risk to Russian airborne and air assault operations, and force Russian ground combat units to face periodic air attack, likely degrading their operations to some extent. Russia’s failures in the air superiority fight are very surprising; ISW cannot offer any explanations for them at this time.

Russian efforts within and in the immediate vicinity of Kyiv have reportedly relied on saboteurs and reconnaissance elements, often out of uniform or wearing Ukrainian uniforms, rather than on attacks by regular combat forces. ISW cannot confirm any new developments in central Kyiv on March 3. Ukraine’s Main Military Intelligence Directorate (GUR) warned Ukrainians that Russian forces may employ a deepfake video depicting Ukrainian President Volodymyr Zelensky’s surrender to Russia on March 3.[6]  The GUR warned that Russia could use such a deepfake video to demoralize the Ukrainian population and convince Ukrainians to surrender.

Russia Likely Mobilizing Reinforcements from the Far East and Donbas

Russian social media users observed new trains loaded with combat vehicles likely of the Eastern Military District (EMD) in Khabarovsk, far eastern Russia.[7] These elements will likely deploy to Belarus to reinforce the EMD’s existing axis against Kyiv from the northwest. Ukraine’s commander in chief claimed on March 3 that Russia mobilized residents of the Donetsk and Luhansk People’s Republics (DNR and LNR) and is transporting them to Belgorod via mainland Russia to support assaults on Kyiv.[8]  Ukraine’s commander in chief also claimed that Russia is transporting DNR and LNR citizens via Krasnodar to Crimea to support a Russian assault on Odesa.[9]

Supporting Effort #1—Kharkiv: Russian forces will likely attempt to encircle Kharkiv in the next 24-48 hours. The Ukrainian General Staff reported six Russian BTGs around Kharkiv “moved to the defense” on March 3, but additionally assessed that three BTGs will “probably make an attempt to surround Kharkiv from the south.”[27] Russian forces likely seek to encircle and bypass Kharkiv before bombarding it to force a capitulation—as Russian forces are currently similarly attempting against Mariupol. Russian forces continued to deliberately target civilian infrastructure in Kharkiv with multiple-launch-rocket systems (MLRS), tube artillery, cluster munitions, and Kalibr cruise missiles on March 3.[28] The Russian air, artillery, and missile barrage may be intended to generate panic and reduce the morale of Ukrainian defenders in Kharkiv and elsewhere. It is not likely to achieve that effect. It is too early to evaluate the likelihood that a renewed Russian ground offensive will succeed in taking the city.

The Ukrainian General Staff reported on March 3 that two Russian BTGs will “probably try to advance in the direction of Izum [south of Kharkiv]” from northern Luhansk Oblast with the eventual objective of taking Dnipro and Zaporizhya from the north.[29] If confirmed, this would be a wide Russian enveloping maneuver, likely seeking to cut off all Ukrainian forces in Donetsk and Luhansk Oblasts. Two BTGs would be unable to complete this encirclement, let alone attack two large cities.

Supporting Effort #2—Mariupol: Russian forces fully encircled Mariupol as of March 2 and are conducting a deliberate campaign to destroy critical civilian infrastructure and residential areas in a likely attempt to force the city to surrender. The Ukrainian General Staff reported that Mariupol is “stable” as of noon local time on March 3, though LNR forces (likely supported by Russia’s 8th Combined Arms Army) continued attacks on the city.[30] ISW cannot confirm the status of Ukrainian defenders or the extent of Russian attacks on the city on March 3.

The LNR announced that it captured the seven towns of Novoaidar, Krasnorichens'ke, Epifanovka, Stepnoy Yar, Havrylivka, Starobilsk, and Andriivka in Luhansk Oblast on March 3.[31] ISW assesses that Russian proxy forces control Havrylivka, Starobilsk, and Krasnorichens'ke, but cannot confirm Russian proxy control over Novoaidar, Krasnorichens'ke, Epifanovka, and Andriivka at this time.[32] Ukraine’s General Staff acknowledged that that LNR forces continued offensive operations near Novoaidar at 6:00 am local time on March 3.[33]

The Ukrainian General Staff additionally published photos on March 2 of a Russian plan Ukrainian forces captured from a battalion of the Black Sea Fleet’s 810th Naval Infantry Brigade.[34] The plans stated that Putin authorized a Russian invasion of Ukraine on January 18, planned at that time to run from February 20 to March 6. The BTG reportedly planned to conduct an amphibious landing at Stepanovka, on the Sea of Azov, before operating with elements of the 58th CAA and 117th Naval Infantry Regiment to surround and seize Melitopol. No such landing occurred.

Supporting Effort #3—Kherson and west: Russian forces secured a negotiated surrender of Kherson on March 2 and continued advances toward Mykolayiv on March 3, including a failed airborne landing. The mayor of Kherson confirmed that no Ukrainian forces remain in the city and that "for the Ukrainian flag to continue flying over us" he negotiated several conditions with Russian forces, including a strict curfew from 8 p.m. to 6 a.m. and forbidding civilians from walking in groups larger than two or confronting Russian forces.[35] Russian forces deployed additional reserves and resumed offensive operations toward Mykolayiv on March 3.[36] Ukrainian forces additionally defeated a heliborne assault by Russian VDV (airborne) or special forces on Balovne, an airport near Mykolayiv.[37]

The Ukrainian General Staff reported that Russian forces committed reserve elements of the 205th Motor Rifle Brigade of the 49th Combined Arms Army towards both Mariupol and Zaporizhya on March 3.[38] Russian forces will likely struggle to fully resource three simultaneous lines of effort from Crimea – Mikoayiv, Zaporizhya, and Mariupol. Russian forces have not made territorial advances towardsZaporizhya since March 1.