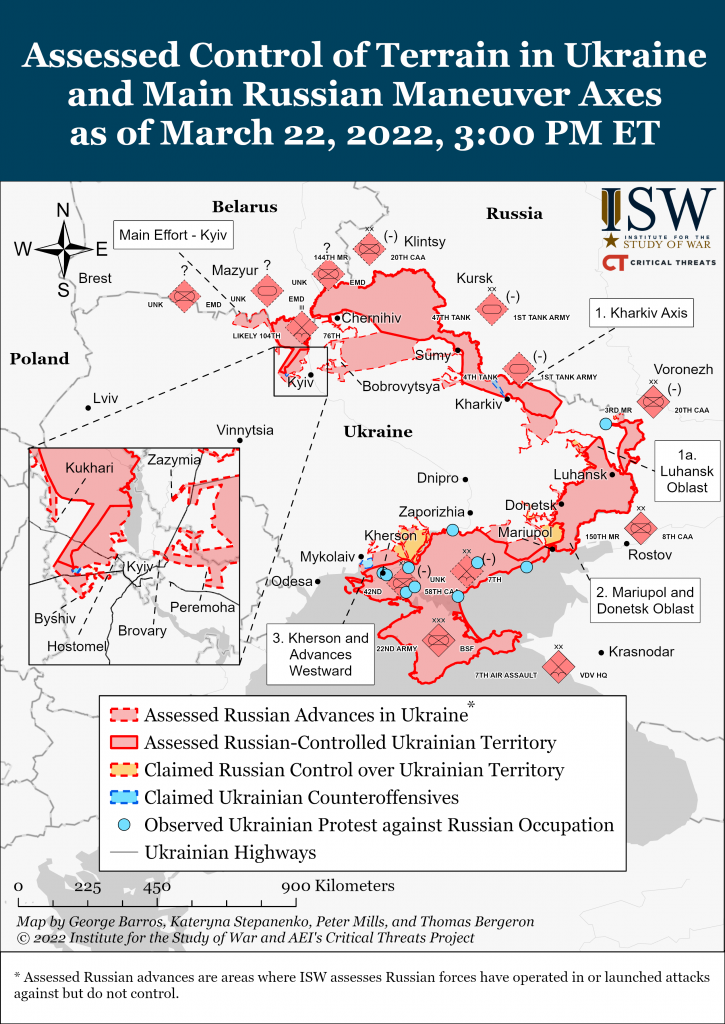 Russian forces are likely moving to a phase of protracted bombardment of Ukrainian cities due to the failure of Russia’s initial campaign to encircle and seize Kyiv and other major cities. Russian forces continue to conduct air and missile strikes against both civilian and military targets across unoccupied Ukraine in the absence of offensive ground operations.[1] The Ukrainian General Staff reported at 6pm local time on March 22 that Russian aircraft conducted over 80 sorties in the past 24 hours.[2] Pentagon Press Secretary John Kirby additionally stated on March 21 that Russian forces have increased their long-range fires against Ukrainian cities in an attempt to force them to surrender.[3] Russian forces are unlikely to force Ukrainian cities to surrender with bombardment alone.

Russian forces face continuing logistics and reinforcement issues. The Ukrainian General Staff specified for the first time on March 22 that Russian forces – particularly highlighting the 7th Air Assault Division, operating around Kherson – are suffering casualties due to a poor medical supply system and lack of medicine.[4] The Ukrainian General Staff additionally stated Russian forces face growing supply issues, claiming some unspecified units have stockpiles of food and ammunition for no more than three days.[5] Russian forces continue to cobble together ad hoc units from the servicemen of several units to replace combat losses.[6] Russia is expanding its methods to generate replacements, including expanding forcible conscription in Donetsk Oblast and forcing Russians with large amounts of debt to sign military contracts in return for exemption from credit obligations.[7] The Ukrainian General Staff reported on March 22 that Russia is increasingly carrying out propaganda aimed at Belarusian servicemen to incentivize Belarusian participation in the war, although ISW cannot independently verify this claim and an unnamed US senior defense official stated on March 21 that the US has seen no indication that Belarus is preparing to enter the war.[8]

Russian forces are unlikely to successfully resolve their command and control issues in the near term. A Senior US Defense Official stated on March 21 that Russian forces are increasingly using unsecured communications due to lacking sufficient capacity on secured networks.[9] CNN additionally quoted multiple sources on March 21 that the US has been unable to determine if Russia has appointed an overall commander for the invasion of Ukraine.[10] These sources stated Russian units from different Military Districts appear to be competing for resources and are not coordinating their operations.

Russian forces conducted an unsuccessful attack towards Brovary late on March 21 but did not conduct any major offensive operations northeast of Kyiv on March 22.[15] The Ukrainian General Staff reported on March 22 that Russian forces deployed an additional BTG of the 90th Tank Division and other unspecified Central Military District (CMD) units to the northeastern axis of advance.[16] Russian forces did not conduct any assaults on Chernihiv or Sumy in the past 24 hours and continued to shell both cities.[17] 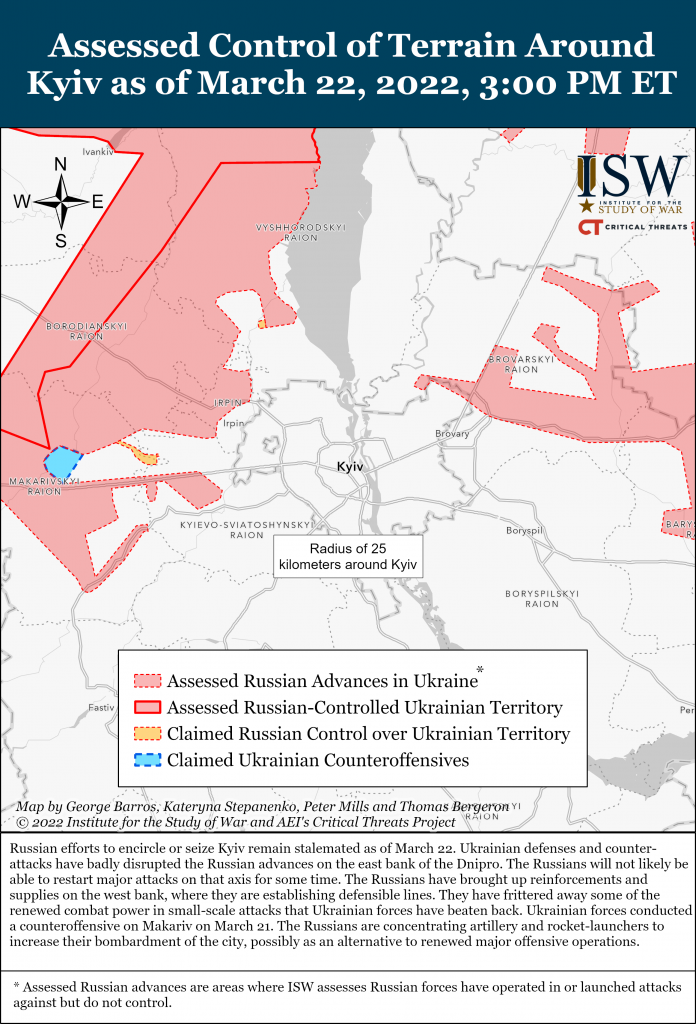 Russian forces did not conduct any offensive operations around Kharkiv and paused attacks to take the city of Izyum, southeast of Kharkiv, on March 22.[18] The Ukrainian General Staff reported Russia is deploying additional Naval Infantry from the Baltic and Northern fleets to Kharkiv and Izyum, in addition to attempting to restore the combat potential of previously deployed units.[19] The General Staff additionally reported Russian engineering units are attempting to repair a railway connection from Valuyki (Belgorod Oblast, in Russia) to Kupyansk (Kharkiv Oblast) to support logistics efforts around Kharkiv.[20]

Russian forces conducted several unsuccessful attacks in Donetsk and Luhansk Oblasts in the last 24 hours. The Ukrainian General Staff reported at noon local time on March 22 that Russia and proxy forces concentrated their efforts on capturing Rubizhne, Severodonetsk, Popasna, and Vugledar but were unsuccessful.[21] The Ukrainian General Staff additionally stated Ukrainian forces inflicted heavy losses on a Russian attack on Marinka as of noon local time on March 22.[22]

Russian forces continued to assault Mariupol and shell residential areas of the city in the past 24 hours.[23] Russian forces are continuing to reinforce artillery positions northeast of the city.[24] Chechen leader Ramzan Kadyrov posted an update on claimed Chechen operations in Mariupol late on March 21.[25] Kadyrov claimed the head of the Chechen branch of Rosgvardia, Adam Delimkhanov, is personally leading Chechen fighters taking the city ”quarter by quarter,” including the Azovstal factory in eastern Mariupol, which Russian forces claimed to have captured on March 10.[26] Kadyrov stated Chechen fighters provide reliable cover for their ”brothers in arms” in the conventional Russian military. Social media users have independently confirmed the presence of Chechen units around Mariupol, but have not confirmed the exact role Rosgvardia units are playing in ongoing urban fighting. 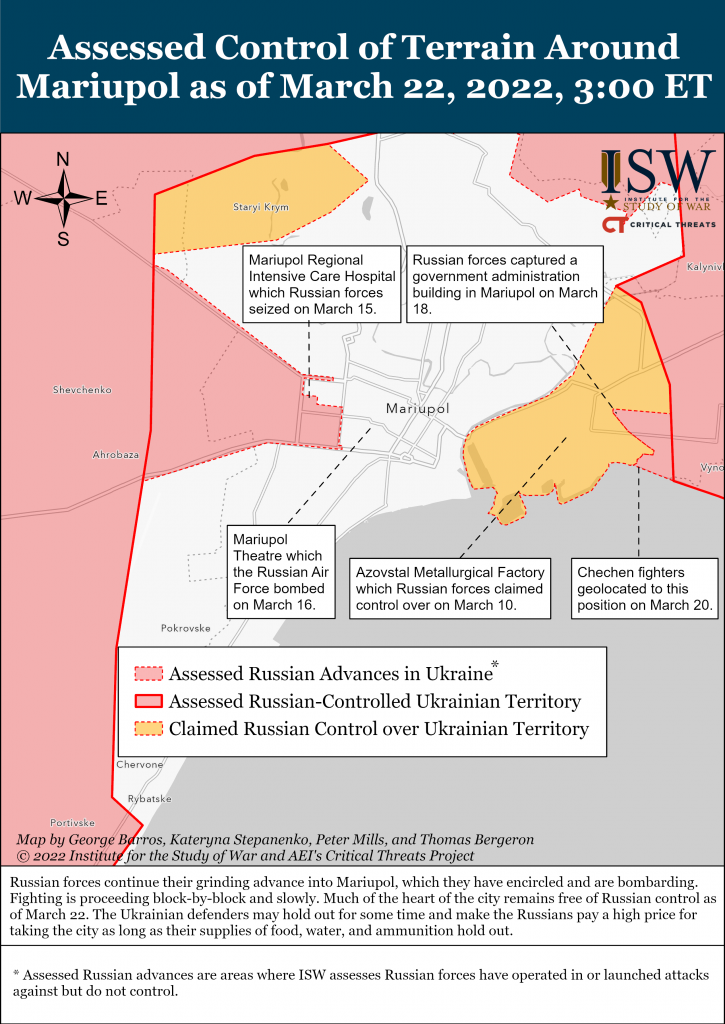 Ukrainian forces additionally published a map on March 22 reportedly captured from Russian forces in Kherson Oblast on March 10.[29] The map reports Russia had about 10 BTGs from the 49th Combined Arms Army and 7th Airborne (VDV) Division operation on the Kherson axis in mid-March, in addition to supporting units from the 22nd Army Corps. Russian forces additionally reportedly had most of their command and control assets in the region stationed at the Kherson airport, which was struck by Ukrainian aircraft on March 15.