Russian forces made small territorial gains in Luhansk Oblast on March 14 but did not conduct any major attacks toward Kyiv or in northeastern Ukraine. Russian forces continue to assemble reinforcements and attempt to improve logistical support in both the Kyiv and southern operational directions. Ongoing Russian efforts to replace combat losses with both Russian replacements and non-Russian sources, including Syrian fighters and the Wagner Group, are unlikely to enable Russia to resume major offensive operations within the coming week. 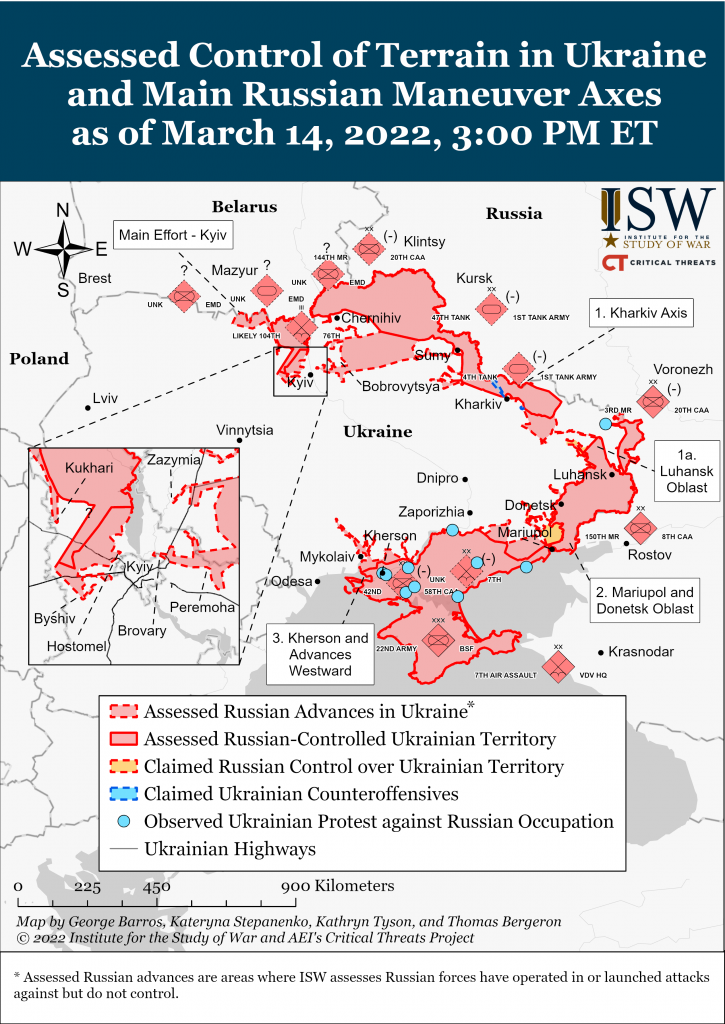 Russia continues to face difficulties replacing combat losses and increasingly seeks to leverage irregular forces including Russian PMCs and Syrian fighters. The Ukrainian General Staff claimed that Russian servicemen are increasingly refusing to travel to Ukraine despite promises of veteran status and higher salaries.[1] The Ukrainian General Staff reported on March 14 that Russia has recruited over a thousand Syrian fighters in “recent days” and that approximately 400 Syrian fighters have arrived in Russia.[2] Russia reportedly established training camps near Rostov (in Russia, directly east of Donbas) and Gomel (in Belarus, north of Kyiv). Senior Lieutenant Sergey Zavadsky of the Russian PMC Wagner Group was confirmed killed in Ukraine on March 13, the first verified Russian PMC casualty since the start of the invasion on February 24.[3]

Russian and Chinese officials both denied US intelligence reports that Russia sought military aid from China. Both claimed that Russia does not need additional military support. Russian and Chinese officials and state media denied US media reports on March 13 that Russia requested military aid from China, calling these reports disinformation.[7] Kremlin spokesperson Dmitry Peskov pushed back on the reports and denied that Russia would need any external aid, claiming that "Russia has an independent potential to continue the operation" and that Russian operations “will be completed on time and in full.”[8] Chinese state media similarly stated that Russia does not need Chinese help in its “limited-scale” war in Ukraine but emphasized that the United States cannot obligate China to promise not to export arms to Russia.[9] Russia and China likely have discussed possible Chinese military aid to Russia, but both seek to frame Russia’s invasion of Ukraine as a limited operation and to avoid acknowledging growing Russian supply issues.

Russian forces launched several unsuccessful assaults against Irpin and Bucha on March 13-14, attempting to cross the Irpin River.[12] Russian VDV (Airborne) forces supported by engineers unsuccessfully attempted to establish a pontoon bridge over the Irpin river.[13] The Ukrainian General Staff reported that Russian forces primarily continued to restore combat capability, regroup their troops, and improve logistics and have not resumed large-scale offensive operations, despite the limited attacks in Irpin and Bucha.[14] Russian forces have not conducted any major attacks on northwestern Kyiv since March 9.

Putin-appointed strongman leader of the Chechen Republic Ramzan Kadyrov claimed on Telegram to have traveled to the northwestern Kyiv suburb of Hostomel to meet with Chechen forces on March 13.[15] ISW cannot verify Kadyrov’s video and claimed travel to Ukraine, though Chechen forces are confirmed to be participating in Russian efforts to encircle Kyiv from the west. Kadyrov likely seeks to increase the morale of Chechen troops that have reportedly suffered heavy losses in Ukraine, regardless of the veracity of his video.

Russian forces did not conduct any offensive operations toward the eastern Kyiv suburb of Brovary or against Chernihiv in the last 24 hours.[16] The Ukrainian General Staff reported Russian forces northeast of Kyiv “moved to the defense” in the last 24 hours and focused on replenishing supplies and conducting reconnaissance.[17] Russian forces likely intend to reinforce their exposed line of communication in northeastern Ukraine against counterattacks prior to resuming offensive operations toward northeastern Kyiv.

Ukrainian forces repelled Russian forces around Izyum (southeast of Kharkiv) late on March 13, repelling Russian attacks near several villages, including Topolske, Shpakivka, and Donetske.[18] The Ukrainian General Staff reported that Russian forces conducted several attacks to reclaim the territory throughout March 14, with fighting ongoing as of 6:00 pm local time on March 14.[19] Russian forces did not conduct any offensive operations in or around Kharkiv in the past 24 hours and continued to shell the city.[20] The continued ability of Ukrainian forces to carry out successful local counterattacks indicates that Russian forces are unlikely to successfully bypass Kharkiv from the southeast to advance toward Dnipro and Zaporizhia in the near term.

Russian and proxy forces continue to achieve slow but steady territorial gains in Donetsk Oblast after initial failures in the first week of the Russian invasion. The Russian Ministry of Defense claimed Russian forces have advanced 15-17km from the pre-invasion line of contact in Donetsk Oblast as of March 14.[26] The Donetsk People’s Republic (DNR) additionally announced a list of 90 settlements it claims to have captured as of March 14.[27] Russian and proxy forces likely seek to advance toward Zaporizhya and mitigate the possibility of any Ukrainian attempts to relieve Mariupol or attempts by its defenders to break out.

The Ukrainian General Staff reported that Ukrainian forces halted resumed Russian attacks from Kherson toward Mykolayiv and Kryvyi Rih on March 14.[28] Russian forces have not abandoned their effort to encircle Mykolayiv.[29] The Ukrainian Border Guard found three dead Russian soldiers in Mykolayiv while patrolling the area of a possible Russian airborne landing on March 14 and stated they believe these three servicemen were left behind by their own detachment.[30] Russian forces may intend to advance toward Kryvyi Rih to encircle Zaporizhya but are unlikely to have the forces necessary to do so while Russian forces in the south remain committed to the encirclement of Mariupol.