Russian forces again conducted few ground offensives on March 13, only securing new terrain in Donetsk and Luhansk Oblasts. The Ukrainian General Staff reported that Russian forces predominantly took measures to restore combat readiness and regrouped combat units as of noon local time on March 13.[1] Russian forces continue to assemble reinforcements and attempt to improve logistical support in both the Kyiv and southern operational directions. Russian forces may intend to resume larger-scale attacks on both axes of advance in the coming week, but will likely take longer to (or may never) cohere the combat power necessary to complete the encirclement of Kyiv. 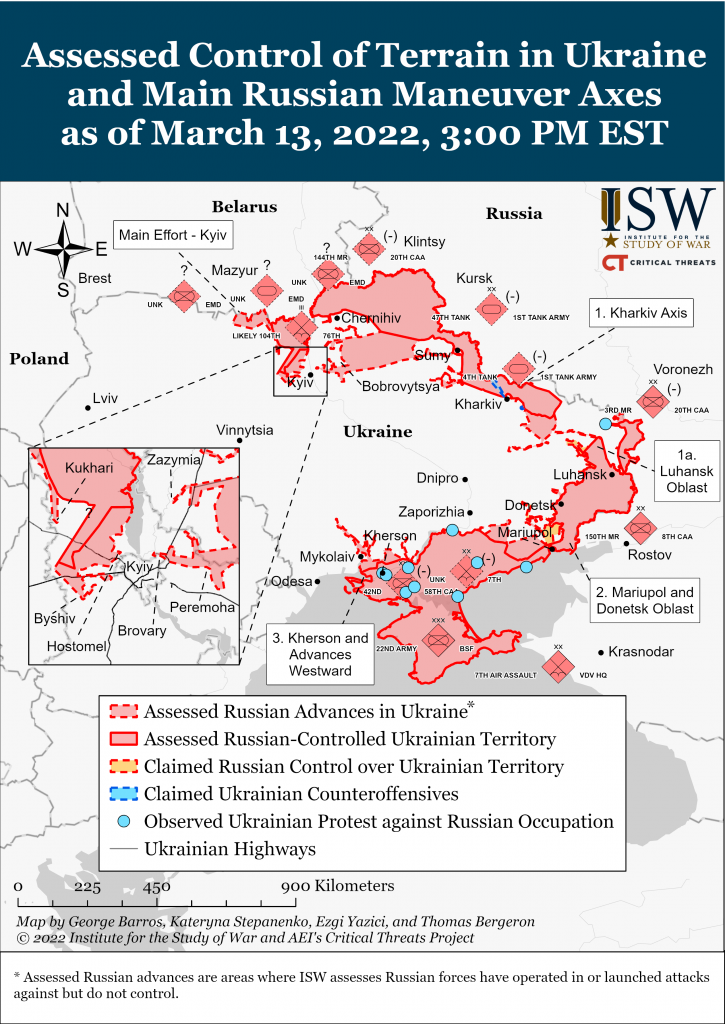 Russia is increasingly pulling forces from its international deployments to reinforce operations in Ukraine, though these deployments are unlikely to shift the balance of forces in the coming week. The Ukrainian General Staff reported on March 13 that 800 personnel from Russia’s 102nd Base in Armenia deployed to an unknown location in Russia on March 9-10 in preparation to deploy to Ukraine.[2] They also reported that Russia is recalling elements of its peacekeeping deployment in Nagorno-Karabakh to replenish losses in Ukraine.[3] Russia will likely draw further forces from its international deployments in Armenia, Tajikistan, and Syria to replace losses in Ukraine. The Ukrainian General Staff separately reported that Russia plans to deploy 1,500 troops from Russia’s 40th Naval Infantry Brigade (of the Pacific Fleet) to Belarus via rail at an unspecified time.[4]

Ukrainian intelligence provided further details on Russia’s initiative to deploy existing pro-Assad units to Ukraine and recruit additional Syrian and Libyan mercenaries on March 13. Ukraine’s Military Intelligence Directorate (GUR) reported that Russia is recruiting mercenaries from Syria and Libya and will pay them around $300-$600 monthly.[5] Russia reportedly opened 14 recruitment centers in Syria and will transport mercenaries to the Chkalovsky airbase in Moscow Oblast after they receive training. The GUR reported that Russia has already gathered “thousands” of Syrian troops, mainly those specialized in heavy artillery and sniper weapons, from the National Defense Forces and 5th Corps—two Russian-backed pro-Assad units. Russia can likely redeploy its established Syrian proxy forces in the National Defense Militia and 5th Corps on relatively short notice, dependent on its airlift capacity. However, even hurriedly trained Syrian and Libyan mercenaries will likely take weeks or months to deploy to Ukraine and will likely be of lower quality than the already poor Russian forces in Ukraine. Russia is unlikely to successfully mobilize the reinforcements and replacements necessary to favorably change the balance of forces around Kyiv in the next week but may successfully generate a longer-term pool of low-quality replacements.

The Kremlin may be seeking to take direct control of Belarusian units to deploy them in Ukraine but faces Belarusian resistance. Independent Ukrainian media reported on March 13 that Russian commanders are taking control of Belarusian units to suppress Belarusian soldiers’ efforts to resist going to war in Ukraine and reported  “riots” in some Brest-based units.[6] ISW cannot independently confirm these reports through other sources at this time; if confirmed, the reports support ISW’s previous assessment that the Kremlin seeks to bring Belarus into the war but faces resistance from both Belarusian soldiers and Belarusian President Lukashenko. The Ukrainian General Staff additionally reported that Russian forces established a base for repairing and restoring military equipment in Kulichikha, Belarus, (17 km from the border) on March 13.[7]

Russian ballistic missiles struck the Yavoriv military training center, northwest of Lviv, and less than 10 kilometers from the Polish border, and killed at least 35 Ukrainian personnel on March 13.[8] The United States and NATO conduct the majority of their joint training with Ukrainian forces at Yavoriv, and Ukraine is likely using Yavoriv as a primary staging ground for military aid deliveries through Poland. The Kremlin announced on March 12 that it will treat Western aid deliveries to Ukraine as legitimate military targets and will likely conduct further strikes on western Ukraine in the coming week to interdict Ukrainian supplies.[9] Russian forces are increasingly using unmanned aerial vehicles (UAVs) in Ukraine, including an armed Forpost-R UCAV on March 13.[10] The Ukrainian air force and air defenses remain active, however, and claimed to shoot down two Ka-52s helicopters, one Su-34 fighter bomber, an unidentified Sukhoi jet, and two drones on March 13.[11]

Russian forces did not conduct offensive operations northwest of Kyiv in the past 24 hours for the third day in a row. The Ukrainian General Staff reported that Russian forces prioritized reconnoitering Ukrainian positions in preparation for resuming attacks on Kyiv.

The Ukrainian General Staff reported that Russian forces northeast of Kyiv “moved to the defense” in the last 24 hours and focused on replenishing supplies and conducting reconnaissance.[15] The General Staff reported that Russia deployed forward additional units from the Central Military District. Russian forces likely intend to reinforce their exposed line of communication in northeastern Ukraine against counterattacks prior to resuming offensive operations toward northeastern Kyiv.

Russian forces launched an unsuccessful attack on Izyum, southeast of Kharkiv, on March 13.[16] Russian forces likely seek to bypass Kharkiv from the southeast and advance towards Dnipro and Zaporizhia but are unlikely to make substantial advances without committing further combat power. The Ukrainian General Staff additionally reported at noon local time on March 13 that a BTG of the 6th Combined Arms Army withdrew to Belgorod to restore combat capability after fighting in the Kharkiv city area.[17]

Russian forces continued sporadic assaults on Mariupol on March 13. Ukrainian forces claimed to kill 15 Russian servicemen and stated Ukrainian forces remain in high spirits despite poor communications.[24] Russian forces are unlikely to seize Mariupol through a direct assault without a greater concentration of forces (which they remain unlikely to have the ability to assemble). Russia will likely continue to shell the city and maintain gradual ground assaults to force the city to capitulate.

Ukrainian protests in occupied Kherson are likely expanding. The Ukrainian General Staff reported Russian troops fired in response to a large protest (reported by independent Ukrainian media to be in the low thousands) in Kherson on March 13 but did not report any casualties.[27] Ukrainian residents also protested in occupied Berdyansk and Melitopol on March 13.[28] Kherson Mayor Igor Kolikhayev announced that he rejected a Russian attempt to force Kherson residents to pass a referendum announcing a ”Kherson People’s Republic.”[29] If confirmed, this Russian effort may indicate a possible Russian approach to governing occupied Ukraine—dividing it up into several separate proxy ”People’s Republics” modeled on the Donetsk and Luhansk People’s Republics.