Ukrainian forces reportedly killed Russian Major General Roman Kutuzov on June 5. Russian Telegram channels reported that Kutuzov was killed near Mykolaivka, Luhansk Oblast (near Popasna) on June 5.[3] Kutuzov likely commanded the Donetsk People’s Republic’s 1st Army Corps at the time of his death, though ISW cannot confirm his exact position.[4] Some sources reported that Kutuzov commanded the 5th Combined Arms Army (CAA) at the time of his death, but we assess this is likely incorrect—Kutuzov served as acting commander of the 5th CAA from 2017 to 2019, and Major General Alexei Vladimirovich Podilov currently commands the 5th CAA.[5] High-level Russian commanders have taken remarkably high losses during combat in Ukraine, and will likely continue to do so as the Russian command continues to deploy military leadership directly to the frontline. Kutuzov’s death has not yet been confirmed but would be at least the seventh death of a general in Ukraine since the beginning of the war.[6]

Russian forces conducted their first missile strike against Kyiv in over a month on June 5. Advisor to the Ukrainian Ministry of Defense Vadym Denysenko stated that Russian forces fired five X-22 cruise missiles from a Tu-95 aircraft at Kyiv from the direction of the Caspian Sea that hit the Darnytsia Rail Car Repair Plant on the outskirts of Kyiv.[7] The Russian Ministry of Defense claimed that this strike targeted T-72 tanks supplied to Ukraine by other Eastern European countries, but images of the target area confirm that the missiles hit the Darnytsia plant.[8] It is unclear if Russian forces intended to strike foreign-provided Ukrainian tanks and missed, or if the Kremlin is attempting to obfuscate its intended target. This attack on Kyiv likely indicates that Russian forces are continuing to target Ukrainian infrastructure in non-critical areas of Ukraine in order to disrupt Ukrainian logistics as Russian forces take considerable losses in Donbas.

Russian military bloggers continued to reckon with overarching struggles in Russian force generation on June 5. Russian milblogger Alexander Khodakovsky accused “screamers in the guise of patriots” of hypocritically calling for general mobilization while at the same time discrediting the Russian military leadership and driving away those who would voluntarily take up arms for Russia.[9] Khodakovsky blamed the pervasive public discourse on general mobilization for making people overthink and subsequently become less willing to enter military service, thereby forcing Russian military command closer to actually needing to announce general mobilization. Khodakovsky suggested that this discourse is setting Russia up for a long war in Ukraine and that Russian authorities have been positioned to take the blame for losses. Russian war journalist Alexander Sladkov claimed that the Russian grouping in Ukraine is an ”exclusively professional army” not staffed by conscripts, while simultaneously calling for the removal of health requirements for rear and combat specialties in order to mobilize those who should be medically disqualified.[10] These and other comments by Russian military specialists indicate the Russian military community is increasingly aware of issues in sustaining mobilization efforts and different actors are seeking to apportion blame as Russian operations continue to stall. 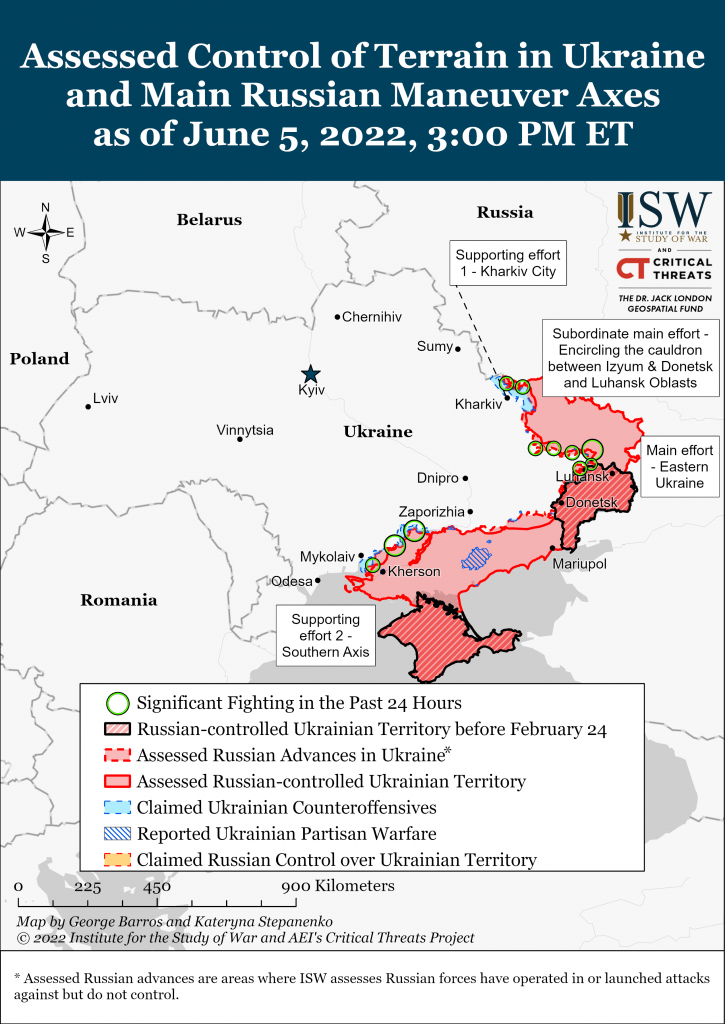 Russian forces continued efforts to advance toward Slovyansk from Izyum and made limited, unsuccessful attacks on June 5. The Ukrainian General Staff reported that Russian forces conducted unsuccessful ground assaults on Bohorodychne and Dovhenke, 35 and 25 km southeast of Izyum, respectively.[11] Russian forces are additionally making incremental advances to the northwest of Lyman around Svyatohirsk, about 30 kilometers directly north of Slovyansk, and reportedly advanced to within 15 km of Slovyansk.[12] The Russian effort in this area is likely intended to link advances southeast of Izyum with Russian operations to the north and west of Lyman, with both axes converging on Slovyansk. However, Russian forces remain unlikely to make notable advances on this front as Russian troops continue to prioritize Severodonetsk at the expense of other lines of effort. 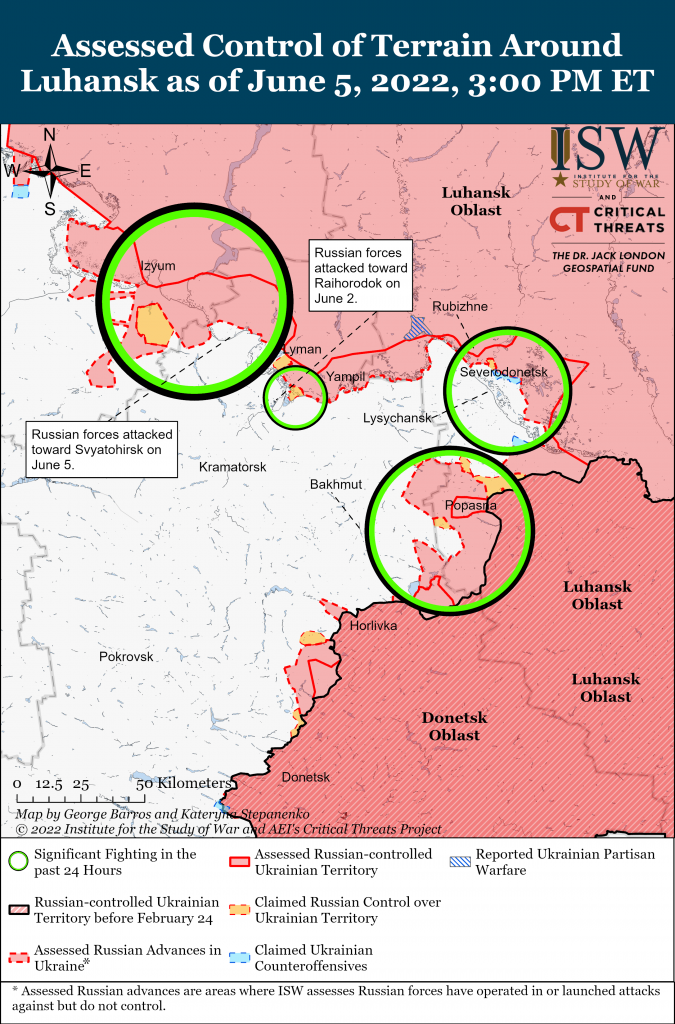 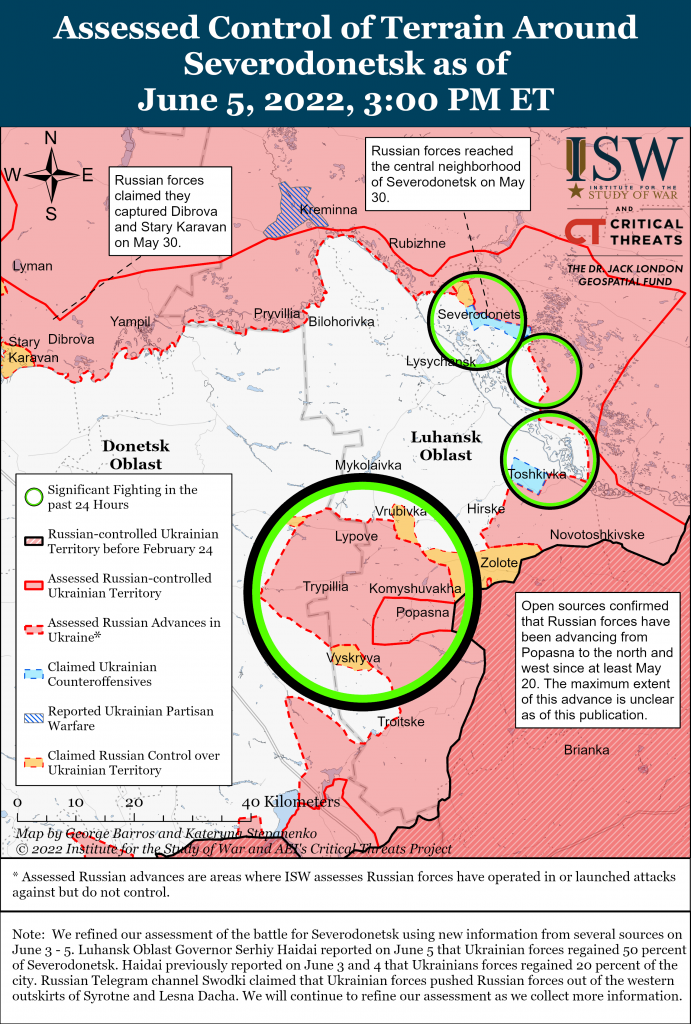 Russian forces continued air, artillery, and ground attacks to the east of Bakhmut but did not make any confirmed advances on June 5.[17] The Ukrainian General Staff reported that Russian forces transferred 20 units of unspecified weapons and military equipment to replenish losses in the Bakhmut area, indicating that Russian forces are sustaining casualties in their continued efforts to gain control of ground lines of communication (GLOCs) to the northeast of Bakhmut.[18] Russian forces continued ground assaults on the eastern arc of Bakhmut in Bilohorivka, Mykailivka, and Dolomitne.[19] The Russian grouping in the Donetsk City-Avdiivka area did not engage in any confirmed advances on June 5.[20]

Russian forces are reportedly fighting to hold their occupied positions north of Kharkiv City following limited Ukrainian counterattacks on June 5. A Russian Telegram channel claimed that Ukrainian forces launched a counterattack against Russian positions in northern Kharkiv Oblast and that Ukrainian forces are attempting to advance in Tsupivka, Turove, Velyki Prokhody, Ternova, Rubizhne (the Rubizhne in Kharkiv Oblast, not in Luhansk) and Staryi Saltiv.[21] ISW cannot independently confirm if Ukrainian forces recaptured these locations or are currently contesting them. However, Ukrainian forces likely seek to take advantage of the Russian focus on Severodonetsk to make prudent counterattacks in other sectors. Russian forces continued artillery strikes against Kharkiv City and its environs and fired on Tsyrkuny, Derhachi, Ruski and Cherkasy Tyshky, Staryi Saltiv, and Kozacha Lopan.[22] 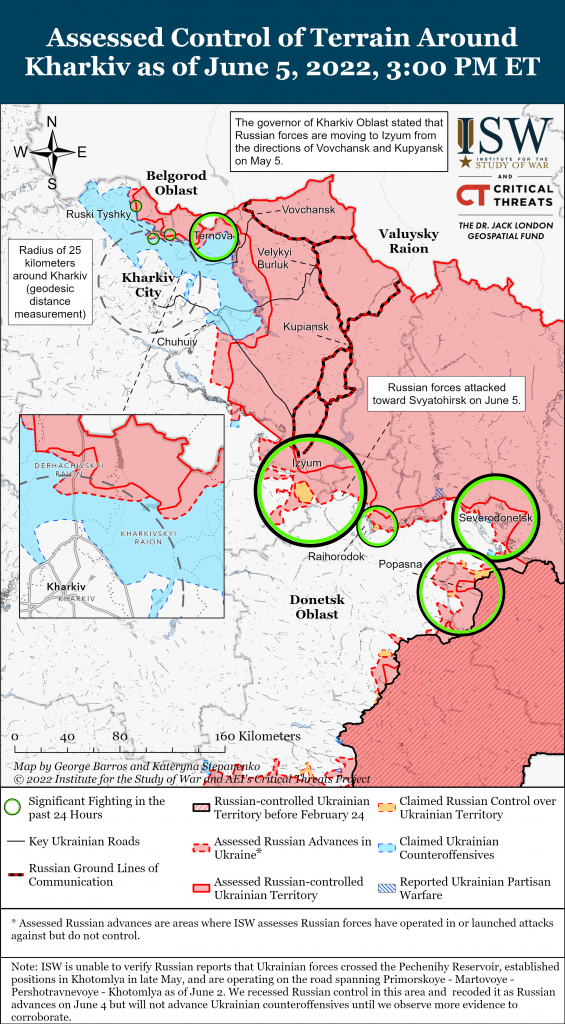 Russian forces continued to hold their defensive lines and fire on Ukrainian positions along the Southern Axis on June 5.[23] The Ukrainian General Staff reported that Russian forces mined the bank of the Inhulets River in anticipation of Ukrainian counteroffensives in Kherson Oblast, indicating that Russian troops are feeling the pressure of recent localized Ukrainian counterattacks along the Kherson-Mykolaiv Oblast border.[24] Russian troops continued unsuccessful ground assaults in northern Kherson around Vysokopillya and Kochubeivka and intensively fired on the line of contact in Zaporizhia, Dnipropetrovsk, and Mykolaiv Oblasts.[25] 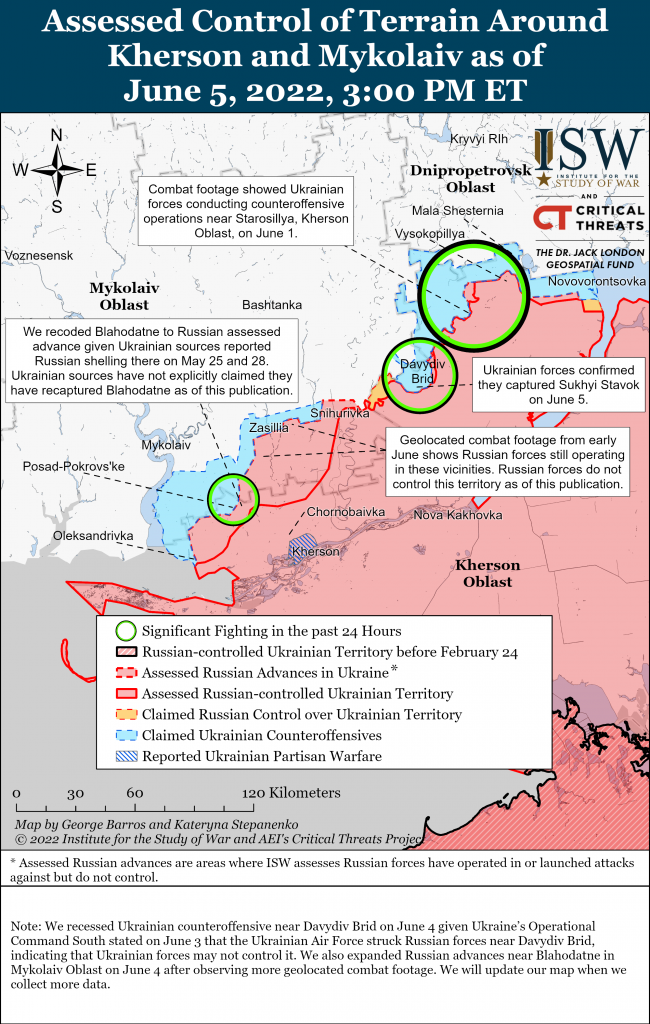 Russian occupation authorities continued efforts to strengthen bureaucratic, societal, and economic control of occupied areas but did not make any major changes on June 5. Advisor to the Mayor of Mariupol Petro Andryushchenko claimed that the occupation administration in Mariupol continues to fail to provide basic social services for citizens and that the city is still facing widespread restrictions on water access.[26]