Ukrainian officials are increasing the urgency of their requests for more-sophisticated Western-provided weapons systems amid reports of growing Russian artillery superiority. Several Western media outlets reported in the last 48 hours that Ukrainian military and government officials are increasingly highlighting the fact that Ukrainian troops are trapped in an “artillery war” on critical frontlines and are at a distinct disadvantage in terms of artillery systems.[1] Deputy Head of the Ukrainian Main Intelligence Directorate (GUR) Vadym Skibitsky stated that Russian troops possess 10 to 15 artillery pieces to every one Ukrainian artillery piece and that Ukrainian forces have almost completely exhausted their artillery ammunition.[2] Considering the current prevalence of protracted positional battles, especially in the Severodonetsk-Lysychansk area, Ukrainian forces urgently need fresh supplies of artillery systems. As Ukrainian forces use the last of their stocks of Soviet-era weapon systems and munitions, they will require consistent Western support to transition to new supply chains of ammunition and key artillery systems. Effective artillery will be increasingly decisive in the largely static fighting in eastern Ukraine.

Russian military authorities continue to struggle with force generation and are facing the consequences of aggressive forced mobilization efforts. Ukraine’s Security Service (SBU) claimed they captured a new group of Russian prisoners of war who reportedly were recruited through a private military company and told they were going to be providing security services but were instead sent to the frontline in Luhansk.[3] The Ukrainian General Staff similarly reported that units comprised of forcibly mobilized personnel are refusing to participate in combat in the Donbas due to high losses.[4] The Ukrainian Main Intelligence Directorate (GUR) cited intercepted phone calls and claimed that Russian soldiers are refusing to fight and are being threatened with prosecution—despite their lack of equipment and weapons within their units.[5] Such reports are consistent with previous reports that Russian forced mobilization efforts are self-destructive and may result in mounting discontent and declining morale and discipline.[6] 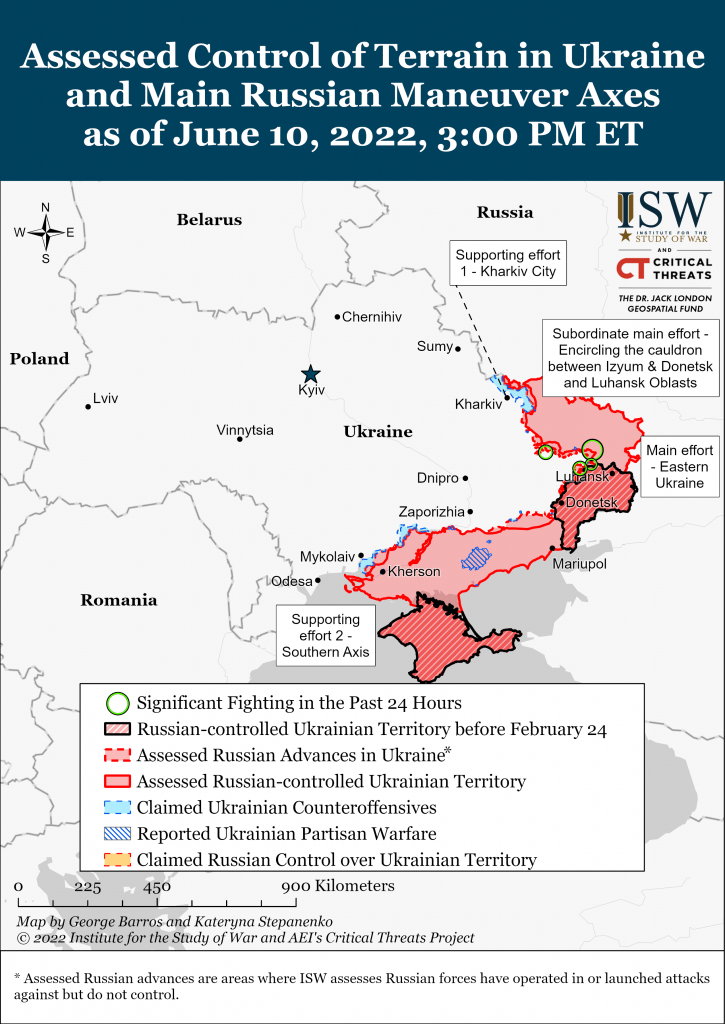 Russian forces continued ground assaults within Severodonetsk but have yet to establish full control over the city as of June 10. Ukrainian sources, including the Ukrainian General Staff and Head of the Luhansk Regional State Administration Serhiy Haidai, noted that Ukrainian troops still control the Azot Industrial zone and the Bakhmut-Lysychansk highway but did not provide any more details on the situation within the city.[7] Russian forces continued to heavily shell Lysychansk, Ustynivka, Toshkivka, and Zolote, likely to support operations in Severodonetsk and interdict Ukrainian supply efforts.[8] Much like the previous fighting in Mariupol, the exact nature of the control of urban areas in Severodonetsk likely remains obfuscated as the information environment surrounding hostilities becomes increasingly restricted.

Russian forces continued to prepare for offensive operations from the southeast of Izyum and west of Lyman toward Slovyansk and likely made marginal gains north of Slovyansk on June 10.[9] The Ukrainian General Staff stated that 30 Russian battalion tactical groups (BTGs) are now operating in the direction of Kharkiv Oblast, 10 more than previously reported on June 3.[10] Russian forces on this axis are continuing to prioritize efforts to link advances in southeast Kharkiv Oblast with efforts in northwestern Donetsk Oblast.[11] However, these BTGs have likely suffered heavy combat losses and may be comprised of the remnants of other units. Ukrainian reports of an additional 10 BTGs operating on this axis likely indicate that the Kremlin has reorganized its units and possibly deployed some reinforcements, but it is unlikely that Russian forces have truly increased their available combat power by 50%. Additionally, Russian attacks remain largely road-bound and confined to narrow frontages, and Russian forces will likely struggle to leverage any new weight of numbers.

A Russian Telegram channel stated that Russian forces seized Pryshyb on June 9 and are conducting ground assaults on Sydrove, two villages south of Sviatohirsk and about 20 km north of Slovyansk.[12] While ISW cannot confirm these claims, they are indicative of continued Russian efforts to push southward from Sviatohirsk and suggest that Russian forces have successfully crossed the Siverskyi Donets River in the Sviatohirsk-Tetyanivka area.[13]

Russian forces conducted ground, air, and artillery attacks to the east of Bakhmut on June 10 in a continued effort to cut the Bakhmut-Lysychansk highway. [14] The Ukrainian General Staff reported that Russian forces are conducting ground assaults on Nyrkove, Mykolaivka, Nahirne, and Berestove (all settlements east of Bakhmut along the T1302 Bakhmut-Lysychansk highway) and that they are advancing on the Vozdvyzhenka-Roty line from the south of Bakhmut.[15] 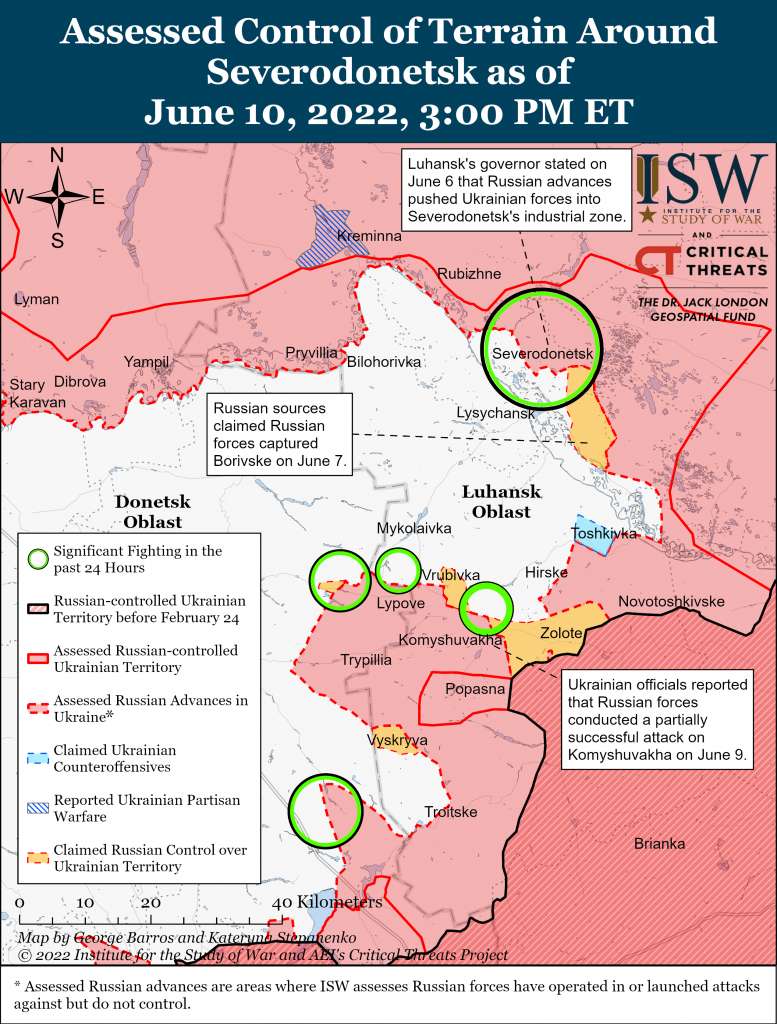 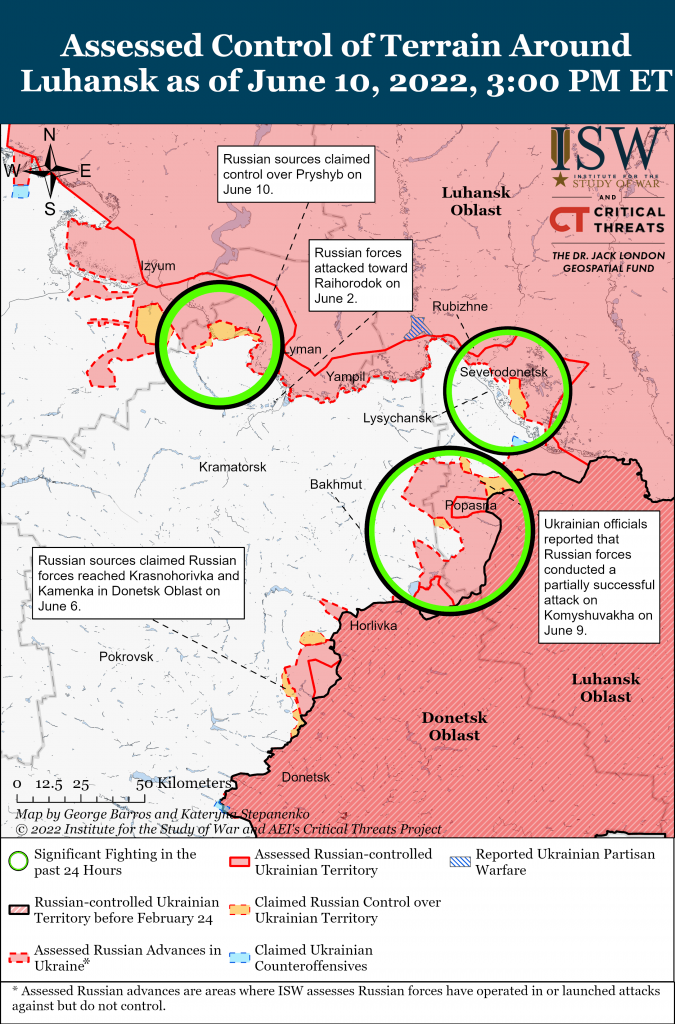 There were no significant developments in northern Kharkiv Oblast on June 10. Russian forces continued defensive operations to prevent further Ukrainian advances toward the international border and fired on Ukrainian positions in and around Kharkiv City.[16] 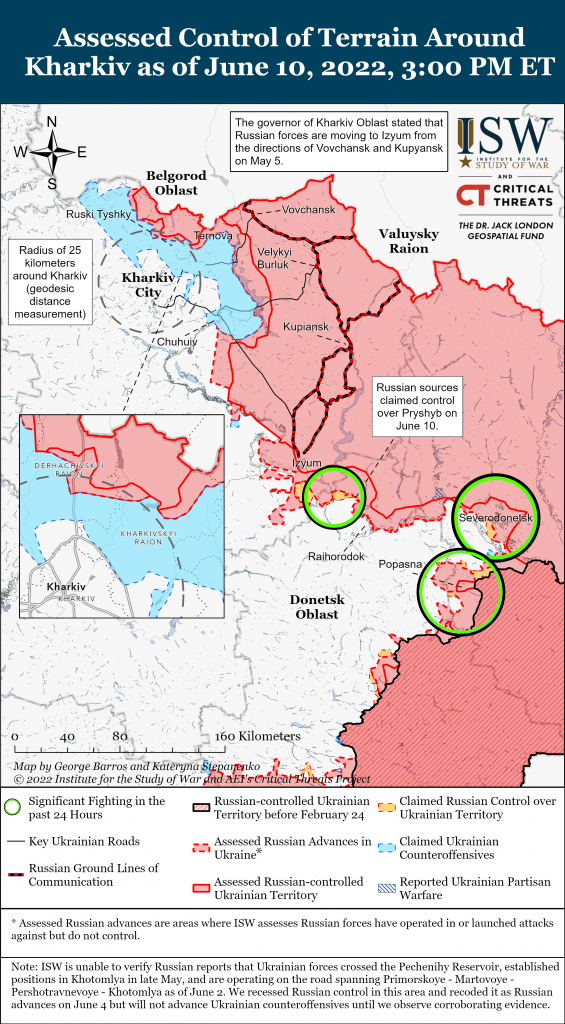 Russian forces continued to strengthen their defensive lines and conducted ground and artillery attacks along the Southern Axis on June 10.[17] The Ukrainian General Staff noted that Russian forces focused on improving the fortification of their second and third lines of defense and carried out camouflage measures to support defensive operations.[18] Russian sources notably claimed that Russian troops took control of the Kinburn Split–a small peninsula near Ochakiv in the northern Black Sea, on the southern border of Mykolaiv and Kherson oblasts.[19] Russian forces have consistently bombarded Ukrainian naval assets in Ochakiv for the last month, and if these Russian claims are true, control of the Kinburn Split will allow Russian troops to exert greater control of the northwestern Black Sea coast. Russian troops continued to fire on various locations in Mykolaiv, Dnipropetrovsk, Zaporizhia, and Kherson oblasts.[20] 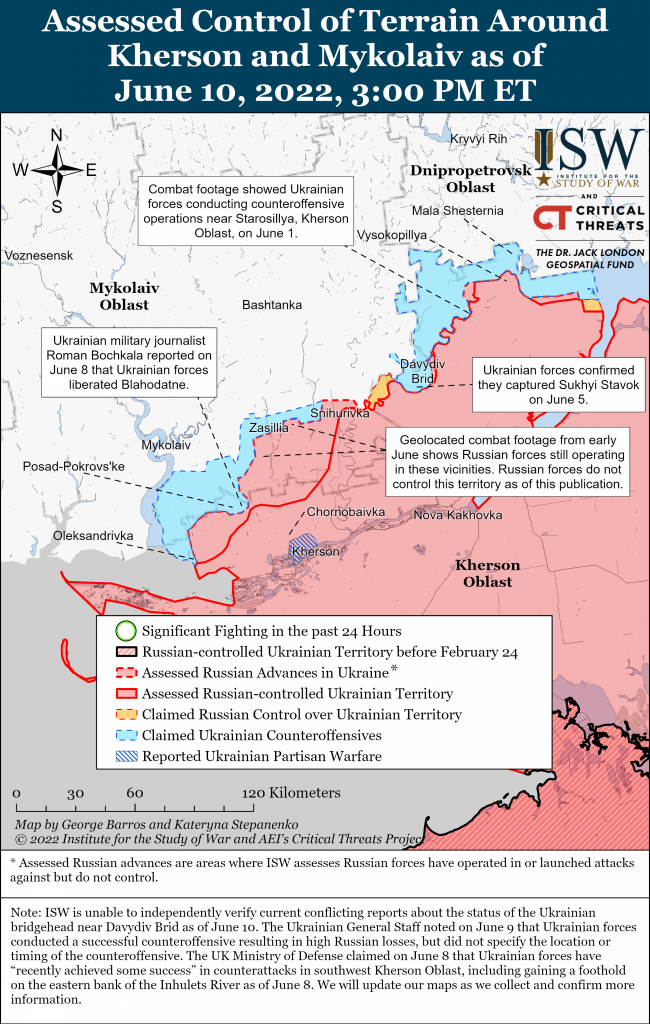 Russian occupation authorities continued measures to set conditions for administrative control of occupied areas on June 10. Ukraine’s Southern Operational Command reported that Russian-backed political collaborators in Kherson Oblast initiated a new wave of unspecified preparations for a referendum on the annexation of occupied territories directly into Russia.[21] Russian occupation authorities are additionally exerting greater control through the education sector and Russian officials are reportedly planning to retrain teachers in the Donbas using Russian curricula.[22] Advisor to the Mayor of Mariupol Petro Andryushchenko similarly reported that occupation authorities in Mariupol have begun importing Russian textbooks into schools in the city.[23] Despite Russian efforts to consolidate control of occupied areas through educational means, occupation authorities are still largely unable to provide adequate social or medical services for residents of occupied territories, and the medical system in Mariupol is reportedly near collapse as a result of mismanagement by Russian authorities.[24]