Russian forces entered major Ukrainian cities—including Kyiv and Kherson—for the first time on February 25. Russian forces’ main axes of advance focused on Kyiv (successfully isolating the city on both banks of the Dnipro River). Russian military operations along Ukraine’s northern border have been less well-planned, organized, and conducted than those emanating from Crimea. They have also been less successful so far. The divergence in performance likely arises in part from differences in the composition and organization of the Russian ground forces elements in the Western Military District and Belarus (to Ukraine’s north) and Southern Military District and Black Sea Fleet (to its south and east), as ISW has previously observed.[1] Determined and well-organized Ukrainian resistance around Kyiv and Kharkiv has also played an important role in preventing the Russian military from advancing with the speed and success for which it had reportedly planned.[2] The Russian military has deployed additional forces to southeastern Belarus, likely beyond those Moscow had planned to use against Ukraine, to offset these problems and challenges. Russian forces remain much larger and more capable than Ukraine’s conventional military, however. Russia will likely defeat Ukrainian regular military forces and secure their territorial objectives at some point in the coming days or weeks if Putin is determined to do so and willing to pay the cost in blood and treasure. 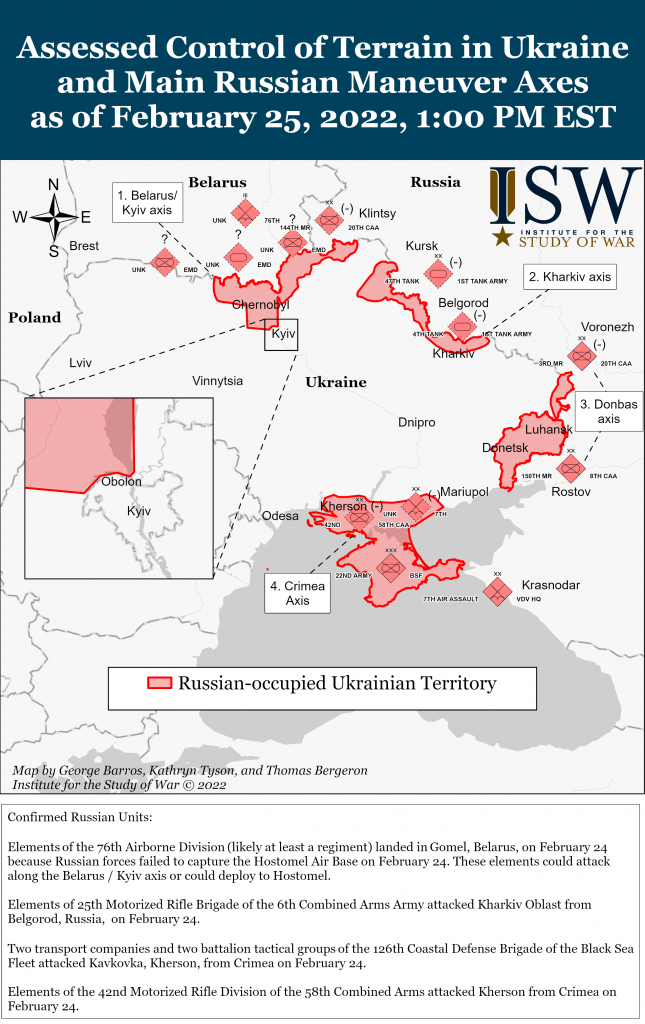 Russian forces carried out additional air and missile strikes on Kyiv and other major cities around 3:00 am local time on February 25. ISW cannot confirm the frequency and targets of overnight Russian strikes at this time. The Ukrainian General Staff reported that Russian forces are increasingly targeting civil infrastructure and residential buildings “to intimidate the population of Ukraine.”[3] Russian forces continue to refrain from using the likely full scale of Russian air and missile capabilities, likely seeking to limit the negative imagery of heavy Ukrainian civilian casualties. However, Russian forces will likely increase their use of bombardments in coming days to overcome heavier-than-anticipated Ukrainian resistance.

Russian ground forces are advancing on four primary axes, discussed in turn below:

1. Belarus/Kyiv axis: Russian forces entered the outskirts of Kyiv on the west bank of the Dnipro on February 25. Russian forces have so far failed to enter Kyiv’s eastern outskirts. They have abandoned for now the failed attempt to take the city of Chernihiv and are instead bypassing it. Elements of the 76th VDV (Airborne) division have concentrated in southeastern Belarus likely for use along the Chernihiv-bypass axis toward Kyiv in the next 24 hours.

2. Kharkiv axis: Russian forces will likely envelop Kharkiv in the next 24 hours after failing to enter the city through frontal assaults on February 24. Russian forces are now advancing on a broad front along the northeastern Ukrainian border as of February 25.

3. Donbas axis: Russian forces have achieved little success on the frontal assaults or the envelopment but may not have intended to do more than pin Ukrainian forces in the east. The Russians have not weighted their ground offensive efforts toward breaking through Ukrainian defensive positions on the line of contact, taking Mariupol from the east, or driving rapidly through Luhansk Oblast to the north. Ukrainian forces remain largely in their original defensive positions in the east. The Russians may be content to leave them there while concentrating on capturing Kyiv and imposing a new government on Ukraine. They may alternatively seek to envelop and destroy Ukrainian forces at and near the line of contact at a later date.

4. Crimea axis: Russian forces fully captured Kherson and are likely on the verge of seizing Melitopol in the east. Unconfirmed reports indicate that Russian forces had bypassed Kherson earlier and headed directly for Mykolaiv and Odessa.