Russian forces continue to make little to no progress in frontal assaults to capture Donetsk and Luhansk Oblasts, their current main effort of the war. Russian units in Donbas face growing morale and supply issues. Additionally, the Ukrainian defenders of Mariupol have outperformed ISW’s previous estimates and continue to hold the city. Russian efforts to generate replacements from reservists and feed damaged units from northeastern Ukraine into frontal assaults in eastern Ukraine are unlikely to increase their chances of success.

Degraded Russian forces in northeastern Ukraine continued to withdraw to Russia and are unlikely to be effective elsewhere, despite ongoing Russian efforts to redeploy them to eastern Ukraine. Ukrainian forces are conducting operations to clear Russians left behind in the withdrawal, and Russian forces are unlikely to hold any cohesive defensive positions. The Ukrainian military reported that elements of Russian VDV (Airborne) units withdrawn from northern Kyiv flew to Belgorod, Russia, on April 4. These units are understrength, missing equipment, and likely highly demoralized. Russian servicemen from the Kyiv axis ordered to renter combat operations may desert or refuse orders, which has occurred in several Russian units throughout the war—including several units that had not yet entered combat. 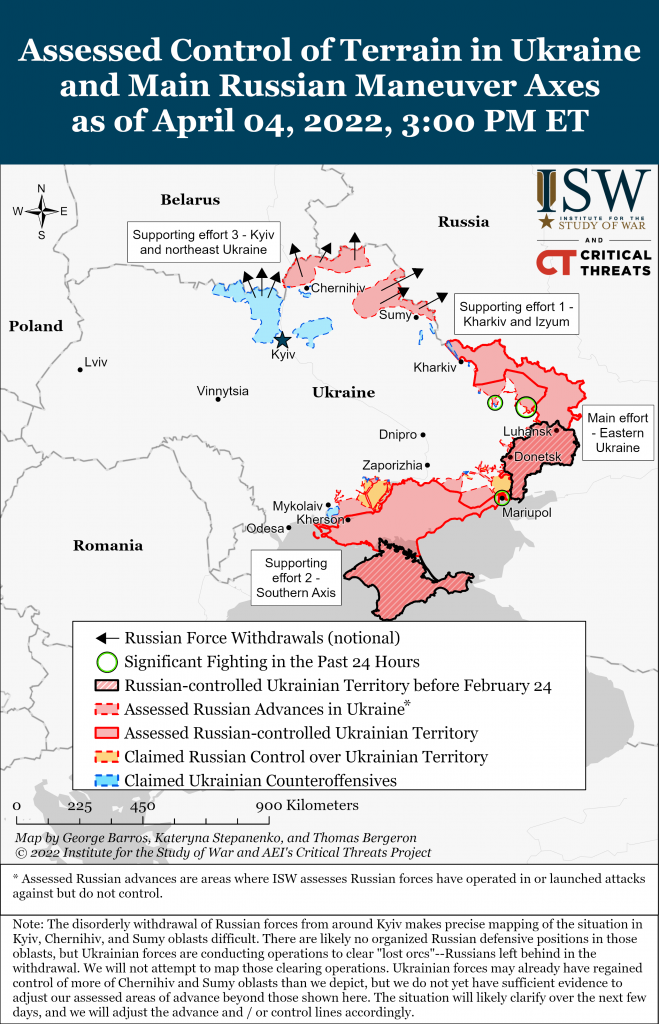 Russian forces already deployed to the Kremlin’s main effort in eastern Ukraine are highly demoralized and do not have a cohesive command structure. The Ukrainian General Staff reported on April 4 that Russian forces are attempting to create an operational group and expand control structures to “prepare for an offensive operation in eastern Ukraine” and are continuing to deploy additional forces to eastern Ukraine.[1] Russian officers will struggle to develop a new command structure from highly damaged units while simultaneously attempting to continue offensive operations. The Ukrainian General Staff reported on April 4 that losses of the 33rd, 255th, and 294th Motor Rifle Regiments of the 20th Motor Rifle Division (part of the 8th Combined Arms Army and likely active in fighting in Donbas or Mariupol) amounted to up to 40% of equipment and personnel, and surviving servicemen are attempting to leave the military.[2] Ukraine’s Military Intelligence Directorate (GUR) separately reported that it acquired a document signed by Deputy Southern Military District commander Pyotr Gibert indicating that Russian officers are compensating their troops with the promise of additional leave days due to the inability to pay promised monthly salaries in cash.[3]

Russian efforts to generate reserves and replace officer casualties continue to face serious challenges. The Ukrainian General Staff stated that the Russian military is deploying students and educators at higher military educational institutions directly to Ukraine to replace mounting officer casualties.[4] The deployment of untrained officers—and more crucially educational staff—to the war in Ukraine will impede the Russian military’s ability to develop its next generation of officers for years to come. The General Staff additionally reported on April 4 that the Kremlin began “hidden mobilization” measures to send approximately 60,000 personnel to Ukraine.[5] The General Staff stated the Kremlin is prioritizing reservists of all ranks who already have combat experience, particularly in Krasnodar Krai, Perm Oblast, the Dagestan Republic, Ingushetia, and Kalmykia. 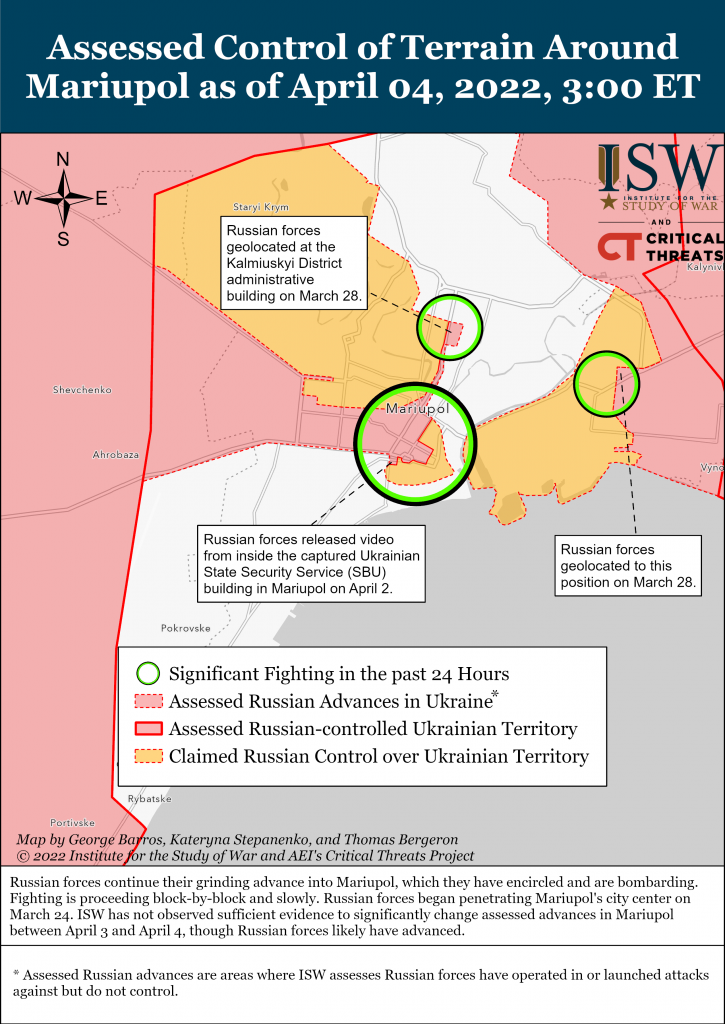 The defenders of Mariupol have outperformed ISW’s previous estimates, and Russian forces are likely taking heavy casualties in ongoing efforts to capture the city. The Ukrainian General Staff reported Russian forces continued efforts to take Mariupol with heavy air and artillery support on April 2.[6] The information environment in Mariupol remains poor and ISW cannot independently verify any territorial changes in the last 24 hours. 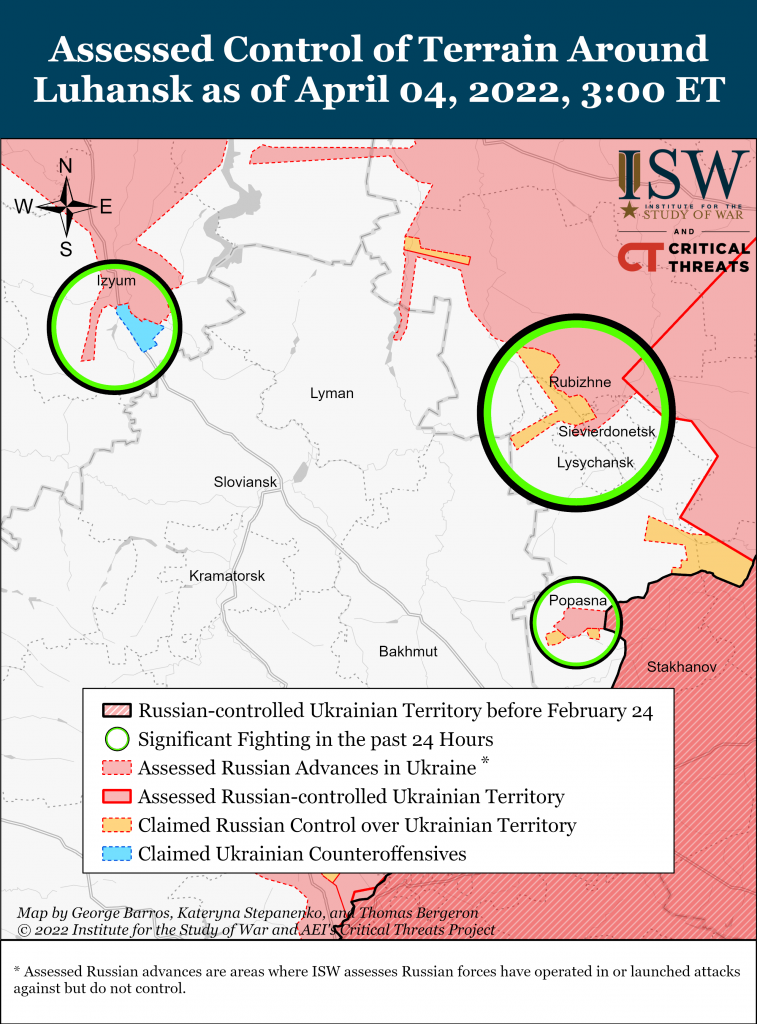 Russian forces in Izyum continued to set conditions on April 4 to resume major offensive operations southeast toward Slovyansk, 50km southeast of Izyum. The Ukrainian General Staff reported that Russian forces in Izyum, including the Russian 237th Tank Regiment and 752nd Motor Rifle Regiment (of the 3rd Motor Rifle Division) are restoring combat capabilities and repairing the bridge across the Siverskyi Donets River, which runs through the center of Izyum.[12] The Ukrainian General Staff reported a Russian tank company conducted a reconnaissance in force in Brazhivka (south of Izyum) on April 4.[13] Social media users additionally observed a column of Russian equipment redeploying from Kupyansk to Izyum on April 4.[14]

The Ukrainian General Staff claimed Ukrainian forces conducted successful counterattacks and retook territory in Kherson Oblast on April 4, though ISW cannot independently verify these attacks or their possible gains.[16] The Ukrainian General Staff previously reported at midnight local time on April 3 that Russian forces prioritized strengthening defensive positions around Kherson and sought to resume offensive operations to capture the entire oblast.[17] Russian attacks in Kherson Oblast in late March and early April were likely intended to regain favorable defensive terrain around Kherson, rather than being attempts to restart major offensive operations toward Mykolayiv.[18] Russian forces in northern Kherson Oblast shelled Ukrainian positions in Novovorontsovka and Maryanske on April 4 but did not conduct any offensive operations towards Kryvyi Rih.[19] 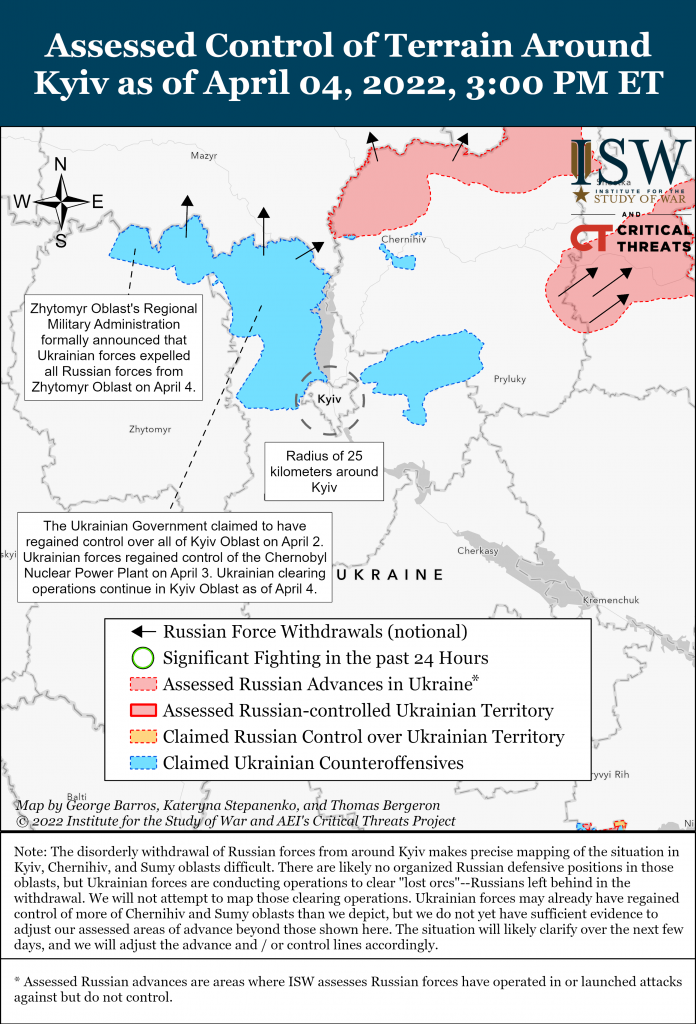 The disorderly withdrawal of Russian forces from northeastern Ukraine makes precise assessments of the situation in Kyiv, Chernihiv, and Sumy oblasts difficult. There are likely no organized Russian defensive positions in those oblasts, and Ukrainian forces are conducting operations to clear Russians left behind in the withdrawal. We will not attempt to map those clearing operations or track their precise locations. Ukrainian forces may already have regained control of more of Chernihiv and Sumy oblasts than we depict, but we do not yet have sufficient evidence to adjust our assessed areas of advance beyond those shown in the accompanying maps. The situation will likely clarify over the next few days, and we will adjust our maps and written assessments accordingly.

Russian forces withdrawn from the Kyiv axis are highly unlikely to be effectively deployed elsewhere in Ukraine and are likely a spent force. Ukrainian forces control the entirety of Kyiv and Zhytomyr oblasts as of April 4, though the Ukrainian General Staff warned that Russian aircraft based in Belarus will likely continue to strike targets around Kyiv.[20] The Ukrainian General Staff reported at midnight local time on April 3 that Russian forces are regrouping in Belarus, and several VDV units, likely from the 76th Airborne Division, are deploying to Belgorod via transport aircraft.[21] These units are understrength, missing equipment, and likely highly demoralized. Russian servicemen from the Kyiv axis ordered to renter combat operations may desert or refuse orders, which has occurred in several Russian units throughout the war—including several units that had not yet entered combat. Russian efforts to use this spent force in combat operations will likely fail.

Russian forces have almost completely withdrawn from Chernihiv and Sumy Oblasts and will likely completely vacate these regions in the coming days. The Ukrainian General Staff reported on April 4 that Russian units from the Central Military District continued to withdraw from Chernihiv city, and Ukrainian forces recaptured several towns in Chernihiv Oblast.[22] The head of Sumy’s regional administration stated on April 4 that there are “almost no [Russian] troops in the Sumy region” and Ukrainian forces are clearing the region of ”single units [and] small groups of Russian forces,” but ISW cannot independently confirm full Ukrainian control of these oblasts to the Russian border.[23]