Further Russian reinforcements to the Izyum axis are unlikely to enable stalled Russian forces to achieve substantial advances. Elements of unspecified Eastern Military District units and several air-defense assets are reportedly deploying from Belgorod to the Izyum front to support likely degraded Russian units attempting to advance south of the city. These forces are unlikely to enable Russian forces to break the current deadlock, as Russian attacks remain confined to two major highways (toward Slovyansk and Barvinkove) and cannot leverage greater numbers. Several successful Ukrainian counterattacks out of Kharkiv city in the last 72 hours have additionally recaptured a ring of suburbs north and east of the city and may additionally force Russian forces to redeploy units intended for the Izyum axis to hold these positions. Russian forces appear increasingly unlikely to achieve any major advances in eastern Ukraine, and Ukrainian forces may be able to conduct wider counterattacks in the coming days. 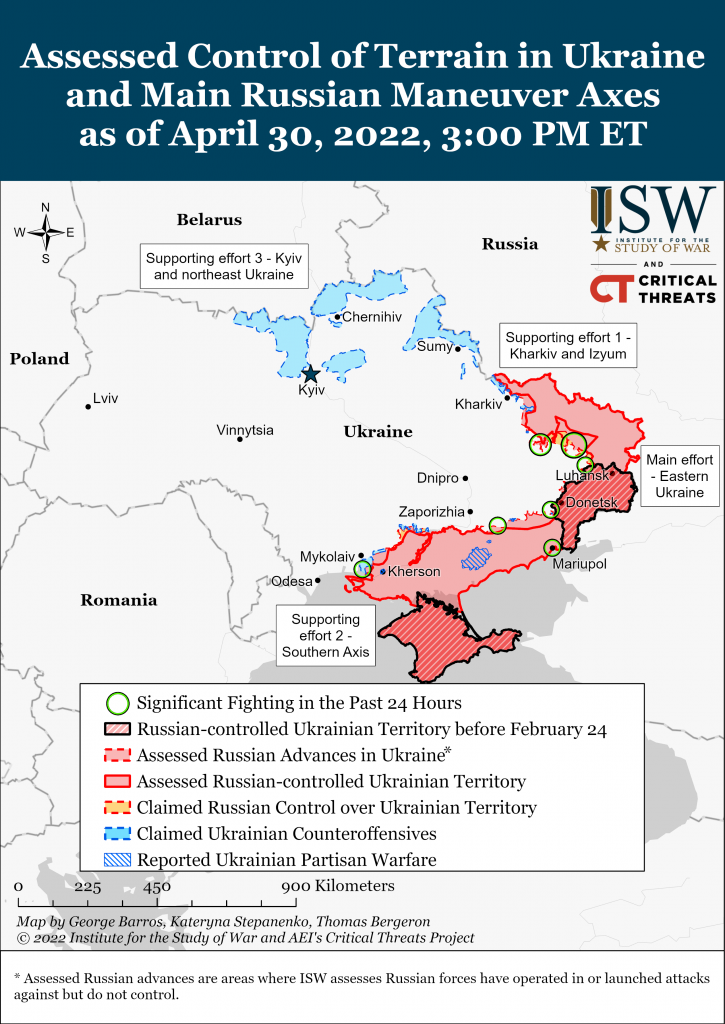 Russian forces remaining in Mariupol, including elements of the 810th Naval Infantry Brigade, continued to block Ukrainian troops in the Azovstal Steel Plant and carried out airstrikes on April 30.[i] Occupying Russian forces are intensifying occupation measures through Mariupol. Advisor to the Mayor of Mariupol Petro Andryushchenko stated that abandoned homes in the Staryi Krym region of Mariupol are being resettled under DNR-issued permits and that the Kremlin plans to return Mariupol residents who were previously forcibly deported to Russia once Russian forces consolidate control of the city.[ii] Head of the self-proclaimed Donetsk People’s Republic (DNR) Denis Pushilin announced the “Great Construction” of Mariupol on April 30.[iii] Pushilin claimed that DNR forces, with support from the Kremlin, will rebuild the infrastructure of Mariupol as soon as the Ukrainian positions in Azovstal are “resolved.” Russian and DNR troops will likely advance reconstruction and resettlement operations to further consolidate administrative control of Mariupol and boost the Kremlin’s claim to have fully captured the city. 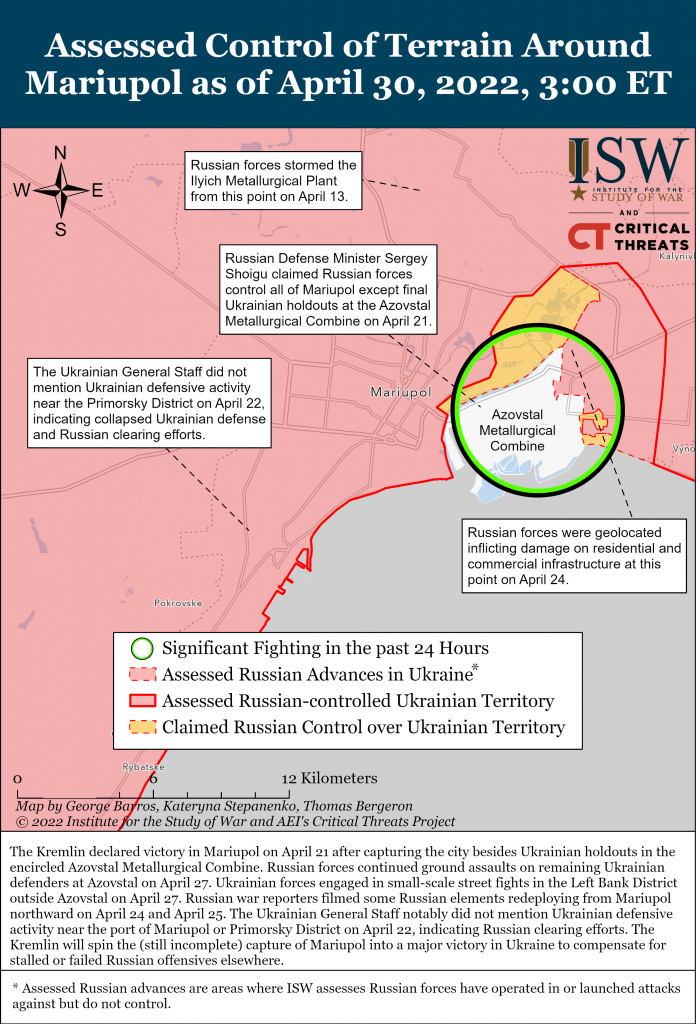 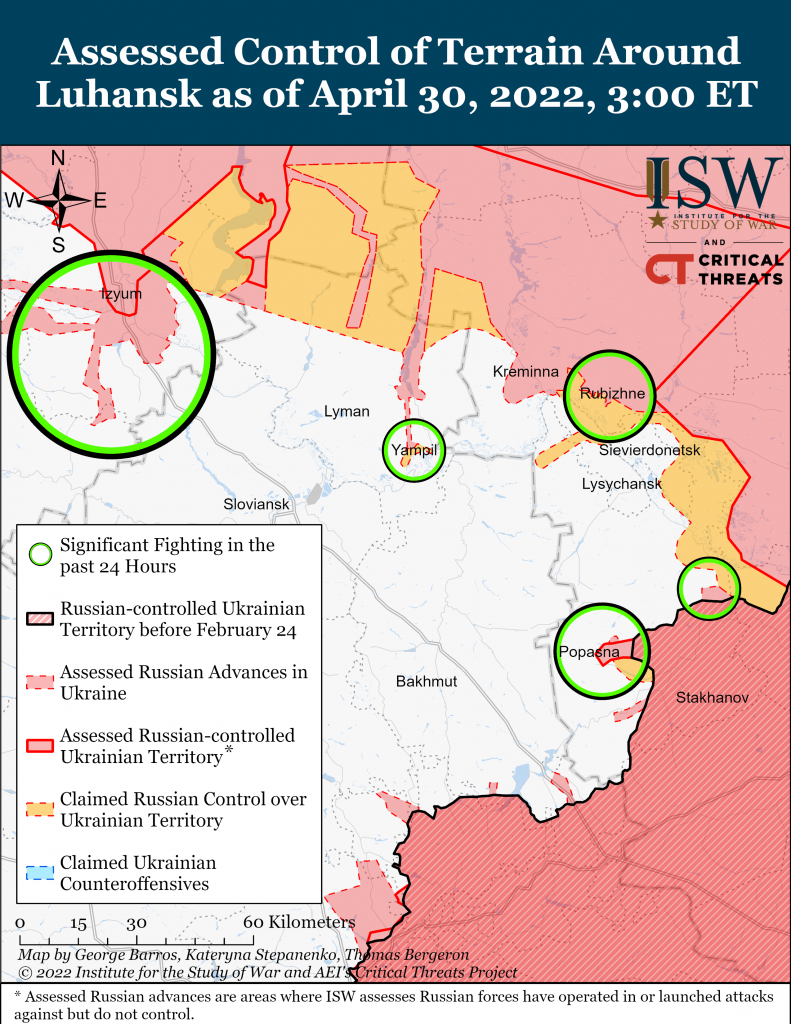 Russian forces continued to attack southeast and southwest from Izyum but did not secure any confirmed advances in these directions on April 30.[vi] The Ukrainian General Staff stated that elements of the 1st Guards Tank Army, 20th Combined Arms Army, 35th Combined Arms Army, 68th Army Corps, and likely 2 battalion tactical groups (BTGs) of the 76th Airborne Division are trying to advance southwest to Barvinkove and southeast to Slovyansk.[vii] The Ukrainian General Staff additionally reported that Russian forces are deploying unspecified elements of the Eastern Military District to the Izyum area to support these advances.[viii] The Ukrainian General Staff additionally indicated that additional Russian air-defense forces are deploying to cover Russian troops in the Izyum area.[ix] A Pro-Russian military source claimed that Russian troops encircled approximately 600 Ukrainian troops in Yaremivka, about 25 kilometers southeast of Izyum on the road to Slovyansk, although ISW cannot independently confirm this report.[x] Ukrainian sources claimed an artillery strike on a Russian command post near Izyum killed Russian Major General Alexei Simonov on April 30, although ISW cannot confirm preliminary reporting at this time.[xi]

Ukrainian forces continued counterattacks against several positions along an arc spanning from the north to the east of Kharkiv City and recaptured Verkhnya Rohanka, Ruska Lozova, Slobidske, and Prelesne.[xii] Ukrainian troops have recaptured a ring of suburbs around the east of Kharkiv City in the past 72 hours that may allow them to alleviate pressure on residential areas of the city, such as Saltivka, that have been targeted by intensive Russian shelling.[xiii] Ukrainian counterattacks may additionally force Russian forces to redeploy units intended to support the Izyum axis. Russian forces continued to bombard Kharkiv City with air and artillery strikes throughout April 30.[xiv] 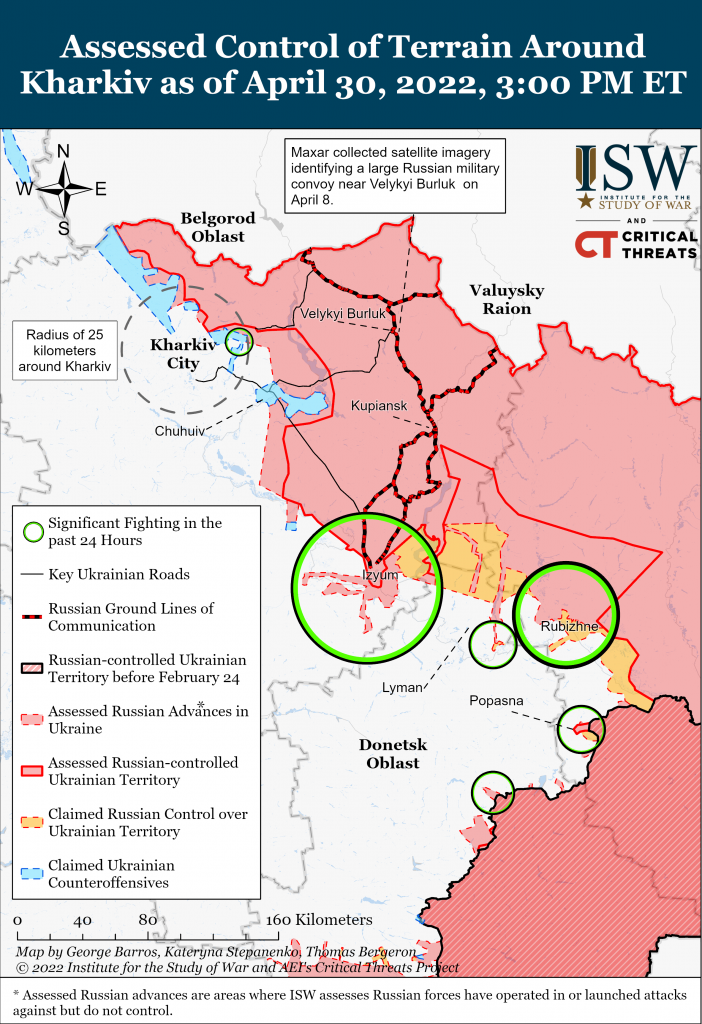 Russian forces continued to prioritize improving their tactical positions and shelling Ukrainian positions on the Southern Axis but did not make any confirmed advances on April 30.[xv] The Ukrainian General Staff notably stated that elements of the 8th and 49th Combined Arms Army, 22nd Army Corps, Black Sea Fleet, and Airborne forces are engaging in combat operations to improve their tactical positions (indicating local attacks to capture key terrain, rather than major offensive operations) and are regrouping and replenishing supplies in preparation for a renewed push to reach the administrative borders of Kherson Oblast.[xvi] Russian forces shelled several points in Zaporizhia, Dnipropetrovsk, and Mykolaiv Oblasts.[xvii] The Ukrainian General Staff stated that Russian forces continue to disseminate disinformation about the threat of Ukrainian troops to the population of Transnistria.[xviii] 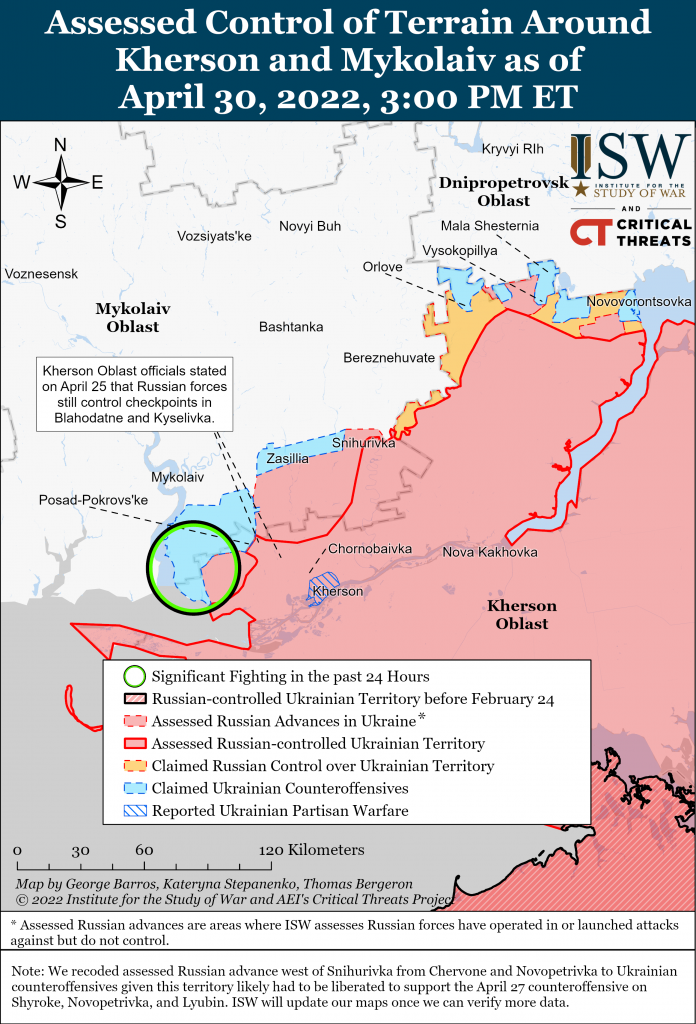 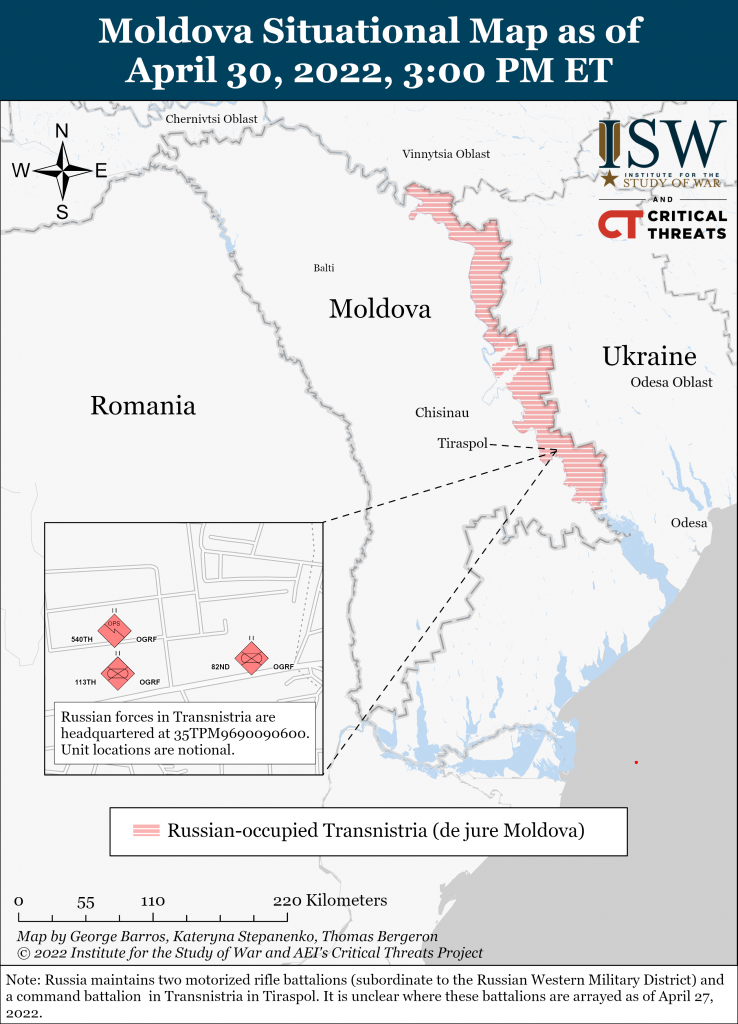