The Kremlin continued to prepare for a likely false-flag missile attack against the Moldovan territory of Transnistria, which is illegally occupied by Russian forces. Russian proxies in Transnistria falsely claimed Ukrainian forces are preparing to attack Transnistria, and Ukrainian intelligence reported Russian forces are preparing to conduct a missile strike on Transnistria and blame Ukraine. Russian and Transnistrian forces also increased their readiness for possible operations in the last 24 hours. Russia may intend to involve Transnistria in the war in Ukraine to utilize Transnistria’s (limited) reserve forces or to launch attacks and shell Ukraine from Transnistrian territory. The Kremlin may alternatively seek to destabilize Moldova itself to raise tensions in Moldova and neighboring Romania and put additional pressure on NATO, possibly seeking to reduce Western military support to Ukraine either by diverting NATO forces to Romania or threatening a wider escalation.

Ukrainian forces likely conducted drone or possibly missile strikes on Russian logistics centers in Belgorod and Voronezh on April 27. Russian sources and social media reported multiple explosions early on April 27, which Ukrainian Presidential Advisor Mikhail Podolyak later euphemistically confirmed were Ukrainian strikes, stating Russian cities cannot “sit out” the invasion of Ukraine and “the disarmament of the Belgorod-Voronezh warehouses is a natural process.”[2] Ukrainian forces will likely conduct further cross-border strikes to disrupt Russian logistics, which the Kremlin will likely falsely frame as an escalation or somehow a war crime. 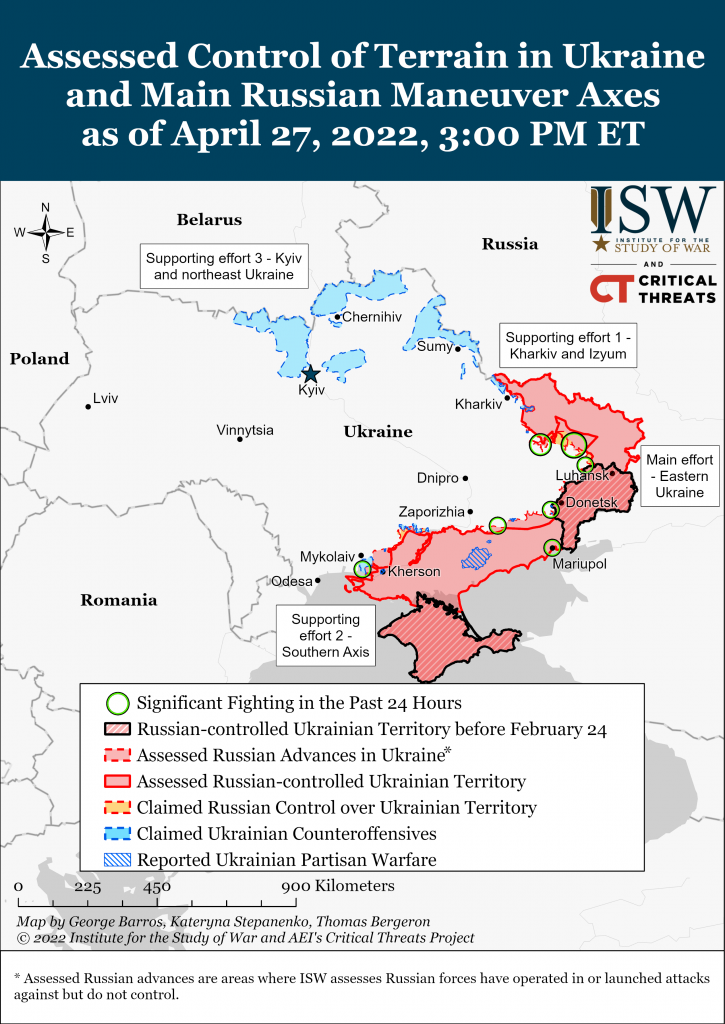 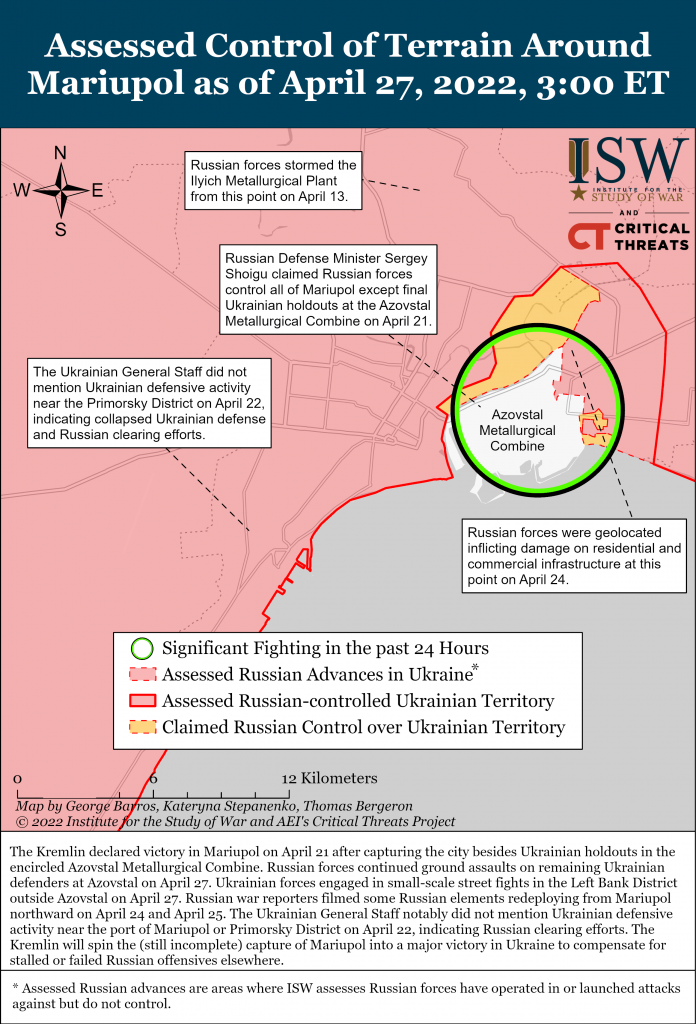 Russian forces are also stepping up occupation and “filtration” measures in Mariupol to consolidate control of the city and turn it into a propaganda victory.[5] Ukraine’s Main Intelligence Directorate (GUR) reported that the Kremlin will hold a press tour in Mariupol on April 28 for Kremlin-loyal outlets – including foreign journalists – including faked witness testimonials about the course of the battle.[6] Andryushchenko separately reported that Russian occupation forces are increasingly restricting civilian movement in Mariupol and “resorting to physical coercion and blackmail” to force Ukrainian citizens to work for the occupation regime.[7] 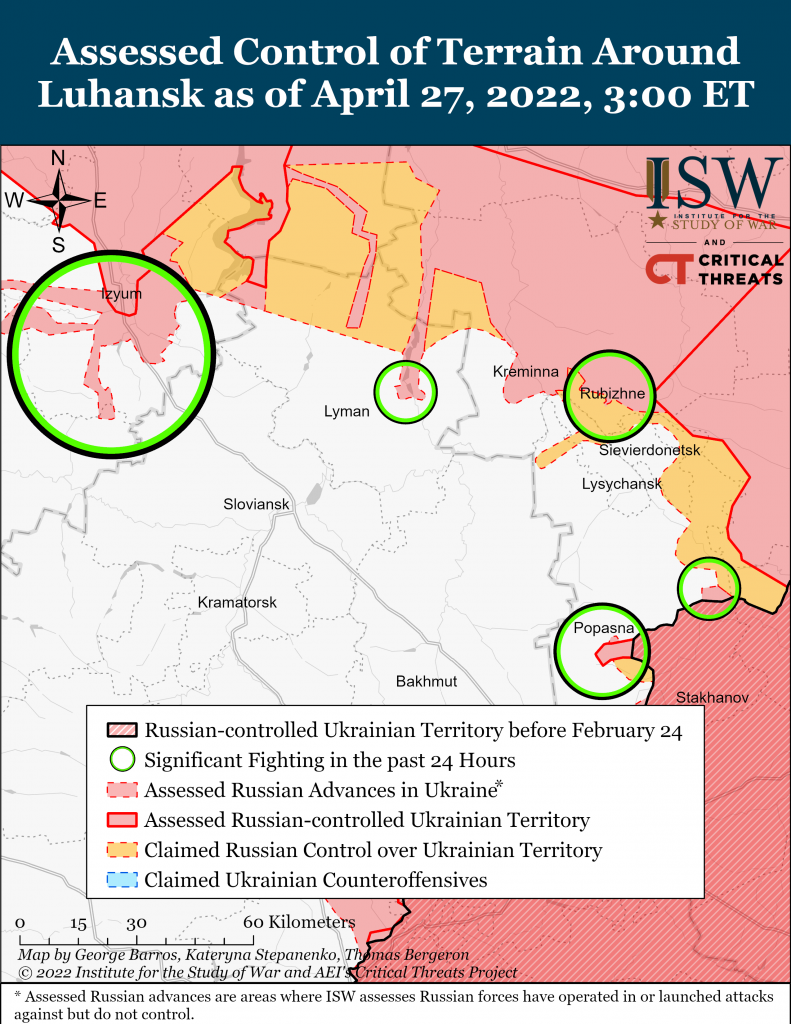 Russian forces made marginal advances in frontal assaults around Severodonetsk, Rubizhne, and Popasna on April 27 and continued to shell the entire frontline.[8] The Ukrainian General Staff confirmed that Russian forces captured Novotoshkirske, a small town 25 km south of Severodonetsk, and attempted to advance further west.[9] Russian forces advancing south from the Svatove area (west of Rubizhne) additionally captured the town of Zarichne.[10] Ukrainian forces repelled Russian attacks in Avdiika, near Donetsk city.[11] Russian forces are making slow progress on these multiple small axes of advance, likely due to their increasing use of concentrated artillery, but their ability to encircle Ukrainian forces and the extent to which they will be able to advance remain unclear. 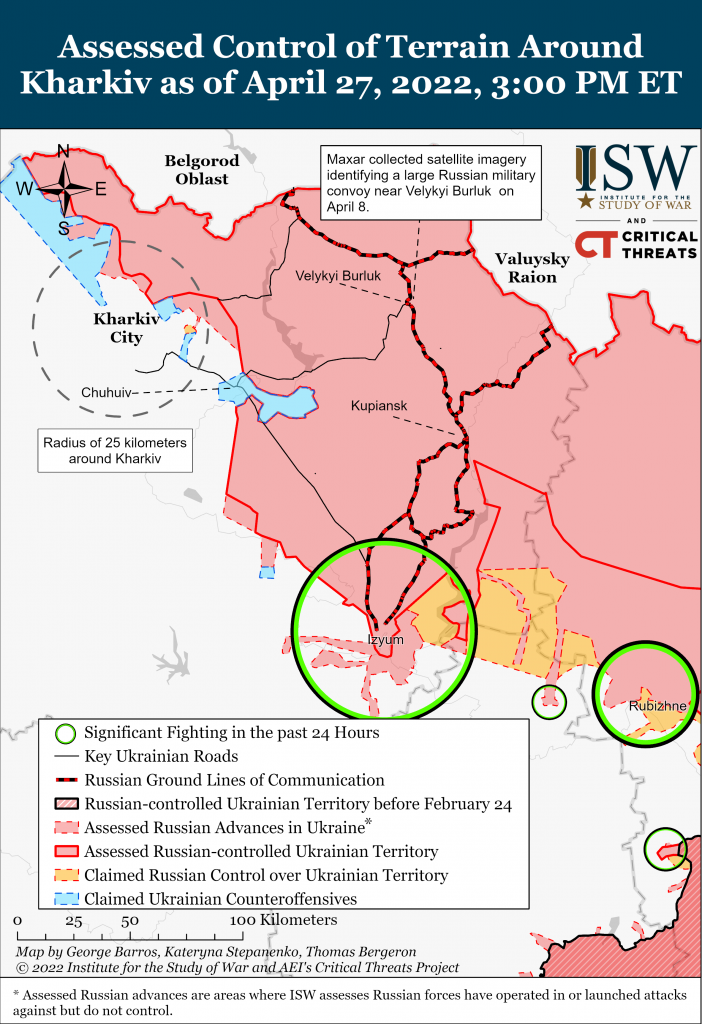 Russian forces in Izyum continued attacks on three lines of advance – southeast towards Slovyansk, southwest towards Barvinkove, and directly west away from Donetsk Oblast – on April 27.[12] The Ukrainian General Staff reported that Ukrainian forces repelled Russian attacks near Nova Dmytrivka, towards Barvinkove, and repelled unspecified attacks towards Slovyansk.[13] The Ukrainian general Staff reported that elements of Russia’s 1st Guards Tank Army, 20th Combined Arms Army (CAA), 35th CAA, and 68th Army Corps are active on the Barvinkove front.[14] Two Battalion Tactical Groups (BTGs) from the 76th Airborne Division – which was heavily damaged in fighting northwest of Kyiv – deployed from Belgorod, Russia, to the Izyum frontlines on April 27.[15] The Ukrainian Ministry of Defense additionally reported that two Iskander-M ballistic missile batteries, likely in part from the 20th CAA’s 448th Missile Brigade, deployed to Belgorod Oblast from an unspecified location on April 27.[16]

Russian forces continued to partially encircle Kharkiv and shell civilian infrastructure across the oblast on April 27.[18] 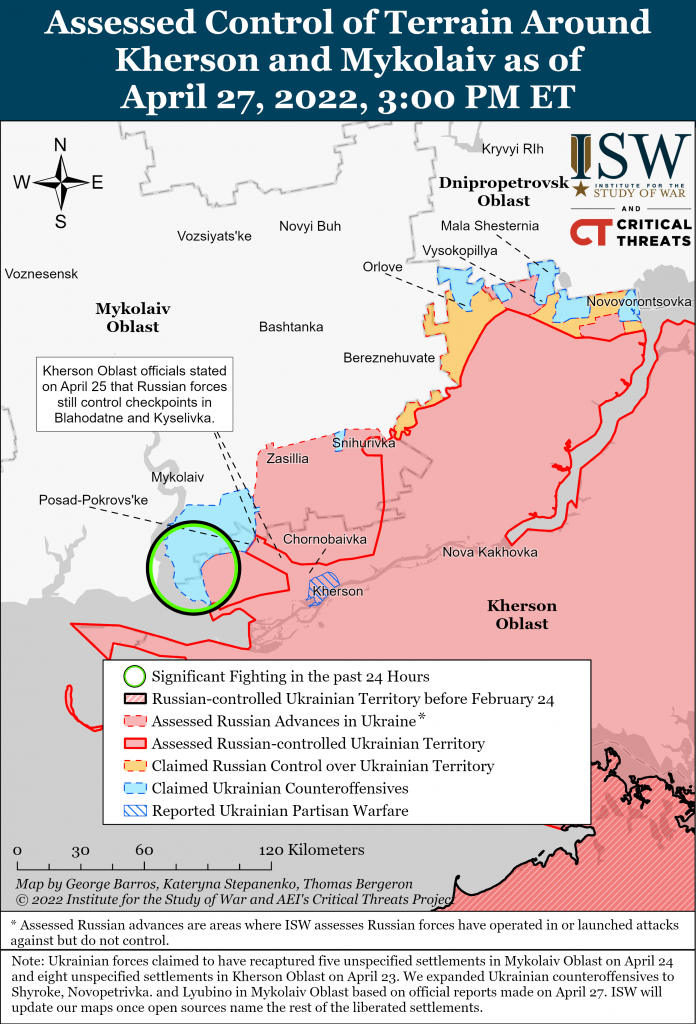 Russian forces continued to shell along the entire line of contact along the southern axis and reinforce forward positions in preparation for the likely resumption of offensive operations towards Mykolayiv and Kryvyi Rih on April 27.[19] Ukrainian Ministry of Defense Spokesperson Oleksandr Motuzyanyk stated that elements of Russia’s 8th CAA, 49th CAA, 22nd Army Corps, coastal troops of the Black Sea Fleet, and airborne troops are reinforcing their forward positions and replenishing ammunition for further operations.[20] The Ukrainian General Staff added that Russian forces are actively conducting aerial reconnaissance in likely preparation for offensive operations.[21] Local fighting continued in the Mykolayiv direction, with Russian forces conducting failed attacks towards Tavriyske and Nova Zorya and Ukrainian forces reportedly recapturing Shyroke, Novopetrivka, and Lyubino, 50 km north of Kherson.[22] Russian forces are likely attempting to recohere forces to launch larger-scale offensive operations in the coming days to capture the entirety of Kherson Oblast, but successful Ukrainian counterattacks are likely delaying and disrupting Russian operations.

Russian occupation forces continued preparations to announce the creation of a “Kherson People’s Republic” (KNR) amid widespread Ukrainian resistance. The Ukrainian General Staff reported on April 27 that Russian forces are printing ballots and conducting a census for a “referendum” and preventing civilians from leaving the occupied territories.[23] Multiple Ukrainian government sources reported that Russian forces are taking several steps to crack down on possible resistance, including reports by the Pivden Operational Command on April 26 that Russian forces are appointing collaborators to local government positions; reports Rosgvardia forces stepped up filtration measures in Kiselivka and Stanislav; and reports that Russian forces are attempting to identify the places of residence of Ukrainian security personnel.[24]  Local social media users additionally shared footage of a large protest against the creation of the KNR in Kherson’s Freedom Square on April 27.[25] The Kremlin likely intends to create further proxy states modeled on the DNR and LNR in Kherson and elsewhere to consolidate its control over occupied Ukrainian territory – both by creating an occupation government and by falsely claiming in negotiations that the territory is occupied by “independent” states, not Russian military forces. 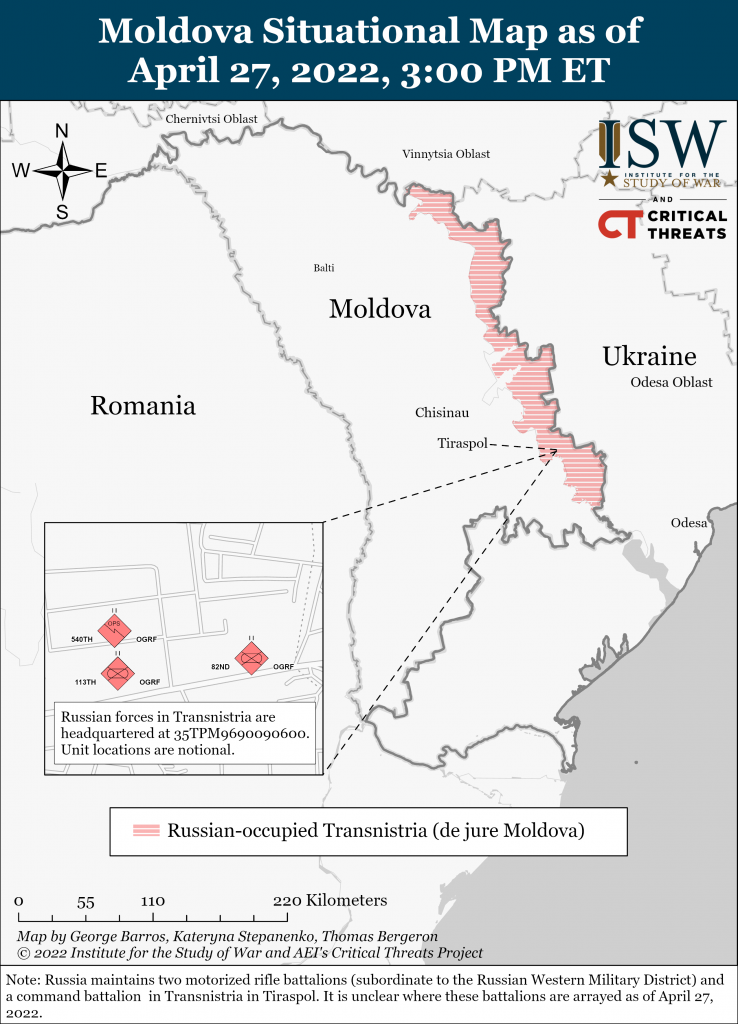 Russian forces also continued to prepare for a likely false-flag missile attack against the Moldovan territory of Transnistria, which is illegally occupied by Russian forces. The Kremlin mobilized Transnistrian proxy forces on April 27 as Russian state media began setting rhetorical conditions for the possible recognition of the self-styled Pridnestrovian Moldavian Republic (PMR) in Transnistria. Russian media is increasingly reporting that Transnistria may need to “protect the interests of the republic” by declaring its independence, echoing language used by the Kremlin prior to its recognition of the DNR and LNR in mid-February.[26] Ukraine’s Pivden Operational Command directly claimed on April 27 that Russian forces are preparing to conduct false-flag missile strikes into Transnistria to accuse Ukraine of attacking the unrecognized republic.[27] Local Transnistrian officials and media reported unconfirmed gunshots and several claimed incidents of Ukrainian drones crossing into Transnistria; ISW cannot independently confirm these claims.[28] The Ukrainian General Staff reported that Transnistria announced a “red level” of threat, increased the readiness of its forces, and strengthened checkpoint security on April 27.[29]