Russian forces conducted precision missile strikes against five Ukrainian railway stations in central and western Ukraine on April 25 in a likely effort to disrupt Ukrainian reinforcements to eastern Ukraine and Western aid shipments. A series of likely coordinated Russian missile strikes conducted within an hour of one another early on April 25 hit critical transportation infrastructure in Vinnytsia, Poltava, Khmelnytskyi, Rivne, and Zhytomyr oblasts.[1] Russian forces seek to disrupt Ukrainian reinforcements and logistics. The Kremlin may have additionally conducted this series of strikes—an abnormal number of precision missile strikes for one day—to demonstrate Russia’s ability to hit targets in Western Ukraine and to disrupt western aid shipments after US Secretary of Defense Lloyd Austin and US Secretary of State Antony Blinken’s surprise visit to Kyiv over the weekend. However, Russian precision strike capabilities will remain limited and unlikely to decisively affect the course of the war; open-source research organization Bellingcat reported on April 24 that Russia has likely used 70% of its total stockpile of precision missiles to date.[2]

Local Ukrainian counterattacks retook territory north of Kherson and west of Izyum in the past 24 hours. Russian forces continue to make little progress in scattered, small-scale attacks in eastern Ukraine. Ukrainian forces are successfully halting Russian efforts to bypass Ukrainian defensive positions around Izyum, and Russian forces are struggling to complete even tactical encirclements. Local Ukrainian counterattacks in Kherson Oblast are unlikely to develop into a larger counteroffensive in the near term but are disrupting Russian efforts to completely capture Kherson Oblast and are likely acting as a drain on Russian combat power that could otherwise support Russia’s main effort in eastern Ukraine. 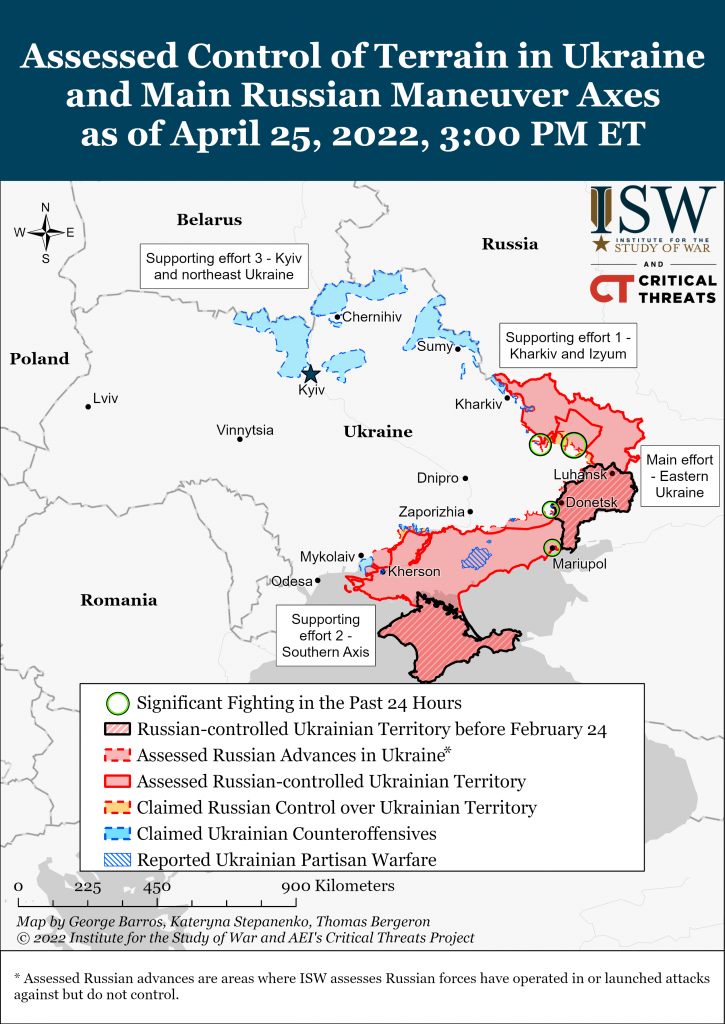 Russian forces resumed ground assaults against Ukrainian defenders in the Azovstal Steel Plant and continued heavy bombardment on April 25 but did not secure any discernable advances.[3] Ukrainian Presidential Advisor Oleksiy Arestovych and advisor to the Mayor of Mariupol Petro Andryushchenko separately reported that Russian forces are carrying out ground attacks against Azovstal despite Russian President Vladimir Putin’s April 21 statement that Russia would cease its assaults on the plant to prevent further Russian casualties.[4] The Ukrainian Main Intelligence Directorate (GUR) claimed that Russia may employ chemical weapons against Ukrainian positions to ”smoke out” defenders and civilians, though ISW cannot independently confirm the possibility of these threats.[5] ISW cannot independently confirm the scale of these reported Russian assaults, but Russian commanders may assess that they will be unable to starve out remaining Ukrainian defenders in the coming weeks, necessitating hasty and likely costly Russian attacks to clear the facility by the Kremlin’s possible self-imposed deadline of May 9. It is otherwise unclear why Russian forces would resume ground attacks on the facility after previously stating their intent to starve out the remaining defenders, who are highly unlikely to be able to break out and are almost certainly low on supplies.

Russian forces continue to consolidate control over occupied Mariupol. Deputy Ukrainian Prime Minister Iryna Verushchuk said that Russia continues to refuse to engage with evacuation efforts, denying Russian claims that Russian forces opened humanitarian corridors to facilitate evacuations from Azovstal.[6] Advisor to the Mayor of Mariupol Petro Andryushchenko stated that Russian troops are using former police officers who were mobilized into the militia of the Russian-backed Donetsk People’s Republic (DNR) to patrol the streets.[7] Russian artillery continues to inflict massive damage on civilian infrastructure in areas of Mariupol that are already under Russian control.[8] Russian naval infantry units are reportedly redeploying away from Mariupol in the direction of Volnovakha, but ISW cannot independently confirm the status of such redeployments at this time.[9] 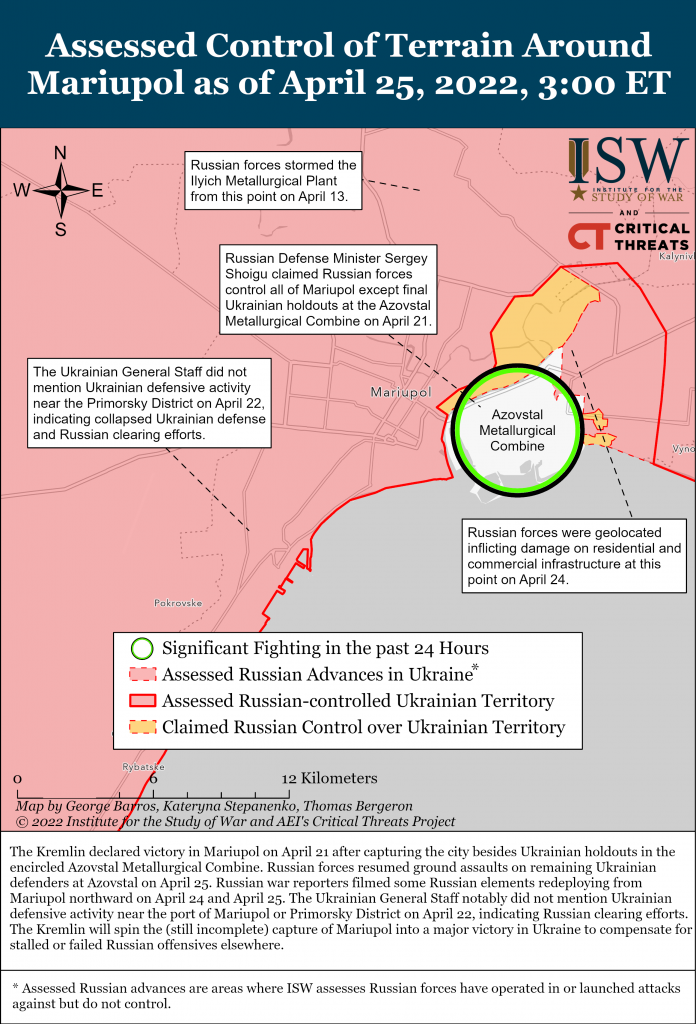 Russian forces continued shelling along the entire frontline in Donetsk and Luhansk and did not secure any confirmed advances in continuing ground attacks on April 25.[10]  The Ukrainian General Staff reported that Ukrainian forces repelled Russian assaults against Koroviy Yar and Rubizhne and that fighting is ongoing in Popasna.[11]  Chechen leader Ramzan Kadyrov claimed on April 25 that Russian forces have completely captured Rubizhne (after making a similar claim on April 20), though this claim is likely false.[12] The Ukrainian General Staff reported that elements of the 30th Separate Motorized Infantry Brigade of the 2nd Guards Combined Arms Army suffered heavy losses around Severodonetsk, confirming that Central Military District units previously active on the Chernihiv axis are fighting in eastern Ukraine.[13] 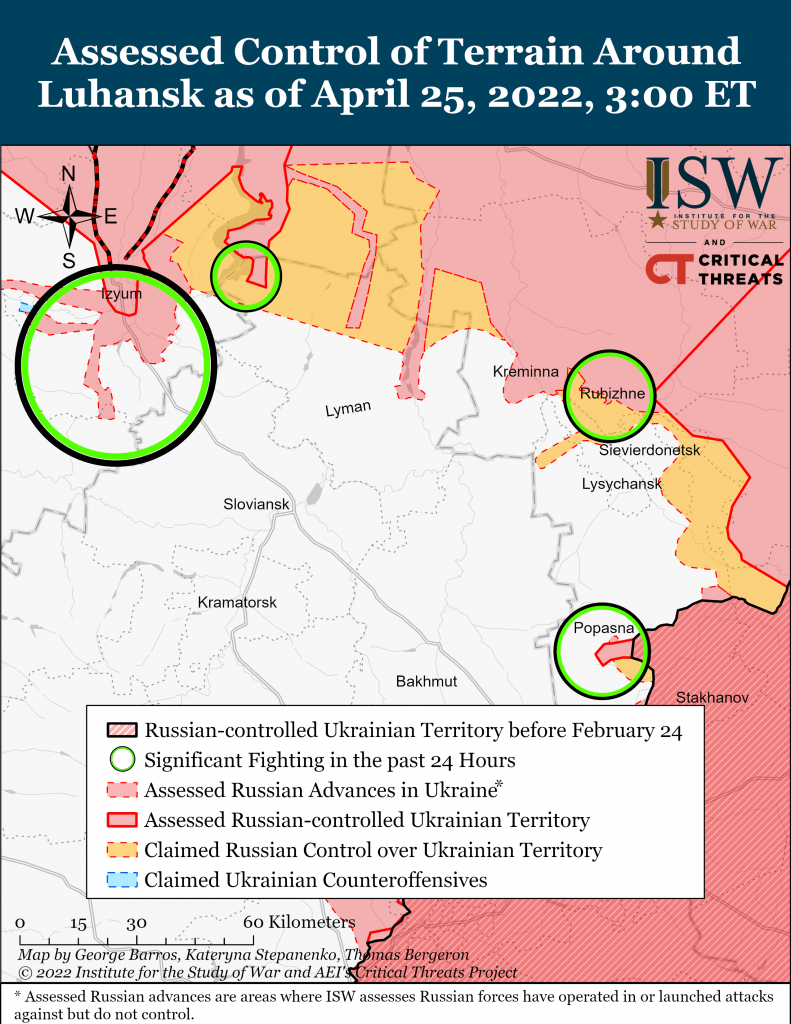 Russian forces continued to mount unsuccessful ground offensives southward from Izyum toward Barvinkove and Slovyansk on April 25.[14] Ukrainian forces reportedly conducted a limited counterattack and expelled Russian troops from Zavody, about 20 km directly west of Izyum.[15] Russian forces are likely trying to advance through Zavody to bypass deeper-entrenched Ukrainian defenses along the direct highway route to Barvinkove. Effective Ukrainian counterattacks are likely impeding the ability of Russian forces to conduct even tactical encirclements, let alone the operational encirclement of Ukrainian forces in eastern Ukraine that Russian forces likely intend to achieve. Russian forces maintained their positions around Kharkiv city and continued artillery and aviation strikes on Kharkiv city and the surrounding settlements.[16] 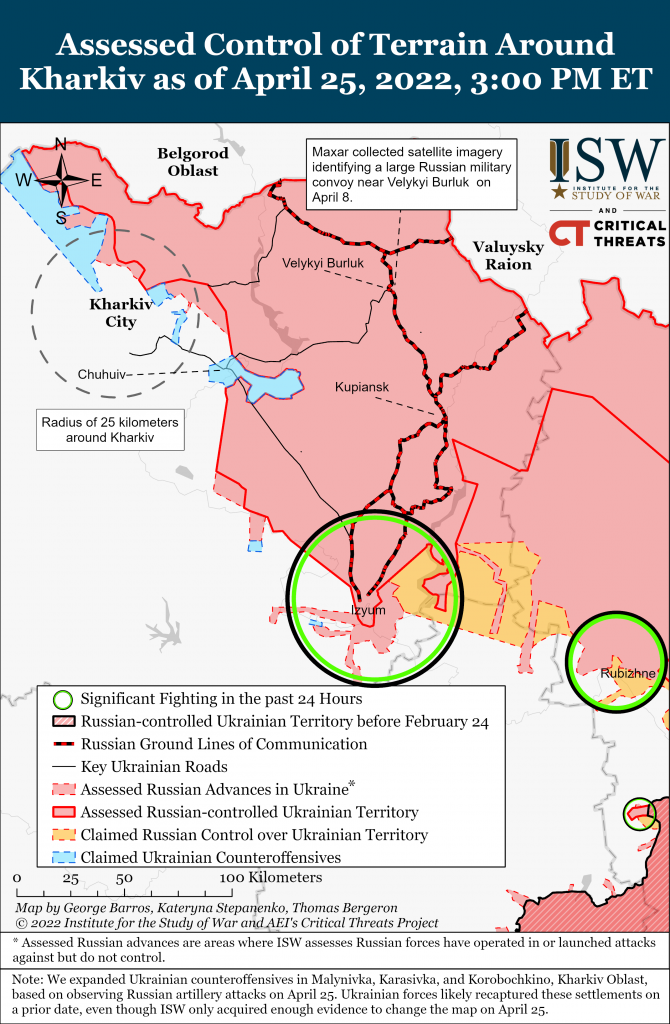 The Ukrainian General Staff reported that Russian forces are consolidating in the southern direction to conduct limited attacks west toward Mykolaiv and north toward Kryvyi Rih after conducting limited withdrawals from several forward positions in the past two days.[17] ISW could not verify Ukrainian claims to have recaptured five settlements in Mykolaiv Oblast on April 24 and eight in Kherson Oblast on April 23, though Ukrainian forces are likely conducting successful local attacks.[18] Limited Ukrainian counterattacks in the past 48 hours northwest of Kherson city likely disrupted Russian offensive preparations and forced some Russian forces to retreat to Chornobaivka on April 23.[19] Ukraine’s Operational Command “South” reported that two Russian sabotage and reconnaissance units attempted to advance toward Mykolaiv but lost half their personnel and retreated on April 24.[20] Ukrainian counterattacks continue to disrupt Russian efforts to capture the entirety of Kherson Oblast.

Russian forces likely conducted a false flag attack in Transnistria (Russia’s illegally occupied territory in Moldova), but Transnistrian forces remain unlikely to enter unsupported actions in Ukraine. The Transnistrian Internal Affairs Ministry reported that unknown forces targeted the Ministry of State Security with two grenade launchers on April 25;  Transnistrian officials stated the attack was “an attempt to sow panic and fear in Transnistria.”[21] The Ukrainian Main Intelligence Directorate (GUR) claimed the attack was organized by Russia’s FSB ”to instill panic and anti-Ukrainian sentiment” and that the FSB will carry out further provocations in Transnistria, though ISW cannot independently confirm this claim. The Kremlin (or local Transnistrian actors) may seek to depict threats to Russian speakers in Moldova to echo a common Russian talking point. The Moldovan government has not commented on the claimed attack as of publication. 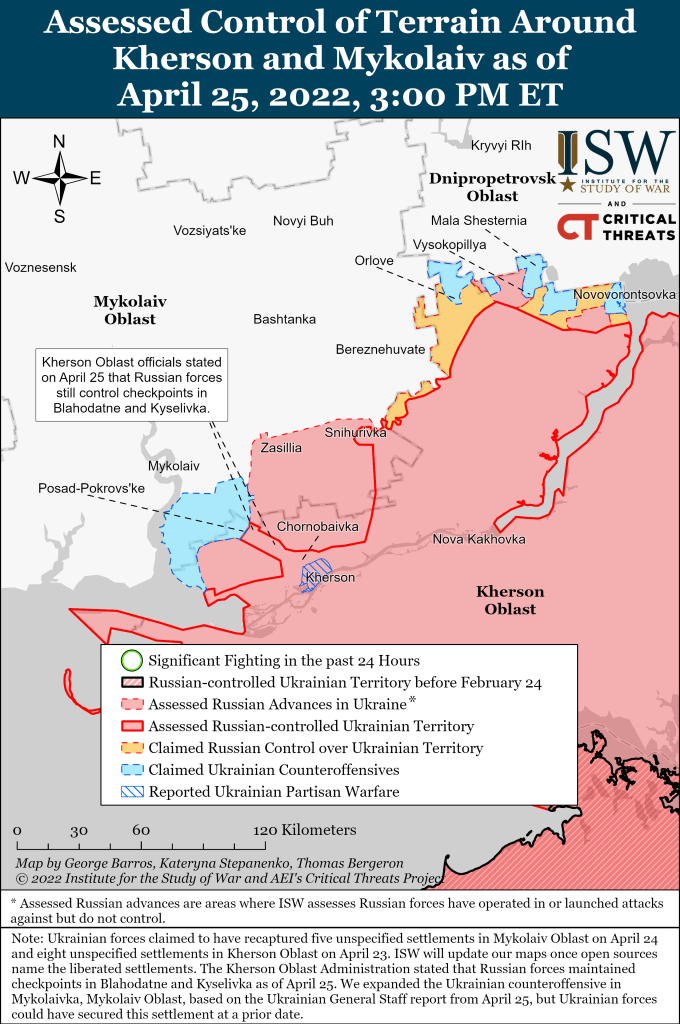