Russian forces made territorial gains in Mariupol in the past 24 hours and continued to reinforce operations along the Izyum-Slovyansk axis but did not make other territorial gains. Russian forces bisected Mariupol from the city center to the coast on April 10, isolating the remaining Ukrainian defenders in two main locations: the main port of Mariupol in the southwest and the Azovstal steel plant in the east. Russian forces, including a convoy of hundreds of vehicles captured in Maxar Technologies imagery on April 8, continue to reinforce Russia’s offensive in Izyum to link up with Russian positions in Luhansk Oblast. 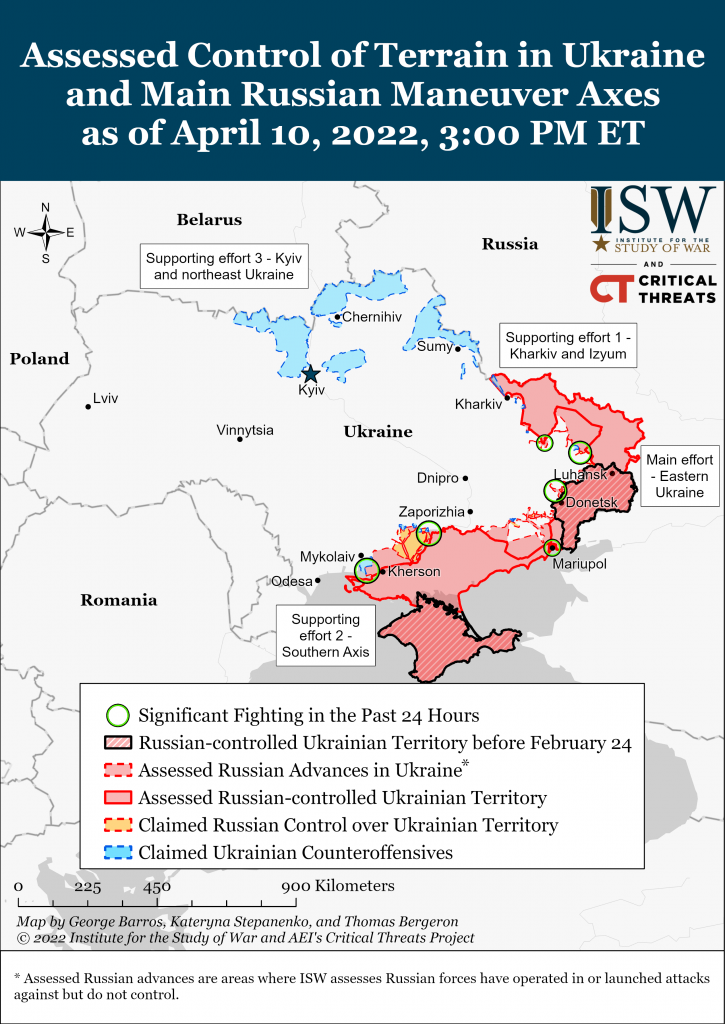 The Russian Defense Ministry is reportedly offering cash bonuses to incentivize forces withdrawn from northeastern Ukraine to reenter combat operations. Radio Svoboda published images of a document on April 10 that it reported was issued by the Russian Ministry of Defense on April 2 offering specific bonuses for Russian troops in Ukraine.[1] The document specifies large payments including 300,000 rubles for destroying a fixed-wing aircraft, 200,000 for destroying a helicopter, and 50,000 for armored vehicles and artillery. Radio Svoboda stated the payments are intended to coerce units withdrawn from the Kyiv, Chernihiv, and Sumy regions to reenter combat. We have previously reported several instances of Russian soldiers refusing orders to return to Ukraine after being pulled back.[2] 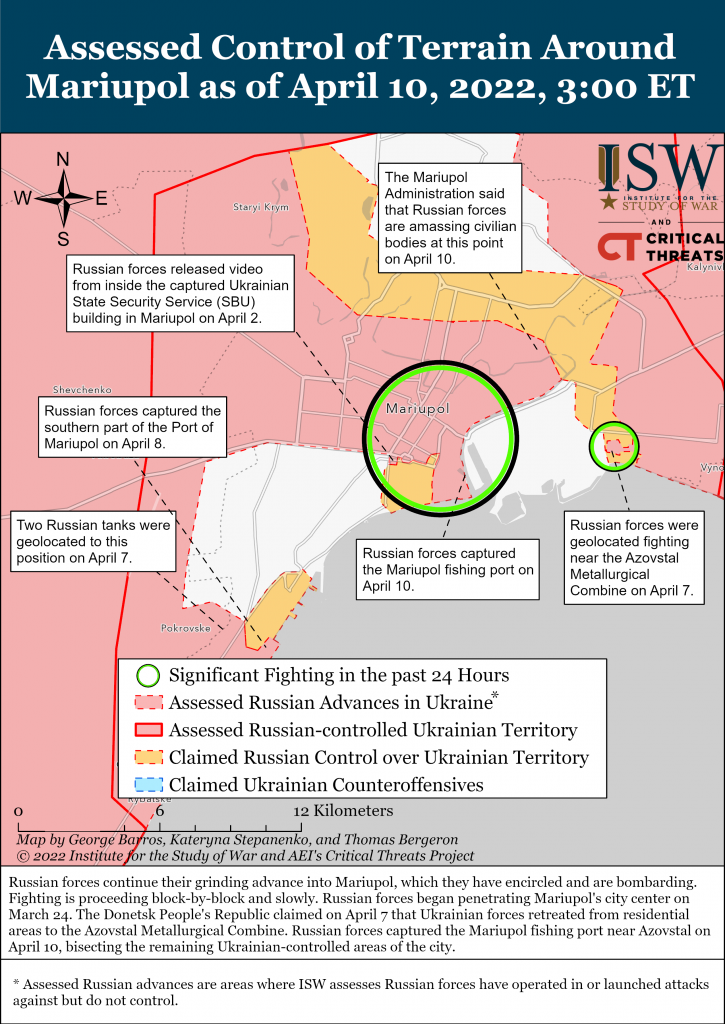 Russian forces bisected Mariupol from the city center to the coast on April 10, isolating the remaining Ukrainian defenders in two main locations—the main port of Mariupol in the southwest, and the Azovstal steel plant in the east. Several geolocated videos released by pro-Russian accounts on April 10 confirm that Russian assaults from downtown Mariupol captured the fishing port west of the Azovstal steel plant, likely confirming Russian control of the city center as well.[5] Petro Andryushenko, an advisor to Mariupol’s mayor, reported on April 10 that Russian forces are setting up checkpoints in central and northeastern Mariupol to detain or kill Ukrainian citizens that resist the Russian occupation.[6] Andryushenko additionally stated that Russian forces are building crematoria and digging mass graves for Ukrainian civilians in Mariupol, but ISW cannot independently confirm this report. Russian forces continued assaults on both pockets of Ukrainian defenders in the last 24 hours without any major gains.[7] 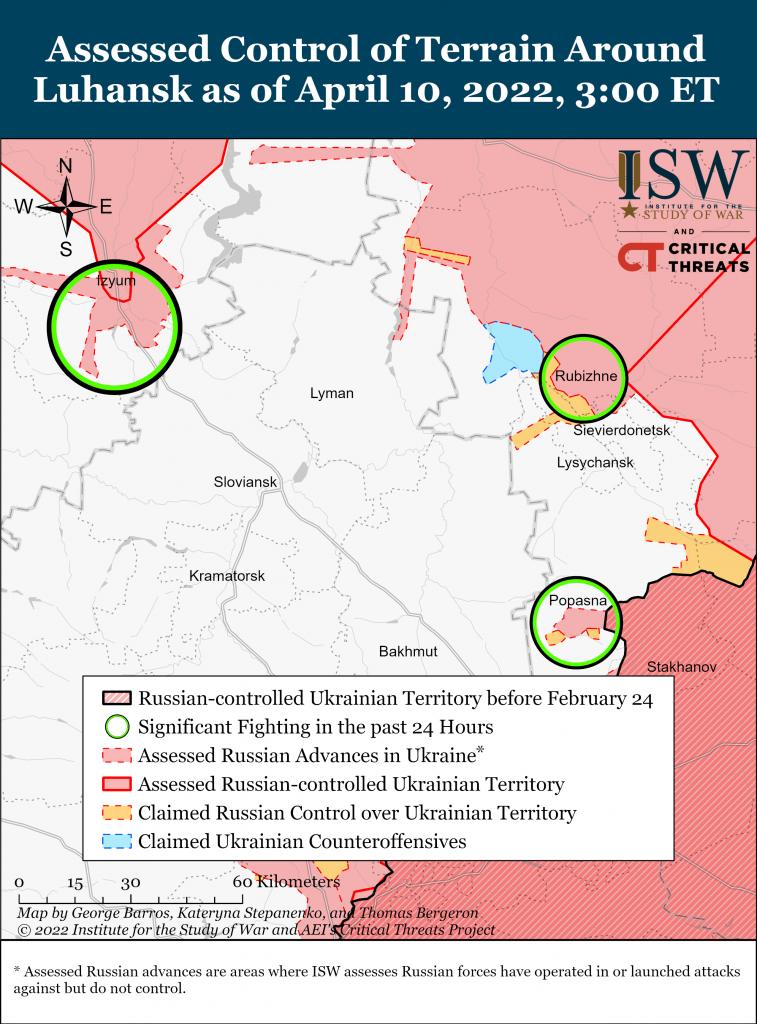 Russian forces continued assaults on Rubizhne, Popasna, and Severodonetsk in the past 24 hours but did not make significant territorial gains.[8] The Ukrainian General Staff claimed that Ukrainian forces repelled eight attacks and destroyed four tanks, eight armored vehicles, and seven unarmored vehicles in the past 24 hours.[9] Luhansk Oblast Head Serhiy Haidai stated on April 10 that approximately 60,000 Russian personnel are deployed in eastern Ukraine, but ISW cannot independently confirm this number or if it includes DNR/LNR troops.[10] Ukrainian Presidential Advisor Oleksiy Arestovych stated on April 9 that Russian forces have begun their major offensive on Donbas, which Kyiv expects to last 2-3 weeks.[11] Arestovych and other Ukrainian military forces stated that Russia is deploying additional unspecified units from the Southern Military District, undeployed Eastern Military District units, and forces withdrawn from northeastern Ukraine, though none of these forces have arrived in Donbas as of April 10.[12]

Russian forces continue to redeploy to the Kharkiv area to support the ongoing Russian offensive south of Izyum toward Slovyansk and Barvinkove. Maxar Technologies satellite imagery (see below) captured a convoy of hundreds of vehicles (including armored vehicles, towed artillery, and support equipment) extending at least eight miles moving south through Vleykyi Burluk, approximately 100km north of Izyum and 90km east of Kharkiv, on April 8. The Ukrainian General Staff reported on April 10 that Central and Eastern Military District units continued to arrive in Russia’s Belgorod, Voronezh, and Kursk oblasts for further deployment to the Izyum front.[13] Russian forces likely repaired the main bridge in Izyum on April 10, supplementing their previously established pontoon bridge.[14] A pro-Russian Telegram channel depicted T-80 tanks from the 4th Guards Tank Division (which previously redeployed from the Sumy axis) at an unspecified location in Kharkiv Oblast on April 9.[15] These forces are likely deploying to support ongoing Russian operations near Izyum, which have not taken any territory in the last 48 hours.[16] 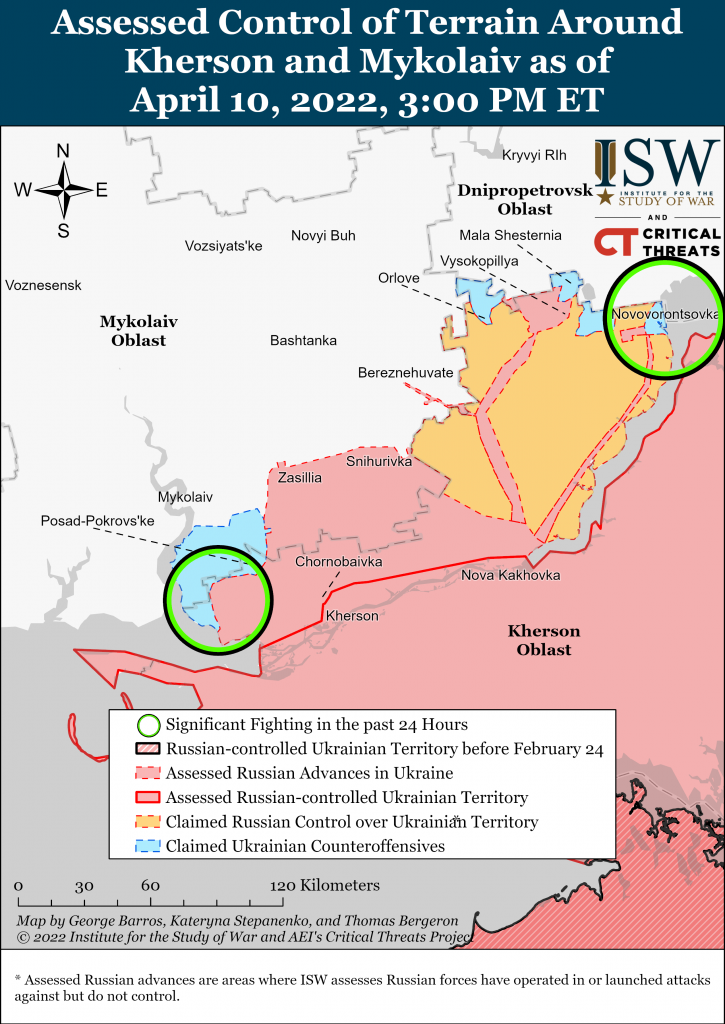 Russian forces launched unsuccessful counterattacks against recent Ukrainian gains in Osokorkivka (north of Kherson) and Oleksandrivka (35km west of Kherson city) on April 10.[17] Ukrainian forces claimed to strike (unclear if with airstrikes or artillery) a Russian airfield and command post in Melitopol on April 10.[18] Ukrainian counterattacks continue to put Russian forces on the defensive, and Ukrainian troops may attempt larger-scale attacks toward Kherson city itself in the coming weeks.

There was no significant activity reported on this axis in the past 24 hours.