ISW assesses that the Kremlin has revised its campaign plan in Ukraine after the failure of its initial campaign to capture Kyiv and other major Ukrainian cities and its subsequent failure to adjust its operations in late March. ISW previously assessed that the initial Russian campaign of the war—airborne and mechanized operations to seize Kyiv, Kharkiv, Odesa, and other major Ukrainian cities to force a change of government in Ukraine—had failed as of March 19.[1] The Russian military continued to feed small collections of reinforcements into operations around Kyiv and across northeastern and southern Ukraine in an effort to keep its initial campaign plan alive throughout late March. We assess that the Russian military has now halted these failed efforts and is beginning a new phase of its campaign in Ukraine with new objectives. We are updating the structure of our campaign assessments to reflect the new structure and prioritization of Russian operations.

Russia’s main effort is now focused on eastern Ukraine, with two subordinate main efforts: capturing the port city of Mariupol and capturing the entirety of Donetsk and Luhansk Oblasts. The Kremlin claims the entirety of these oblasts as the territory of its proxies in eastern Ukraine, the Donetsk and Luhansk People’s Republics (DNR and LNR).[2] The Kremlin is increasingly redeploying troops from other axes of advance and channeling its remaining reinforcements from Russia into eastern Ukraine. Russian forces are unlikely to conduct active operations on other fronts in the coming weeks.

The Kremlin may intend to capture Donetsk and Luhansk Oblasts before seeking to negotiate a Kremlin-favorable ceasefire and claim that Russia has achieved its war aims. The Kremlin’s initial false justification for its unprovoked invasion of Ukraine was to protect the DNR and LNR from Ukraine and enable them to seize their “claimed” territory. The Kremlin is attempting to gloss over the failure of Russia’s initial campaign for a domestic Russian audience. The Kremlin has in fact been forced to alter its operations after the failure of its initial campaign. Kremlin claims that Russian forces solely attacked northeastern Ukraine to degrade Ukrainian forces before achieving the “main goal” of capturing Donetsk and Luhansk Oblasts – such as statements made by the Russian General Staff on March 25 – are false.[3]

Russian forces have three supporting efforts: Kharkiv and Izyum; Kyiv and northeastern Ukraine; and the southern axis, including Kherson. 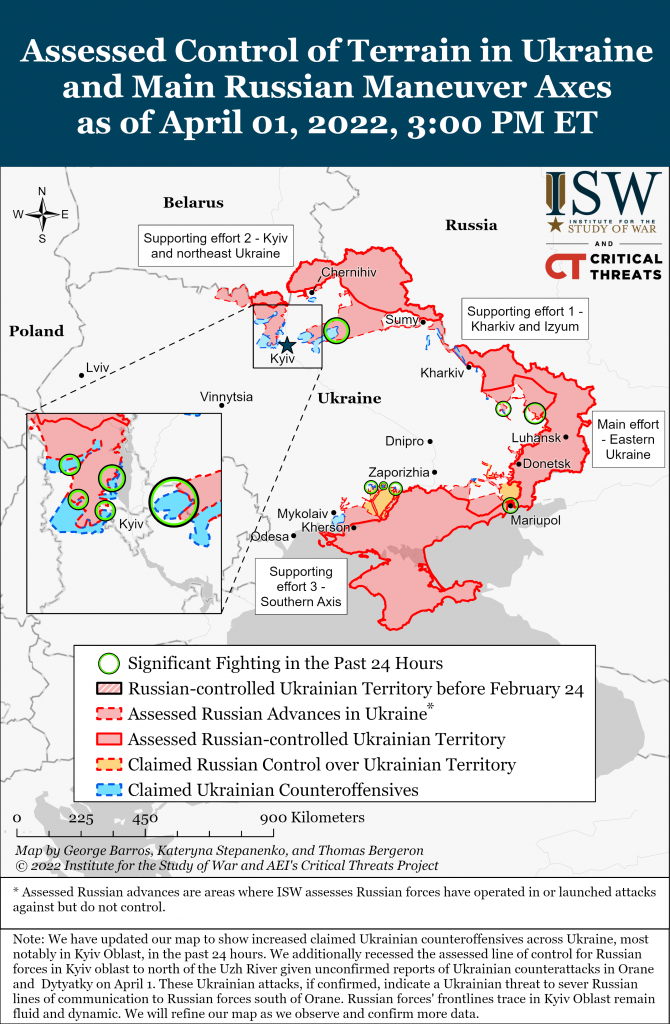 Russian forces continued to advance in central Mariupol on April 1.[5] The Ukrainian General Staff reported at midnight local time on March 31 that Ukraine’s 36th Marine Brigade and other units are maintaining the “circular defense” of Mariupol, but Russian forces continue to take territory.[6] DNR officials shared footage on March 31 that they claimed showed a Ukrainian base in central Mariupol captured by Russian and DNR forces, though ISW cannot independently confirm this claim.[7] Russian forces likely intend to capture Mariupol before advancing northwest to support ongoing operations to capture the entirety of Donetsk Oblast. However, Russian forces fighting in Mariupol are likely suffering high casualties and will likely be unable to support further offensive operations after capturing the city. 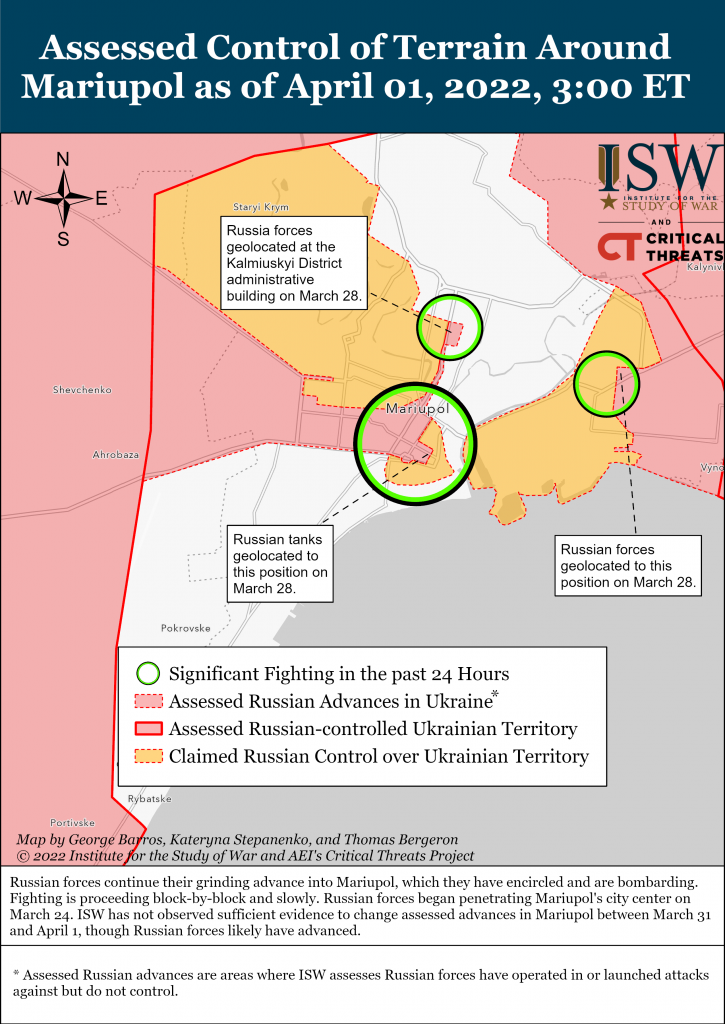 Ukrainian forces continued to repel Russian assaults in Donetsk and Luhansk Oblasts on April 1. The Ukrainian General Staff reported at 6:00 am local time on April 1 that Ukrainian forces repelled seven Russian attacks in the past 24 hours, destroying three tanks, two armored personnel carriers, and two unarmored vehicles; Ukrainian forces also shot down an Orlan-10 UAV.[8] Russian offensive operations in Luhansk Oblast are centered on Popasna and Rubizhne, and operations in Donetsk Oblast are concentrated on Marinka.[9] Russian assaults in the Donbas region have not made meaningful territorial gains since March 24.[10] The Kremlin will continue to funnel reinforcements (including both low-quality individual replacements from Russia and damaged units redeployed from northeastern Ukraine) into this main effort, but these degraded forces are unlikely to enable Russia to conduct successful large-scale offensive operations

The Ukrainian General Staff reported at midnight local time on March 31 that Russian personnel from Russia’s 7th Military Base in Abkhazia reinforced elements of the 58th Combined Arms Army operating in Donbas.[11] ISW previously reported on March 30 that Russia deployed forces from Abkhazia and South Ossetia to Ukraine but could not confirm their specific places of deployment at the time.[12] 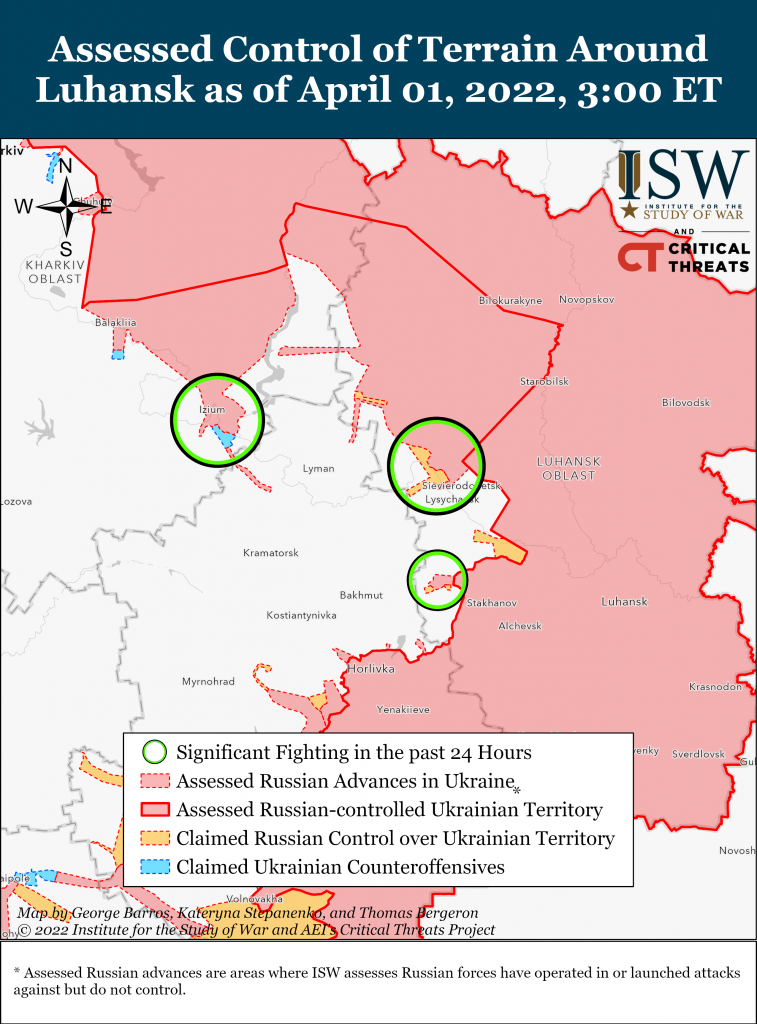 Russian forces captured Izyum on April 1 and will likely seek to advance southeast to link up with Russian forces in Luhansk Oblast in the coming days. The Ukrainian General Staff and local sources confirmed that Russian forces fully captured the city and expelled Ukrainian forces from their defensive positions.[13] Ukrainian forces successfully defended the city against Russian attacks from March 7 to March 31, delaying Russian operations and preventing the encirclement of Kharkiv.[14] Russian forces, reinforced with elements of the 20th Combined Arms Army and 1st Guards Tank Army redeployed from the Sumy region, will likely launch further operations to drive southeast and link up with stalled Russian frontal assaults in Luhansk Oblast.[15]

Russian forces around Kharkiv continued to shell the outskirts of the city and likely seek to pin in place Ukrainian forces in the city. The Ukrainian General Staff and local Kharkiv authorities reported continued Russian shelling and stated that Russia is delivering additional artillery ammunition to its forces around the city.[16] Russian forces have abandoned operations to encircle and capture Kharkiv. Russian forces will likely continue to shell the city and seek to fix in place Ukrainian mechanized units in order to prevent them from reinforcing Ukrainian defenses in the Donbas or conducting counterattacks elsewhere.

The Ukrainian General Staff stated at midnight local time on March 31 that Russia has withdrawn up to five battalion tactical groups (BTGs) from around Kyiv into Belarus for refit and redeployment to other axes of advance.[17] The Ukrainian General Staff stated that Russian forces mined vacated terrain and used artillery to screen their movements and did not claim that Russian forces collapsed or routed.[18] Russian forces withdrawn into Belarus are likely heavily degraded and are unlikely to provide meaningful combat power in the near term, despite the successful withdrawal of some portion of damaged Russian units.

Ukrainian forces conducted similarly successful counterattacks east of Kyiv on April 1. Ukrainian forces likely broke the encirclement of Chernihiv and pushed Russian forces east from Brovary and captured Nova Basan, nearly to the Supiy River.[20] The governor of Chernihiv Oblast reported on April 1 that Russian forces are withdrawing from the region for likely redeployment elsewhere.[21] The Ukrainian General Staff reported at midnight local time on March 31 that elements of Russia’s 1st Guards Tank Army are screening withdrawals from the Chernihiv axis by other unspecified Russian units.[22] 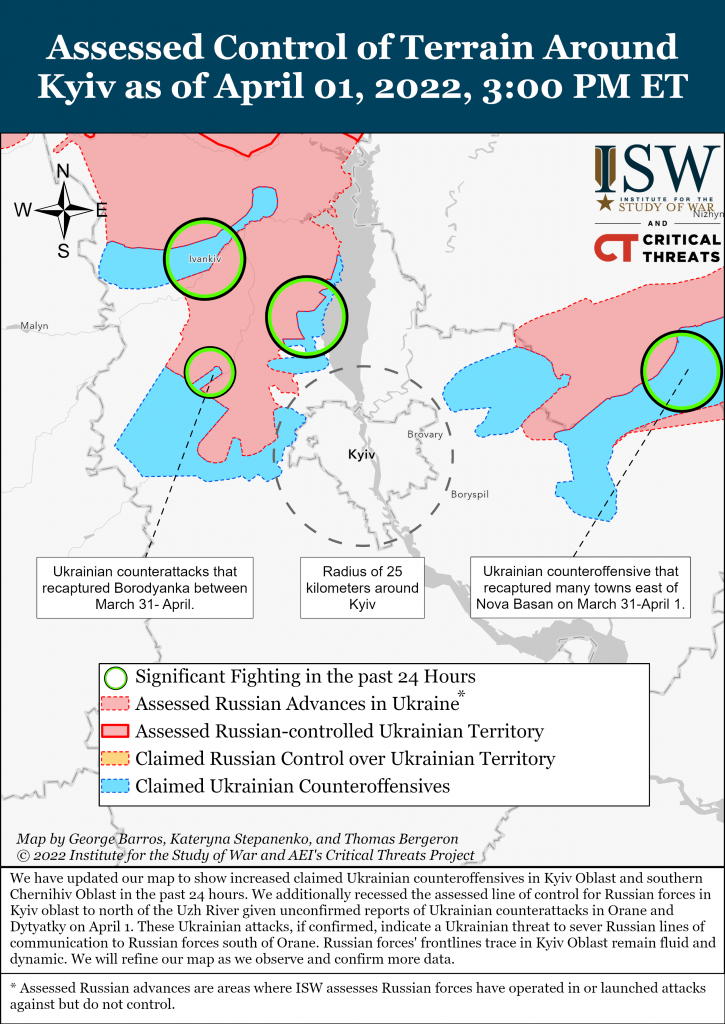