Ongoing gas shortages have sparked protests in northeastern Iran. Protesters gathered in front of the local governor’s office and lit a fire in the streets in Torbat-e Jam, Khorasan Razavi Province on January 16.[i] Protesters were responding to the Iranian regime cutting gas services for thousands of customers in the city in recent days. Citizens have struggled to keep warm in the winter conditions. Some locals have claimed that the regime has cut electricity to the city as well.[ii] These energy shortages could stoke further protests throughout Iran, especially in its northern and eastern provinces in the coming days. Iranian officials have increasingly warned of a national “gas crisis” in recent days and briefly closed banks, public facilities, and universities in some provinces to reduce gas consumption.[iii]

The regime could escalate significantly against protesters in Torbat-e Jam if the demonstrations expand meaningfully. The Artesh Ground Forces 38th Mohammad Rasoul Ollah Armored Brigade is headquartered in the city. The regime is likely particularly sensitive to instability in this location because of this armored division, upon which the regime relies in its efforts to secure the Iran-Afghanistan border.

Protest organizers seemingly failed to generate pro-Pahlavi demonstrations on January 16. The Iranian Neighborhood United Front released a statement with another group named the Voice of the People Coalition calling for such demonstrations to commemorate the anniversary of the Shah leaving Iran in 1979.[iv] CTP recorded no significant uptick in protest activity on January 16. The protests that did occur seemed related to domestic issues, such as gas shortages and political suppression, rather than about the Shah leaving Iran. 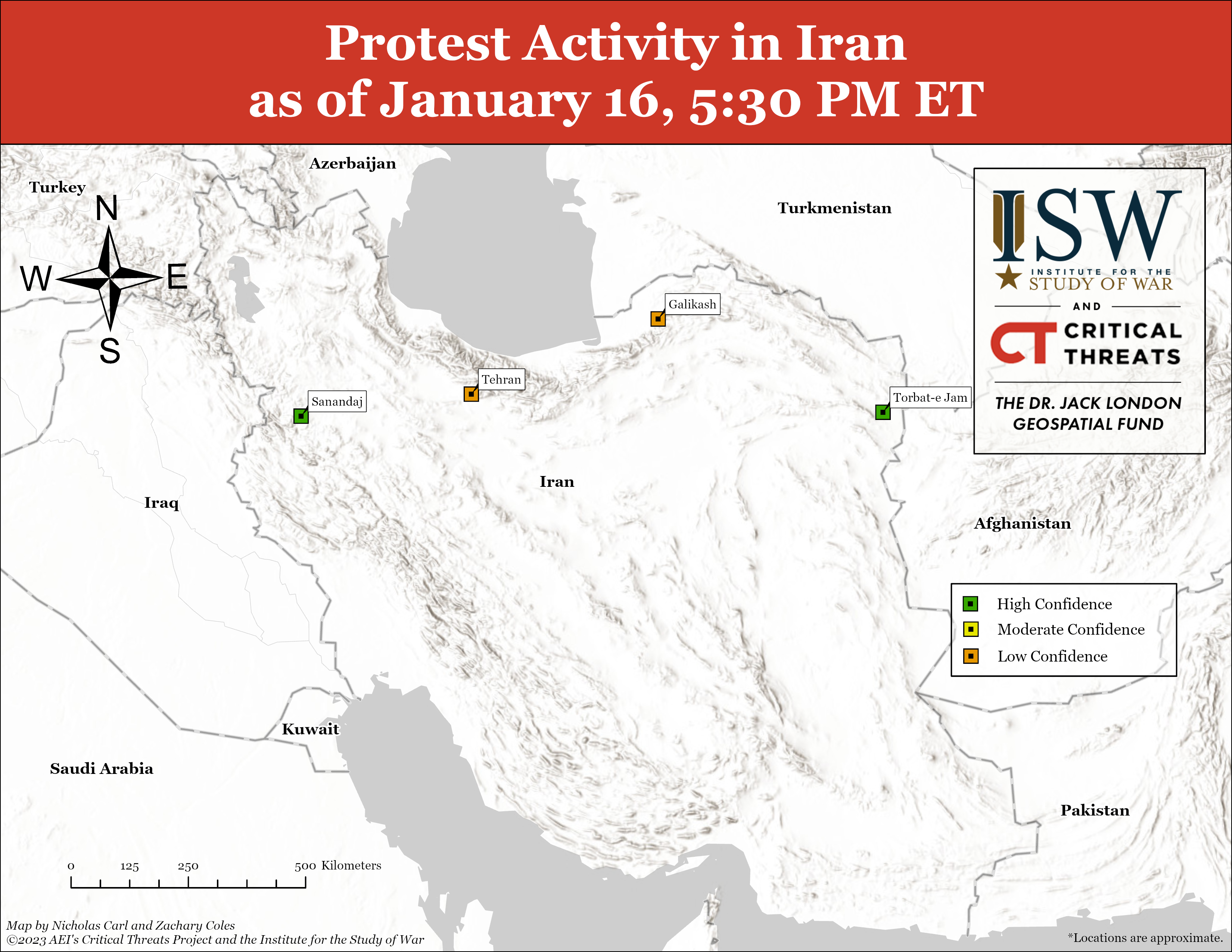 The Defense and Armed Forces Logistics Ministry released a statement on January 16 denying that executed British-Iranian dual national Alireza Akbari served as deputy defense minister.[xi] The judiciary announced Akbari’s execution on January 14 after sentencing him to death on espionage charges.[xii] The defense ministry statement alleged that Akbari only served as Defense Studies Department director in the ministry. This statement contradicts reports from Iranian state media that have explicitly labeled Akbari as the deputy defense minister for foreign relations.[xiii] The defense ministry is likely trying to downplay the significance of a former senior official being an alleged foreign agent. The defense ministry may be also trying to politically distance itself from association with Akbari. The Supreme National Security Council and its secretary, Ali Shamkhani, have also sought to distance themselves in recent days.[xiv]

IRGC Deputy Commander Brigadier General Ali Fadavi stated on January 16 that 60 security officers have died and over 5,000 were injured in the protests.[xv] Independent open-source analysts have assessed that closer to 73 officers have died since September 2022—the most that have died in a single Iranian protest wave since the revolution in 1979.[xvi]

IRGC Quds Force Commander Brigadier General Esmail Ghaani traveled to Baghdad to meet with senior Iraqi officials on January 16.[xvii] Ghaani’s visit comes one day after Iraqi Prime Minister Mohammed al Sudani advocated for the continued presence of US troops in Iraq in an interview with the Wall Street Journal.[xviii]