The Iranian judiciary announced on January 14 the execution of Alireza Akbari—a former deputy defense minister and British-Iranian dual national.[i] The judiciary previously announced on January 11 that it had sentenced Akbari to death for espionage charges.[ii] Iranian officials and media have accused Akbari of providing information to British intelligence services. CTP has previously assessed that some elements of the security establishment are coopting Akbari’s case to force Ali Shamkhani from his position as Supreme National Security Council (SNSC) secretary.[iii] CTP is not prepared to assess the likelihood of Shamkhani’s departure, however.

The potential replacement of Shamkhani could have profound implications for the development and implementation of Iranian security policy domestically and abroad. The SNSC is the highest defense and foreign policy body within the regime. The council, under Khamenei, also dictates and oversees all efforts to quash protests. Its members are senior Iranian political and security figures, including the president, parliament speaker, judiciary chief, and the commanding officers responsible for the Armed Forces General Staff, Islamic Revolutionary Guards Corps (IRGC), Artesh, and Law Enforcement Command (LEC). The supreme leader sends personal representatives to the council on his behalf to articulate his parameters and preferences. Shamkhani dual hats as the SNSC secretary and one of Khamenei’s two representatives to the council. Then-President Hassan Rouhani appointed Shamkhani as SNSC secretary in 2013.

Some protest organizers have called for pro-Pahlavi demonstrations on January 16 to commemorate the anniversary of the Shah leaving Iran in 1979. The Iranian Neighborhood United Front released a statement with another group named the Voice of the People Coalition calling for such demonstrations.[iv] CTP has no assessment of the degree to which this pro-Pahlavi sentiment represents any part of the protest movement. The Iranian Neighborhood Youth Union—the other major umbrella organization for protest groups—has not acknowledged these calls for demonstrations at the time of this writing. 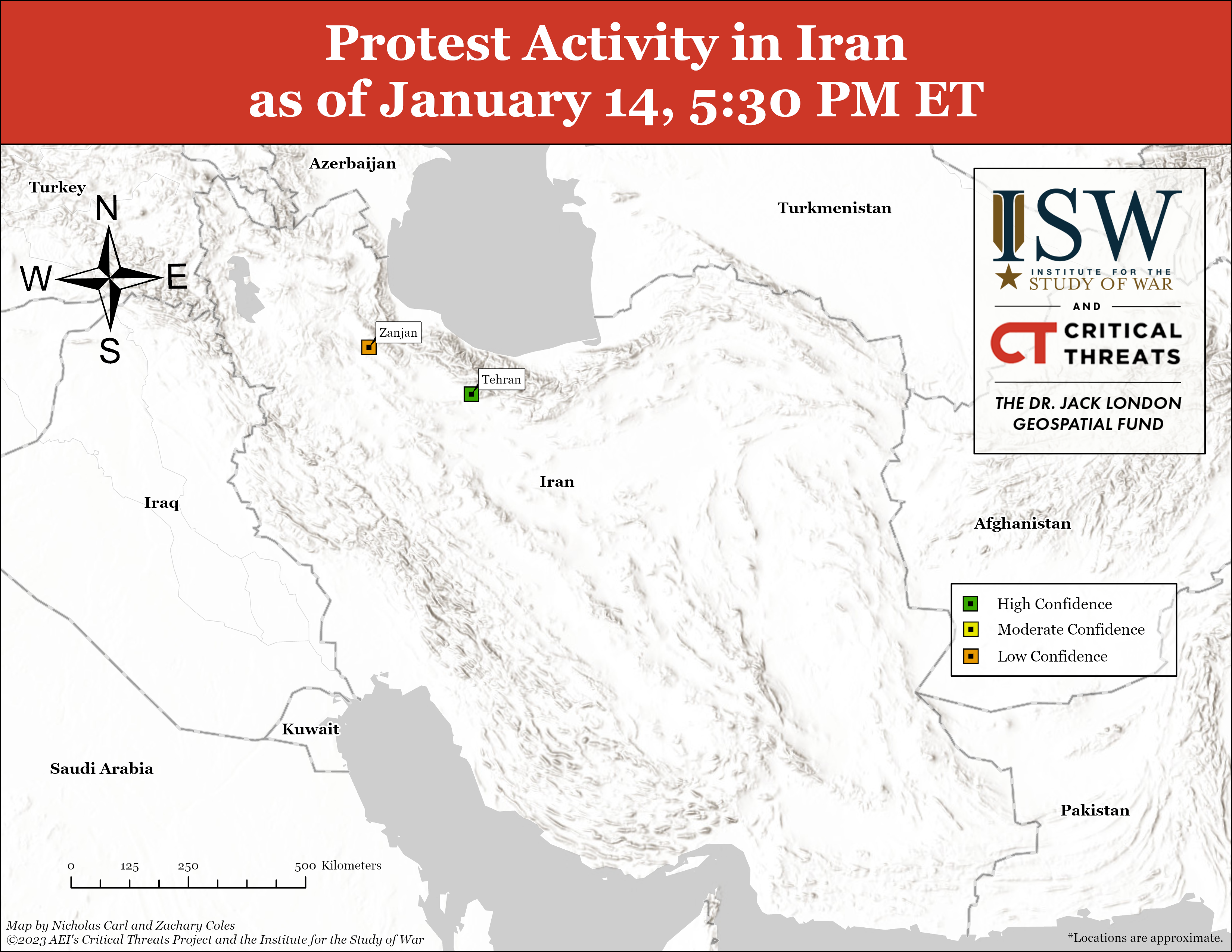 An LEC officer died in a hospital on January 14 due to injuries he sustained in a clash with armed smugglers in Markazi Province days prior.[viii]

The Mashhad Neighborhood Youth urged protesters on January 14 to conduct “sabotage operations” against the regime.[ix] The Mashhad group encouraged protesters to set banks and government buildings on fire.[x]

President Ebrahim Raisi met with Law Enforcement Commander Brigadier General Ahmad Reza Radan on January 14.[xi] Raisi emphasized the readiness of his administration to support the LEC. Radan presented a report to Raisi on the current condition and objectives of the LEC. Radan is a hardline member of the IRGC and has extensive experience crushing political dissent and protests. CTP has previously assessed that Radan will likely adopt a hardline on enforcing the mandatory hijab law.[xii]