Some protest organizers in Iran are trying to push the protest movement into a new phase—one that could include more militant activity against the Iranian regime. The Karaj Neighborhood Youth has argued in recent days that the movement has entered a “new phase” and “second wave” as protest turnout has continued to decline.[1] The Karaj group has described this new period as featuring greater centralization and cohesion within the movement, external outreach, and insurgent activity. The Karaj group stated on January 4 that the movement has “intensified” its coordination and is making unified decisions regarding “approaches, fighting methods, assistance, etc.”[2] The Karaj group rebranded entirely on January 13, labeling itself as the international communications wing of the Iranian Neighborhood Youth Union (INYU)—a coalition of protest groups that formed in December 2022.[3] The Karaj group under its new name announced that that the INYU is pursuing two efforts: “1. Building cohesion and cooperation among militant groups inside Iran [and] 2. connecting with the international community (individuals, organizations, media).”[4] The group added that the first effort "is currently underway, and soon most militant groups in the field will gather together.” It is unclear how much real influence the INYU has over the protest movement and to what extent its efforts will succeed, especially given the challenges that it has had in generating protest turnout previously.[5] Infighting over leadership within the protest movement could seriously hinder these efforts. It is also unclear to what extent the INYU will continue trying to coordinate overt acts of political defiance, such as demonstrations and strikes.

The rhetoric from the Karaj group highlights the long-term challenge that the regime may face vis-a-vis this movement even if daily protests subside. Even limited success organizing anti-regime militancy will strain the state security apparatus. The regime already faces long-existing insurgencies in the southwestern, southeastern, and northwestern provinces of the country. Iranian Arab, Baloch, and Kurdish militants have leveraged economic and political frustrations among marginalized minorities in the border regions to fuel these groups’ anti-regime agendas for decades. These groups, which include the Kurdistan Free Life Party and Jaish al Adl, have historically conducted attacks into Iran and clash with security forces regularly in the border regions, where they are based. Increasing militant attacks against the regime would compound this pressure.

Protest activity increased on January 13, primarily in Sistan and Baluchistan Province, after a two-day period of no recorded protests in Iran. This uptick in protests is unsurprising given that CTP has recorded increased protests in Sistan and Baluchistan Province every Friday for several months.[6] Prominent Sunni cleric Moulana Abdol Hamid continues to use his weekly Friday sermons to inspire protests criticizing regime discrimination against Baloch and Sunni citizens. He criticized Supreme Leader Ali Khamenei directly in his speech on January 13, stating that dialogue with poets and religious speakers will not solve the country's problems.[7] Abdol Hamid was likely referencing Khamenei’s meeting with eulogists and poets on January 12.[8] 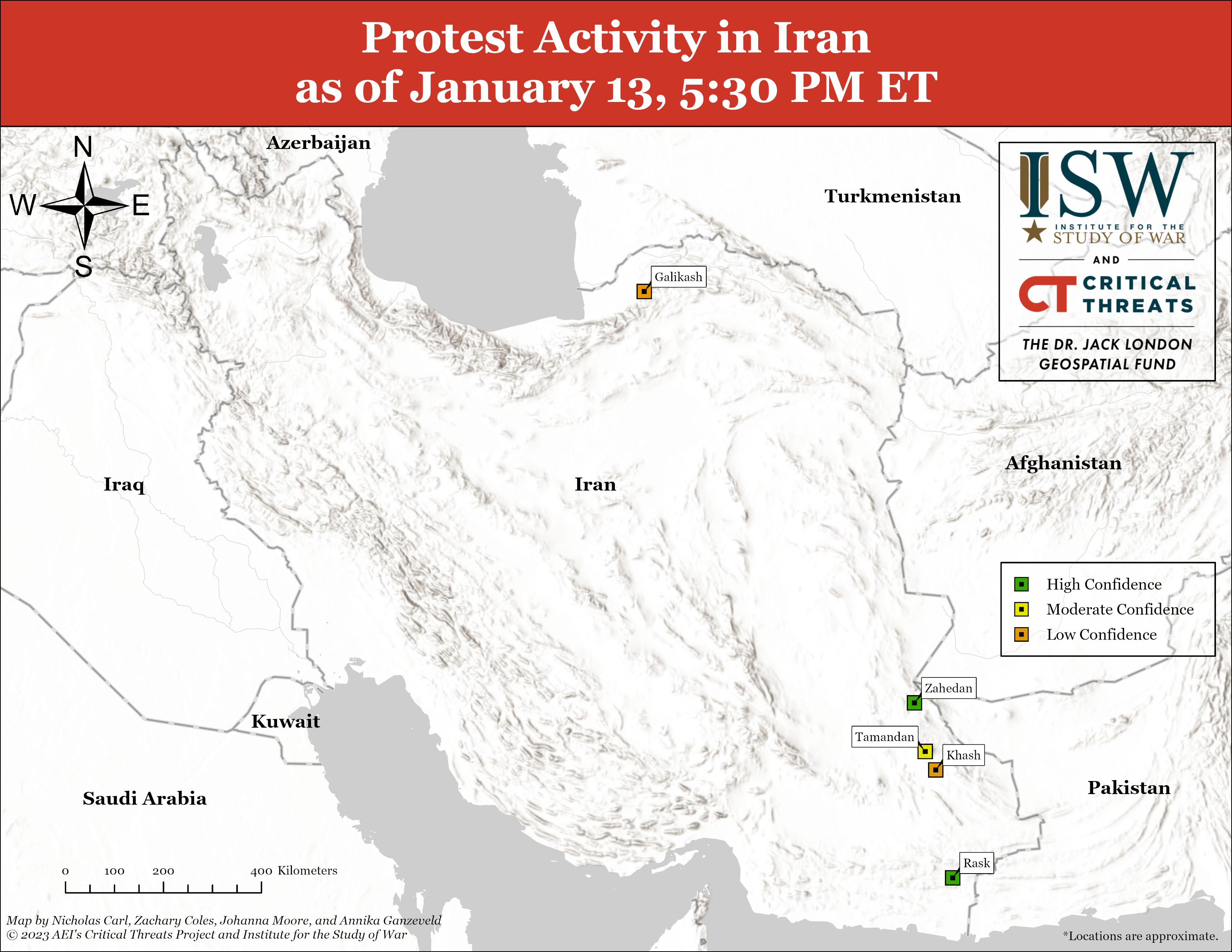 Nour News Agency published an article on January 13 denying speculation that Ali Shamkhani will leave his position as Supreme National Security Council (SNSC) secretary.[15] Nour News Agency is affiliated with the SNSC and Shamkhani. The media outlet previously published an article on January 12 claiming that some officials are using the arrest and sentencing of Alireza Akbari—a former deputy defense minister and British-Iranian dual national—to force Shamkhani from his position.[16] Akbar was a deputy to Shamkhani when the latter was defense minister from 1997 to 2005.

President Ebrahim Raisi argued on January 13 that women who do not fully wear the hijab could still support the regime and revolution.[17] Raisi was repeating the same argument that Supreme Leader Ali Khamenei has made in recent months. Khamenei has continually affirmed his support for the hijab requirement but argued that women who only partially veil still support the political establishment.[18] Khamenei has essentially announced that the regime should continue to enforce the mandatory hijab law but tolerate women who do not fully comply.

The regime is temporarily closing various public facilities in some provinces to reduce natural gas consumption. Officials have announced closures to municipal administrative buildings, schools, universities, and other various public facilities in provinces including Tehran, East Azerbaijan, and North Khorasan.[19] The Iranian National Gas Company has stated that Iran is facing a “gas crisis.” Cold weather patterns persisting in several provinces in the days ahead could further stress gas supplies.[20]

Possible Iranian-backed militants fired a single rocket at the Khor Mor gas field in Sulaymaniyah Province, Iraqi Kurdistan.[21] The Khor Mor is one of the two largest gas fields in Iraq and is primarily operated by Emirati energy companies Dana Gas and Crescent Petroleum. Iranian proxies previously targeted the gas field on October 12 and several separate occasions in June and July 2022.[22]