The Iranian regime is refocusing on enforcing widespread adherence to the mandatory hijab law after briefly and informally relaxing such restrictions in previous months. Women in Iran have increasingly gone out in public without a hijab in recent months, according to some media reports.[i] But the regime has taken several actions in recent days indicating preparations to resume mass enforcement. Iranian state media reported on January 10 that Prosecutor General Mohammad Jafar Montazeri has ordered the Law Enforcement Command (LEC) to impose the hijab requirement “decisively.”[ii] Supreme Leader Ali Khamenei appointed Brigadier General Ahmad Reza Radan—an architect of the morality patrol—as the new law enforcement commander on January 7.[iii] The LEC resumed using surveillance cameras to identify women not properly adhering to the hijab requirement in their cars on January 2 as well.[iv] Regime officials may see an opportunity to again enforce the hijab requirement as protest turnout has decreased in recent weeks and security personnel have likely regained some bandwidth. Iranian authorities may be particularly eager to resume widespread adherence to the mandatory hijab law to promote to the public the impression that the unrest has receded.

The Sari Revolutionary Court sentenced protester Javad Rouhi to death on January 10.[v] The court convicted Rouhi of “corruption on Earth” and “waging war against God.” The Iranian Supreme Court can appeal these sentences. 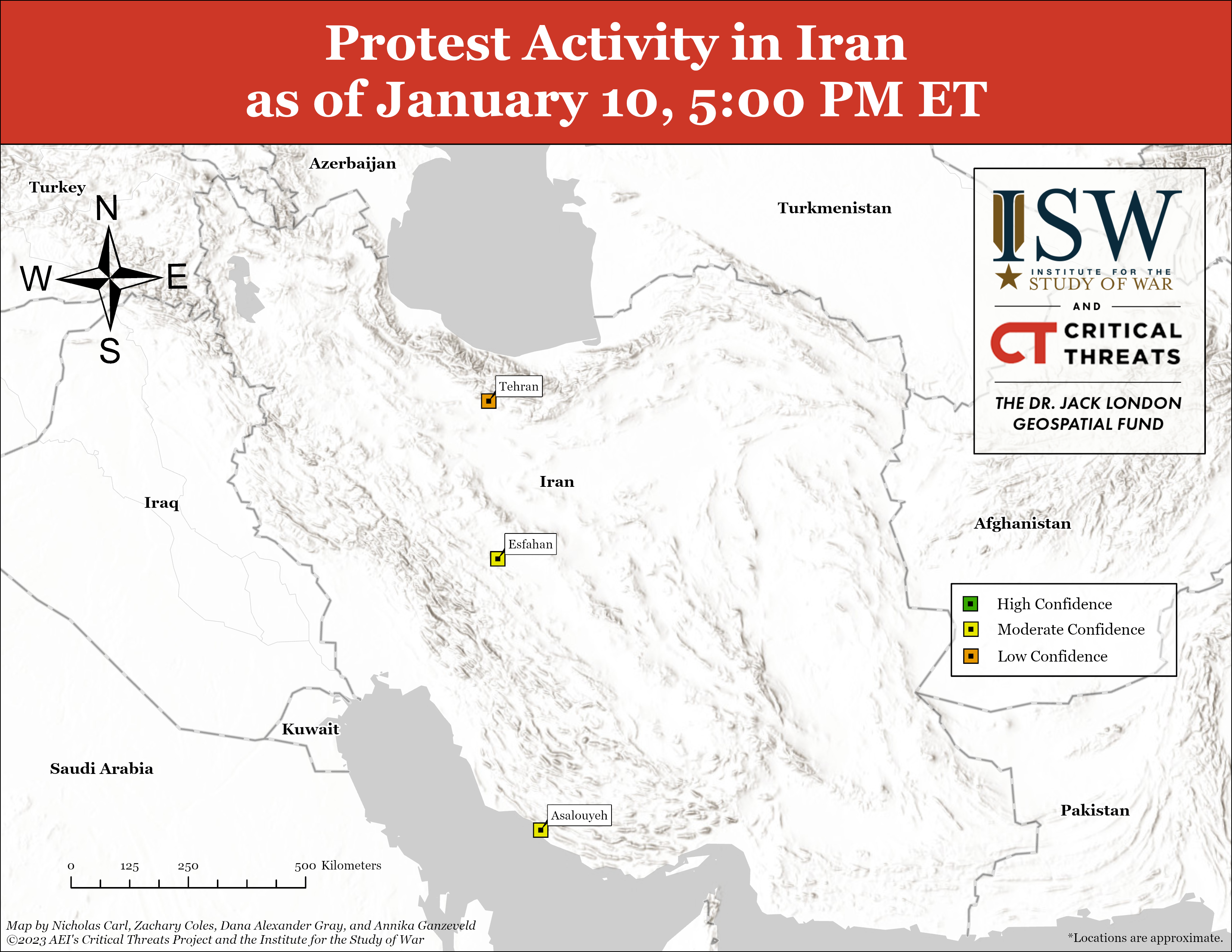 Social media accounts have claimed in recent days that the regime has arrested and sentenced an unidentified former senior official on espionage charges.[x] Some social media accounts claimed that the official may be former deputy defense minister Alireza Akbari, who served in the reformist Khatami administration.[xi] Akbari is reportedly close to Supreme National Security Council Secretary Ali Shamkhani and former Parliament Speaker Ali Larijani.[xii] Unidentified sources told UK-based Amwaj Media that the regime actors responsible for the arrest and sentencing may have sought to politically damage Shamkhani or Larijani.[xiii] Other sources noted to Amwaj Media that the regime arrested Akbari several years ago and suggested that the more recent arrest is related to a different former official.[xiv]

The Parliamentary Legal and Judicial Committee reviewed and approved articles of the draft legislation to establish a police force for adolescents and children on January 10.[xv] Hossein Ali Hajji Deligan—a lawmaker on the committee—stated that the regime plans to establish a database to track minors who commit “violations.” Establishing a police force dedicated to adolescents and children will likely take the regime several months and may suggest that some officials view the protests among Iranian youth as a long-term threat. Some human rights activists have estimated that security forces have killed around 70 minors since the protests began in September 2022.[xvi]

Parliament Speaker Mohammad Bagher Ghalibaf announced that the regime has resolved its “misunderstandings” with Azerbaijan on January 10.[xix] Ghalibaf paid an official visit to Turkey in recent days and met with Azerbaijani officials. Tensions between Tehran and Baku have mounted in recent months as Iranian officials have accused Azerbaijan of hosting Israeli intelligence agents, as CTP has previously reported.[xx]

A fire at a pharmaceutical factory in Qazvin Province killed four and injured three on January 10.[xxi]