A U.S. airstrike killed a senior al Qaeda in the Arabian Peninsula (AQAP) military official, which will probably disrupt operations in the coming weeks, but is unlikely to roll back AQAP's gains in southern Yemen. 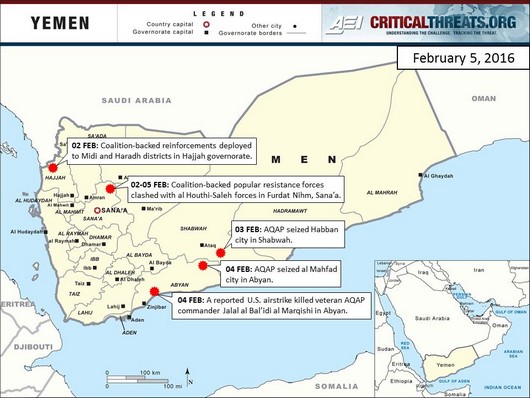 A U.S. airstrike killed a senior al Qaeda in the Arabian Peninsula (AQAP) military official, which will probably disrupt operations in the coming weeks, but is unlikely to roll back AQAP's gains in southern Yemen.

A U.S. airstrike killed veteran AQAP military commander Jalal al Bal’idi al Marqishi, according to reports. The airstrike targeted Marqishi, who likely headed AQAP's Ansar al Shari'a, while he was traveling by car in Abyan on February 4. Marqishi, who survived a similar airstrike in December 2015, is the most senior known AQAP operative killed since the death of the late emir, Nasser al Wahayshi, in June 2015. A second airstrike killed six AQAP militants in al Rawdah, Shabwah, just south of the governorate's capital, Ataq, on February 4. Among the killed was Dhafir al Shifri, one of AQAP’s regional commanders.

AQAP is consolidating control along a primary road that runs from Abyan through Shabwah and into Hadramawt. AQAP militants took control of two towns along the road: Habban, in Shabwah, on February 3 and al Mahfad, in northeast Abyan, on February 4. AQAP is likely treating this road as a primary ground line of communication to move personnel and resources across the Yemeni battlefield, as indicated by the two airstrikes targeting militants. AQAP also erected checkpoints in al Hawta in Lahij on February 4, further consolidating control over the city.

The Islamic State of Iraq and al Sham (ISIS) in Yemen’s Wilayat Hadramawt released a video of executions and operations in Hadramawt. The February 3 video showed the execution of four Yemeni soldiers and the killing of an “Awakening” fighter in a marketplace, as well as operations against military forces aligned with Yemeni President Abdu Rabbu Mansour al Hadi along the Saudi-Yemeni border. (Video available by subscription through SITE.) ISIS in Yemen has resumed activity in Yemen following a pause in operations most likely resulting from a well-publicized division among its members. ISIS will likely continue its campaign to weaken the Hadi government in its de facto capital of Aden. (Note: This paragraph was edited on February 10 after new information was discovered on the video's filming location.)

Coalition-backed forces remain concentrated along the anti-al Houthi-Saleh frontlines. The Saudi-led coalition sent reinforcements to Hajjah in northwestern Yemen on February 2, possibly to assist the Saudi border guard in clearing operations. Coalition-backed forces, assisted by airstrikes, are fighting for control of Furdat Nihm, a district 50 kilometers northeast of Sana’a that serves as a crucial staging point for al Houthi attacks against coalition-backed forces in northeast Yemen. The seizure of Furdat Nihm would give the coalition and popular resistance control of a major roads juncture with routes leading into al Jawf, Sa’ada, and Ma’rib. The coalition will continue to prioritize combating the al Houthi-Saleh movement over confronting AQAP.

AQAP will continue to expand away from Yemen’s frontlines in the absence of ground operations to counter it. ISIS in Yemen will probably continue expanding its footprint in Yemen and may be able to shift the trajectory of the conflict rapidly through asymmetrical attacks.