Weapons sent to Yemen by the Saudi-led coalition may have been transferred to al Qaeda in the Arabian Peninsula (AQAP), according to local Yemeni reporting. The conflict in Yemen appears to be escalating despite U.S. efforts and despite Saudi hints at a ceasefire. 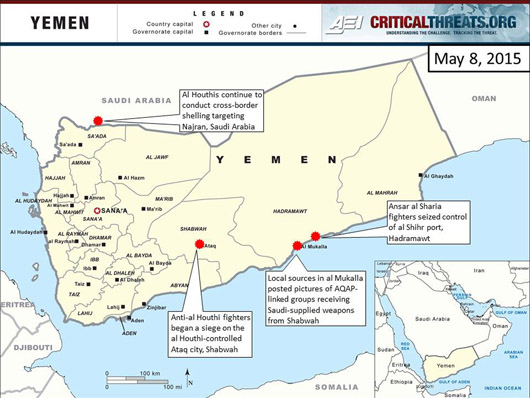 Weapons sent to Yemen by the Saudi-led coalition may have been transferred to al Qaeda in the Arabian Peninsula (AQAP), according to local Yemeni reporting. The conflict in Yemen appears to be escalating despite U.S. efforts and despite Saudi hints at a ceasefire.

AQAP may have received Saudi-supplied arms. Local Yemeni sources reported on May 7 that weapons supplied by the Saudi-led coalition to combat the al Houthis were shipped from the Balobayd tribe in Shabwah to the Hadramawt People’s Council (HPC) in al Mukalla, Hadramawt, eastern Yemen. The HPC is a joint council comprised of some tribes in Hadramawt and members of AQAP that oversees governance in the area around al Mukalla, which AQAP seized on April 2. If the HPC received the weapons, it is reasonable to infer that AQAP has access to them.  Anonymous U.S. defense officials and top White House aides have also expressed concerns that Saudi-supplied weapons are ending up in the hands of terrorists and that Saudi Arabia has not adequately vetted local anti-al Houthi fighters. AQAP has been able to exploit the conflict with the al Houthis to work with local tribes and consolidate control over territory in eastern Yemen. AQAP is actively battling the al Houthis in Shabwah, al Bayda, Abyan, and Ma’rib governorates in addition to its operating in Hadramawt.

Saudi Arabia continues bombing campaign despite promise of a ceasefire. Saudi-led coalition airstrikes targeted the al Houthi-stronghold of Sa’ada province in northern Yemen on May 8. Coalition spokesman Brigadier General Ahmed Asseri stated that airstrikes would continue to pound the al Houthis in Sa’ada after the al Houthis shelled Najran city in Saudi territory on May 7, the second such incident in one week. Saudi Arabia now considers Sa’ada a military target and has urged civilians to leave the governorate. The escalation in airstrikes came immediately after U.S. Secretary of State John Kerry visited Saudi Arabia on May 7.Saudi Foreign Minister Abdel al Jubeir stated that Saudi Arabia will implement a five-day ceasefire beginning on May 12.

AQAP confirmed the death of top cleric and senior al Qaeda official. AQAP released a video on May 7 of mid-level commander Khaled Batarfi eulogizing the death of Nasser bin Ali al Ansi, an AQAP senior official and one of al Qaeda’s deputy managers. Al Ansi was reportedly killed by an April 21 suspected U.S. airstrike in al Mukalla, Hadramawt. Al Ansi is the third senior AQAP official to be killed by a U.S. airstrike in 2015. Senior religious official Harith bin Ghazi al Nadhari was killed on January 31, and another senior religious leader, Ibrahim al Rubaish, was killed on April 12. The lack of an on-the-ground partner to combat AQAP’s expansion makes it unlikely that continued targeted airstrikes will have a significant effect on AQAP operations, apart from slowly degrading the group’s senior leadership.

Al Houthi attacks on Saudi Arabian territory will continue to escalate the current conflict and draw a significant response from Saudi Arabia. Saudi Arabia’s inadequate vetting of local fighters will likely continue to benefit AQAP, which is using the al Houthi conflict as a pretext to work with local tribes and expand its operating space.