The al Houthis fired mortar shells at civilian targets inside Saudi Arabia, the first time in the current conflict the al Houthis have appeared to target civilians. The attack is a significant escalation in violence in the current conflict and may result in a strong military response from Saudi Arabia. Al Qaeda in the Arabian Peninsula (AQAP) continues to take advantage of Yemen's security vacuum and has begun recruiting fighters in Hadramawt. 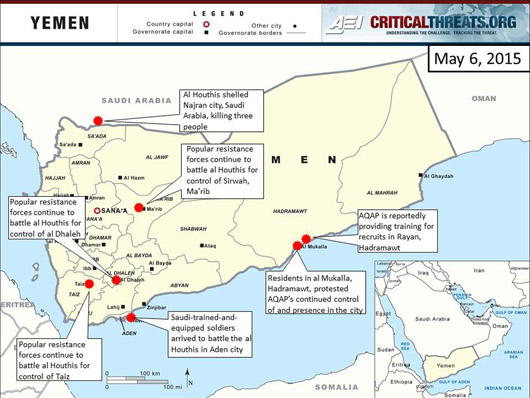 The al Houthis fired mortar shells at civilian targets inside Saudi Arabia, the first time in the current conflict the al Houthis have appeared to target civilians. The attack is a significant escalation in violence in the current conflict and may result in a strong military response from Saudi Arabia. Al Qaeda in the Arabian Peninsula (AQAP) continues to take advantage of Yemen’s security vacuum and has begun recruiting fighters in Hadramawt.

Al Houthi militants attacked civilian targets with mortar fire inside Saudi Arabia. Al Houthi militants fired mortars into Najran city, Saudi Arabia, on May 5 killing two Saudi citizens and one soldier. The al Houthi shells reportedly hit a hospital, a school, and a few private houses in the city. There are also unconfirmed reports that pro-al Houthi militants, including members from the Bakil al Meer tribe, attacked a total of four Saudi Border Guard posts in Jizan and Najran provinces and captured five Saudi soldiers. The attack on Najran came one day after Saudi Arabia began considering a temporary ceasefire in Yemen to allow for humanitarian relief in the country. The attack may cause Saudi-led operations in Yemen to escalate, decreasing the likelihood that the al Houthis and Saudi Arabia will agree on preconditions for negotiations in the near future.

AQAP is beginning to recruit fighters in al Mukalla, Hadramawt, eastern Yemen. A local source reported on May 1 that AQAP militants have begun recruiting youths in al Mukalla, Hadramawt, to train at the nearby camp of the 27th Mechanized Brigade, also in Hadramawt, which AQAP seized on April 16. The training includes instruction in combat, suicide bombing operations, and Islamic teaching from AQAP preachers. The Hadramawt Tribal Alliance stated that it would make no effort to seize control of institutions controlled by the Sons of Hadramawt, the name under which AQAP is operating in Hadramawt.

Local Hadhramis continue to protest AQAP’s continued presence in and control of al Mukalla. Citizens in al Mukalla, Hadramawt protested against continued AQAP presence in the city from May 2-4. The protests began after Ansar al Sharia militants attempted to arrest an Imam giving an anti-AQAP sermon in a mosque on May 1. The demonstrators rejected AQAP’s presence in Hadramawt, Khaled Batafari’s governance of al Mukalla, and also denounced the al Houthi movement. There have been no reports of violence between the protesters and Ansar al Sharia militants, although fighters have not withdrawn from al Mukalla. Citizens in Ghayl Ba Wazir had similarly protested against AQAP governance in Hadramawt on April 24. AQAP’s reaction to continued demonstrations will likely have an effect on the organization’s influence and operations in Hadramawt.

Saudi-trained soldiers are fighting the al Houthis in Aden.  A group of Saudi-trained-and-equipped Yemeni soldiers arrived in Aden city, Aden, on May 3 to reinforce popular resistance fighters battling al Houthi militants in the city. Reports from May 3 claimed that Saudi-led coalition troops had arrived in Aden, though these reports were denied by Saudi Arabia. Yemeni foreign minister Riyadh Yassin confirmed on May 4 that the new soldiers fighting the al Houthis in Aden were indeed Yemeni nationals trained by Saudi Arabia. Saudi Arabia has also trained anti-al Houthi tribesmen from Sirwah, Ma’rib.

Abdu Rabbu Mansour Hadi will hold a political conference in Saudi Arabia. Abdu Rabbu Mansour Hadi announced that he will hold a National Yemeni Dialogue conference in Riyadh, Saudi Arabia, on May 17. It is unlikely that either Ali Abdullah Saleh or the al Houthi movement will send representatives to the conference. Unconfirmed reporting states that members of Saleh’s party, the General People’s Congress (GPC), who have broken with Saleh will participate in the conference. Saleh appears to be losing support from GPC members, which may indicate that Saleh’s hold over his power base is eroding. It is possible that political defections from Saleh could lead to future military defections, which would greatly weaken the military capabilities of the al Houthi movement, which has been receiving support from Saleh-loyal military units.

Senegal sent troops to Saudi Arabia. Senegal announced on May 4 that it would send 2,100 soldiers to join the Saudi-led coalition against the al Houthis. The troops will reportedly be deployed to Saudi Arabia to help ensure the protection of the two holy sites, Mecca and Medina.  It is likely Senegal is seeking closer ties with Saudi Arabia, and it does not appear as of yet that Saudi Arabia is planning a ground invasion into Yemen.

The al Houthis’ attack on Najran city was likely in retaliation for continued Saudi-led airstrikes in Yemen. The al Houthis have continued to demand that Saudi Arabia cease airstrikes in Yemen as a precondition for negotiations, making it unlikely that any significant progress on the political front will emerge in the near future. While the conflict has allowed AQAP to operate freely in eastern Yemen, local demonstrations in al Mukalla will put pressure on AQAP to maintain its grip on al Mukalla without taking actions that could alienate local supporters.