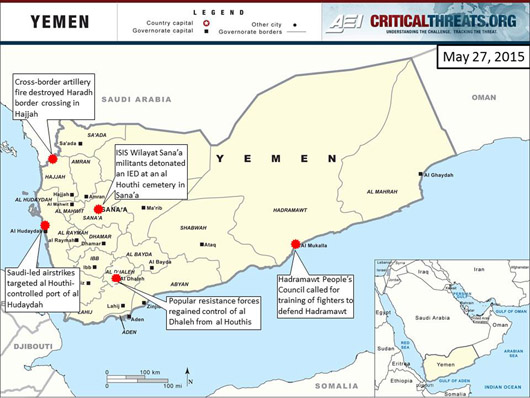 A senior Iranian general acknowledged that Yemenis have received Iranian training as al Houthis step up cross-border attacks on Saudi Arabia. Iranian Islamic Revolutionary Guards Corps (IRGC) Qods Force Deputy Commander Brigadier General Esmail Ghani stated at a ceremony for Iran-Iraq war veterans that the “defenders of Yemen” had been trained by Iranian forces, in what appears to be a reference to the al Houthis. Ghani’s acknowledgement is the first time an Iranian senior military official has publicly attested to providing military training to the al Houthis. Unconfirmed reports from March 2015 alleged that the IRGC had been training the al Houthis in Izraa and Bosra, towns in the southern Syria province of Deraa. The al Houthis continue to fire artillery into Saudi Arabian territory and destroyed the Haradh border crossing in northern Yemen on May 25. Video footage posted by the al Houthis also claimed that they have developed missiles with a range of approximately 75 kilometers, which could explain how they have been successfully attacking targets within Saudi Arabia.

Al Qaeda in the Arabian Peninsula (AQAP) and AQAP allies are undertaking recruiting efforts in Hadramawt. Local sources in Hadramawt reported on May 26 that Salafist leaders allied with AQAP held a meeting in al Mukalla calling for the recruitment of fighter to defend Hadramawt. The Hadramawt People’s Council (HPC), an al Mukalla-based group known to be associated with AQAP, also held a meeting discussing the training of fighters to defend Hadramawt and the opening of a military training facility on May 25. It is unclear if the two reports are referring to the same or separate meetings. Furthermore, a delegation of HPC leaders went to Saudi Arabia on May 16 to discuss the situation in al Mukalla. The council emphasized the need to unite Hadhramis and reported that it is trying to convince AQAP militants to allow the council and local government to retain control of state institutions. The meeting in Saudi Arabia raises concerns about Saudi Arabia’s seemingly lack of concern for the continued expansion of AQAP in southern and eastern Yemen.

Yemeni stakeholders refused to participate in planned UN-hosted talks in Geneva without conditions, forcing the UN to postpone the talks. UN Secretary General Ban Ki-moon confirmed that proposed political talks between Yemeni political factions have been postponed without giving a future date for the talks. The talks were scheduled for May 28 in Geneva. Abdu Rabbu Mansour Hadi’s government stated it would not attend the talks unless the al Houthis disarmed and withdrew from seized territory. The al Houthis have also demanded that Saudi Arabian airstrikes cease prior to any talks. The UN is continuing efforts to start a Yemen political dialogue, but the continued escalation of fighting on the ground in Yemen will likely derail international efforts to negotiate a political settlement between Yemen’s warring factions.

Pro-Islamic State in Iraq and al Sham (ISIS) militants carried out attacks in Yemen and Saudi Arabia. Pro-ISIS Wilayat Sana’a militants detonated an improvised explosive device (IED) targeting an al Houthi cemetery in Sana’a on May 22, wounding 13 people. ISIS militants also bombed a Shi’ite mosque in al Qatif, eastern Saudi Arabia, on the same day. Pro-ISIS group Wilayat Najd claimed credit for the attack, the first time a Saudi ISIS branch has claimed responsibility for an attack inside Saudi Arabia. The attacks were possibly coordinated and were probably designed to inflame sectarian tensions in the Arabian Peninsula. ISIS previously carried out simultaneous suicide attacks on Zaydi mosques in Sana’a on March 20, which killed over 130.

International efforts to bring Hadi’s government and the al Houthis to the negotiating table will likely continue to flounder as long as either side demands preconditions that are unacceptable to the other. Continued escalatory attacks from the al Houthis on Saudi Arabian territory will also further increase tensions, making it unlikely a political settlement or ceasefire will be reached soon. The protraction of the crisis in Yemen will benefit AQAP, particularly in areas not affected directly by the fighting like Hadramawt.