The United Nations announced that it will host Yemeni political talks in Geneva on May 28 and encouraged all parties in the Yemen conflict to participate without preconditions. The talks would be the first resumption of inclusive dialogue since the start of Saudi airstrikes in Yemen. Both the al Houthis and Abdu Rabbu Mansour Hadi's government signaled they would have conditions for participation. 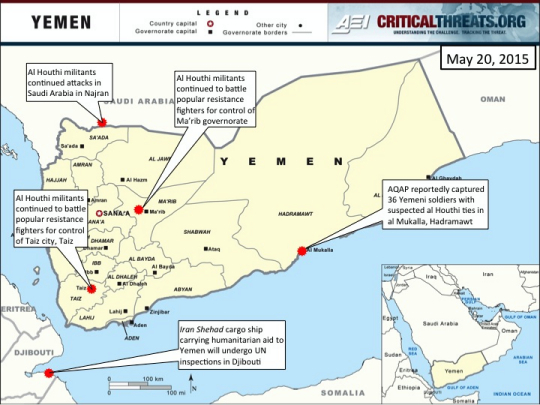 The United Nations announced that it will host Yemeni political talks in Geneva on May 28 and encouraged all parties in the Yemen conflict to participate without preconditions. The talks would be the first resumption of inclusive dialogue since the start of Saudi airstrikes in Yemen. Both the al Houthis and Abdu Rabbu Mansour Hadi’s government signaled they would have conditions for participation.

The UN will host political talks in Geneva on May 28, but key Yemeni stakeholders may not attend. The May 20 UN statement announcing political talks encouraged all groups to join the talks without preconditions. Abdu Rabbu Mansour Hadi’s government indicated it may refuse to participate because it did not receive an official invitation and because the al Houthis have not followed UN Resolution 2216, which calls for disarmament and withdrawal from the capital, Sana’a. Hadi hosted a Yemeni political dialogue conference in Riyadh, Saudi Arabia, from May 17-19, that General People’s Congress (GPC) leadership attended but the al Houthi movement boycotted. Resolutions from the conference called for the delivery of weapons and logistical support to anti-al Houthi fighters in Yemen and for the creation of a ground-based Arab peacekeeping force to secure major Yemeni cities from the al Houthi movement.

Al Houthi leader Abdul Malik al Houthi called for expanded military recruitment in a May 20 televised speech. Abdul Malik al Houthi gave his first televised address in over a month characterizing the al Houthis’ fight as against al Qaeda, which he sees as being supported by the Saudi-led coalition airstrikes. He said that the Yemeni military should accept new recruits in the face of the campaign against it. He also supported a UN-sponsored dialogue in a neutral country based on the September 2014 Peace and National Partnership Agreement. Earlier in the day, al Houthi-linked forces attacked Saudi Arabian military locations in both Najran and Jizan provinces. Al Houthis reportedly attacked a Saudi Arabian border post on May 18 and fired mortars at Abdul Raeef village in Najran, Saudi Arabia, on May 15. The five-day humanitarian ceasefire between Saudi Arabia and the al Houthi movement ended on May 17. The al Houthi movement reportedly moved missile-launching systems to the Saudi Arabian-Yemeni border during the ceasefire.

The Iranian cargo ship reported to be carrying humanitarian aid for Yemen continues its voyage to the al Houthi-controlled al Hudaydah port in Yemen. The Iran Shahed is expected to arrive at al Hudaydah port on May 21. The Iranian ship will submit to third-party inspections in Djibouti, after refusing to undergo inspections by members of the Saudi-led coalition or the United States. The Iran Shahed arrived in the Gulf of Aden on May 17, and Iranian state media announced on May 18 that the cargo ship met up with a military escort from the Iranian Artesh Navy’s 34th Fleet. Pentagon spokesman Steve Warren confirmed this report on May 19.

The UN-sponsored talks in Geneva could be significant if both the al Houthi movement and Hadi’s government-in-exile attend; however, it is not clear that all key stakeholders will be invited to participate in the talks, and neither Hadi nor the al Houthis appear willing to make concessions to the other side at the moment. Saudi-led coalition airstrikes and Yemeni popular resistance forces will probably have a limited effect on the al Houthi movement’s strength.