A tenuous May 12 ceasefire in Yemen holds, though limited clashes between the al Houthis and local Yemeni militias supported by Saudi-led airstrikes have continued. Separately, an Iranian cargo ship heading to Yemen refused to submit to inspections, increasing tensions between Iran and Saudi Arabia and the U.S. 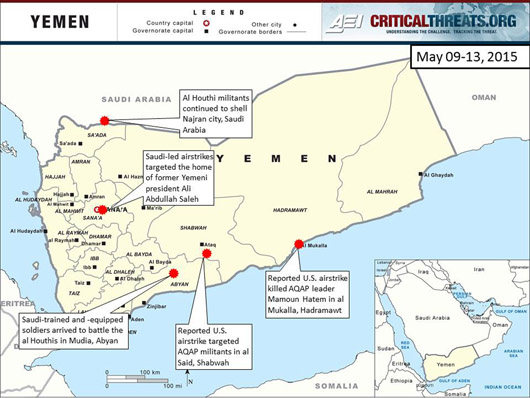 A tenuous May 12 ceasefire in Yemen holds, though limited clashes between the al Houthis and local Yemeni militias supported by Saudi-led airstrikes have continued. Separately, an Iranian cargo ship heading to Yemen refused to submit to inspections, increasing tensions between Iran and Saudi Arabia and the U.S.

An Iranian cargo ship destined for Yemen is refusing inspections. Iran sent a cargo ship reported to be carrying humanitarian aid to the al Houthi-controlled port of al Hudaydah on May 11 and announced the following day that warships from the Iranian 34th Fleet, currently deployed in the Gulf of Aden, would accompany the cargo ship. An Iranian foreign ministry spokesperson confirmed on May 13 that the cargo ship will refuse to allow any nations participating in the Yemen conflict to inspect the ship. Iran has also ignored calls from the U.S. to redirect the cargo ship to Djibouti, from where the UN is directing humanitarian aid relief and distribution. The American or Saudi-led coalition’s response, should the Iranian ship refuse to allow inspections or change course away from al Hudaydah port, is uncertain.

Al Qaeda in the Arabian Peninsula (AQAP) surrendered direct control of infrastructure in al Mukalla to the Hadhrami People’s Council (HPC), a local pro-AQAP governing council. AQAP militants delivered control of al Mukalla seaport to the HPC on May 10. The HPC was established on April 11 by AQAP and local pro-AQAP tribes to govern al Mukalla after AQAP’s April 2 seizure of the city. AQAP had likewise delivered control of al Riyan International Airport and al Mukalla Central Bank to the HPC on May 7. AQAP’s decision to delegate control to the HPC may have been influenced by widespread anti-AQAP protests in al Mukalla from May 2-8.

Former Yemeni President Ali Abdullah Saleh formally announced his alliance with the al Houthis. Saudi-led airstrikes targeted the home of former Yemeni president Ali Abdullah Saleh in the capital, Sana’a, on May 10. Saleh responded by announcing his support for the al Houthi movement and describing them as defenders of Yemen, though he continued to deny any previous affiliation with the movement. Al Houthi leader Abdul Malik al Houthi condemned the Saudi attack on Saleh and expressed solidarity with him. Previous reports had indicated that Saleh was willing to turn against the al Houthi movement in return for immunity. The leadership of the General People’s Congress (GPC), the ruling political party in Yemen formed by and historically loyal to Saleh, reportedly rejected Saleh’s declaration. GPC leaders will meet in Cairo, Egypt, to discuss whether or not to withdraw party backing from Saleh. There have been previous indications that Saleh’s support base in Yemen is beginning to erode.

The current ceasefire in Yemen is fragile, though it may open up space for dialogue among key Yemeni political actors, including the al Houthis. The Iranian cargo ship headed to al Hudaydah port may probe American and Saudi Arabian resolve to limit Iran’s influence in Yemen and could also affect the ceasefire. AQAP has continued to benefit from the current instability in Yemen by expanding and consolidating its control in the eastern parts of the country despite continued U.S. targeted airstrikes.