Yemen's ongoing crisis with the al Houthis is allowing pro-Islamic State in Iraq and al Sham (ISIS) cells to emerge throughout the country. A pro-ISIS group in Yemen attacked Yemeni security forces in Hadramawt, eastern Yemen, where al Qaeda in the Arabian Peninsula (AQAP) is known to have a strong presence. Pro-ISIS groups in Yemen have so far carried out attacks in territory with strong al Houthi influence and have not before attacked in Hadramawt. 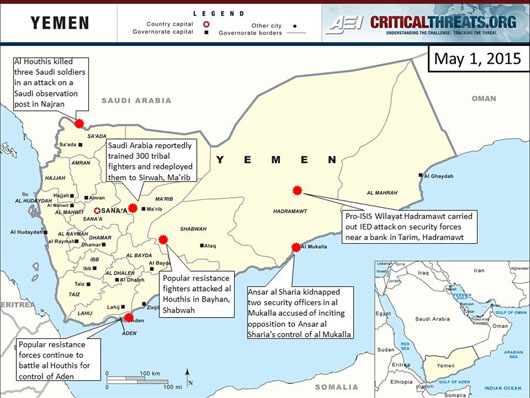 Yemen’s ongoing crisis with the al Houthis is allowing pro-Islamic State in Iraq and al Sham (ISIS) cells to emerge throughout the country. A pro-ISIS group in Yemen attacked Yemeni security forces in Hadramawt, eastern Yemen, where al Qaeda in the Arabian Peninsula (AQAP) is known to have a strong presence. Pro-ISIS groups in Yemen have so far carried out attacks in territory with strong al Houthi influence and have not before attacked in Hadramawt.

Pro-ISIS fighters appear to have expanded operations into Yemen’s eastern Hadramawt governorate. A pro-ISIS group calling itself Wilayat Hadramawt attacked local security forces near a bank in Tarim, Hadramawt, eastern Yemen, on April 30. The attack is the first known ISIS-linked attack in Hadramawt, where AQAP has a strong presence. Separately, a pro-ISIS group calling itself Wilayat Shabwah released a graphic video detailing the beheadings and executions of al Houthis and Yemeni soldiers (source available upon request). One of the executions depicted was of 14 Yemeni soldiers from the 2nd Mountain Infantry Brigade, who were believed killed in mid-April. The extent of ISIS’s presence in Yemen is still unclear, and it is unknown if different pro-ISIS groups are cooperating with each other or are operating independently. Pro-ISIS groups in Yemen have hitherto largely operated along the front lines of the conflict with the al Houthis. The emergence of such groups in territory with a strong AQAP presence may presage conflict between the two organizations.

Saudi Arabia is seeking to strengthen local forces capable of combatting the al Houthis. An anonymous military source told Reuters that Saudi Arabia is providing military training for tribesmen from Yemen’s Ma’rib governorate to fight the al Houthis. The source alleged that approximately 300 tribal fighters trained in Saudi Arabia before being deployed back to Sirwah, western Ma’rib, where fighting has been ongoing with the al Houthis. Saudi Arabia’s Operation Restoring Hope spokesman, Brigadier Ahmed Asseri, did not deny the allegation when asked by a reporter. A separate Yemeni source stated that Saudi Arabia is attempting to unite tribal forces in Yemen to combat the al Houthis and is also discussing how to remove AQAP militants from the city of Sayun, Hadramawt, eastern Yemen, in order to establish a future base for a Yemeni government. It seems that the Saudis and AQAP are now in a competition for the loyalty or, at least, support of Yemeni tribes.

AQAP is continuing to expand governance activities in seized territory in eastern Yemen. A YouTube video posted on April 30 showed unidentified members from the Sons of Hadramawt stating that the organization is working to resolve electricity issues in al Shihr, Hadramawt, east of al Mukalla (source available upon request). The members also urge residents to reach out to the group to indicate what social services they need. The AQAP group operating around Mukalla is called the “Sons of Hadramawt” and is led by Khaled Batarfi.  The degree to which the local population accepts AQAP services and de facto governance will be a key indicator of the depth of local toleration or support for the al Qaeda affiliate.

Al Houthis killed Saudi soldiers along the Saudi-Yemeni border. Al Houthi militants attacked a Saudi Arabian observation post in Najran, Saudi Arabia, along Yemen’s northern border, on May 1 but were repulsed, killing three Saudi soldiers in the attack. The attack comes as the al Houthis battle anti-al Houthi forces supported by Saudi-led airstrikes for control of Aden, southern Yemen. Reporting from the city indicates that many residents are running out of food and water. Anti-al Houthi forces have been unable to make significant gains against the al Houthis in Aden, despite the airstrikes.

U.S. reportedly seeks Iranian help in bringing al Houthis to the negotiating table despite increasing tensions in the Gulf of Aden. Anonymous U.S. State Department officials alleged U.S. Secretary of State John Kerry asked his Iranian counterpart, Javad Zarif, during an April 27 meeting for Tehran to use its influence to bring Yemen’s warring factions to political negotiations. The Saudi-led military campaign against the al Houthis has so far failed to pressure the al Houthis into negotiations. Separately, Iranian naval chief Rear Admiral Habibollah Sayyari stated that the Artesh’s 34th Fleet is conducting patrols in the Bab al Mandab Strait, off Yemen’s coast.

Saudi Arabia’s recent royal reshuffle may have been partially affected by the military campaign in Yemen. Saudi King Salman bin Abdulaziz al Saud named Prince Mohammed bin Nayef as crown prince on April 29, replacing Prince Muqrin bin Abdulaziz. King Salman also named current defense minister (and his son), Prince Mohammed bin Salman, as deputy crown prince.  Mohammad bin Salman has been a prominent and public supporter of Saudi Arabia’s actions in Yemen. Some political analysts have suggested that the decision to replace Muqrin was partially due to his opposition to the Saudi-led military campaign against the al Houthis in Yemen. It is possible that King Salman is trying to project a more unified and stronger foreign policy as fears of growing Iranian interference in Yemen increase, although the changes also accomplish other important dynastic objectives in the complex internal struggle among powerful factions within the Saudi royal family for long-term succession.

The al Houthis’ deadly attack on a Saudi border post was likely in retaliation for continued Saudi-led airstrikes throughout Yemen and signals that the group is unlikely to take part in negotiations as long as Saudi Arabia’s military campaign continues. The fight against AQAP and emerging ISIS groups in Yemen will suffer as both are given free rein to expand and carry out attacks. Saudi Arabia may have to compete with AQAP for tribal loyalty and will most likely be at a disadvantage relative to AQAP, which has stronger, local ties in Yemen.