Yemen's fragmentation continues as President Abdu Rabbu Mansour Hadi works to solidify his tenuous grip on power in Aden. The al Houthis, who have established de facto control of sections of northern Yemen, are confronting opposition from tribes and al Qaeda in the Arabian Peninsula (AQAP) militants in southern al Bayda. 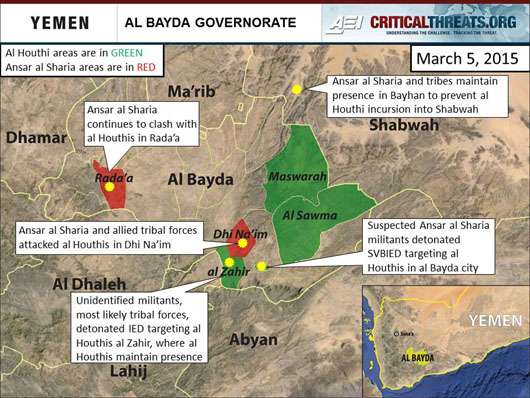 Yemen’s fragmentation continues as President Abdu Rabbu Mansour Hadi works to solidify his tenuous grip on power in Aden. The al Houthis, who have established de facto control of sections of northern Yemen, are confronting opposition from tribes and al Qaeda in the Arabian Peninsula (AQAP) militants in southern al Bayda.

President Hadi contends with al Houthi loyalists in Aden to maintain power. President Hadi attempted to appoint Thabit Mathna Naji Jawas, a military general who defected in 2011 from Ali Abdullah Saleh’s regime, as commander of the Special Security Forces (SSF) in Aden on March 4. The current commander of the SSF in Aden, Abdul Hafiz al Saqqaf, is an alleged al Houthi supporter and was reportedly preparing forces to act against Hadi. Al Saqqaf refused to give up his post. Al Saqqaf previously attempted to dissolve Hadi-loyal militias from Aden on February 15.

Iran carried out a military special operation to free a kidnapped Iranian diplomat. Iran stated on March 5 that a special operations team freed Iranian diplomat Ahmad Nour Nikbakhat. Unidentified gunmen had kidnapped Nikbakhat in July 2013 in the Yemeni capital, Sana’a. The location of the Iranian operation to free Nikbakhat is unknown. The operation comes a few days after an al Houthi delegation went to Tehran and is an indication of increasing Iranian-al Houthi ties, as well as of Iran’s increasing willingness and ability to project military power in the region generally and in Yemen in particular.

UN Special Envoy to Yemen Jamal Benomar continues to engage in talks with al Houthis in Sana’a. Benomar briefed the UN Security Council on March 4 and stated that progress is being made, but warned that extremists in different political factions could derail negotiations. President Hadi demanded that UN talks be moved to Riyadh in Saudi Arabia, a move which was rejected by the al Houthis and Hadi’s former party, the General People’s Congress (GPC). It is unlikely the talks will result in an acceptable political solution as the al Houthis and Hadi entrench their respective holds on power.

A small pro-Islamic State of Iraq and al Sham (ISIS) presence in Yemen may be emerging and attempting to compete with AQAP. A group calling itself Wilayat (province) Shabwah released a statement on February 25, affirming its support for ISIS’s caliphate. Another group released a similar statement in Aden on February 24. Separately, a low-level AQAP Twitter account released a statement on March 3 alleging that ISIS supporters contacted AQAP following AQAP’s February 12 seizure of the 19th Infantry Brigade base in Shabwah and asked for a share of weapons looted from the base. The statement also claimed that ISIS supporters attacked a checkpoint in al Jawf on February 28, although this claim could not be verified. It is unlikely that ISIS supporters will be able to gain wide support in Yemen or develop operational superiority to AQAP.

The U.S. refused to take a firm position on supporting Hadi’s rival claim to power. U.S. Ambassador to Yemen Matthew Tueller visited President Hadi on March 2 in Aden. Ambassador Tueller affirmed America’s support for Hadi as Yemen’s legitimate president. U.S. officials later stated on March 3 that Ambassador Tueller will work from Jeddah, Saudi Arabia and that the U.S. embassy will not reopen in Yemen so as not to signal support for Yemen’s potential division.

It is unclear if President Hadi will be able to remain in power in Aden given that he will have to contend with various local factions who oppose his presence and government. The al Houthis’ continued expansion and presence in southern al Bayda will likely push local tribal support to AQAP, giving the group greater operational capacity in southern Yemen.