An international coalition led by Saudi Arabia began airstrikes against al Houthi positions in Yemen in order to reinstall Abdu Rabbu Mansour Hadi's government. The entrance of Gulf and Arab nations' militaries into the conflict significantly escalates the risk that the Yemen crisis will become a regional war. 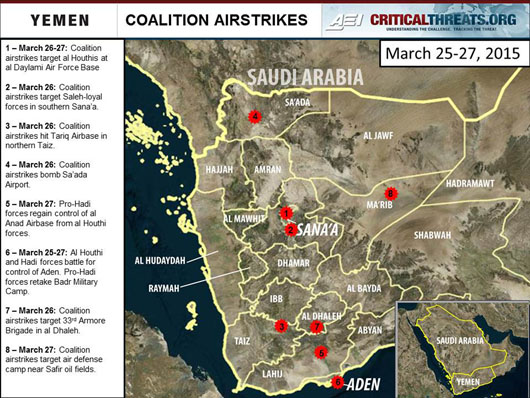 An international coalition led by Saudi Arabia began airstrikes against al Houthi positions in Yemen in order to reinstall Abdu Rabbu Mansour Hadi’s government. The entrance of Gulf and Arab nations’ militaries into the conflict significantly escalates the risk that the Yemen crisis will become a regional war.

Saudi Arabia and allied forces undertake air operations against al Houthis and may begin ground invasion in Yemen. Egyptian military and security officials stated on March 26 that Saudi Arabian and Egyptian forces would undertake a ground invasion in Yemen, although a Saudi Arabian military spokesman later said ground operations would only commence if needed. Fighter jets from Saudi Arabia and Arab allies bombed Yemen’s capital, Sana’a, on March 26. Targets included al Daylami Air Force Base  in Sana’a city and a military camp in the south of the city that is reportedly home to troops loyal to former President Ali Abdullah Saleh. There are rumors that three top al Houthi military commanders, Abdul Khaliq al Houthi, Yusuf al Madani, and Yusuf al Fishi, were killed. Airstrikes continue and have hit al Houthi positions in the capital, Tariq Air Base in Taiz, suspected weapons depots and the airport in Sa’ada, an air defense base in Ma’rib, and the 33rd Armored Brigade in al Dhaleh. The 35th Armored Brigade defected from its commander, a reported Saleh loyalist, and declared its support for Hadi.

U.S. provides logistical and intelligence support for the Saudi-led operation, “Decisive Storm.” The White House stated that the U.S. is providing logistical and intelligence support to the Saudi-formed coalition to prevent the al Houthis from taking over Yemen and defend the “legitimate government of Yemen.” The coalition includes forces from the United Arab Emirates, Jordan, Qatar, Bahrain, Kuwait, Morocco, Sudan, and Egypt. Pakistan stated that it will protect the territorial integrity of Saudi Arabia, but will not partake in a conflict that “could result in differences in the Muslim world.” Arab League members are expected to discuss the formation of a joint military force on March 28 in a summit at Sharm al Sheikh, Egypt.

Al Houthis vowed strong retaliation for Saudi airstrikes. Al Houthi leader Abdul Malik al Houthi condemned Saudi Arabian military operations in Yemen during a televised address on March 26. Abdul Malik accused Saudi Arabia of working in American and Israeli interests and called for a mobilization against Saudi Arabia. Al Houthi political leader Ali al Imad alleged that al Houthi fighters fired a missile into Saudi territory on March 26, although this report could not be independently verified. Another al Houthi political leader, Mohammed al Bukhaiti, stated that the Saudi intervention in Yemen will be the “end” of the Saudi regime.  It is unclear whether the al Houthis will undertake further attacks on Saudi territory. The al Houthis temporarily held positions inside Saudi Arabian territory during the 2009-2010 Sa’ada War.  Iran publicly condemned the Saudi Arabian military operations in Yemen, but it is unclear whether Iran will move additional assets to assist the al Houthis. Unverified reports state that Egyptian naval forces forced Iranian warships to retreat from the Bab al Mandeb straight, although this claim could not be verified.

Islamic State in Iraq and al Sham (ISIS) cells are beginning to emerge in Lahij and Aden, southern Yemen. Wilayat Sana’a, an ISIS-affiliated group responsible for the March 20 mosque bombings in Sana’a, revealed the names and histories of the militants who carried out the suicide attacks. At least three of the fighters came from Ibb in central Yemen, indicating the possible presence of an ISIS recruiting cell in the governorate. ISIS supporters in Lahij, calling themselves Wilayat Lahij, posted photos of slain fighters via Twitter on March 25. Pro-ISIS Twitter accounts also started distributing photos of graphic executions of al Houthi militants in Lahij and Aden on March 25 and 26. It is possible, though unclear, that some al Qaeda in the Arabian Peninsula (AQAP) militants defected to ISIS. AQAP’s media presence over the past week has been limited.

The entrance of Saudi Arabia and other Sunni nations into the Yemeni conflict against the Zaydi Shia al Houthis may further drive sectarianism in the region. The fight against the al Houthis distracts from the one against AQAP, and now ISIS, who will be able to take advantage of the deteriorated security conditions.