The al Houthis and allied military forces seized a strategic military base directly north of Aden from which U.S. troops withdrew days earlier. The al Houthi move is an attempt to force President Abdu Rabbu Mansour Hadi to surrender or flee Aden, where Hadi has based his rival government. 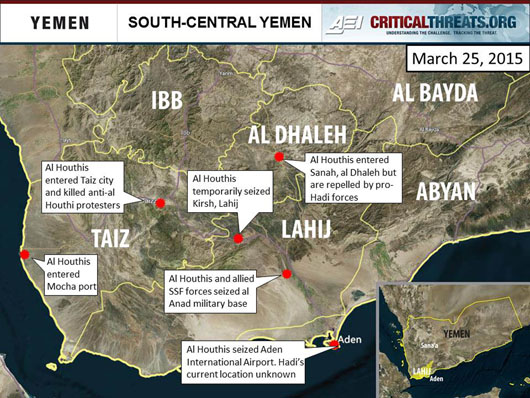 The al Houthis and allied military forces seized a strategic military base directly north of Aden from which U.S. troops withdrew days earlier. The al Houthi move is an attempt to force President Abdu Rabbu Mansour Hadi to surrender or flee Aden, where Hadi has based his rival government. Saudi Arabia may have already facilitated Hadi’s flight from Aden and earlier deployed military units along its border with Yemen.

Abdu Rabbu Mansour Hadi, recognized by the U.S. as the legitimate Yemeni president, may have fled the country after al Houthi militants closed in on Aden. Al Houthi militants and allied Special Security Forces (SSF) seized al Anad Airbase, in addition to Lahij’s capital, Hawta, on March 25. U.S. Special Forces were operating out of al Anad prior to their evacuation earlier this week. They also reportedly captured Hadi’s Minister of Defense, Mahmoud al Subaihi. There are reports that forces loyal to the al Houthis also seized Aden International Airport, which had been closed, as well as the city’s central bank. Hadi’s current whereabouts are unknown.

Gulf States may be contemplating military intervention in Yemen. Saudi Arabia deployed artillery and armored forces to its border with Yemen on March 25. U.S. officials stated it was not clear whether the deployment was defensive or offensive in nature. Saudi Arabia previously fought the al Houthis in the Sa’ada Wars in 2009-2010. The Arab League announced that it would discuss a proposal by Hadi’s foreign minister calling for military intervention in Yemen in a session to be held on March 26. Arab diplomats began leaving Aden on March 25 following the al Houthis’ advance on al Anad Airbase.

Al Houthis solidify control of Taiz governorate and crack down on anti-al Houthi protesters.  Al Houthis and loyal security forces began entering Taiz city on March 20 and were in control of parts of the city by March 22.  Hundreds of protesters have set up camps to protest the al Houthis in the city. Protesters burned down an al Houthi camp in the city and seized control of a police station on March 24.  That same day, al Houthi gunmen killed four demonstrators, but it’s unclear whether their actions were in response to the protesters’ actions. Taiz is Yemen’s third-largest city and was the heart of the 2011 Arab Spring protests that led to the resignation of former President Ali Abdullah Saleh. Al Houthis also entered Mocha, a port city on the Red Sea in Taiz, on March 24, in what was likely an effort to secure the highway there leading to Aden.

Al Qaeda in the Arabian Peninsula’s (AQAP) insurgent arm continues to battle al Houthis in al Bayda and may be moving into al Dhaleh. Unconfirmed reporting indicates that AQAP began moving fighters on March 23 into al Dhaleh, neighboring al Bayda, possibly in an effort to confront al Houthi expansion into the governorate. The al Houthis began moving into parts of al Dhaleh on March 24 and 25 in order to facilitate their southward offensive. Separately, Ansar al Sharia alleged that it had killed a large number of al Houthi militants on March 21 in an attack in Dhi Khalib, northern al Bayda. Al Houthi militants also fought with tribesmen reportedly backed by Ansar al Sharia in al Zahir district on March 22-23. AQAP may be looking to expand its presence through al Bayda and al Dhaleh in an effort to confront al Houthi expansion southward.

The al Houthis’ entrance into southern Yemen is a significant escalation and may provoke more direct engagement from the Gulf States. The advance toward civil war may draw military forces loyal to Hadi from fighting AQAP in eastern governorates away, giving the militant group more operating room there. Al Houthi expansion will likely continue to drive anti-al Houthi tribes in al Bayda and Shabwah to work with AQAP.