The United States announced it is withdrawing all remaining personnel from Yemen, citing the security conditions. Al Houthis and Abdu Rabbu Mansour Hadi are beginning to draw battle lines in what looks like a fledgling civil war in Yemen. 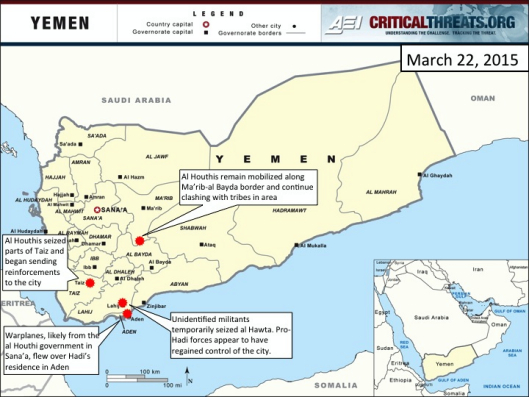 Dan O’Keefe and Kais Makhlouf contributed to the research for this post.

The United States announced it is withdrawing all remaining personnel from Yemen, citing the security conditions. Al Houthis and Abdu Rabbu Mansour Hadi are beginning to draw battle lines in what looks like a fledgling civil war in Yemen. The al Houthis have mobilized forces south of Sana’a in Taiz, while Hadi appears to have sent loyal military units north of Aden, where he has based his rival government.

The U.S. withdrew remaining personnel, including Special Operations Forces, from Yemen. The U.S. announced the evacuation of all remaining personnel from Yemen on March 21 due to the deteriorating security situation. The Islamic State in Iraq and al Sham (ISIS) claimed an attack on March 20 that killed over 130 people in Sana’a. The evacuation included about 100 U.S. Special Operations Forces stationed at the al Anad Airbase in Lahij governorate. A State Department press release noted that the U.S. will continue to “take action to disrupt continuing, imminent threats to the United States” and urged Yemeni factions to engage in talks for political resolution.

Al Houthis mobilize loyal military forces. The al Houthi Supreme Revolutionary Committee, the body that has effectively been governing northern Yemen since late January, called for a general mobilization of the military to confront “terrorism” on March 21. An unidentified fighter jet, likely from Sana’a, attempted to attack Hadi’s compound in Aden, the third such incident in the past four days. Hadi demanded the al Houthis leave Sana’a and put down their weapons. The al Houthi call to arms and mobilization of forces will likely escalate the current conflict and result in both Hadi and al Houthi forces drawing battle lines in southern Yemen.

Al Houthis and loyal security forces seize parts of Taiz, Yemen’s third largest city, and position forces on road between Sana’a and Aden. Special Security Forces (SSF) and al Houthi militias deployed from Sana’a to Taiz city on March 20. Additional reinforcements were reportedly sent to Taiz on March 21. Large anti-al Houthi protests broke out in Taiz on March 21, on which the al Houthis used force to disperse. By March 22, the al Houthis were in control of the city and had also seized the international airport there. Unconfirmed reporting indicates that al Houthi forces began moving farther south toward the Taiz-Lahij border. The movement of forces could indicate that the al Houthis are trying to secure Taiz governorate from pro-Hadi forces. The al Houthis also continue to retain a force presence along the Ma’rib-al Bayda border, southeast of Sana’a.

Unidentified militants temporarily seized al Hawta city in Lahij. Unidentified militants, possibly Ansar al Sharia, entered al Hawta on March 20 and temporarily seized control of the city. It has also been suggested that pro-Hadi militias were responsible for the seizure of the city, although this claim could not be verified.  Gunmen also looted banks, government buildings, and the SSF headquarters in the city. Unconfirmed reporting indicates that that the gunmen executed 29 soldiers belonging to the SSF. Military reinforcements, reportedly sent by Hadi, retook control of the city on March 21 after the withdrawal of the militants.

International actors scramble to find political solution to crisis. UN Special Envoy to Yemen Jamal Benomar, who has been trying to negotiate a political settlement for the past three months, left Yemen on March 21for an emergency UN Security Council meeting on March 22 to discuss Yemen’s escalating crisis. Gulf Cooperation Council (GCC) members also met in Riyadh, Saudi Arabia, on March 21 and warned of the impact Yemen’s situation could have on the rest of the region. The continued mobilization of al Houthi and Hadi forces makes it increasingly unlikely outside actors will be able to negotiate a political settlement.

The full evacuation of U.S. personnel from Yemen is a huge setback for U.S. counterterrorism efforts against AQAP. The continued escalation of Yemen’s crisis will further distract from Yemen’s fight against the terrorist group. Yemeni military forces may be drawn away from the fight against AQAP to fighting what could become a prolonged conflict between the al Houthi and Hadi rival governments.