The Islamic State in Iraq and al Sham bombed two Zaydi mosques frequented by al Houthis in the capital, Sana'a, killing over 77 people. The attack was likely designed to inflame sectarian tensions in Yemen. 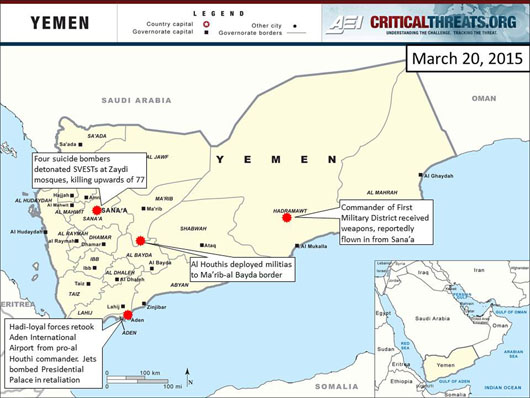 Dan O'Keefe contributed to the research for this post.

The Islamic State in Iraq and al Sham (ISIS) bombed two Zaydi mosques frequented by al Houthis in the capital, Sana’a, killing over 77 people. The attack was likely designed to inflame sectarian tensions in Yemen. Separately, fighter jets, most likely at the direction of the al Houthi-controlled government in Sana’a, bombed the Presidential Palace in Aden, targeting Abdu Rabbu Mansour Hadi. Hadi survived, but the use of air power is a significant inflection in the al Houthi-Hadi battle for control of the country.

Suicide bombers killed upwards of 77 Zaydi worshipers in simultaneous mosque bombings. ISIS detonated separate suicide vests (SVEST) at two Zaydi mosques in the capital, Sana’a, during Friday prayers. At one of the mosques, a suicide bomber entered the crowd of worshipers before detonating and the second bomber detonated as worshipers were fleeing. The blast killed 77 people and injured over 120 others. Another suicide bomber attempted to detonate an SVEST at a Zaydi mosque in Sa’ada city, Sa’ada also on March 20. The bomber was detained by al Houthi security forces but managed to detonate his bomb later while in custody, killing an unspecified number of people. ISIS claimed credit for the attack in Yemen under the name of “Wilayat Sana’a.” This is the first ISIS-claimed attack in Yemen, which was clearly designed to drive the growing sectarian conflict in Yemen.

Fighter jets reportedly from the al Houthi-controlled Air Force attacked Hadi’s Presidential Palace in Aden. An unidentified fighter jet bombed the Presidential Palace in Aden, where Hadi is reportedly stationed, on March 19 following clashes at Aden International Airport. Aden residents stated that anti-aircraft guns fired on the attacking jet.  Hadi was unharmed, and the palace remains in his control. Local residents in Sana’a also said that they had seen an unusual amount of military aircraft flying, indicating that the jets may have originated in Sana’a. The al Houthis earlier this week replaced the head of Yemen’s Air Force with a supposed al Houthi-loyalist.

Al Houthi militias deployed along the Ma’rib-al Bayda border on March 19, causing fears that they will attempt to secure the oil infrastructure in Ma’rib governorate. Al Houthis reportedly deployed around 30 military patrols along the al Bayda-Ma’rib border and clashed with tribal militants in Qaniyah on March 19. A Yemeni source alleged that a tribal sheikh loyal to former President Saleh had set up checkpoints along the border over the past few days to facilitate al Houthi movement. Al Houthis also set up checkpoints throughout the capital of al Bayda on March 19. The al Houthis have been fighting with tribal militants allied with AQAP’s insurgent arm, Ansar al Sharia, around al Bayda city for the past month. The al Houthis’ position along the Ma’rib border may drive anti-al Houthi tribes in the area to work further with Ansar al Sharia.

Pro-al Houthi forces in Sana’a may be seeking to gain control of Hadramawt governorate in eastern Yemen. Unconfirmed reporting indicates that the Commander of the First Military District and Saleh-loyalist, Abdul Rahman al Halili, may be stockpiling weapons. Weapons from the al Houthi-controlled capital, Sana’a, were reportedly flown to the First Military District headquarters in Sayun, Hadramawt, where al Halili is stationed. The governor of Hadramawt met with Hadi earlier this week to express his concerns about al Halili’s intentions, according to an anonymous security source. Al Halili attended the al Houthis’ February 6 Constitutional Declaration, which solidified the group’s control over the Yemeni central government.

ISIS’s expansion into Yemen will further fuel the growing sectarian conflict. The al Houthis’ continued attempts to expand will likely drive tribal support to AQAP, which will continue to use its military capabilities to both target the al Houthis and support the local population’s fight.